The following event took place in 1992 in the city of Coimbatore in South India, and it involves the mystical appearance of Srila Prabhupada, who entered samadhi on November 14, 1977 in Vrindavana, India. The first account is given by Mr. Kannan, in whose house the appearance of Srila Prabhupada took place. The second account is given by his wife, Purnima. Mr. Kannan is a disciple of Swami Shantananda, the guru of the ‘Shiva Family’, a religious organization based in South India. His guru, Swami Shantananda, is a direct disciple of Swami Shivananda, the founder of the Divine Life Mission. ‘Hare Krishna swamiji’ is a disciple of Srila Prabhupada to whom the vision occured.

Hare Krishna swamiji is very close to our swamiji (Swami Shantananda, the guru of the Shiva Family group, disciple of Swami Shivananda – the founder of the Divine Life Society). It was our privilege to host him at our house when he came to Coimbatore from Mayapur. We the Shiva Family at Coimbatore compete to get Hare Krishna swamiji as our guest. When he was about to shift headquarters to Coimbatore, he stayed in our house for a week. He read from Lord Chaitanya’s pastimes to an intimate gathering every evening for three hourse, explaining in chaste Tamil the Bengali scripture, keeping the audience spell bound. Apart from this the whole morning from 3:30 a.m. he was chanting so loudly in a samadhi mood on his beads – Hare Krishna, Hare Rama.

During his previous visits he used to spend a lot of time talking with me, playing with my son, etc. This visit it seemed he was fully in contemplation and mantra meditation. Hearing his descriptions of Prabhupada Swamiji’s lilas, all these years I have developed a great lamentation – what a great personality I have missed to see. I mentioned this to our swamiji once (Swami Shantananda), and he smilingly told me, “If you chant a lot of Krishna mantra, Prabhupadaji will give you darshan. He loves those who chant and dance!” I never told this to Hare Krishna swamiji because he always told us that his Guru Maharaj never encouraged his disciples in mystic visions, etc.

On the fifth day morning, around 2:30 a.m., my sleep broke. I was murmuring Hare Krishna mantra looking at the ceiling, my mind totally blank. My son Shivananda kept complaining about some bugs and my wife Purnima in half sleep said, “Are you trying to bring Vrindavana here?”

I didn’t know when I drowned in sleep. Then I dreamt (but it was not at all like a dream, it was so real) Prabhupada swamiji was talking with Hare Krishna swamiji in the next room. I was so excited, I wanted to go and prostrate to him. But I didn’t know if it was alright to disturb them. I couldn’t contain my enthusiasm and in the process of that emotional struggle I came to wakeful state. I jumped up, hit myself in two places – the corner of the bed and the doorway – then threw the door open and stood in the hallway. I saw Hare Krishna swamiji there facing the front hall, in front of his room, with his eyes filled with tears and his face so bright than ever. He was looking far, through the front portico, past the garden and to the front gate. I asked him, “Swamiji, was Prabhupada here? Was he here?”

He asked, “Why? What happened?

I said, “I heard Prabhupada’s voice, yes, it was so real. Tell me, was he here?”

He said, “Yes. He just walked through this hall, opened the door, stepped down the doorsteps, opened the gate and went out turning left.”

I ran to the gate, went out, walked some distance, and came back in great disappointment. Purnima was sitting down with Shivananda on her lap at the feet of Hare krishna swamiji and he was telling her all that happened. I was in brahmananda – I have never had any experience so spiritual like this in my life. Even now when I think of it, I get filled with the same emotions of that day.

I thought it was just after midnight. I heard my husband chanting Hare Krishna while lying down. My son was blabbering about bugs. I was so sleepy and exhausted from the previous night’s cleaning after the program. I said something to him that I don’t remember. The next second I had slept off. The lady upstairs starts her washing very early, that usually wakes me up. That day I was forcibly trying not to hear that beating sound because I didn’t want to get up! Just then I heard my husband loudly calling, “Swamiji! Swamiji!” Usually, even after waking up, he folds his palms, rubs them chanting the Lakshmi prayer, and only opens his eyes on the opened palms of his hands. Only after doing this will he get up. And even though the room will be dark, he will walk as though he sees everything so clearly, open the door, go in front of the puja room, put the light there and look at the pictures.

I was a little shocked when he jumped off the bed, hitting himself on the corner of the bed and again on the door, and then went out. I picked up Shivananda and followed him, after switching the light on. The next thing I saw was he was rushing towards the gate. I asked swamiji, “What is the matter swamiji?”

He said, “Nothing, nothing. He had a dream.”

I looked into the hall. I saw my husband going outside, but the doors were already opened. I asked swamiji, “Did you go for a walk so early? Who opened the door and the gate?”

Swamiji smiled, “Clean up, and come in. I will tell you everything.”

When I came back to swamiji and heard what happened, I had mixed feelings. I am so sinful that I simply slept like a bear, on the other hand swamiji’s guru visited our humble house.

My husband came back and he was so emotionally moved. I saw his hands were shivering. He sat next to me at the feet of swamiji and we heard the description all over again. I was wondering who opened the door and the gate?

Swamiji sounded totally different from the previous day, so much energy was coming out of him. When I took leave to do the household work, he said with a beaming smile, “Thank you for accomodating me here. This house is a holy place for me!” 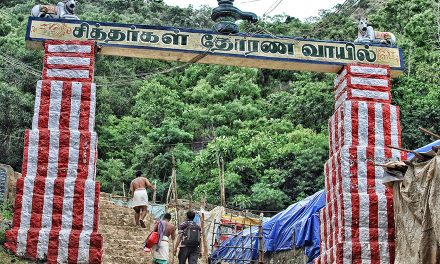