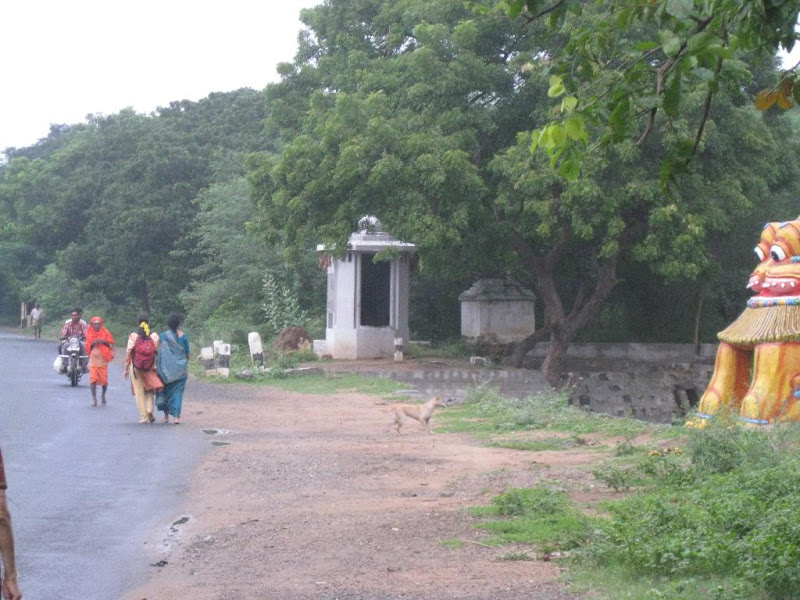 At a small shop on the way we got some biscuits and placed them before the dog. It sniffed the biscuits a little and moved away without eating them. Odd I thought. But maybe biscuits were not its thing. At any rate I was not wasting more money on the dog. It was Pradosham that day and we ourselves were planning on not eating through the day till evening.

After a little while, the dog ran ahead of us and we found it waiting for us outside the Dakshinamurthy shrine before Ramanashram. Having found the dog there, we went inside the temple to have a Darshan and some Vibuthi. As we resumed our walk, the dog continued following us. It did this walk ahead and stop routine in a couple of other temples on the way – including some like a Ganesha temple that was to give one a lot of wealth which I hadn’t noticed on earlier trips. 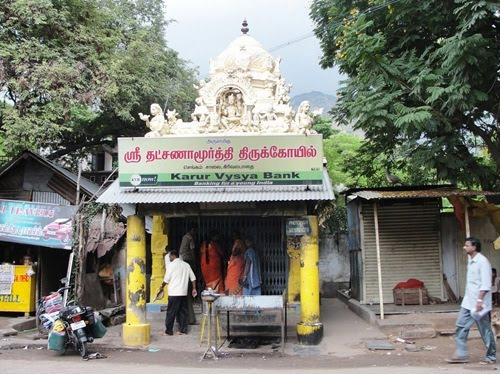 I was getting a little curious about the dog as time went by. Every 100 meters or so, it would be attacked by the dogs of that territory. For a small dog, it was very brave and would snarl back. Though it looked timid, it had unusually large, sharp and menacing teeth. Most dogs got scared of that. When the attackers were too many in number it would lie down meekly and let them gather around him and bark away to glory till they realized that he wasn’t planning on staying in their turf but was just a transit passenger. This ritual happened every 10 minutes and was pretty scary. After the first couple of times when my aunt – who is mortally scared of dogs – reacted strongly to the dogs, he would cross over to the other side of the road whenever dogs attacked so that the confrontation would happen away from us. This itself was very strange awareness on its part, but at that time it didn’t strike me as too odd. I had read enough about animals being sensitive to humans, and I thought this might have been a lost pet that was trying to become friendly with us.

Half way through the walk the rest of the group had moved ahead and it was just Surya and me with the dog. Surya had by then taken a liking to the dog and named him Kala – given that the Vahanam (or mount) of Kalabhairava was a dog. 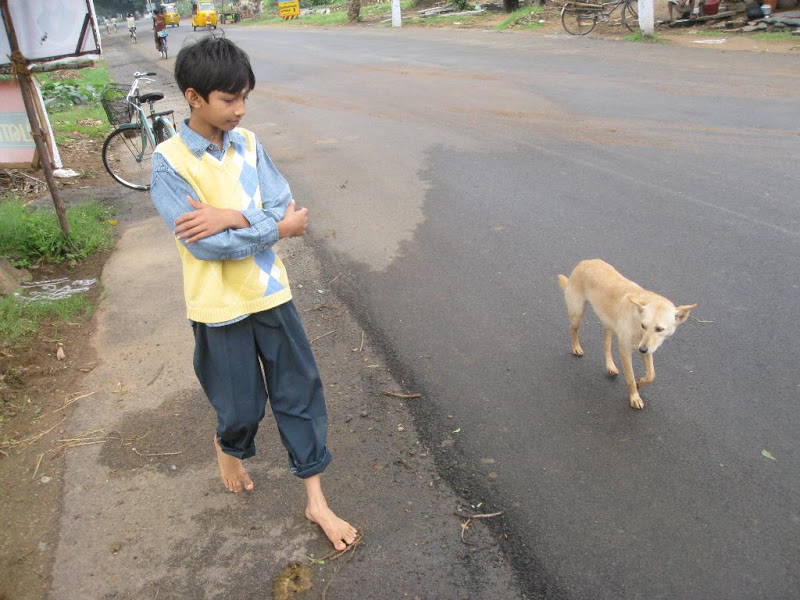 Somewhere a little before the mid point, he suddenly went off into a narrow path that led away from the main road towards the hill and the rougher “inner path”. Having been used to the follow-kala routine by now, we went along to see where it was going. After walking for 5 minutes or so, we came to a small lake and the path got less defined and more thorny. Since we were not wearing slippers our speed slowed down considerably. After a little more time, a number of other dogs started gathering around us in a distance and it looked like a showdown with Kala was going to happen again. I got scared and decided to get back to the road. As we walked away Kala tried to stay put indicating that we should follow him. But when he realized that we were not staying, he ran ahead of us, stopped and then amazingly did a full sashtanga namaskar to the hill – with both his front and back legs flat on the ground. I have never seen a dog do anything like that before. He stayed that way till both me and Surya did the same, and then he trotted back on to the road.

By that time I realized that this was no ordinary dog. But my logical mind came up with numerous other possibilities such as that it belonged to a local swami and hence was just following the path taken by that person etc., and we walked on.

Then at one point we saw that he wasn’t following us anymore. We looked around and couldnt see him anywhere ahead or behind. We traced back our steps to the Kubera Linga temple. And there we realized that the abhishekam was going on and they had had a screen in front of the deity. We had left the temple earlier because we were getting late. But Kala has stayed on outside. He was not let into the temple, so it is unlikely that he could have seen that the screen had been drawn in front of the deity. But as soon as we came, the screen was opened and we could see the deity. And when we left this time, we had Kala tagging along right behind! 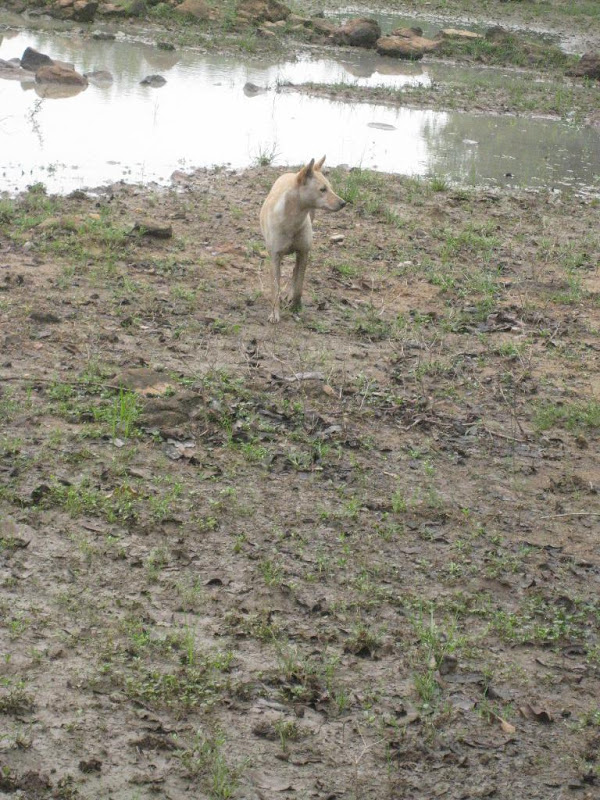 I was now worried about Surya getting too attached to the dog. I was also thinking that as we got into the bus, the dog would try to follow us back to Bangalore. But then I had learnt enough over the last year not to worry too much thanks to the wisdom of my Guru Swami Nithyananda whom I was totally hooked to. We walked the next few kilometers back to the starting point – the north gopuram of the Arunachala temple. Just as we came close to the main gate, Kala walked under a small deserted stall and lay down quietly. He wouldn’t come out even if we called. We realized that it had been 6 hours since it had taken any food or water and bought some other food. Again it didn’t touch it. In awe we went to the temple to tell the others who had gone ahead about what happened. 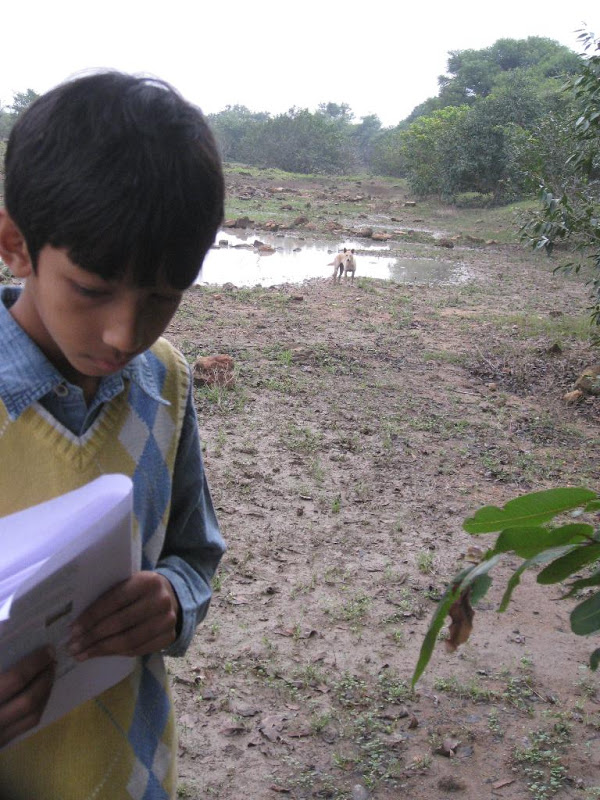 I have no idea how to explain the incident or what it meant. Later on I read a story about how in Ramana’s life there was a dog that used to eat from Bhagavan’s plate. And how one day it committed suicide by jumping into the well because one of the disciples had criticized it for eating from his plate. Bhagavan apparently chided the disciple and said that the dog was a Siddha who had taken birth just to be with him. So perhaps Kala was another such being that was hanging around Thiruvannamali just to go around the hill. 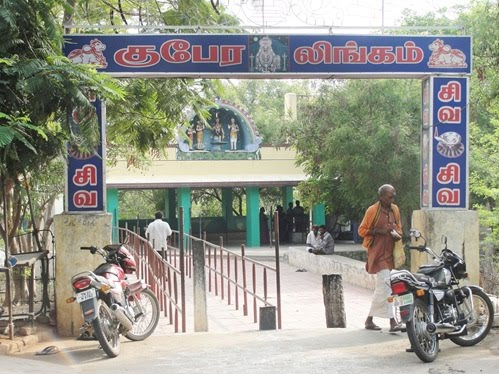 I have heard about such strange incidents happening around there in books. But having seen it first hand was something indescribable for me and Surya. It makes us realize how little we know of the amazing and mystical world we live in. 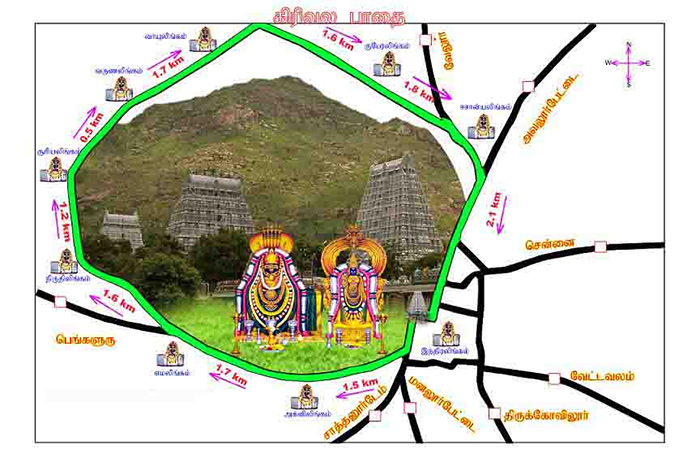 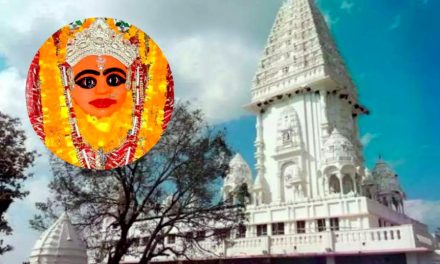