[ Transcribed from lectures given by Sri Atmatattva Das ]

Everyone was running to the place where the confrontation between Rama, Lava and Kusa was. Sita came and said, “Stop! What are you doing? You are going to finish your own dynasty!”

Ramacandra said, “Who is that? Sita! Valmiki!” So he stopped.

He went to Valmiki, and Valmiki said, “This is your wife Sita. These are your children, Lava and Kusa. Somehow they are upset with you, because you sent Sita out of the country.”

Lava and Kusa were listening to all this, and it all came together in their minds. “Oh, this is my father!” So they fell at His feet.

Ramacandra said, “Now I am very happy. At the end of Asvamedha, somebody stopped my horse, but they were only my children. Otherwise it would be a very bad name for me. All right Lava and Kusa, you come. We will go, and I am very sorry for sending Sita to the forest. I won’t do this any more.” When he was talking like this, Sita was folding her hands and closing her eyes, and she was praying. Ramacandra said, “Sita, come and we will go.”

“Where are you going to go?” Rama asked her.

“Wherever I’m supposed to go. I’ve had enough. I’m not taking any more of this treatment. I’m going.”

Ramacandra said, “No, no, you must come with me.” Sita said, “No, I am not coming.” And she prayed to Mother Earth. The earth opened and Bhumidevi came out and took her inside. Ramacandra lamented and came back to Ayodhya, kept Lava and Kusa as the kings of Ayodhya, and then he ruled for 30,000 years after that, and so many demons were killed. The Madhu demon was killed near Vrndavana area, and a city was established there, Mathura. Satrughna was sent to the Sind region. Laksmana and Rama were there, and the time came when he had to wind up his pastimes. So Brahma instructed Yama, to go and tell Rama that it is time for him to come back.

Yama came, and he dressed himself like a Brahmin, and said, “I want to get some charity from Ramacandra.” So he came in there. When Ramacandra asked him what he wanted for charity he said, “I want a private, confidential discussion with you. No-one should be there.”

So Ramacandra said, “Hanuman, you go. And Laksmana, you also should go.”

The Brahmin said, “No-one should come in between. If anyone comes during our discussion, he must be banned to the forest.”

So Rama said, “That’s no problem, no-one will come. You can tell me.”

So then he started talking with him. In the meantime when Laksmana went outside, he saw the four Kumaras there. He paid obeisances and said, “Oh, you are here! This is a great fortune for us! Here is a nice guest house for you to stay.”

They said, “We didn’t come here to stay, we came to see Rama.”

Laksmana said, “You can see Rama, but come and take rest, take some prasad.”

They said, “We will see Rama first, then rest and prasad.”

So then Laksmana said, “No, you cannot go.”

They said, “What? Same thing again? Someone did this before, and do you know what happened?”

Laksmana said, “Please don’t get angry with me. I know you are absolute personalities, but Ramacandra has given some promise to a brahmin that no-one will come in.”

“I will be banned to the forest,” he said.

The Kumaras said, “You won’t take this sacrifice for serving us saintly people?”

He said, “Yes, I must take it! Why didn’t I think of that?” and he ran inside. As soon as he came inside, the Brahmin stopped talking.

“Oh! He has heard my secret! What will happen now?”

Ramacandra said, “Laksmana, you are banned to the forest.”

Laksmana said, “Yes, you are very expert in banning people, so I will go. My only point is that the Kumaras are outside. They came to see you.”

“The Kumaras are here?” Rama said, and he ran outside. When he got outside, there were no Kumaras. They only came to do that, and they had already left. When he came back, there was no Brahmin. He had also left. Then he was looking for Laksmana, but there was no Laksmana. He had gone to the forest. Laksmana went to the forest and sat down. He meditated, opened his eyes and Sesa came out of his mouth and he entered the ocean. Then Ramacandra called Lava and Kusa and said, “Now I am going.”

All the citizens said, “No. Where are you going? We will also go with you.”

He said, “If all of you go with me, then Lava and Kusa won’t be kings. They have to rule somebody.” He made a calculation on who stays and who goes. Sixty percent of the population decided to go, and Ramacandra walked out with his mothers and the elderly people like Sumantra. The citizens were also there, and they went to the Sayayu river, and Ramacandra entered the Sayayu river with all of his citizens, together. No-one’s bodies were found. They were all elevated to the spiritual Ayodhya. Lava and Kusa ruled and the dynasty was continued until fourteen generations after the beginning after the beginning of kali-yuga. The last king had no child, and in this way the surya-vamsa was over.

Ramacandra does these pastimes a little different in each Treta-yuga. Sometimes Sita was taken from the forest, sometimes from Janaka’s palace, sometimes from Ayodhya. A little bit different every time, but still the same thing. Ravana is stealing, and Rama is destroying the demons. He leaves us this wonderful literature through Valmiki, that we can all listen to it and if we know the appearance and activities of the Lord in principle, then after leaving this body we won’t come back to this material world. 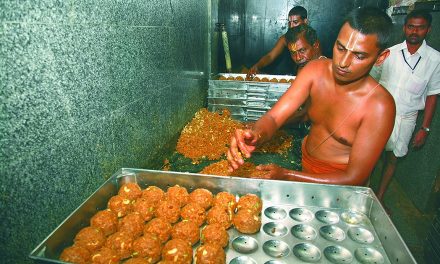