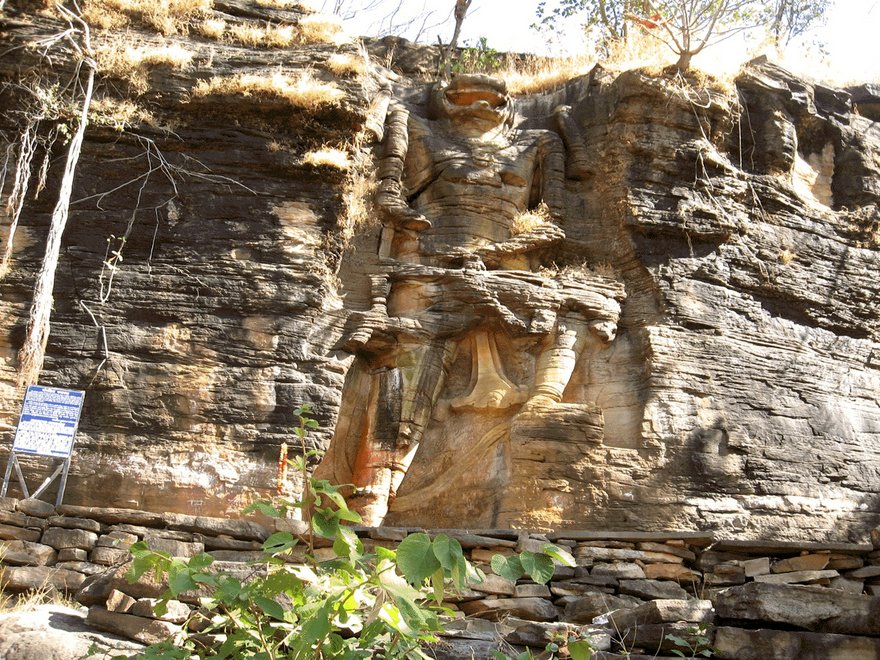 In the Lalitpur district of Uttar Pradesh is the ancient village of Dudhai, which is home to an astounding murti of Lord Nrsimhadeva. Cut into the rock face of a hillside way off the beaten track, relatively few pilgrims search out this hidden treasure. Although it is listed as a sacred site by the Archaeological Survey of India, little documentation is available about the sculpture.

O Lord Nrisimha, O Lord Nrisimha, Your transcendental body, which is the ultimate shelter of everything. Is decorated with a beautiful golden crown, a forest garland, shark-like earrings, various excellent jewels and an out projecting wide tongue. (Sri Nrisimhashtakam)

The rock-cut Nrsimhadeva of Dudhai stands over thirty feet tall, and is masterfully sculpted to take advantage of the natural striations in the rock formation, which add to the design of the murti. The demon Hiranyakasipu is stretched across the Lord’s lap, being composed of natural stone that is silhouetted by the bas relief rock-cut design.

Lord Nrsimhadeva’s lips are pulled back in a snarl, revealing his fearsome teeth and tongue. The lines of rock have been used advantageously, bringing certain elements of the design to a fine point. The Lord’s clothing and ornaments, for example, are very distinct in some places, while in some places the lines of the sculpture have been blurred by water and weather.

A split column is beautifully executed in the murti, and the sculptor took full advantage of the natural colors in the rock face, which emphasize certain aspects of the murti design. Overall, this massive image is so camouflaged by its natural surroundings as to be almost invisible, until one gets relatively close, and views it from the right angle.

Based on other cave excavations in the area, this rock-cut murti of Sri Nrsimha is thought to have been created in the Gupta period, when Vaisnava worship was predominant in Uttar Pradesh. The nearby Dasavatar temple in Deogarh, and a huge sculpture of Lord Varaha at the nearby Udaygiri caves in Madhya Pradesh are classic examples of the iconography found here in the Nrsimhadeva murti.

There is a complex of Hindu and Jain temples in the area of Dudhai, and quarrying is now going on all around the area. We can only hope that the ASI will enforce strict protections for this exceptional Lord Nrsimhadeva sculpture.

Dudhai village is located about 50 kilometers from the center of Lalitpur district, which is about 100 kilometers south of Jhansi. To get here, drive down NH 26 from Lalitpur, turn off the highway at Bagaria (about 30 kms from Lalitpur) and drive to Dudhai via the village of Pali.

Dudhai village is 28 kilometers from the highway turn-off. Although part of the road to the hill site is a forest road built during the British era, much of the road is more like a cattle track, and is best driven in a vehicle suited to off-road travel. If any of our Sun readers are fortunate enough to visit Lord Nrsimhadeva in this place, we hope they will share pictures with all the readers. Meanwhile, the following video gives us a brief glimpse of the environment.

O Lord Nrisimha, O Mukunda, Madhusudana, Murari, Vamana, You are the shelter of the surrendered souls. O Lord of the demigods, cause of all causes, please do not neglect me. Kindly fulfill my desire of passing my whole life chanting Your holy names. (Sri Nrisimhashtakam)

Sun Worship in Hinduism and Its Scientific Meaning