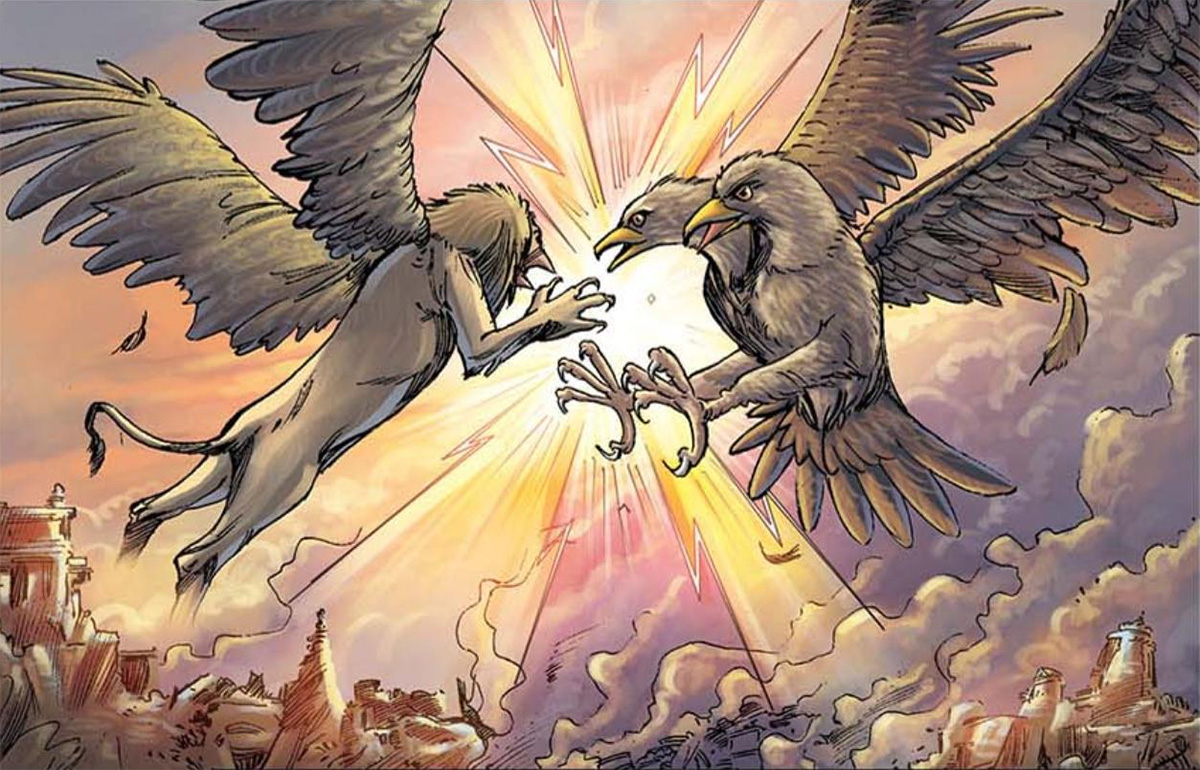 As with Shiva Sharabha, Gandabherunda is not mentioned in the Bhagavata Purana, although he is mentioned in some Puranas and in certain regional scriptures in South India. For example, Sri Chinna Jeeyar has observed that Gandabherunda Narasimha Avatharam is mentioned in a minor text known as Nru Kanteerava abhyudhayam. Such references state that when Shiva manifested in his ferocious bird-form Sharabha to help contain the Lord’s anger, that Sri Narasimha manifested his own, even more terrible bird-animal form, with two heads.

Some have concluded that the bird mentioned in the Rg-Veda as the golden winged bird, Suparna, is actually this self-same Gandabherunda.

One of the most well-known images of Gandabherunda is found in the Mysore Court, where the royal logo of the Wodeyars, former rulers of Mysore, incorporates the form. Another striking image of Gandabherunda (shown above) is painted as a decorative motif on the ceiling of the Nandi mandapam of Thanjavur Brihadiswara temple. 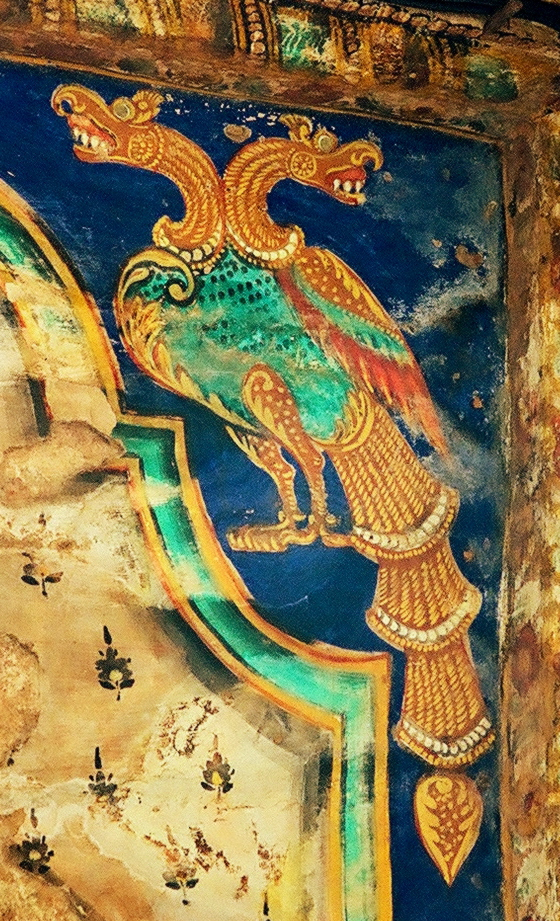 There are many other Sharabeshwara temples in South India. Between the towns of Kumbakonam and Mayiladuturai, at a place called Thirubhuvanam, Lord Sharabeswara is being worshipped as Kampakeswara. This site is said to be a place where Brahma worshipped Sharabha. There are also other places of Sri Sharabeswara worship at Gangai Konda Cholapuram, Dharapuram, Karaikkudi, Thiruvannamalai, and Chidambaram. In the vicinity of Chennai, Sri Sharabeswara is worshipped at Denupureswarar Temple (at Madambakkam near Tambaram), at Trisoolam Temple (near Meenambakkam), and also at Kurungaleeswarar Temple at Koyambedu. 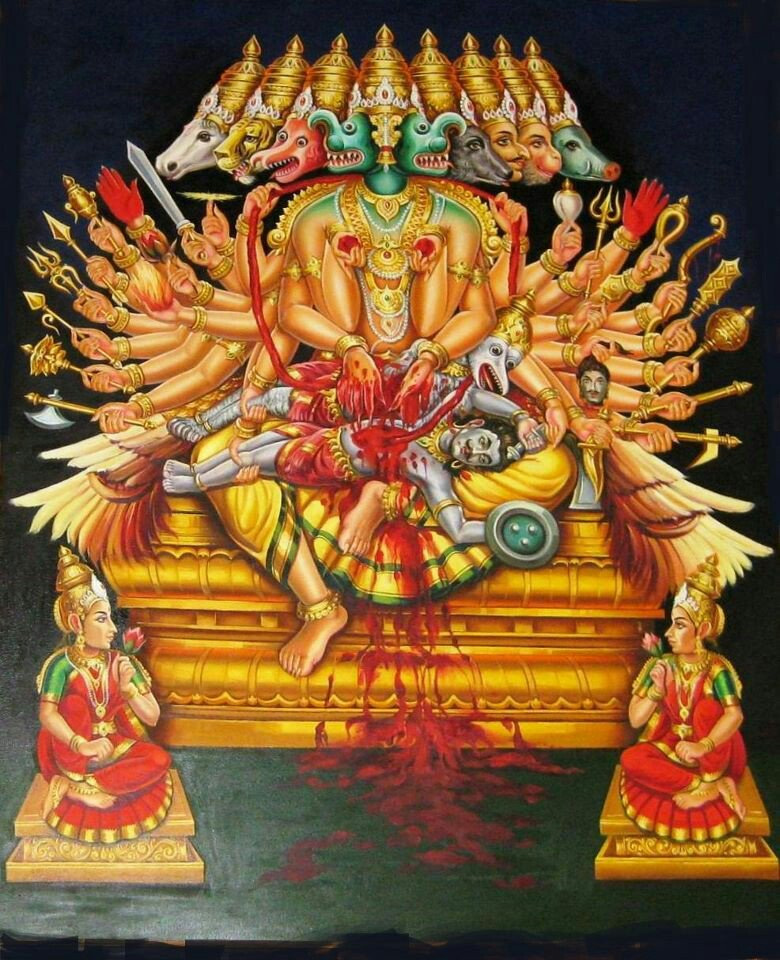 The Sharabha form is described as being the half-bird (Sharabha) and half-yalli (the lion creature) who enveloped Narasimha with his wings, calming him down. Because Sharabha removes trembling due to fear, one Sharabha deity in lingam form is known as Kambahareshwarar (kampa, trembling; hara, to remove). This is one of the few temples where the Moolavar (main deity), though a lingam, is a form of Sharabheshwarar.

At the Thanjvur Sharabheshwarar temple, the Utsava Moorthy draws a large crowd of worshippers. This distinctive murti of Sharabheshwarar is panchaloha, having the face of a lion, nose of an eagle, body of a human, two huge wings representing Soolini Durga and Pratyankara Devi, eight legs, four arms carrying fire, rope, axe and deer respectively, fingers with sharp nails, and holding Sri Narasimha firmly with his front legs. Narasimha is depicted fighting to free Himself from this grip using His legs, with two of His hands folded in prayer.

Many such fierce forms of Shiva Sharabha are found throughout South India, guarding the entrance to temples. 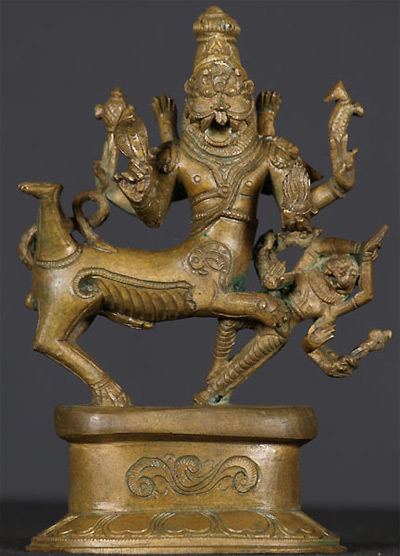 The primary iconography of Sharabha is as follows: eight legs, four of them like a lion’s, resting on the ground, and four long, clawed legs turned upward; a body that is half-man, half-lion, and two wings, which are associated with Durga and Kali. In one unpublished painting, Kramrisch notes that the figures of the goddesses are inscribed in Shiva Sharabha’s golden wings; nagas move on and around his body, tail and wings, and the beaked head of Sharabha is hooded by a naga protector.

S.K. Tiwari refers to an image of a murti wherein Lord Narasimha is positioned underneath Shiva Sharabha. A similar bronze image is preserved in a Shiva temple at Tribhuvanam in Tanjore district. In this murti, Sharabha is depicted with three legs, the body and face of a lion, a tail and four human arms, the upper right hand holding a parasu, the lower right one a pasa, the upper left hand a mriga, and the lower left one holding agni. With his front legs, Sharabha has pinned Lord Narasimha, who is struggling against His adversary with eight arms.

According to the Kamikagama (Sthapatya Veda) , the body of Sharabha should be that of a bird of golden hue, having two uplifted wings, two red eyes, four lion-like legs resting on the ground and four others with sharp claws lifted upward, and a tail, and a man-like head with the face of a lion, wearing kirita-mukuta over his head. There should also be side tusks, and with a terrific appearance on the whole, Sharabha is to be shown carrying Narasimha with two of His legs. The figures of Narasimhadev should be in ordinary human form, with the hands held in anjali pose.

Sri-tattvanidhi, a 19th century treatise of Karnataka, requires the figures of Sharabha to have thirty-two arms holding different attributes and weapons, embracing Durga with one hand. Umarkarandgama as well as Sarbhopanishad give somewhat different accounts of the Deity of Sri Sharabha.