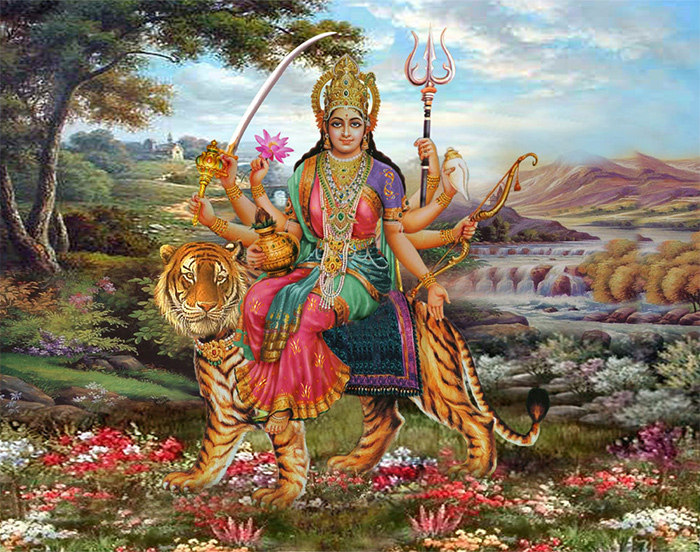 The book which relates the story of how the devi (mother Goddess) killed Madhu and Kaidabha as Vishnu Maya, killed Mahishasura as Lakshmi, and killed Shumbha and Nishumbha in the form of Goddess Saraswathi, is known as Devi Mahatmya in South India, Chandi in West Bengal and as Durga Sapthasathi in the northern parts of the country including Varanasi. It consists of Chapters 74 to 86 (13 chapters) of the Markandeya Purana and has 700 stanzas. This Purana is also authored by Veda Vyasa and is a medium sized Purana.

The stories of Devi Mahatmya are as told by Sage Markandeya to Sage Baguri. He tells him that one king called Suradha, who was driven out of his kingdom by his own people met one Vysya (businessman) called Samadhi who was driven out of his home by his wife and sons, in the forest. They discover that though their own people have driven them out, they are both worried about the welfare of their people. It appears to them that this is unnatural. So they approach Sage Sumedhas who was also living in the forest. The sage tells them that all this is the illusion created by the great Goddess called Vishnu Maya. They became curious and want to know about this great mother Goddess. He then relates to them the story of Devi Mahatmya, which consists of three stories in all of which the mother Goddess kills the enemies of Gods.

The first story is that of Madhu and Kaidabha. They take birth from the earwax of Lord Vishnu while he was asleep and start troubling Lord Brahma who was sitting on the lotus originating from the belly of Lord Vishnu. Lord Brahma prays to the Goddess to help him continue his work of creation. The goddess appears and takes the form of Lord Vishnu and kills both Asuras after wrestling with them for thousands of years. Since both these Asuras were of Thamasic origin, she also had a thamasic form.

The second story is of how the mother Goddess helped the devas by killing Mahishasura. This Asura who had the form of buffalo, drove away the devas and Indra from their homes. They all go and approach the holy trinity for the redressal of their grievances. This made those three gods very angry and the innate power of the Goddess in them came out and joined together. This goddess was further strengthened by the powers of the various Gods. She was equipped with arms by all devas. This goddess, mainly consisting of the anger-generated power killed Mahishasura.

The third story is of how the Great Asura brothers Shumbha and Nishumbha were killed by the goddess. This time the gods approach Goddess Uma who was wandering in the Himalaya Mountains and told her of her sufferings. Out of the body of the Goddess came Koushikhi or Chandika. She was black in colour. She along with the powers generated by various Gods killed Shumbha and Nishumbha.

Sage Markandeya then tells of how, The king Suradha and Vysya Samadhi did penance on the goddess and got the boons that they wanted.

In the twelfth chapter of this great book, the Goddess tells that for one, who reads or hears, these three stories of her, there is nothing impossible to obtain including salvation.

In my translation I am following the interpretation of this great book by Brahmasri Kandiyur Mahadeva Sastrigal in malayalam, which is based on the text given to him by Sri Hari Krishna Sharma of Aurangabad , based on the commentaries on the book given in explanatory guides of the book viz. Durga Pradeepa, Gupthavathi, Chathurdhari, Santhanavi, Nagoji bhatti, Damsodharam and Jagat chandra chandrika.

It is believed that just possession of this book has helped many great people to fight evil spirits as well as getting the blessings of the Goddess herself. Several such folk stories abound all over India. One of those famous one in Kerala was how one great Manthrika called Kalluru Namboodhiri was asked by a king called Shakthan Thamburan, to enter the Kodungaloor Bhagawathi temple at night after the festival and bring back his ring from the closed sanctum sanctorum. He did this easily by taking with him a copy of Devi Mahatmya. This book though it is a treasure house for all those trying for super natural powers is also a book leading one to get his wishes fulfilled and also attain salvation.

It is believed that reading of the book during Sharad and Vasantha Navarathris is auspicious. In Appendix 1, summary of talk given by Swami Krishnanada on “Esoteric significance of Devi Mahatmya “ is given and Appendix 2 gives the great Sthothra with meaning which summaries the story of Devi Mahatmya.

Devi Mahatmya is a story but each of its slokas is considered as mantras. There are two methods of how to start reading Devi Mahatmya. The first one is called Tryangam and consists of reading three prayers viz Devi Kavacham, Devi argalam and Devi keelakam followed by meditation and chanting of the Navakshari manthra given as:

This manthra is of very great power and should not be chanted unless, it is taught by a Guru.

It is recommended that the entire Devi Mahatmya should be read in one sitting. After completion of the reading it is necessary to chant the Devi Suktham consisting of the slokas seven to 36 of chapter 8, is to be chanted. If the Guru has taught the navakshari manthra, then it should also be meditated up on.

It is important to know that daily the parayana should start with the trayanga manthras, text of Devi Mahatmya followed by the chanting of Devi Suktham. It is also essential not to stop in between while reading a chapter. If for some reason, it is stopped, the entire chapter should be read again.

It has also been told that:

The benefit of reading Devi Mahatmya several times is given below:

Three times – to get rid of black magic

Five times – to get rid of difficulties caused by planets

Seven times – to get rid of great fear.

Eleven times – to get over fear of death, attraction of the king

Twelve times – getting desires fulfilled and destruction of enemies

Fourteen times – to attract women as well as enemies

Fifteen times – pleasant life and getting of wealth

Sixteen times – to get sons and grand sons

Seventeen times – to get rid of fear of the King

Eighteen times – to get occult powers

Twenty times – for war to end

Twenty-five times – to come out of prison

Hundred times – to get rid of great sorrow, banishment from caste, Loss of life, salvation

The kathyayani thanthra mentions various other methods of reading Devi Mahatmya. Some of them are:

1. Chant before and after every sloka, the Navakshari manthra. This would make your magical chants effective.

2. Chant Om Bhoor Buva swaha before every sloka and then chant Suva, bhuva, bhoo Om after every sloka. Chanting one hundred times would get you occult powers.

3. Add “Jatha Vedase” before every sloka and chant. This would lead to fulfillment of all desires.

4. After every manthra chant the tryambaka manthra viz.

This would prevent untimely death.

5. Chant Tryambaka manthra one hundred times before and after reading Devi Mahatmya and this will lead to avoidance of early death.