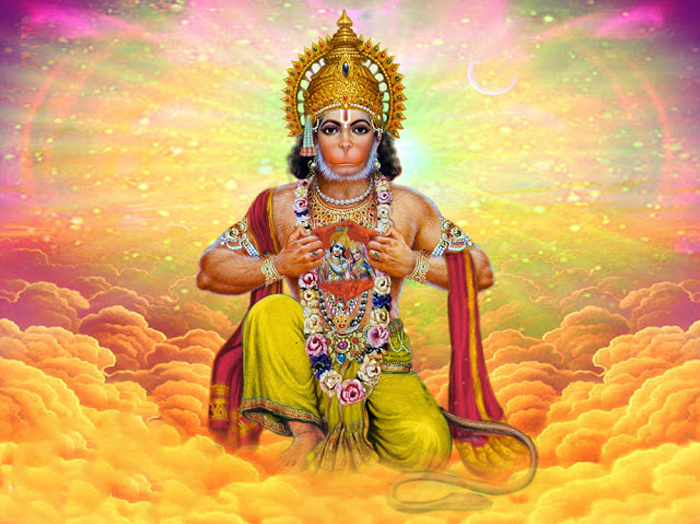 The story of the birth of Hanuman goes thus: Brihaspati had an attendant called Punjikasthala, who was cursed to assume the form of a female monkey — a curse that could only be nullified if she would give birth to an incarnation of Lord Shiva.

Reborn as Anjana, she performed intense austerities to please Shiva, who finally granted her the boon that would cure her of the curse.

When Agni, the god of fire, gave Dasharath, the king of Ayodhya, a bowl of sacred dessert to share among his wives so they may have divine children, an eagle snatched a part of the pudding and dropped it where Anjana was meditating, and Pavana, the god of wind delivered the drop to her outstretched hands.

After she took the divine dessert, she gave birth to Hanuman. Thus Lord Shiva incarnated as a monkey, and was born as Hanuman to Anjana, by the blessings of Pavana, who thus became Hanuman’s godfather.

The birth of Hanuman released Anjana from the curse. Before she returned to heaven, Hanuman asked his mother about his life ahead. She assured him that he would never die, and said that fruits as ripe as the rising sun would be his food. Mistaking the glowing sun as his food, the divine baby leapt for it. 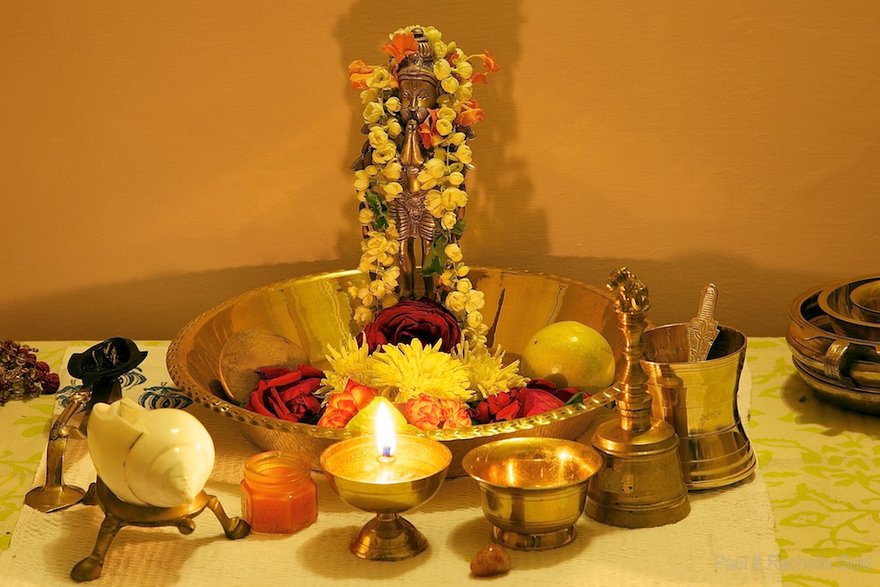 Indra struck him with his thunderbolt and hurled him down to earth. But Hanuman’s godfather, Pavana carried him to the nether world or ‘Patala’. As he departed from the earth, all life panted for air, and Brahma had to beg him to return. In order to appease him they conferred a lot of boons and blessings on his foster child that made Hanuman invincible, immortal and super powerful.

Hanuman selected Surya, the sun god as his preceptor, and approached him with the request to teach the scriptures. Surya agreed and Hanuman became his disciple, but had to face his constantly moving guru by traversing the sky backwards at equal pace, while taking his lessons. Hanuman’s phenomenal concentration took him only 60 hours to master the scriptures.

Surya considered the manner in which Hanuman accomplished his studies as his tuition fees, but when Hanuman requested him to accept something more than that, the sun god asked Hanuman to assist his son Sugriva, by being his minister and compatriot.

The Power of Devotion

The character of Hanuman teaches us of the unlimited power that lies unused within each one of us. Hanuman directed all his energies towards the worship of Lord Rama, and his undying devotion made him such that he became free from all physical fatigue. And Hanuman’s only desire was to go on serving Rama. 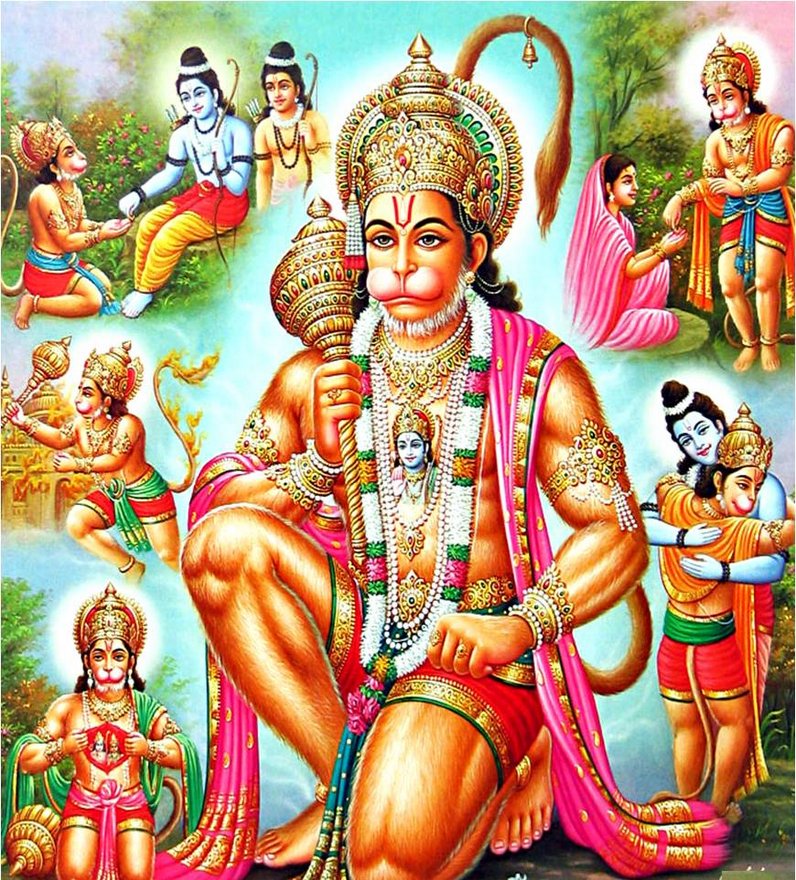 Hanuman perfectly exemplifies ‘Dasyabhava’ devotion — one of the nine types of devotions — that bonds the master and the servant. His greatness lies in his complete merger with his Lord, which also formed the base of his genial qualities. 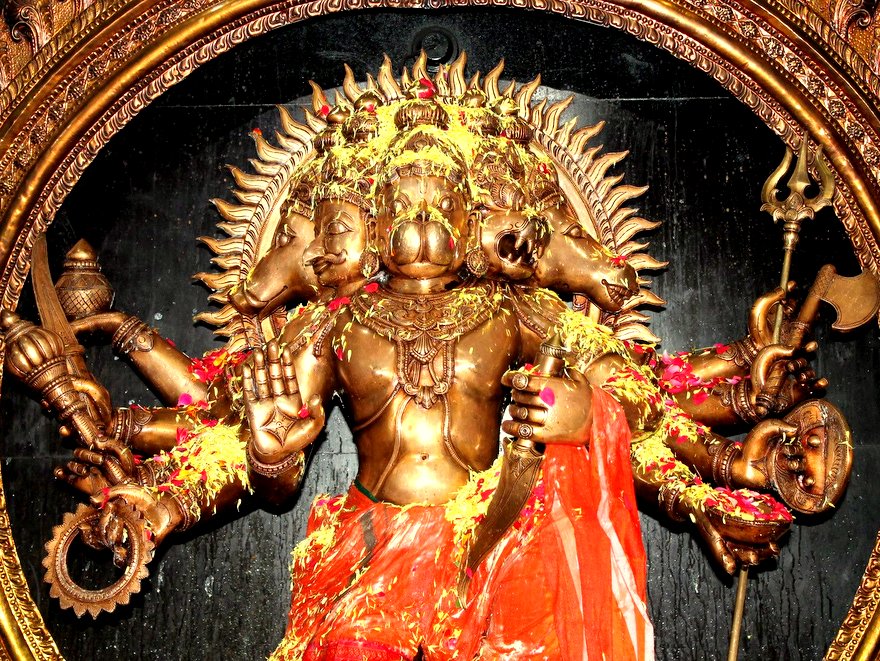 It is hard to find another who is at once so powerful, learned, philosophic, humble and amusing! Hanuman features prominently in the great epics of Ramayana and the Mahabharata.

Hanuman met Rama and his brother Lakshmana while Rama was in exile in the jungle, and searching for his wife Sita who was abducted by Ravana. Their quest brought them near Pampa Lake at the foot of Mount Risyamukha, where the monkey king Sugriva and his ministers were hiding. 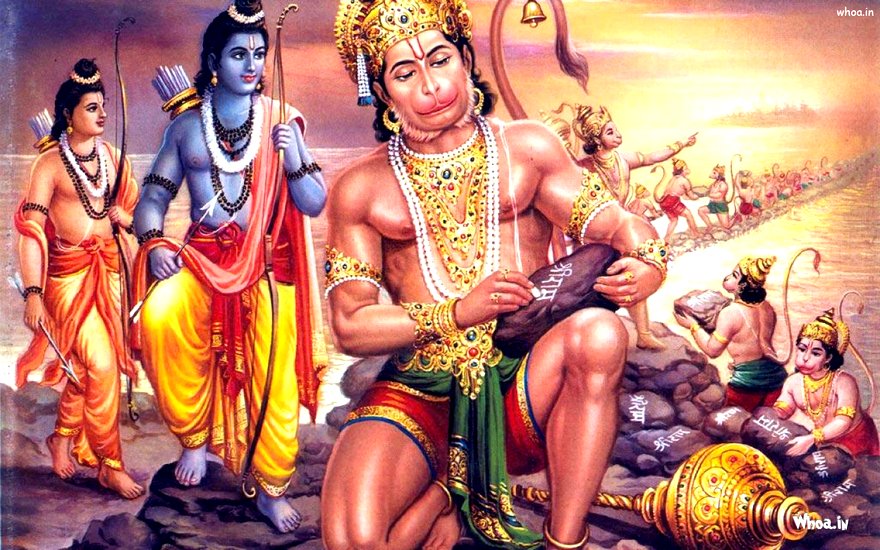 Sugriva, who was being persecuted by his brother Bali, suspected that Rama and Lakshmana might have been sent by Bali to slay him. To find out the facts, Hanuman approached them in the guise of a Brahmin.

In Service of Lord Rama

Lord Hanuman’s initial words highly impressed Rama, and made him comment: “None can talk this way without mastering the Vedas. He has such a flawless countenance, a wonderful accent, and a captivating way of speaking.

He has the ability to move even an enemy…” After he revealed his identity as the prince of Ayodhya, Hanuman fell prostrate before him in respect of the Lord. Rama picked him up and embraced him. There began the story of Hanuman, which is inextricably interwoven with Rama, and dealt with in detail in Valmiki’sRamayana and the Tulsidas’ Ramacharitamanas.

Exciting Exploits!
To cut the long story of Hanuman short, he then introduced Rama to Sugriva, and began his massive search for Sita. Finding out her whereabouts, he consoled Sita, and burnt down the city of Lanka. Hanuman then brought Rama to Lanka, fought the battle against Ravana with his simian army, and vanquished the demons. 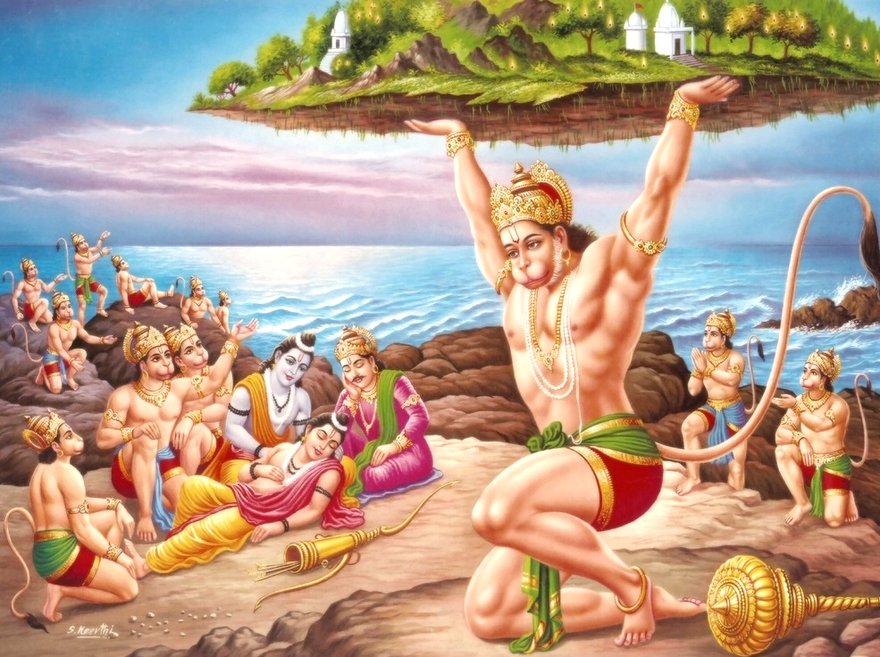 Hanuman’s greatest feat was saving the life of Lakshmana by fetching the life-giving herb “Sanjivani” from the Himalayas. He flew fast towards the Himalayas, but unable to recognise the right herb, picked up the whole mountain on his hand and flew back to Lanka, just in time to save Lakshmana. Thereafter Hanuman served Rama forever.

Hanuman and the Pandavas

The venerable ape also features in the great epic Mahabharata. How Hanuman met the valiant Bhima, one of the Pandava brothers is itself a marvelous tale. He recognized Bhima as his spiritual brother, since both were born with the blessings of Pavana, the Wind God, and promised to aid the Pandavas in the big battle of Kurukshetra.

Hanuman positioned himself in the flag of Arjuna’s chariot to secure and stabilize the war-craft. The triangular saffron flag of Hanuman stands for stability and equilibrium, sense-control and mind-control, and a sure sign of victory over all that is base and evil.

Blessings From All Gods

He was taught by the Sun God who taught him all the knowledge that he had. It is believed that lord Hanuman was one among those who saw lord Krishna tell Bhagwad Gita in the vishwaroop state. Lord hanuman was a great devotee of Lord Rama. He had promised Lord Rama that he will live on earth as long as people took the name of Rama.

This is exactly why Goddess Sita blessed him that his idol will be placed in all public places. This will ensure that he can hear people chanting the name of Lord Rama. Interesting that Lord Hanuman is considered immortal in Hinduism. He is said to be alive even today and that is why He is also known as cheeranjeev or the one who lives forever.

When you visit any town or village in India you will find many idols of Lord Hanuman. They are mostly orange in colour. It is said that lord Hanuman is the only God who can help to get rid of evil spirits. Many people worship the Lord Hanuman to get blessed and to get free from evil spirits. 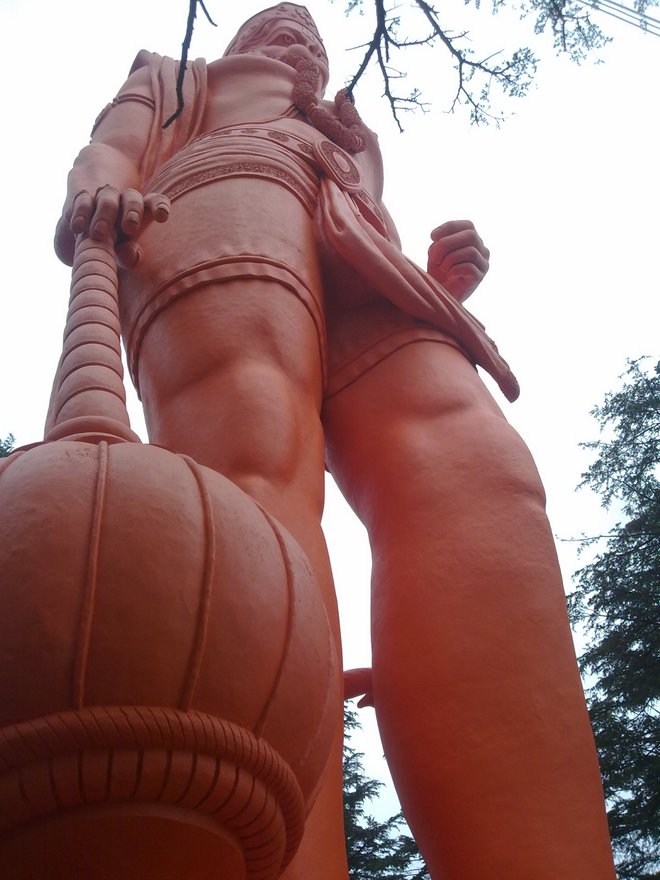 It is said that Lord Hanuman can remove all hurdles. People often pray to Lord Hanuman before they start a journey. You will find small idols of Hanuman in vehicles and cars. This is mainly because lord Hanuman can protect people from all trouble.

Women are not allowed to touch the idol of lord Hanuman. They can enter the temple and pray but they cannot touch the idol as he was a Brahmachari. Many modern feminists think that this is not equality with the female gender, but let us tell you that it is merely a symbolic ritual which mainly signifies that both genders (men and women) have an inherent desire which can only be overcome with great will power, meditation and Prayers and till that time, it is best to avoid too much contact with each other.

We have also published an article on the benefits of celibacy. Apart from this there is no such anti-feminism in this practice and the Lord Hanuman Himself gave equal perhaps more respect to the wife of Sri Rama than anything else.
Sri Hanuman Chalisa

Here is the audio for benefit of our readers:

Then you need to offer flower now you should chant:

After this you must offer dhoop and chant: 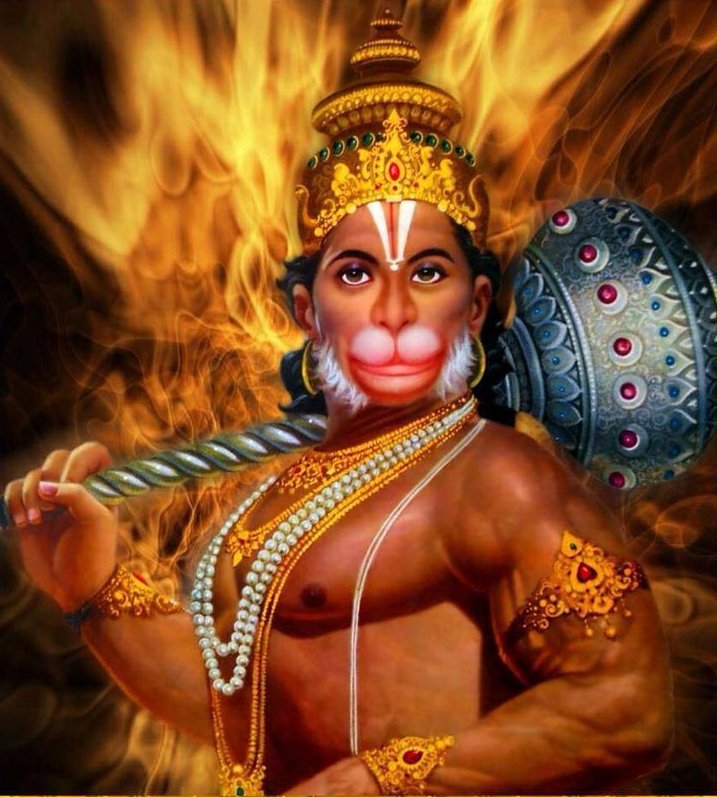 While lighting the lamp infront of Lord Hanuman you must say:

At the end you should offer gud laddus to the Lord and chant:

This is the shortest and the most convenient way to please Lord Hanuman and offer a pooja. You can do this puja at your home or you can also go to a Lord Hanuman temple.

Many of our readers have been putting for constant requests to put the above mantras in English. Actually we cannot translate them per-say into English but will give a brief description so that after known the meaning you can just recite the above mantras which are written in English alphabets itself

“Aum shree Ramdut Hanumate Namah” basically means that we offer our salutions to Lord Hanumana who is the messenger of Lord Rama. Samarpayami means offering so we are offering several things to the Lord in above lines such as flowers, sindoor and so on. Basically this is a form of devotional bhakti or bhakti yoga which is one of the types of yoga or a method in which one can unite with the Divine.

Days of the Lord

Although there is no day when you cannot worship Lord Hanuman, still tuesdays and saturdays are specifically dedicated as the days of Lord Hanuman. If the puja of Lord Hanuman is done on Saturday it can protect you from all evil and trouble in life. Some say that Lord Hanuman is pleased with love and devotion. If any devotee worships him with all heart they will get blessed. You can also chant the name of Ram Naam or

for as many times as you can in a day. Lord Hanuman is also associated with Goddess Kaali. This is exactly why when you offer prayer to Goddess Kaali you are indirectly praying to Lord Hanuman too. You can also fast on this day. It is better if you worship Lord Hanuman in red clothes. Red flowers and kumkum are offered to the lord.
Overcoming Fear

Although the name of Lord Hanuman delivers from all fears, still some specific mantras you can recite are as follows

and another one is