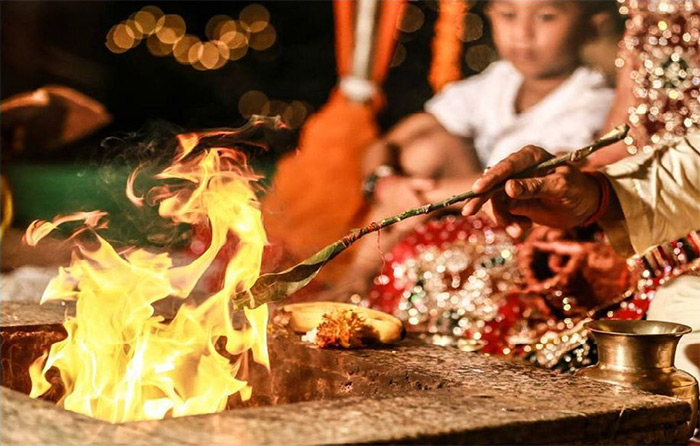 Agni is the first word of the first prayer of the first Veda. Lord Agni is the revered Fire God and accepter of sacrifices of the ancient world and even today. He is also the divine messenger of the gods between different worlds. He bridges humankind and heavenly orders – so all the sacrifices are made to him in order to go to numerous deities in the cosmos. He has the ability to transfer offerings across existences and is the link between heaven and earth.

The brother of Lord Indra is ever young and immortal, being lit and re-lit every day. His name itself literally means fire – Ignis (Latin) and Agni (Sanskrit). He is equivalently said to be the fire of the colossal sun and countless stars, of powerful lightning and of the hearth that men light for worship. While other gods exist faraway in different realms and have personified representation on earth, he is the one who remains closest to man in an elemental form. In fact the Fire God is the contact point of all gods and he is said to encompass them as the circumference of a great wheel, with each god being a spoke.

In the sacred Rig Veda he is sometimes addressed as Lord Rudra, who is regarded by scholars to be a precursor of Lord Shiva. Though the Guardian of the South East has no major sect in modern Hindu practices (except a handful of Agnihotri Brahmins), he is invoked in all religious ceremonies and pujas. Alongside Lord Indra and Lord Varuna, he is a part of the three supreme Vedic gods who once ruled the roost. Gradually across centuries without losing his esteemed standing he successfully transitioned into the complex tiered Hindu pantheon of deities. 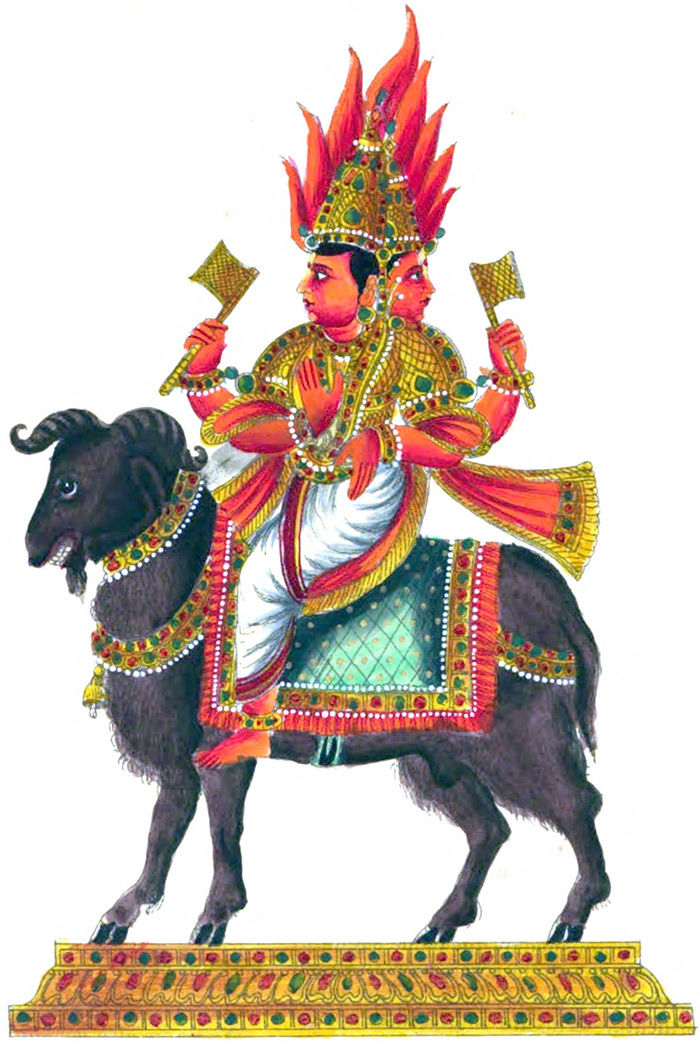 In most scriptures, Lord Agni is described as a ruddy-faced and double headed divine being. While one face is benevolent and marks immortality, the other face is malevolent and denotes the mysterious symbol of life. His hair is his most amazing feature as it stands on end like fiery glowing flames. His dark eyes peer through against his flushed red skin. The Fire God wears a spectacular garland of beautiful fruit. Some accounts say that he has three tongues while others say seven. Lord Agni has three legs and seven arms and his vahana or vehicle is his prized ram. Flames of fire shoot out from his mouth and seven streams of glory emanate from his body.

According to one of the famous hymns from the Rig Veda, Lord Indra and the other gods were summoned to kill the Rakshas who were flesh eaters or Kravyads. Agni was a Kravyad himself whose flames consumed dead bodies. While the other gods were baffled by the demons, Agni devoured his enemies by producing two iron tusks. He further heatd up his seven streams and drove them through the hearts of the Rakshasas. Another famous tale is how he even overcame his brother the Lord of Thunder and Rain to burn down the Khandava forest in order to regain his strength.

Similar to Lord Indra’s origin, there are several versions of the story of the birth of Lord Agni. Some accounts say that he is the son of the Sky God Dyaus and Earth Mother Prithvi. Others claim that he is the son of Brahma and is thus called called Abhimani. He is also said to be the son of Kashyapa and Aditi. So he is an Aditya just like Lord Indra. Later day scriptures attribute his origin to Angiras, the king of Pitris (the fathers of mankind) and there are many hymns dedicated to this form of the Fire God.

The swift messenger of divine and earthly communication is known by many appellations. The most prominent ones include Vahni (burnt sacrifice), Chhagaratha (he who rides the ram), Saptajihva (7 tongued one), Dhananjaya (who conquers riches), Vitihotra (he who purifies the worshipper), Jivalana (the one who burns) and dhumketu (whose symbol is smoke) amongst others. He is believed to be a great sage and the most divine one of all. He is the protector of all ceremonies so whether marriage or death, his presence is a must. He enables mortals to justly serve the gods in the proper manner and which they cannot do without him in the process of puja. He even joins earth-visiting gods and shares the reverence that they receive in temples, homes and shrines. According to the Vishnu Purana he married Swaha, by whom he has three sons – Pavaka, Pavamana and Suchi. Hence, when offerings are made to Agni, Swaha’s name is always taken while reciting ‘Om Namaha Swaha’. 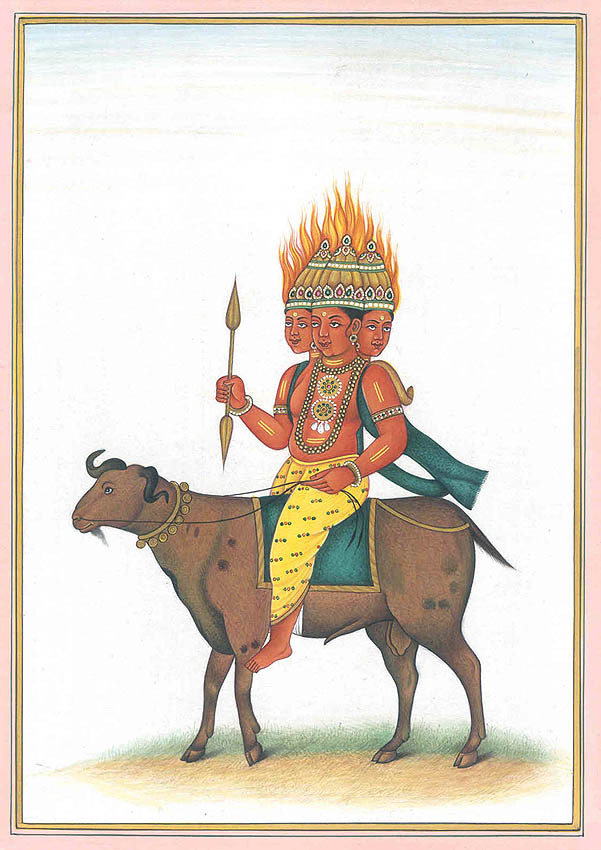 Lord Agni’s dwelling place is the most fascinating and unique. He dwells in every abode and lives with every worshipful family that light a fire, a lamp or an incense flame. This supreme mediator between god and man is thus also known as the Lord of the House and blesses those who absorb the sacred warmth of his fire. He is also a welcoming entity for other gods as he sustains lamps during various Indian festivals and greets gods as they enter the homes of mortals.

Praying to Lord Agni ensures several lifelong benefits including success and material wealth. He nourishes those who offer food and protect worshippers from enemies. In fact he is present in all phases of mortal life – when diyas are lit honoring birth, during birthdays when lamps or candles on cakes are lit, and prayers during the coming of age ceremonies. Of course the Fire Lord presides over Hindu weddings as the holy union happens during the seven pheras (the bride and groom encircle the fire seven times) before being pronounced man and wife. Lord Agni is said to help man tide over calamities and also forgive sinners by showing them the light and guiding them in inner reflection. At funerals, at the time of cremation the Fire God warms the immortal part of the deceased, and in his most auspicious form accompanies souls on their journey to the heavens.

Thus Lord Agni is invoked for all temporal good – wealth, food and liberation. 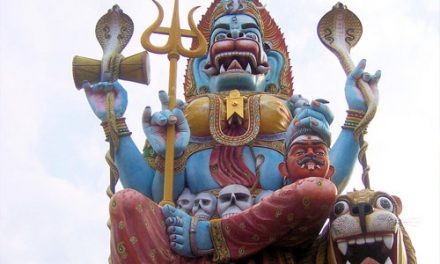