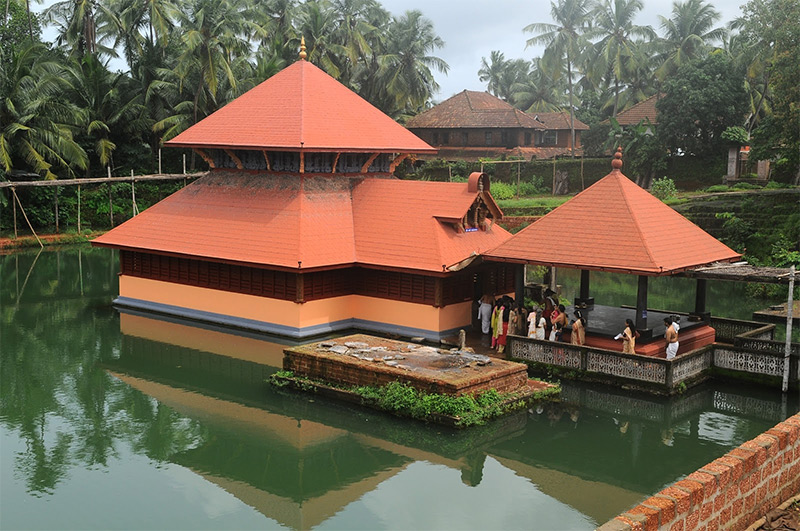 Ananthapura Lake Temple in Kasaragod, built in the 9th century, is the only lake temple in Kerala and is the moolasthanam (original abode) of Ananthapadmanabha, the deity of Sree Padmanabhaswamy Temple in Thiruvananthapuram. The garbhagriha of the temple is reachable only by a bridge. What is most amazing about the temple, is that a vegetarian crocodile has been guarding the temple for hundreds of years.

Brief History of the Temple

The past of the temple is still obscure except for some legends. It was at this place where Divakara Muni Vilwamangalam, the great Tulu Brahmin sage, did penance and performed poojas. Legend has it that one day Lord Narayana appeared before him as a child. The boy’s face was glowing with radiance and this overwhelmed the sage. He became anxious and asked who he was. The boy replied that he had no father no mother and none at home. Vilwamangalam felt pity for the boy and allowed him to stay there. The boy proposed a condition that whenever he feels humiliated he will leave the place at once. He served the sage for sometime. But soon his juvenile pranks became intolerable for the sage and he reacted violently. Humiliated the boy disappeared from there after proclaiming that if Vilwamangalam wants to see him he would have to go to Ananthankat, the forest of serpent god Anantha.

Vilwamangalam soon realized that the boy was none but the lord himself and he had great repentance. He found a cave at the place where the boy disappeared and he proceeded further into the cave in search of the boy. He reached the sea and proceeded further toward the south and at last he reached a woody area near the sea. Vilwamangalam saw the child who soon disappeared into huge illippa tree (Indian butter tree or Mahua tree). Immediately the tree fell down and assumed the shape of Lord Vishnu lying on a thousands hooded serpent. 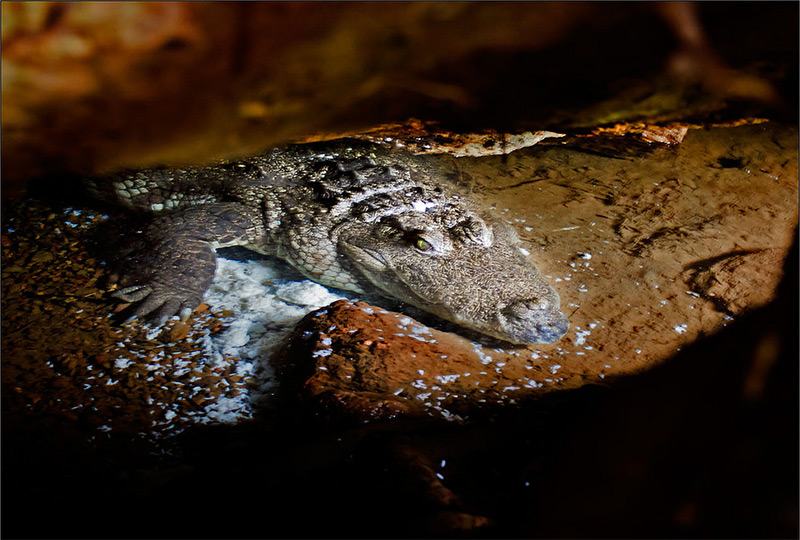 From very ancient times, one crocodile has been seen there. Though devotees used to take bath in the tank there is no instance of it harming anyone. Babia is the name by which this guardian is known by the devotees. It is the local guardian and the messenger of the temple. The only food that Babia takes is the offerings of the devotees. Usually it is a special gruel made of rice and molasses. After the worship, the food offered by devotees (prasadam) is given to Babia at noon. Temple authorities claim that Babia is a vegetarian and has never harmed anyone including the fishes in the pond.

There is an interesting local legend that narrates the entire story behind the guardian crocodile. Once Sree Vilvamangalathu Swami, devotee of Lord Vishnu, was doing penance for his favourite Lord. While he was in his prayers, Lord Krishna in the form of a little boy appeared and started disturbing him. Being annoyed by the behaviour of this child, the saint pushed Lord Krishna aside with his left hand. The boy immediately disappeared into a nearby cave and the truth dawned on the saint as to who the boy was. The crevice into which Krishna is said to have disappeared is still there. The crocodile guards the entrance and the shrine. 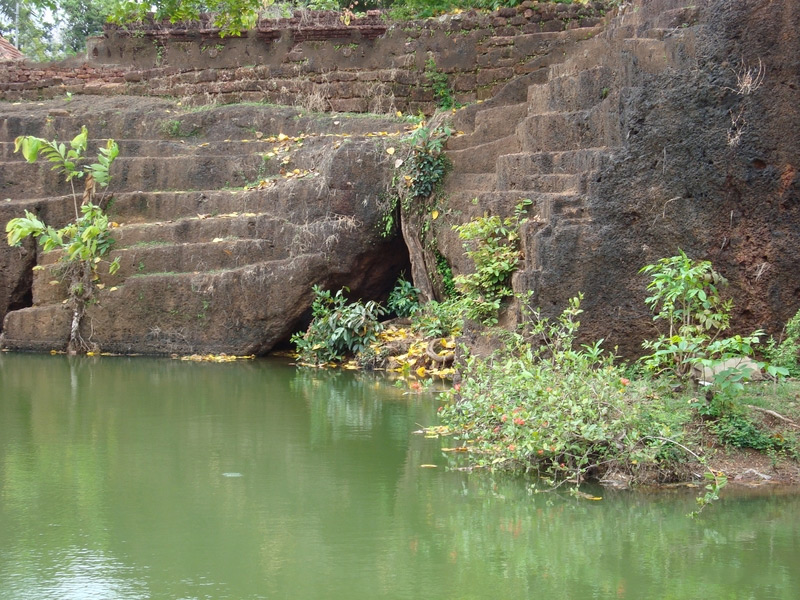 The cave where the devotee crocodile resides.

In 1945, when the British soldiers were stationed there, one soldier shot dead the crocodile. To the surprise of everyone the soldier died within few days by a snake-bite. People believe it to be a curse by the serpent god Anantha. Soon another crocodile appeared in the tank and even now if one is fortunate one can see it. The legend goes that there is only one crocodile in the lake at a time. When one crocodile dies, another one appears in the lake. The devotees pay great respect to this crocodile.

The temple is unique in its structural aspects for it is erected in the middle of an impressive lake of 302 feet. The lake is gifted with a perennial supply of pure spring water. We can find the ruins of temples all round the lake which stand testimony to the fact that it was part of a great temple complex. The sreekovil (sanctum sanctorum), namaskara-mandapam, thitappalli, and shrines of Jala-Durga and the entrance of the cave are located in the lake. The namaskara mandapam is connected to the eastern rock by a foot-bridge which is the only passage to the sreekovil.

The principal deity is Lord Vishnu. One of the key features of the temple is that the original idols in the sanctum sanctorum were not made of metal or stone, but of a rare combination of more than 70 medicinal materials called `kadu-sharkara-yogam.’ These idols were replaced by panchaloha metals in 1972. They were donated by Kaanchi Kaamakoti Mathaadhipathi His Holiness Jayendra Saraswathy Thiruvatikal. Efforts are going on now to reinstall the idols made with `kadu-sharkara-yogam.’ The Lord Vishnu idol is in a sitting pose over a five-hooded serpent king Lord Anantha. The lake temple is open to all visitors regardless of caste or creed. The District Tourism Promotion Council has plans to preserve the temple and its surroundings for its uniqueness. 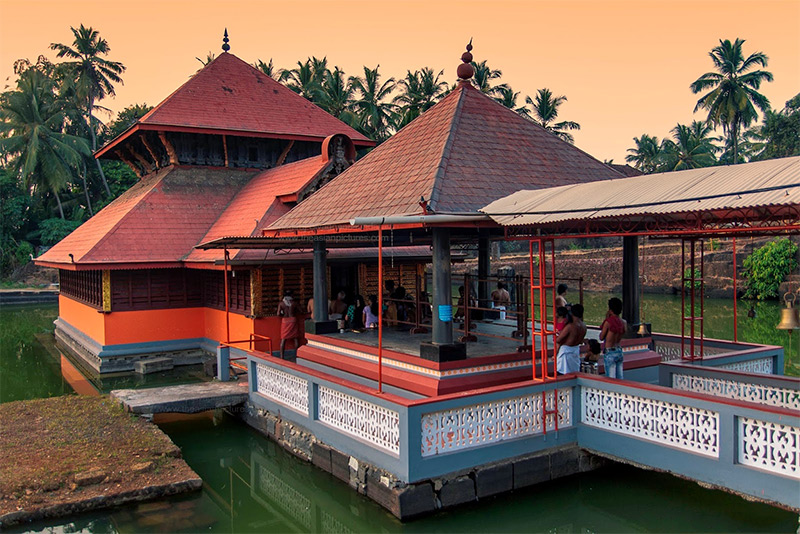 The temple has an excellent collection of wood carvings on the ceilings of the mandapam. These carvings depict the incidents taken from the stories of dasaavatharam (the ten incarnations of Lord Vishnu). Some of them are painted. The Nava-grahas (nine planets) are painted at the muktha-mandapam. On either side of the sreekovil dwaara-palakas (jaya and vijaya) are beautifully carved in wood. 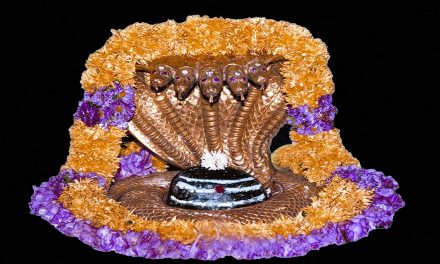 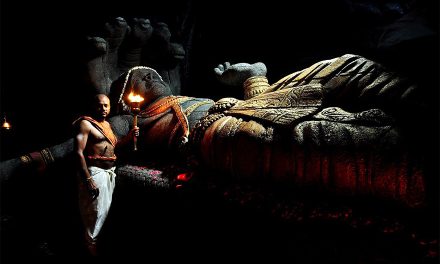