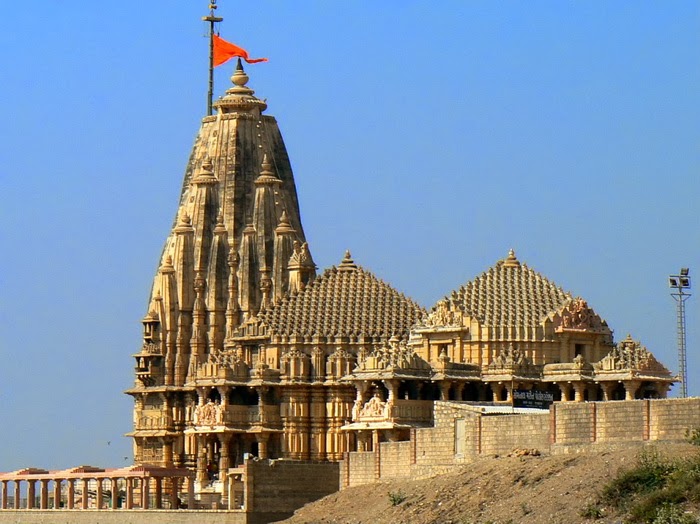 The City of Dwaraka is best known as the home of Lord Dwarkadisa, who resides in His Jagad Mandir. The Dwarkadish Temple describes how Sri Krsna became Dwarkadish in this way:

“Jarasandha, father-in-law of Kansa, attacked Matura on seventeen different occasions and on each occasion under the leadership of Shri Krishna, the people of Mathura bravely repulsed the attack. Krishna realized that the real strength of Jarasandha was his reliance on Hans and Dhimak, who were on Jarasandha’s side. So with a great deal of foresight, Shri Krishna cleverly got Hansa and Dhimak killed. This was the policy of war.

Shri Krishna had to fight the large majority of people who were materialistic and evil-minded. Jarasandha was frightened after the death of Hansa and Dhimak, and his army lost confidence.
Jarasandha, with great effort, once again built up his army and invaded Mathura for the 18th time. On this occasion Vikadru, a member of the Yadav assembly spoke the bitter truth, saying ‘Krishna, we have limitless love for you. We cannot compensate for your obligations on us. Yet these invasions are because of you. The civic life of Mathura is completely disrupted. Commerce and trade have been ruined. The people are not able to attend to agricultural duties and as a result the progress is hindered. And on the top of all, the danger of one more invasion of Jarasandha is hanging over Mathura. Hence in these circumstances, for the good of the people I request you to leave us. It is bitter but it is the truth. Please consider, Shri Krishna your followers are not sentimental. They cannot remain sentimental because of your teaching. Therefore, I as your devotee tell you the truth without fear.’

The entire assembly was stunned and silent. Shri Krishna’s father, Vasudev, supported Vikrendu in assembly. Shri Krishna realized that the republic had to face many dangers because of him, and He decided to leave Mathura. Thus He proved that He not only advised, but also lived accordingly.

He advised the Yadavas,’ I have taught you true culture. Live according to the ideals and impart these teachings to others. I will leave Matura and go to Dwarka, in Saurashtra.’

Thereafter Shri Krishna crossed Gomantak (Girnar Mountain) went to Saurashtra, where he built Dwarka City (the City of Gold) at a distance of 20 miles from Prabhas Patan (today’s Veraval Somanath). Shri Krishna appeared to have settled in Dwarka, though his mind was engaged in re-establishing a kingdom based on the principal of true religion. And he made Dwarka, the empire which is based on the principal of true religion, called Dharma Rajya in true sense. Here he become known as the ruler of Dwarka, Shri Dwarkadhish.”

We return now to excerpts from the final segment of the series on Dwaraka by Vipul K. Shukla:

Dwarka is a city of temples, ghats and seashore. Apart from main Jagadmandir, there are many temples in the city to visit. The small city sometimes reminds of the charm of Varanasi. There are small narrow streets (also known as ‘pole’) with cows sitting on the road. The city is amazing clean, being cleansed thrice daily.

The main sites are Shamalshah Temple, where Lord Krishna in the form of Shamalshah accepted the hoondi (remittance) of his devotee Narsimhn Mehta of Junagadh, Kukalash Kunda, Swaminarayan Temple, Gayatri Shaktipitha, etc. It is said that a devotee who visits Dwarka has to visit Siddheshwar Mahadev and Rukmini Temple. Without having darshan of these temples the pilgrimage is believed to be incomplete.

Near Jagadmandir temple, about 200 meters out there is a small but beautiful temple of Bhadakeshwar Mahadev in the sea. The devotees can experience peace by having darshan, sitting on the benches in the temple.

About 4 km from Dwarka, Siddhi Vinayak temple also catches the attraction of devotees, and it’s known for providing tatkal fal (immediate results) to the devotees. On the same road, a temple of Indreshwar also has religious importance. The scriptures state that Arjuna, son of King Indra, performed penance here in the form of monk, and abducted Subhadra, sister of Lord Krishna.

The Gugali Brahmins are a dominant community in Dwarka. The daily rituals in the main Mandir and other importance temples of Dwarka are performed by Gugali Brahmins. When Lord Krishna formed Dwarka as His new capital, in order to purify the land of Dwarka, He invited the Brahmins to perform a yagna of Gugal (a fragmented gum). This group of then became known as the Gugali Brahmins.

Many devotees travel the Dwarka-Porbandar-Somnath circuit. Porbandar is 75 km from Dwarka. The devotees first visit Harsiddhi Mataji Temple on the seashore before Porbandar. The distance between Porbandar and Somnath is about 150 km. The entire journey by road is memorable, as the most of the ride travels along the coastal belt.

Local private buses depart daily from Dwarka at 8 in the morning and reach Somnath at 2 afternoon, with stops at Mool Dwarka and Harsiddhi Mataji temple.

When traveling to Nageshwar, Dwarka and surrounding places, three full days are recommended to get a real feel for the entire land of Okhamandal. Some devotees also complete Dwarka travel in a day with Nageshwar Jyotirlinga and Bet Dwarka, but that allows too little time to visit the holy sites. 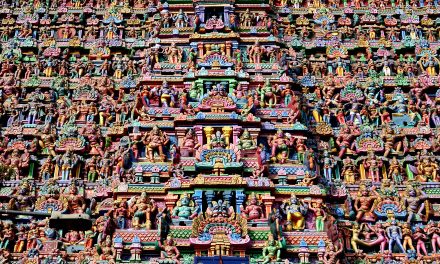