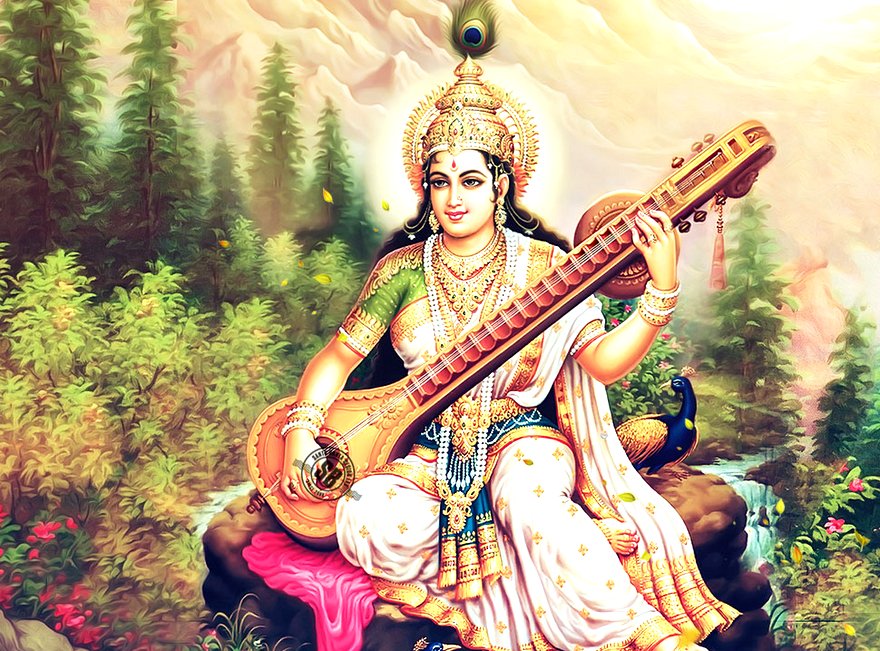 Goddess Saraswati (Saraswatee) is a revered and popular household name among the Hindus of India. She is the personification of knowledge and purity. The well-known Sanskrit writer Dandin refers to her as sarvashukla saraswate (all-white Saraswati).

In many parts of India, the annual worship of Saraswati (Saraswati Puja) in the months of February/March is an important festival, especially in the educational institutions where she occupies the pride of place over any other deity. The pot-bellied elephant god Ganesh also is worshipped on Ganesh Chaturthi, but more as the prime remover of obstacles (vighneshwara) than anything else. In certain states of western India, Ganapati is the more popular of the two deities.

When you look at any image of Saraswati, an idol or a picture, the thing – apart from the white Saraswati herself – that comes to the notice immediately and prominently, is the musical instrument Veena. The sage Yajnavalkya has said, ‘One who is skilled in veena-play attains salvation without effort.’ This Veena in the hands of Saraswati stands for a number of things in a number of ways. What are they? Here is a list.

1) Veena is not an ordinary lute, it stands for jnaana veena, the icon of all knowledge (religious and secular, spiritual and worldly). When theVeena is played and the musical notes are produced, it is as though knowledge is radiating out in all directions.

3) Veena is seen as the abode of divinity with each of its physical part signifying the seat of some subtle aspect of god or goddess. The instrument’s neck is Shiva, the strings are Parvati, the bridge is Lakshmi, the secondary gourd is Brahma, the dragon head is Vishnu, and the resonating body is Saraswati. Thus Veena can be said to be the source of all happiness.

4) Veena represents the entire system of Indian music and is the generic name for all stringed instruments. There is one Sruti Veena on which 22 srutis can be produced simultaneously.

5) Veena (music) symbolizes life and the strings represent the various feelings. The musical sound of veena is closest to human voice (female).

6) The sound of veena stands for the primordial sound of creation. This sound filled the universe with vital energy Praana. Naarada, the mind-born son (maanasa putra) of Brahma, always carries a veena with him. In fact, Veena is Narada’s signature. 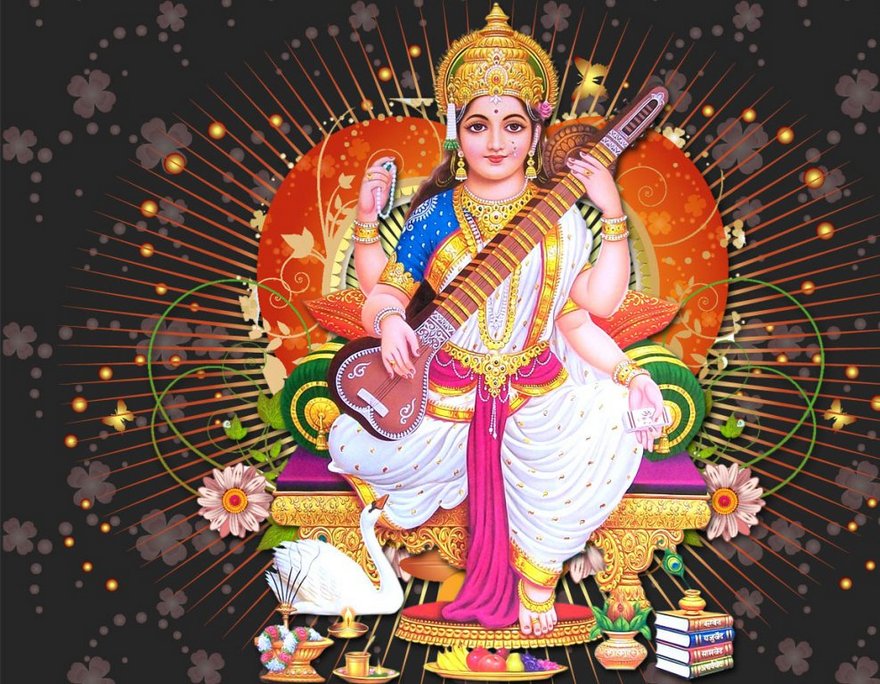 7) The sound of Veena represents the melody of mantras (the laws or formulas) that brought order to the initial chaos at the time of creation.

8) Vibration of veena is divine knowledge that flows like the water of a river when the instrument is played.

9) The veena placed in the hands of Saraswati is the most evolved string instrument in a given age.

11) Knowledge should be imparted skillfully and artistically similar to the manner of playing a veena.

12) Divine name of veena is ‘kachchapi‘, a female tortoise. Just as a tortoise withdraws its sense organs when not in action, so also one desirous of attaining spiritual knowledge should have introversion. Only one who is withdrawn from the sense objects like a tortoise can attain excellence in playing veena and enjoy its music fully.

13) The reason why some artists make the upper hand of veena in the form of tortoise is as follows. A female tortoise, after laying her eggs, covers them with sand and then goes about doing her other duties while keeping watch on them. In a similar manner, Saraswati, after giving spiritual birth to many of us through veena, protects and nurtures us.