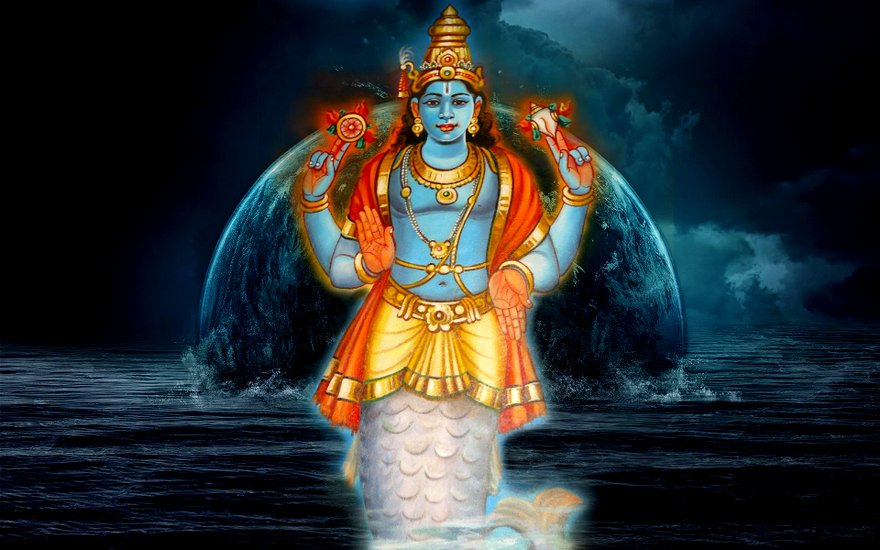 During the deluge before the latest re-creation of the universe, the four Vedas (the Holy Scriptures) which were required by Brahma for the re-creation were drowned deep in the waters.

Vishnu took the form of a fish to retrieve the sacred scriptures. Another legend has it that Vishnu in his Matsya Avatar instructed Manu (the progenitor of mankind in each creation) to build a huge boat and gather samples of all species in it. The Matsya then pulled the ark to safety through the deluge and floods to enable Brahma to start the work of re-creation.

One day while bathing, Satyavrata (also called Manu by some) accidentally catches a small fish in his hands. To his surprise, the fish looks at him and starts talking to him. It asks Manu to save its life and protect it in return for which the Matsya will protect Manu from an impending flood about which it is aware of.

At this point, the fish asks Manu to build himself a boat and be ready for the impending flood. It also instructs him that when the flood waters increase, he should think of the fish that will then come over to help him out.

When the flood begins, Manu boards the boat and then prays to the fish for assistance. The fish then appears and ties the boat to a horn that has grown on its head. It uses the serpent Vasuki as the rope to tie the boat to its horn. The fish then tows this boat to safety and takes Manu to the highest and driest point left on the earth.

It is told that as the matsya swam through the flood waters he discoursed as Manu on the various topics and revealed to him the knowledge of the Vedas, Puranas, Samhitas and the Supreme Truth. 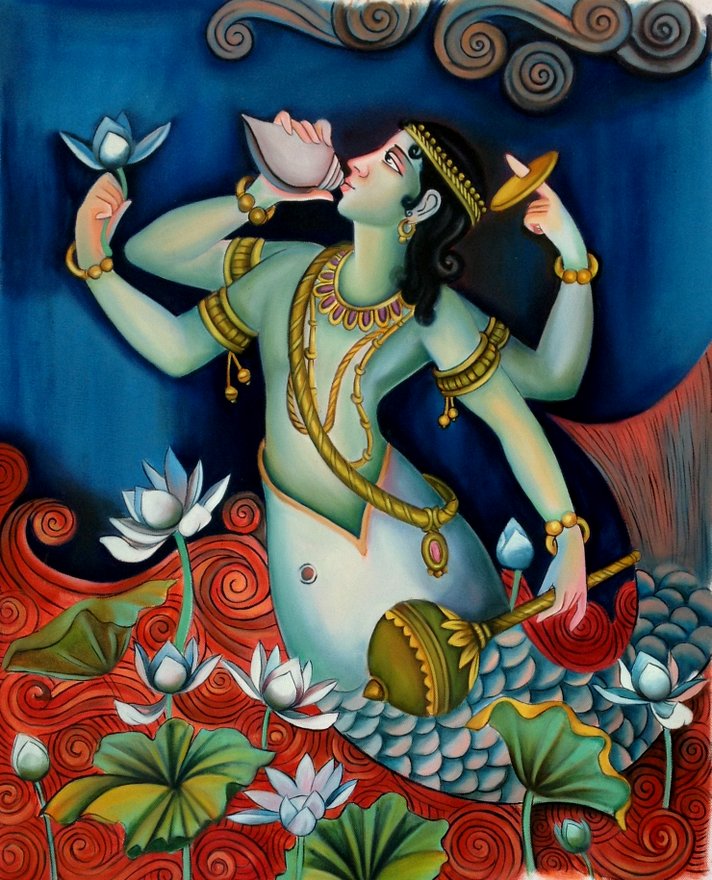 Some versions also have the matsya instructing Manu to collect seeds of all types of plants and assembling the saptarishis (seven great sages) on the boat that is then rescued by the great matsya.

The story of a great Deluge is found in many civilizations across the earth. It is often related to the Genesis narrative of the flood and Noah’s Ark. The fish motif and saving of the scriptures from a demon being additions in the Hindu tale. Similar flood myths also exist in tales from ancient Sumer and Babylonia, Greece, the Maya of Americas and the Yoruba of Africa.

Matsya is believed to symbolise the first stage of evolution, as aquatic life was the first beings on earth. The tale of Matsya may be interpreted as a creation myth where Manu creates beings of the world and men after they destroyed in the flood, though the creation is never the focus of the legend. Some authors consider the tale not a flood myth, but symbolic in nature. Manu’s boat is representative of moksha (salvation), which helps one to cross over.

Himalayas is treated as a boundary between the earthly existence and land of salvation beyond. God as the fish guides one to salvation. The horn of the fish is symbolic of “sacrificial values”. The presence of fish seems to be an allusion to the Indian “law of the fishes”, an equivalent to the “law of the jungle”, when the fish seeks protection from being eaten by a larger fish.

Treated as a parable, the tale advises a good king should protect the weak from the mighty, reversing the “law of fishes” and uphold dharma, like Manu, the progenitor of mankind and in particular two royal dynasties, thus an ideal king. In the tales where the demon hides the Vedas, dharma is threatened and Vishnu as the divine Saviour, rescues dharma, aided by his earthly counterpart, Manu – the king.

By worshiping him, through his grace generally one gains health, wealth, Pease and prosperity and specially one gets cured of rare skin diseases and gains abundant wealth. Where ever Bhagavan Sri Matsyanarayana’s presence is there all the Vastu Doshas will get nullified.

1. Place the Yantra in the water filled plate in such a way that it will get immersed in water and worship it daily.
2. Replace the water regularly.
3. After worshipping the Yantra chant the Matsya Maha Mantra 108 times (facing east or north) daily.