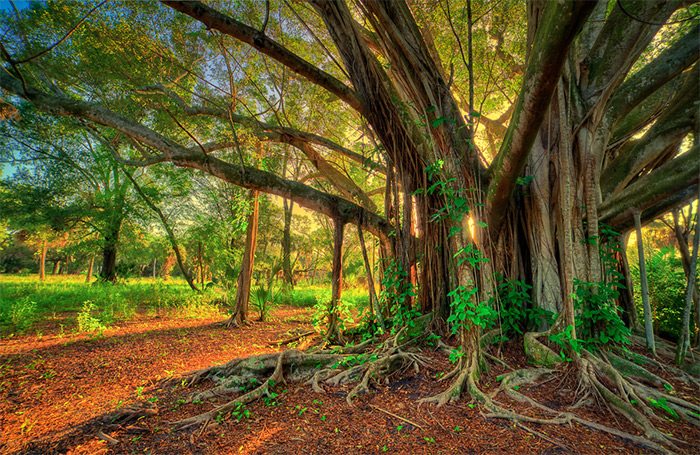 Trees are sacred in India, and often associated with a god or a goddess. Some scholars believe that it is the tree that was worshipped first, maybe for its medicinal or symbolic purpose, and that the gods and goddesses came later. That may be the case but today trees are an integral part of a deity’s symbolism. The mango tree, for example, is associated with the love-god Kama, the Tulsi plant is dear to Vishnu, Bilva is associated with Shiva worship, blades of Dhurva grass is offered to Ganesha, Neem or Margosa is sacred to the mother goddess, coconut and banana is associated with Lakshmi.

The Banyan tree is associated with Yama, the god of death and the tree is often planted outside the village near crematoriums. It is believed to be the abode of ghosts. Vetals and Pisachas are supposed to hang from its many branches.

Indians knew the Banyan tree as the Vata-vriksha. When the British came to India, they noticed that members of the trading or Bania community used to gather under a large shady fig tree, which they named the Banyan, from Bania. Technically, Ficus benghalensis, the Banyan belongs to the Fig family. There are various types of fig trees all over the world, some of these are sacred. The most popular one is the Ficus religiosa or the Pipal which became especially popular in Buddhist times because it was under this tree that Gautama Siddhartha of the Sakya clan attained enlightenment. It was the leaves of a fig tree that Adam and Eve used to cover their nakedness in Eden after they were tempted to eat the Forbidden Fruit by Satan.

The Banyan tree does not let a blade of grass grow under it. Thus Banyan tree does not allow for any rebirth and renewal. While Banyan offers shade from the sun, it offers no food. That is why it is not part of fertility ceremonies like marriage and childbirth where food-giving, rapidly renewing, plants with short lifespan such as Banana, Mango, Coconut, Betel, Rice and even grass, are included.

Marriage and childbirth are rites of passage; they represent major shifts in life. They are all about instability and flux; Banyan tree is the very opposite. It is stable and constant. It has a long lifespan and hence seems immortal. Its roots descend from the branches and then anchor the tree to the ground, transforming into trunks eventually, so that decades later it is difficult to distinguish root from stem.

Things that evoke the notion of immortality become auspicious in India, for example the immortal mountain, the immortal sea, the immortal diamond, and the indestructible ash. This is because since ancient times, Indian seers were acutely aware of the transitory nature of things around us. Everything dies – every plant, every animal, even moments die, the present becomes the past in an instant. In an ever changing world, we seek constancy, permanence. The Banyan tree is therefore worthy of veneration; it is evergreen and shady, hence an eternal refuge for all creatures unable to bear the vagaries of life.

Thus, it emerges that in Indian thought, there are two types of sacredness – one that is associated with impermanent material reality and the other which is associated with permanent spiritual reality. The Banana and the Coconut fit into the previous category; the Banyan fits into the latter. Banana is the symbol of the flesh, constantly dying and renewing itself. Banyan is the soul – never dying, never renewing itself. Banana is the botanical equivalent of the householder while Banyan is the botanical equivalent of the hermit.

Mahabharata tells the story of a woman called Savitri who lost her husband as destined, one year after her marriage, near a Banyan tree. She followed Yama to the land of the dead and through determination and intelligence managed to secure back her husband’s life. In memory of that event, Hindu women go around the Banyan tree, tying seven strings around it. This is imitative magic: by symbolically going around the immortal tree, the women are binding immortality into their married life. They are securing the lives of their husband, the pillar of their household. They are protecting themselves from widowhood which is believed by most Hindus to be the worst fate for a woman.

Under the Banyan tree sat the sages of India – those who rejected the flesh and the material world and aspired for the soul alone. This was the favorite tree of the sadhu, the wandering hermit. The greatest of hermits, Shiva, was often represented in its shade as a stone called the Lingam. Being an ascetic, Shiva was not part of the village; he was a hermit not a householder; he did not fear ghosts and so was comfortable staying in the shade of this immortal, never dying, never renewing plant.

In iconography, Shiva is visualized as Dakshinamurti, he who faces the south, south being the direction of death and change. He sits under the Banyan tree, the botanical embodiment of the universal soul, facing the terror of death and change stoically, unafraid because of his profound understanding of the world. At his feet sit sages who are recipients of Shiva’s wisdom. In South Indian temples, Shiva’s south facing form, under the Banyan tree, is placed on the south facing wall of the temple.

But there is one time when Vishnu is associated with the Banyan tree – it is during the end of the world when flood waters rise and dissolve all things. Sage Markandeya who had a terrifying vision of this event, saw Vishnu as a baby lying on the leaf of a Banyan tree, cradled by the deadly waves. This form of Vishnu is called Vata-patra-shayin, he who rests on the Banyan leaf. The image is rich in symbols – the whole world may seem transitory like the waves of the ocean but all life can renew itself as a baby replaces the older generation because divine grace represented by Vishnu is eternal like a Banyan leaf.