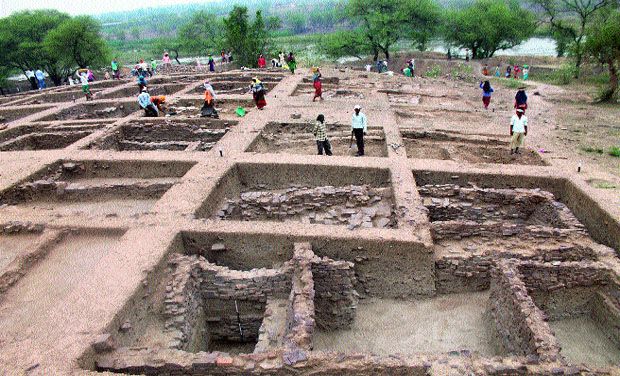 In May last year, archaeologists in India unearthed evidence of a 2,500-year-old planned city in Tarighat, Chhattisgarh, complete with water reservoirs, roads, seals and coins, buried 20ft below the ground, in a discovery billed as India’s biggest archaeological find in recent memory. Now at the same site, researchers have found remnants of a “gutted settlement” which had been completely devastated by a huge fire in around the 2nd century BC, according to a new report in the Deccan Chronicle. The discovery adds to the mystery of the ancient site, as archaeologists try to piece together its ancient past.

Excavations at Tarighat over the last year have revealed that it was a rich trading centre where its residents enjoyed an affluent lifestyle. Female terracotta figurines recovered from the site, indicate that women were fond of different hairstyles and rich costumes. In total, twelve different hair styles were identified among the figurines. In addition, numerous Indo-Greek coins were discovered, along with more than 15 varieties of beads found in large number in almost 2,000 unusual sizes, styles and shapes, which suggests that Chhattisgarh served as a significant bead manufacturing centre. Pendants, ornaments, bangles of gold, silver and copper have also been unearthed from site which had to be placed under supervision of department guards.

“These were among the most interesting times in early India,” said Abhijit Dandekar, an archaeologist at the Deccan College, Pune. “It was the end of the period of the 16 mahajanapadas (loosely translated to great kingdoms) when the Mahabharata was supposedly set, and the beginning of the Maurya empire. There’s very little known about urban structures in this period, in regions spanning modern-day Madhya Pradesh and Chhattisgarh.”

The facts surrounding the great fire which destroyed much of the settlement are unknown, but researchers are hoping that further excavation work, which given the extent of the site may take another 5 – 10 years, will help unravel the mystery. 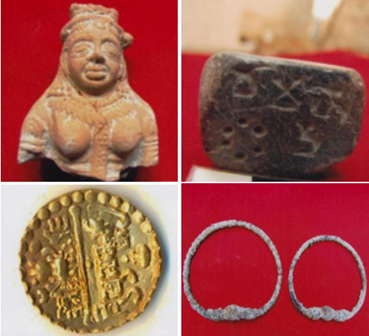 Excavations in a pre-historic site in Chhattisgarh by archaeologists have yielded tools believed to be of 10,000 years old.

The significant discovery was made at the archaeological site at Tarighat, nearly 30 km from here, where remnants of an ancient city have been unearthed recently.

“We have found tools made of various materials at Tarighat site. The tools have been assigned to microlithic period and date back to 8000 BC (10,000 years old). The artefacts have been found 20 ft below the surface,” Tarighat excavation director and archaeologist in the culture department of Chhattisgarh government J.R.Bhagat disclosed to this newspaper here on Thursday.

More than 100 tools of various materials and varied sizes have been excavated at the site recently.

The artefacts found were in shapes of blades, lunettes, scrapers, burins, and cores and predominantly instruments.

Some tools have suffered erosion in sharpness indicating that they were used items, while some others were found to be re-used.

According to Mr Bhagat, in Mesolithic period, these types of tools were integrated with wood and used for skinning the animals and cutting trees.

Incidentally, thousands of Mesolithic tools have been found scattered on the surface at Parsuldih.

Remnants of a burnt ancient city, believed to be dating back to second century BC, have been found in an archaeological site at Tarighat, nearly 30 km from here. The “gutted settlement” reminds of Roman city Pompeii that was buried under 13-20 ft of ash and pumice in the eruption of Mount Vesuvius in 79 AD.

The remains of the charred city have been found around 20 ft below the Tarighat archaeological site which came into national focus when excavation had brought to surface a 2500-year-old urban centre last year.

“A huge burnt patch of around 8 ft height was unearthed at 9-12 th layer believed to be dating back to second century BC,” Tarighat excavation director and archaeologist J.R.Bhagat said exclusively to DC on Thursday.

The site is situated on the bank of river Kharoun. 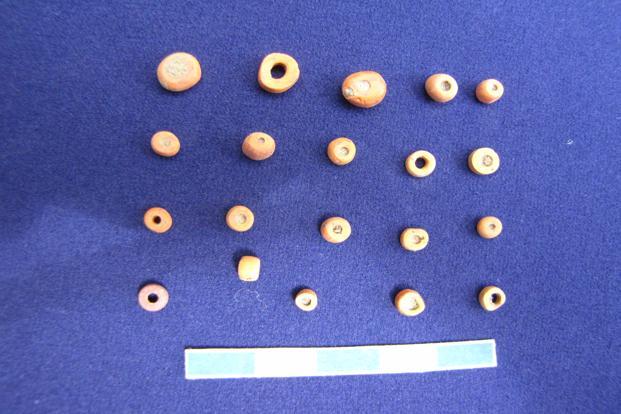 RAIPUR: After initial survey, archaeologists claim to have found remains of a 2,500-year-old city, buried at Tarighat in Durg district of Chhattisgarh where excavation work is to begin shortly.

Talking to TOI, J R Bhagat, deputy director, archaeology department, said, “The ancient city located 30km away from the capital was found buried in 2008 in Patan tehsil of Durg district. Its remains indicate that it was a well-planned settlement dating back to 2nd and 3rd century BC.”

He said it was a chance discovery during his personal visit to Tarighat in 2008 when he found some old coins, beads, pottery items, bones and some structural features on the banks of Kharun River. The Archaeological Survey of India (ASI) has approved excavation of the area, based on the initial findings, he said.

“After the completion of the process, I believe it would be counted among the biggest archaeological discoveries in Chhattisgarh. The coins and semi-precious stones appear to be from the Kushan and Satavahan dynasties,” said Bhagat, adding that the signs of burnt structures at a few places indicate that the ancient city might have been completely destroyed in a fire.

He said the area seems to have been divided into blocks which appear like a market. “Many structures were found to be facing the main road which is clearly visible between the blocks. About six to eight rooms were found on both sides of the road,” Bhagat said.

Archaeologists are conducting survey in the 10 km vicinity of Patan. “For excavation, we would have to dig about 20 feet and few patches have been marked in the region where we expect to find more precious elements,” he said.

The ancient city is believed to have been rich in ceramic culture with the discovery of a large number of pottery items including vases, basins and bowls. Also, few terracotta figures of males, females and animal figurines were traced while the whole mound was found to be covered with stones.

New Delhi: Explorers claim they have evidence of a 2,500-year-old planned city—complete with water reservoirs, roads, seals and coins—buried in Chhattisgarh, a discovery that is being billed as the nation’s biggest archaeological find in at least half a century.

The discoveries were made from Tarighat in Durg district and spanned five acres of a sparsely inhabited region beside a river, according to archaeologists from the state’s department of culture and archaeology.

“As of now, we have four 15ft high mounds around which we have evidence of pottery, coins and some terracotta figures,” said J.R. Bhagat, deputy director in the department. “Once we begin, the entire digging could take at least 5-10 years.”

The 5th and 3rd century BC—to which the Tarighat finds date—points to a period when the region was ruled by the Kushan and Satavahana dynasties in central India. While there have been extensive, previous evidence of urban growth after the first century, such finds are extremely rare for preceding periods.

“These were among the most interesting times in early India,” said Abhijit Dandekar, an archaeologist at the Deccan College, Pune. “It was the end of the period of the 16 mahajanapadas (loosely translated to great kingdoms) when the Mahabharata was supposedly set, and the beginning of the Maurya empire. There’s very little known about urban structures in this period, in regions spanning modern-day Madhya Pradesh and Chhattisgarh.”

Dandekar, who is not involved in these finds, added that evidence of towns and urbanization spanning five acres was quite significant in an Indian context, though only excavations and peer review would throw true light on the import of these findings.

He added that the excavations at Ahichhatra, near Bareilly in Uttar Pradesh, that began in 1960s were the most recent evidence of large-scale town planning in India for a comparable period and, if the Chattisgarh findings were as extensive, then it would be a significant find.

“In an Indian context, an excavation has rarely been disappointing,” said Dandekar. “If you believed there’s a city, it usually turns out to be one and bigger than what you first expected.”

To be sure, Bhagat clarified that the finds still haven’t been dated using methods such as radiocarbon or thermoluminescence dating—modern, established techniques that measure the amount of carbon or the relative proportions of other elements from which exact ages of materials are deduced—but he added that the texture of the pots, the typical pattern of raised mounds etc all pointed to evidence of an urban agglomeration.

“The kind of pottery called the Red and Black Northern Pottery, the coins, etc., at the surface of the site itself show very visible signs of complex urbanization.”

Arun Raj, a Chhattisgarh-based archaeologist with the Archaeological Survey of India, characterized Chhattisgarh as being an untapped “gold mine” for archaeology.

“We’ve just given them permission for this dig, and I think it will be some time before we understand how important this is,” Raj said. “But this region, which has been relatively unexplored due to Naxalite conflict, could throw up several such finds.”

He added that one strand of Indian archaeological research sought to find common threads urban lifestyle patterns of the Indus Valley civilization that declined around 1300 BC, to urban formations in central India. “This may possibly falsify or add more credibility to such theories,” he said.

Speed of Light in the Rig Veda 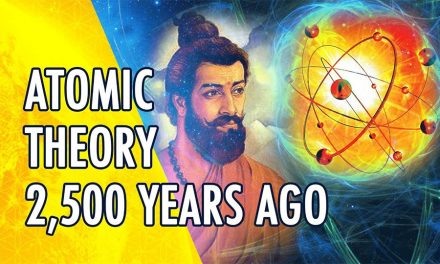 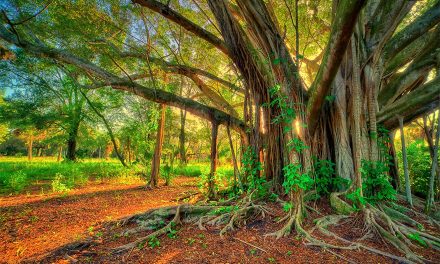 Trees – A Beautiful Gift of Nature