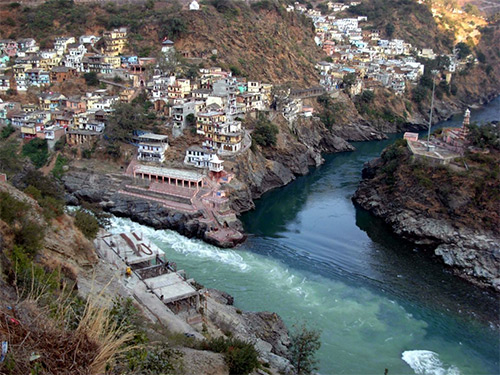 Once, long ago, a king named Bali Maharaja conquered all the planets in the universe. Ousting the demigods, the deputed managers of universal affairs, from their heavenly domains, Bali Maharaja installed himself as king of the celestial realm. Aditi, the mother of the demigods, being aggrieved at her sons’ defeat, fasted and prayed to Vishnu (God) for twelve consecutive days. Pleased with Aditi, Vishnu agreed to reinstate the demigods by incarnating as Vamanadeva, a dwarf brahmana mendicant (saintly priest).

Vamanadeva approached Bali Maharaja and begged him for three paces of land. When Bali agreed, Vamanadeva expanded His form to gigantic proportions and covered the entire universe with His first step, thus reclaiming the demigods’ lost property. With His second step, Vamanadeva kicked a hole in the universal shell with His toe, causing a few drops of water from the spiritual world to leak into the universe. This water flowed into the universe and became known as the Ganges River. The Ganges is thus considered sacred because it origi.nated from the spiritual world and because it touched the toe of Vamanadeva, the incarnation of Vishnu.

Originally, the Ganges flowed only in the heavenly plan.ets. Then a great king of ancient India, named Bhagiratha, de.sired to have the Ganges purify the earth and prayed for the river to descend. The personified Ganges, mother Gangadevi, appeared before King Bhagiratha and agreed to fulfill his desire, but she had two reservations. First, she hesitated to come to earth because she feared that many sinful people would bathe in her waters and contaminate her with bad karma. King Bhagi.ratha then assured Gangadevi that although many sinful persons would bathe in her waters, many saintly persons who can purify even places of pilgrimage would also bathe there, thus purifying her of all karmic contaminations.

Secondly, Gangadevi said: “When I fall from the sky to the surface of the planet earth, the water will be very forceful. Who will sustain that force? If I am not sustained, I shall pierce the surface of the earth and glide down to the lower regions of the universe.” To satisfy Gangadevi, King Bhagiratha prayed to Shiva, and when the king asked the great demigod to catch the falling Ganges water on his head, he agreed to the request. Since that time, Shiva has been sustaining the Ganges on his head, and her sacred water has been flowing on the earth, purifying all those who come in contact with them.

The Kumbha Mela and the Ganges River have become synonymous in the minds of many people due to their being inexorably linked through Indian religious tradition. As the Kumbha Mela is the greatest spiritual festival, so the Ganges is believed to be the greatest spiritual river. Throughout the ages, the Ganges has played a dramatic part in the spiritual lives of the Indian people. It is said that to know the Ganges is to know India and her peoples The river is strong, proud, and overbear.ing; she is also humble, peaceful, and stern; she is always changing yet ever the same.

The Ganges is worshiped as a mother goddess, Gangadevi, and her celestial water is believed to possess supernatural power. Mother Ganges is many things to many people. She is the provider for the millions who reside in the agricultural com.munities along her banks; she is the bestower of benedictions for the pious, and the redeemer of sins for the sinful; she is the healer of disease for the sick; and for the dying, she is the giver of liberation from the cycle of birth and death.

The devout deeply believe in the powers of the Ganges water. It is said that if one bathes in the Ganges or even sprinkles three drops of Ganges water on his head, he becomes freed from past sins (karma). The Ganges is believed to have such purging effects on the impurities of the soul that if one even remembers the name of the Ganges, he acquires such merit that he easily attains a place in heaven.