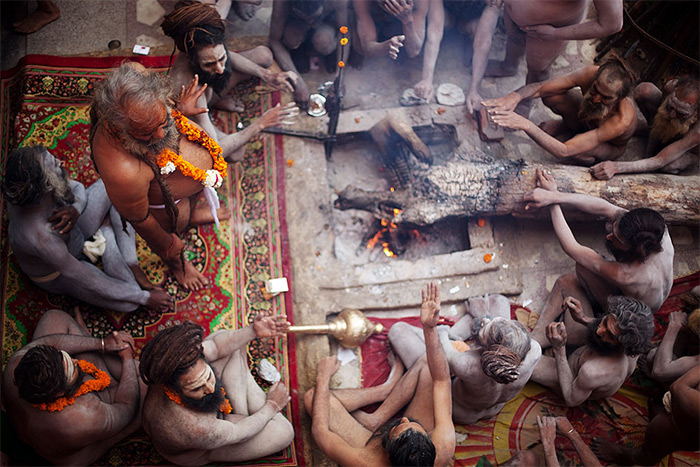 The standoff between Sai Baba followers and the akhadas took a new turn on Friday with the saints here challenging the followers of the mystic for a ‘shastarth’ (religious debate). They said that the Sai followers would have to remove Hindu gods from Sai temple at Shirdi if they were defeated, and in case heads of akhadas lost, they would stop the agitation against Sai’s worship by Hindus.

Speaking to TOI at the end of the two-day ultimatum to Sai devotees, Juna Akhada patron Hari Giri and Narendra Giri of Niranjani akhara along with others posed the challenge stating, “Whosoever loses in the ‘shastarth’ would have to follow the orders of the other.”

Patron Hari Giri said, “We have been going to Trayambkeswar, around 90 kilometres from Shirdi, and if the representatives of Sai Trust wants to accept our challenge on our beliefs based on Hindu scriptures, then we are ready.”

The issue cropped up after Hindu ponitff Shankaracharya Swaroopanand declared that Sai Baba weas not a god and the Hindus should remove his idols and photographs from temples. He ahd claimed that Hinduism was governed by shastras and vedas and there was no mention of Sai Baba in religious scriptures of Hindus.

The statement had led to many protests by Sai devotees who burnt Shankaracharya’s effigies. Similarly, scores of ?dandi sanyasins’ (staff-wielding renunciants) supported Shankaracharya and sat on fast condemning filing of a case against him at Shirdi

It led to powerful Akhara Parishad, the nodal body for the 14-odd Akharas at the centre of the Hindu order, calling for warrior saints — the Naga sadhus — to gather in Allahabad and Haridwar to take on Sai Baba’s devotees.

A day after serving 48-hour ultimatum, the akhadas on Thursday softened their stand against Sai Baba followers as no protest was staged against Shankaracharya Swaroopanand Saraswati. The akhadas maintained that there was no report of Sai Baba followers burning pontiff’s effigy or defacing or damaging his posters as threatened earlier and hence the akhadas would not indulge in any provocative activity.

Mahants of Niranjani, Nirmal and Anand akharas said that they would “adopt a wait and watch policy for the next 24-hours and formulate future strategy in the next meeting in Haridwar over weekend”.

Main disciple of the pontiff Swami Avimukteswaranand said, “From the very beginning we have been asking them not to indulge in any sort of undemocratic and ?indecent’ way of protests but I am sorry to say that they calmed down only after akhadas had to pass an ultimatum.”

He added, Shankaracharya was a freedom fighter too and his insult was an insult to those who fought for the freedom of the country.

“We are unanimous in our decision that till Friday there will be no action from our side until and unless provoked by Sai followers,” said Narendra Giri.

He said the saint community is opposed to Sai followers worshipping Sai Baba.

“They should ensure that Hindu Gods and Sai Baba are not kept in a temple and if they want to keep both, then Hindu Gods should be put above Baba,” added Narendra Giri.

Meanwhile, a meeting of all akhadas had been convened in Hardwar on Sunday to decide future course of action.

Earlier, Shankaracharya had raised a controversy by stating that Hindu followers of Sai Baba should remove his idols and photographs from temples. He had said that Hinduism was governed by Shashtra and Vedas and there was no mention of Sai Baba in them.

“Sai Baba should not be worshipped with Hindu gods… Muslims don’t revere Sai Baba as much as Hindus do, who seem unaware of the adharma they commit by worshipping him,” the Shankaracharya had said.

The Quest for the Suthamalli Nataraja