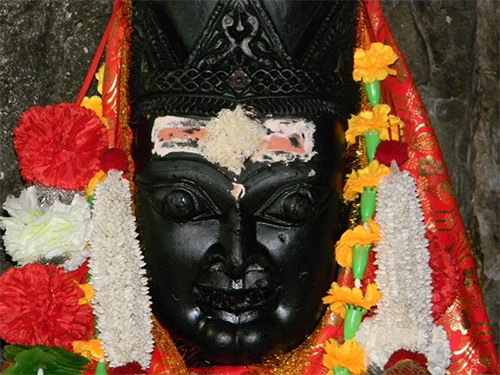 On June 15th, 2013, the ancient deity of Dhari Devi was removed from her temple to be shifted to another location to facilitate the construction of a dam, which locals were opposing ever since the conception of the project with the belief that the moving of the Dhari Devi would somehow agitate Kali. Exactly on the next day a massive cloudburst and flash flood started in Uttarakhand, which devastated Kedarnath, washing the city completely away.

This may sound like a story from a comic book, but it is not so – its reality that most people today like to ignore and push aside as superstition. The fury of the goddess is well known and any attempt to instigate her would lead to great destruction. Let us look at the events leading to the great devastation of Uttarakhand by flooding of Uttar Kashi.

The government has tried to build up dams to overcome the power shortage in the country. This has been opposed by locals and some prominent politicians like Uma Bharti and B. C. Khanduri of the BJP since it would lead to the submergence of the temple of Dhari Devi. As a result efforts to construct dams have been delayed indefinitely. Previously, in 1882, an attempt to shift the Dhari Devi shrine was immediately followed by havoc in Kedar Valley. There is some strange connection between these guardian goddess and the Kedarnath jyotirlinga. 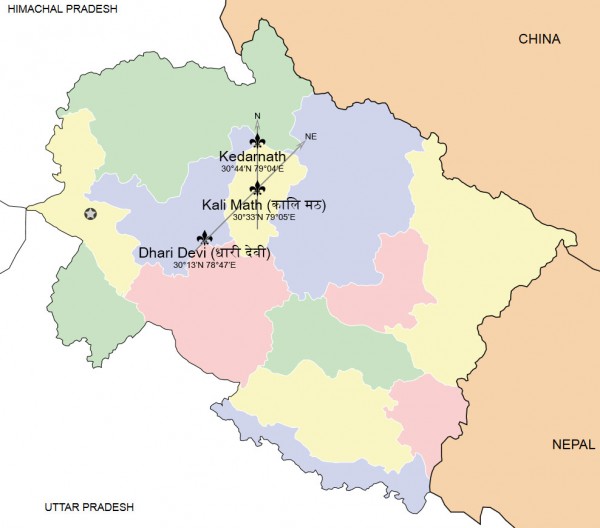 These are not just any other Shakti temples, they are among the 108 Shakti Pitha mentioned in the Devi Bhagavat. Dhari Devi is a temple on the banks of the Alakananda River in the Garhwal Region of Uttarakhand state, India. It houses the upper half of a deity of goddess Kali specifically called “Dhari Devī” that, according to local lore, changes in appearance during the day from a girl, to a woman, and then to an old lady. Perched atop a 20 metre high rock, the temple of Dhari Devi is situated on the banks of river Alakananda. One has to travel a distance of 19km from Srinagar (Pauri Garhwal) on Srinagar-Badrinath highway upto Kaliya Saur, then down trek another half a kilometer towards Alakananda river.

According to a local legened, the temple was once washed off by floods, while floating the idol struck against a rock, the villagers heard the cries of the idol. On reaching the site they heard a divine voice instructing them to install the idol as it was, on the spot it was found. Since then the fierce looking idol remains where it was, known as Dhari Devi, under the open sky, and thousands of devotees on the way to Badrinath pay their obeisance to it. The temple of Dhari Devi in Srinagar hosts only the upper part of the deity of Godess Dhari, the remaining lower part is believed to be in Kalimath in Rudraprayag district.

It is believed that the idol of Dhari Devi shall not be put under a roof. For the same reason, the deities in Dhari Devi Temple are put under open sky. Taking photographs of the Dhari Devi deities are strictly prohibited. The village near the temple is name after godess Dhari and known as Dhari Village. A hanging bridge over Alaknanda river connects the Dhari Devi temple to Dhari Village.

Now, the lower half of the idol of Kali is located in Kalimath Temple. These joint temples are aligned exactly at NE-SW direction (see adjoining image) symbolizing Kali as sleeping with her feet in NE direction and head in the SE direction.

This causes the energy to flow in the NE direction, which in jyotiṣa, is the direction of Jupiter (Ishana Shiva), the parameṣṭhi guru. The upper part of the devi with the head symbolizes the calming of Kali by Shiva, the Guru. The lower part of Kali is not in the form of an idol and instead, is worshipped as the Sri Yantra. In this manner we learn that the Sri Yantra, as established by Adi Shankara at Kalimath, is the yoni of Shakti from which all creation proceeds.

The Kedarnath jyotirlinga is exactly North from Kalimath (see adjoining image) symbolising the husband-wife or Shiva-Shakti relationship. In this, Kedarnath being to the north (Mercury direction for ahimsa) is constantly calming the devi who is in the south (Mars direction, anger, agitated and at war).

On June 15th, 2013, the deity of Dhari Devi was removed from her ancient temple to be shifted to another location to facilitate the construction of the same dam (a 330 megawatt hydro electric project which now stands in ruins), which locals were opposing ever since the conception of the project with the belief that the moving of the Dhari Devī would somehow agitate Kali. They were right in their belief as any movement would lead to a change in the angle of the Dhari Devi and Kalimath alignment, besides altering the distance. There are energies we human beings do not understand as yet and it is best to let these spiritual shrines where these energies are contain, be maintained.

With the shifting of Dhari Devi, the agitated Kali has been woken up, and she seeks the demon Raktabija (seed of blood). As per mythology, Raktabija took various bodies and she continued to destroy each one. Primarily this indicates unimaginable bloodshed and death. Exactly on the next day a massive cloudburst and flash flood started in Uttarakhand. Today, when official death figures are at 1,000 (identified people/bodies), the unofficial figure is way beyond 5,000 deaths and more are still following as the rains are returning.

Restore the idol of Dhari Devi (Kali torso) to its original shrine and start the prayers that calm her down. Shri Yantra sadhana has to be maintained at Kalimath and Bael leaf must be offered to Kedarnath. If this is done, then Kali will calm down and the agitation of nature will stop. If this is not done, then the agitation of Kali shall spread throughout India and this will prove to be one of the worst years in the history of modern India.

Predictions for the Age of Kali