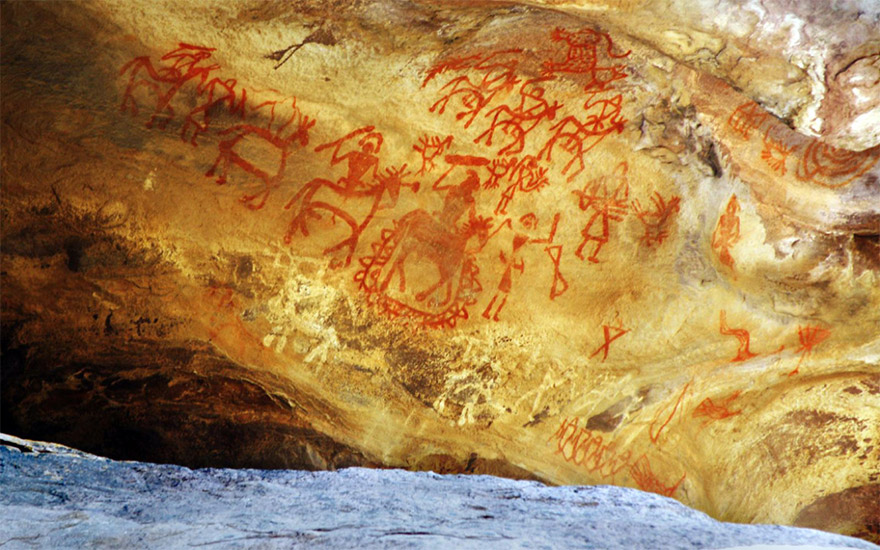 The sprawling caves of Bhimbetka are located about 45 km northeast of Bhopal, the state capital of Madhya Pradesh in India. The northern fringes of the ancient Vindhyachal ranges are home to the extraordinary rock shelters and paintings, the rocks fortifying an ancient treasure within. Seated amidst lush greenery in dense forests, rocky terrain, craggy cliffs, with the lofty rocks guarding the ancient premises, the caves of Bhimbetka present a breathtaking view.

The Bhimbetka shelters exhibit the earliest traces of human life in India. A number of analyses suggest that some of these shelters were inhabited by hominids like Homo erectus more than 100,000 years ago. Some of the Stone Age rock paintings found among the Bhimbetka rock shelters are approximately 30,000 years old ( Paleolithic Age).

Bhimbetka owes its name to the character from the epic Mahabharata. It is believed that when the five brothers, called Pandavas, were banished from their kingdom, they came here and stayed in these caves, the massive rocks seating the gigantic frame of Bhima, the second Pandava. However, these claim still remains to be corroborated with concrete evidence.

Wakankar’s serendipitous discovery brought the 700-odd rock shelters — spread over 10 km — and the stunning paintings in red or white with the occasional flash of yellow or green to world attention, causing UNESCO to declare them a World Heritage Site in 1970.

Bhimbetka was first mentioned in Indian archeological records in 1888 as a Buddhist site, based on information gathered from local tribes. The caves were eventually discovered in 1957-58 by accident. An archaeologist from Ujjain, Dr. Vishnu Wakankar, strayed too far from the beaten path and found himself amidst this prehistoric treasure trove. 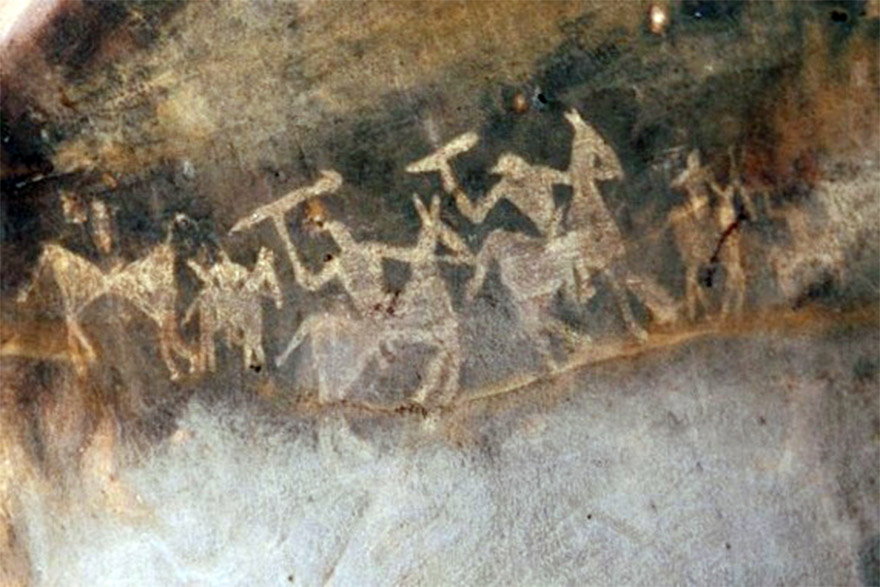 Since then more than 700 such shelters have been identified, of which 243 are in the Bhimbetka group and 178 in the Lakha Juar group. Archeological studies revealed a continuous sequence of Stone Age cultures (from the late Acheulian to the late Mesolithic ). It also has the world’s oldest stonewalls and floors. The earliest paintings on the cave walls are believed to be of the Mesolithic period. A broad chronology of the finds has been done, but a detailed chronology is yet to be created.

The caves have evolved over time into excellent rock-shelters, ideal sites for aboriginal settlements. The smooth shape of the rocks has led some scientists to believe that the area was once under water. The rocks have taken on incredible shapes in several stunning hues and textures. Apart from the central place the aboriginal drawings have in human history, the caves themselves offer interesting material for a study of the Earth’s history. 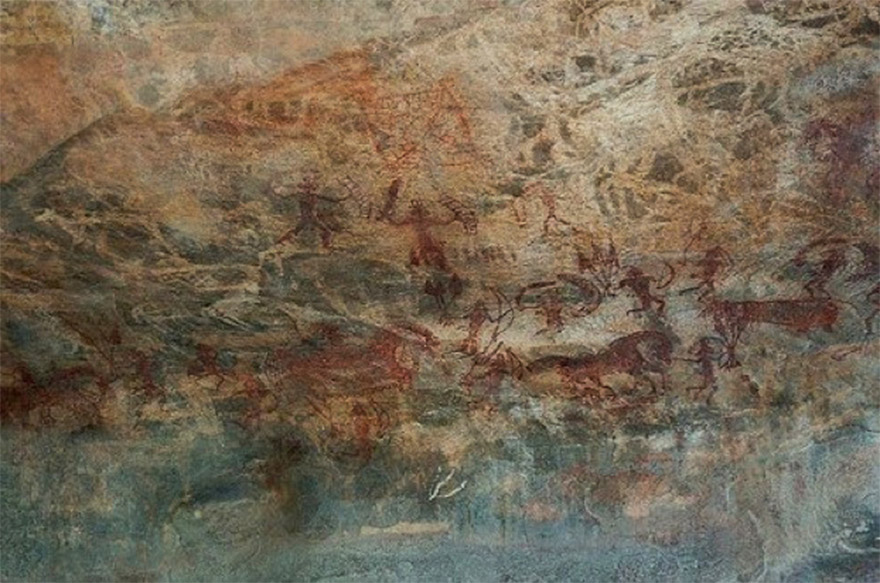 The rock paintings have numerous layers belonging to various epochs of time, ranging from the Upper Paleolithic, Mesolithic Age to the early historic and medieval periods. The most ancient scenes here believed to be commonly belonging to the Mesolithic Age. These magnificent paintings can be seen even on the ceiling of the rock shelters located at daunting heights.

Executed mainly in red and white, with the occasional use of green and yellow with themes taken from the everyday events, the scenes usually depict hunting, childbirth, communal dancing, drinking, religious rites, burials, horse and elephant riders, animal fights, honey collection, decoration of bodies, disguises, masks and different type of animals etc. It depicts the detail of social life during the long period of time, when man used to frequent these rock shelters. Animals such as bison, tiger, rhinoceros, wild boar, elephants, monkeys, antelopes, lizards, peacocks etc. have been abundantly depicted. One rock, popularly referred to as “Zoo Rock”, depicts elephants, sambar, bison and deer. 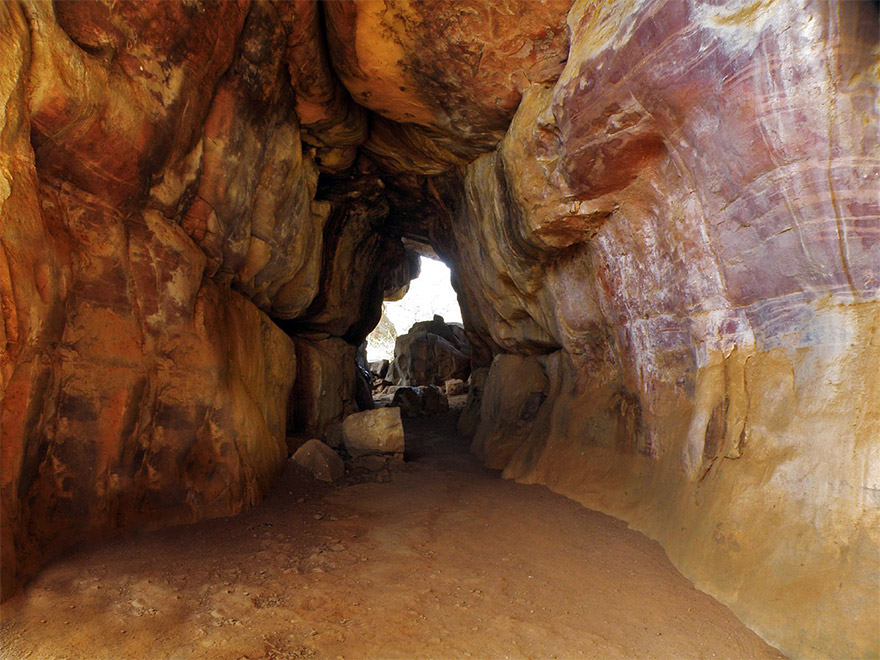 It is a marvel that the paintings have not faded even after thousands of years. The colors used by the cave dwellers were prepared by combining manganese, hematite, soft red stone and wooden charcoal. Perhaps, animal fat and extracts of leaves, vegetables, and roots were also used in the mixture. Brushes were made of pieces of fibrous plants. The natural pigments have endured through time because the drawings are generally made deep inside a niche or on inner walls. The oldest paintings are considered to be 30,000 years old, but some of the geometric figures date to as recently as the medieval period.

The rock art of Bhimbetka has been classified into various groups on the basis of the style and subject. The superimposition of paintings shows that different people used the same canvas at different times. The drawings and paintings can be classified under seven different periods. 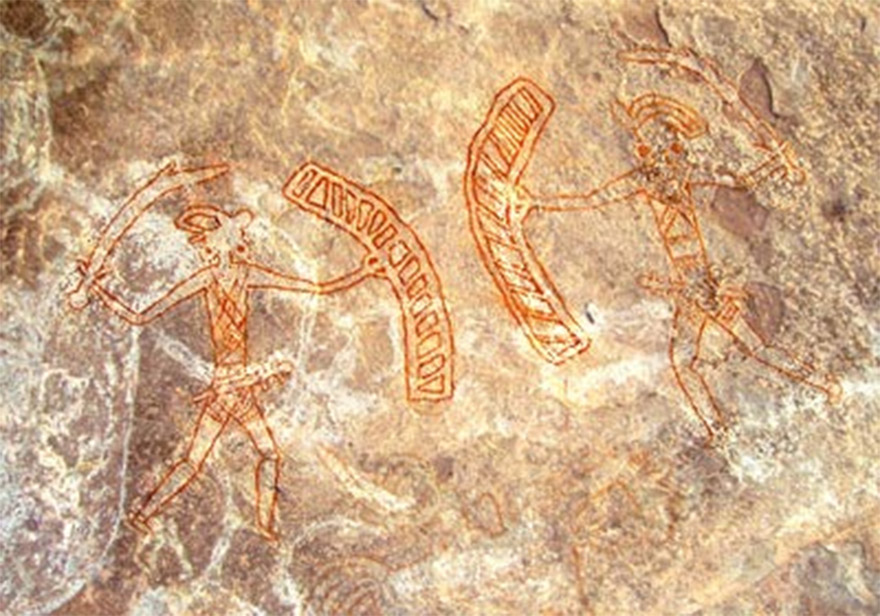 Period I (Upper Paleolithic): These are linear representations, in green and dark red, of huge figures of animals, such as bison and boar beside stick like human figures.

Period II (Mesolithic): Comparatively smaller in size, the stylized figures in this group show linear decoration on the body. In addition to animals, there are human figures and hunting scenes giving a clear picture of the weapons used in those times. These included barbed spears, pointed sticks, bows and arrows. The depiction of communal dances, birds, mother and child, pregnant women, men carrying dead animal etc. are seen in this rock shelter range. 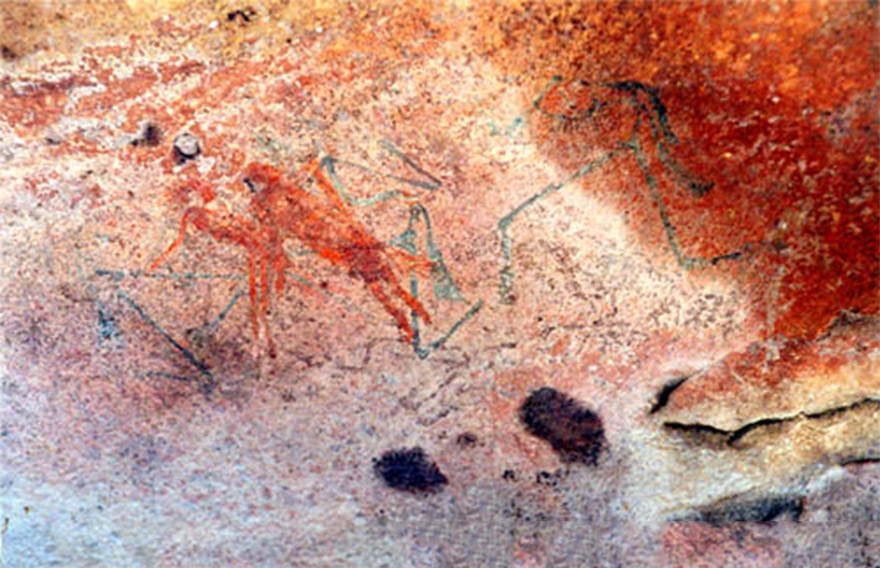 Period III (Chalcolithic): Similar to the paintings of Chalcolithic pottery, these drawings reveal the association, contact, and mutual exchange of requirements of the cave dwellers of this area with the agricultural communities of the Malwa plains.

Period IV & V (Early Historic): The figures of this group have a schematic and decorative style and are painted mainly in red, white and rarely green depicting riders, religious symbols, tunic-like dresses, and the scripts of different periods. The religious beliefs are represented by figures of yakshas (nature-spirits), tree gods and magical sky chariots. 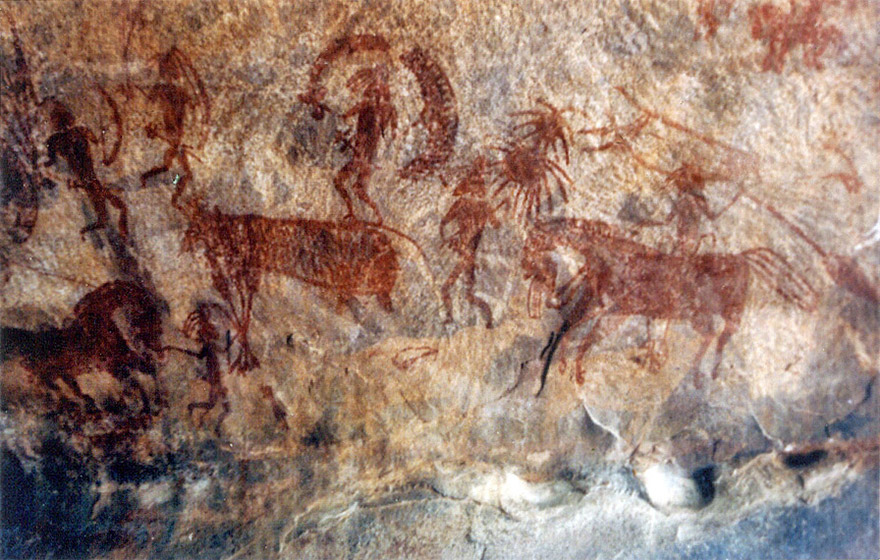 Period VI & VII (Medieval): These paintings are geometric, linear and more schematic but show degeneration and crudeness in their artistic style. Now paintings of Brahmanical gods like Ganesh and Natraja appear for the first time in these rock shelters. Thus, the high sloping face of the ceilings of these extraordinary rock shelters bear scenes, frozen in action of a long expanse of time starting from the period when man was a hunter gatherer to the time when iron technology had become quite significant. 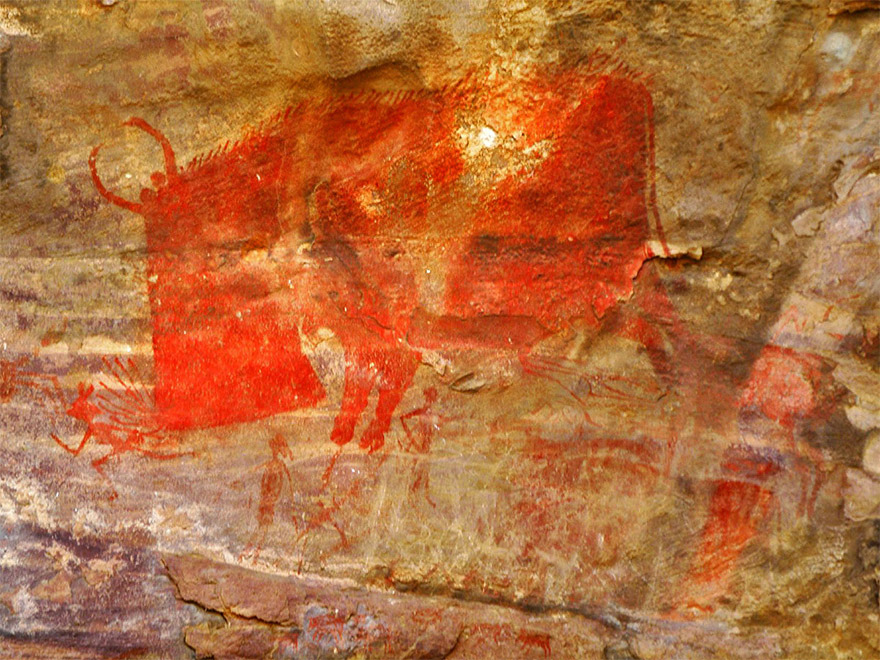 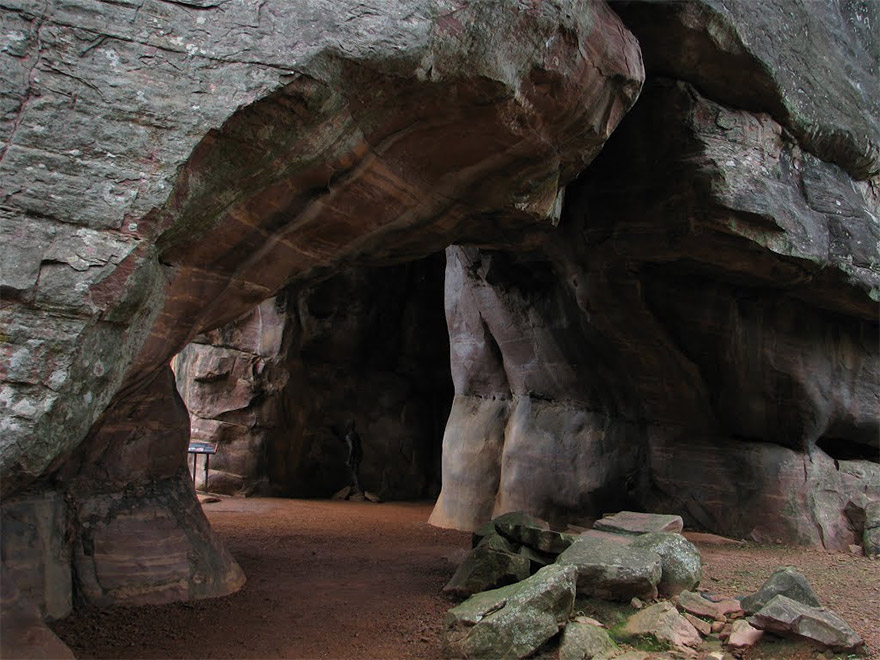 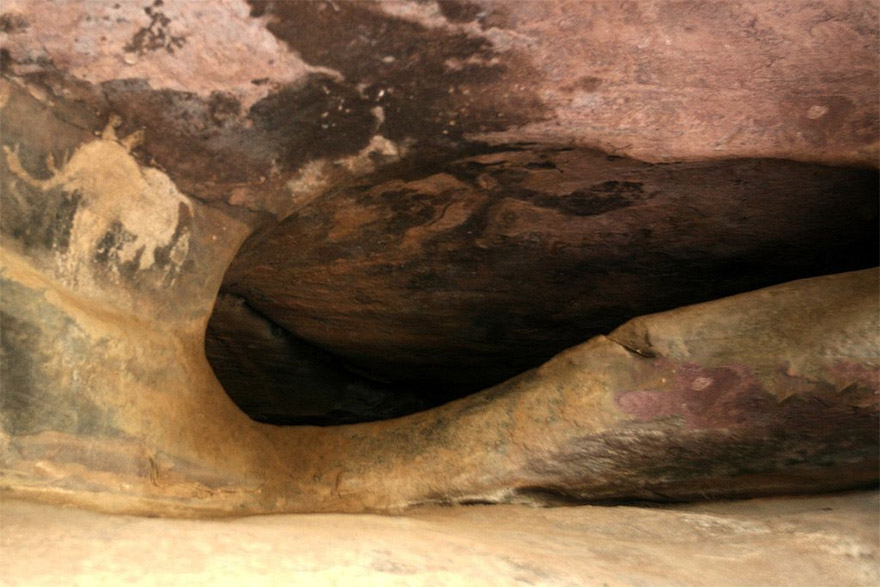 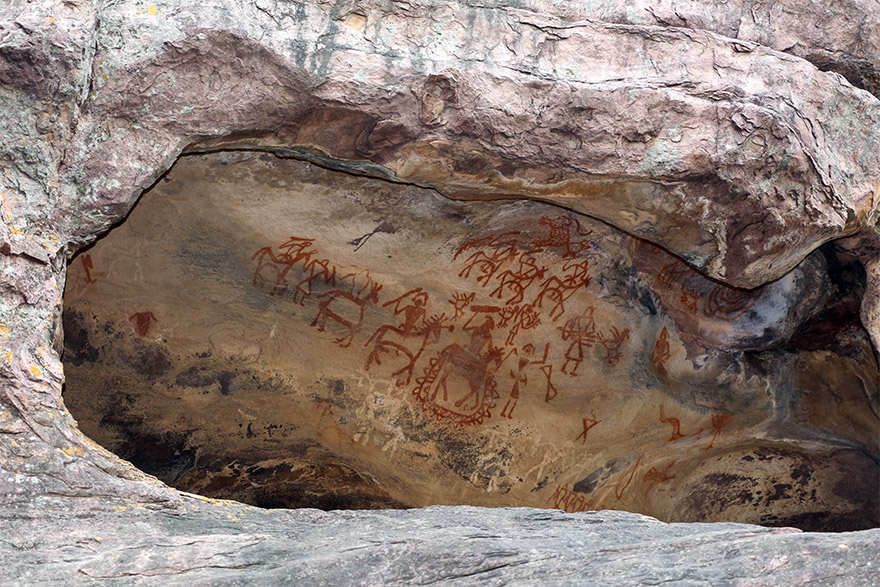 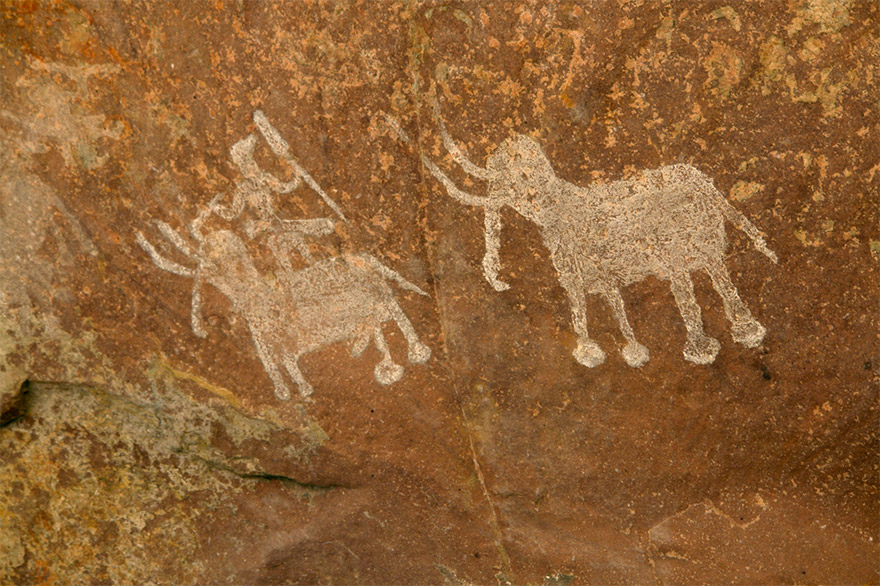 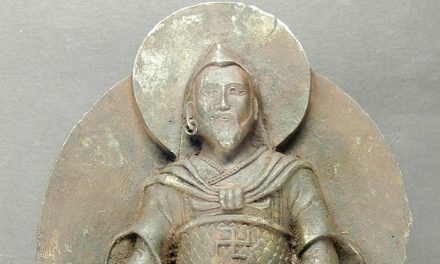 The Mysterious Iron Deity made from a Meteor 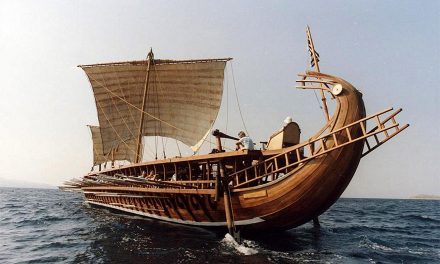