The Value of Offering Obeisances 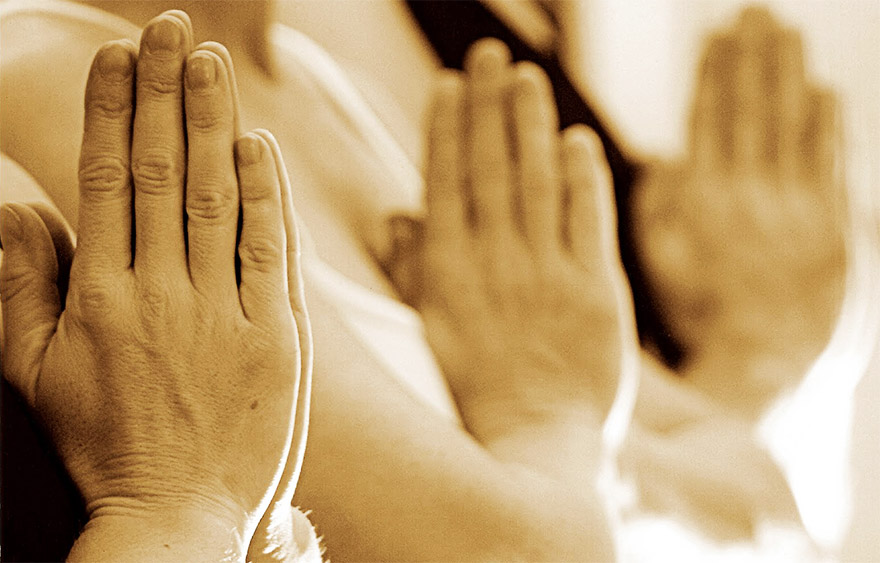 When my son went to India and met an elderly lady, he offered his obeisances and seeing this the lady started crying and blessed my son saying that nowadays none of the new generation children like the act of offering obeisances and said she was astonished seeing my son doing this even though brought up in a foreign country. The credit for teaching my son this should go to Srila Prabhupada and ISKCON, in which offering obeisances is an integral part of Vaishnava culture.

Offering obeisances to the Supreme Lord and to the devotees of the Lord is an important limb of Bhakti or devotional service. The first thing we are expected to do upon having darshan of the Lord or His pure devotees is to offer pranams. In our Vedic culture it has been a practise that whenever the younger ones in the family meet anyone elder than them, they immediately fall at their feet and offer their obeisances and seek the elders blessings. In Mahabharatha also we see that Krishna the Supreme Personality of Godhead follows this very nicely and whenever He meets Yudhishtira who is elder, the Lord gets up and offers respects. This culture is mostly forgotten now. Srimad Bhagavatam from the beginning to the end, glorifies the Lord by saying “namah namah” again and again. The first verse in Srimad Bhagavatam begins with “om namo bhagavate vasudevaya” and the last verse is 12.13.23

“I offer my respectful obeisances unto the Supreme Lord, Hari, the congregational chanting of whose holy names destroys all sinful reactions, and the offering of obeisances unto whom relieves all material suffering.”

We are unaware of the great value of this practice. Just by falling at the feet of the elders we attract the mercy and blessings of the elders and any misunderstanding or anger just melts away by this very act. In this regard there is a beautiful story of sage Markandeya in the Padma purana Srsti khanda chapter 33 and we shall see the same here.

This pastime of Markandeya is different from the one given in the Srimad Bhagavatam, as it is from a different kalpa. In the previous kalpa, there was a renowned sage by the name Mrikandu and a son was born to him. His name was Markandeya. That boy attained five years of age and developed exceedingly good qualities. Once, a sage full of knowledge saw the boy roaming around in the courtyard. The sage stood there for a long time and through his mystic vision came to know all about the future course of events that were to occur in the life of the boy. Seeing the sage, Mrikandu asked him, “What is the duration of life of my son? Kindly calculate the number of years remaining in his life, and whether they are less in quantity or great.” The sage said, “O Lord of the sages! The creator of this world [Brahma] has fixed the total remaining duration of life of your son to be six months. Please do not lament. I have told you the truth.” Mrikandu heard this and then performed the upanayana, sacred thread ceremony, of his son Mrikandu then said to his son, “Always offer obeisances to the sages.” The son, having heard this, took great pleasure in offering such obeisances.

Not caring for high or low caste, he paid respects to all humans. After five months and twenty-five days had passed, Markandeya saw a group of seven sages and offered his respects to them. Markandeya was wearing a mekhala, a belt-like girdle, and was carrying a staff. The sages said, “aayushmaan bhava,” “Live long!” However, after saying this, they noticed that the boy had only five days remaining in his life. Knowing this fact, the sages became frightened. They took the boy with them and went to see Lord Brahma. They paid their respects to Lord Brahma and introduced the boy. The boy offered obeisances to Lord Brahma. Lord Brahma said to the boy, “May you live long.” The sages heard these words and were visibly pleased. Lord Brahma saw the sages and was amazed. He said to the sages, “Who is this lad and why has he come here?” The sages then narrated everything as follows, “This is the son of Mrikandu. He is short-lived. We have brought him here so that you can kindly make him long-lived. Seeing that he was short lived, his father named Mrikandu performed the upanayana ceremony, tying the girdle around his waist and bestowing the staff. Mrikandu then advised him to pay respects to each and every saintly person he saw. O great grandsire! We were on a pilgrimage and happened to notice this lad paying respects to each and everyone. Thus we blessed him by saying, ‘Live long!’ How will the words spoken by us as well as yourself come true?” Thus addressed by them, Lord Brahma replied, “This is Satya-loka — the land where true words are spoken. This is the reason why it is fearless from all sides. This lad named Markandeya will now have a life-span equivalent to mine. This best among sages will be helpful to me and will be present along with me at the beginning as well as at the end of a kalpa.”

Thus we see the great value of offering obeisances and now under the blessings of Srila Prabhupada we should revive this wonderful culture and teach our younger generation the value of this.

Creation According to Hinduism

Art of Living is to Master the Art of Dying