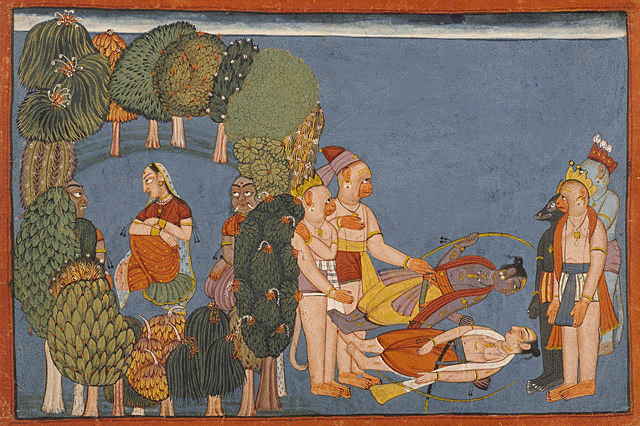 The Sundara Kanda, the fifth book in the Ramayana, focuses mainly on the adventures of Sri Hanuman, and the story is as follows: Hanuman meets Rama during the latter’s 14-year exile in the forest. With his brother Lakshmana, Rama is searching for his wife Sita, who had been abducted by Ravana. Their search brings them to the vicinity of the mountain Rishyamukha, where Sugriva, along with his followers and friends, are in hiding from his elder brother Vali, with whom he had quarrelled over a mistake.

Having seen Rama and Lakshmana, Sugriva sends Hanuman to ascertain their identities. Hanuman approaches the two brothers in the guise of a brahmin. His first words to them are such that Rama says to Lakshmana that none could speak the way the brahmin did unless he or she had mastered the Vedas. He notes that there is no defect in the brahmin’s countenance, eyes, forehead, brows, or any limb. He points out to Lakshmana that his accent is captivating, adding that even an enemy with sword drawn would be moved. He praises the disguised Hanuman further, saying that sure success awaited the king whose emissaries were as accomplished as he was.

When Rama introduces himself, Hanuman reveals his own identity and falls prostrate before Rama, who embraces him warmly. Thereafter, Hanuman’s life becomes interwoven with that of Rama. Hanuman then brings about a friendship and alliance between Rama and Sugriva; Rama helps Sugriva regain his honour and makes him king of Kishkindha. Sugriva and his vanaras, most notably Hanuman, help Rama defeat Ravana and reunite with Sita.

In their search for Sita, a group of Vanaras reaches the southern seashore. Upon encountering the vast ocean, every Vanara begins to lament his inability to jump across the water. Hanuman too is saddened at the possible failure of his mission, until the other Vanaras and the wise bear, Jambavantha, begin to extol his virtues. Hanuman then recollects his own powers, enlarges his body, and flies across the ocean. On his way, he encounters a mountain that rises from the sea, proclaims that it owed his father a debt, and asks him to rest a while before proceeding. Not wanting to waste any time, Hanuman thanks the mountain and carries on. He then encounters a sea-monster, Surasa, who challenges him to enter her mouth. When Hanuman outwits her, she admits that her challenge was merely a test of his courage. After killing Simhika, a rakshasa, he reaches Lanka.

Hanuman reaches Lanka and marvels at its beauty. He also regrets that it might be destroyed if Rama engages in battle with Ravana. After he finds Sita, sitting depressed in captivity in a garden, Hanuman reveals his identity to her, reassures her that Rama has been looking for her, and uplifts her spirits. He offers to carry her back to Rama; but she refuses his offer, saying it would be an insult to Rama, as his honour is at stake.

After meeting Sita, Hanuman begins to wreak havoc, gradually destroying the palaces and properties of Lanka. He kills many rakshasas, including Jambumalli and Akshaa. To subdue him, Ravana’s son Indrajit uses the Brahmastra. Though immune to the effects of this weapon, Hanuman, out of respect to Brahma, allows himself be bound.

Deciding to use the opportunity to meet Ravana, and to assess the strength of Ravana’s hordes, Hanuman allows the rakshasa warriors to parade him through the streets. He conveys Rama’s message of warning and demands the safe return of Sita. He also informs Ravana that Rama would be willing to forgive him if he returns Sita honourably. Enraged, Ravana orders Hanuman’s execution, whereupon Ravana’s brother Vibheeshana intervenes, pointing out that it is against the rules of engagement to kill a messenger.

Ravana then orders that Hanuman’s tail be lit afire. As Ravana’s forces attempted to wrap cloth around his tail, Hanuman begins to lengthen it. After frustrating them for a while, he allows it to burn, then escapes from his captors. With his tail on fire, he burns down large parts of Lanka. After extinguishing his flaming tail in the sea, he returns to Rama.

When Lakshmana is severely wounded by Indrajit during the war against Ravana, Hanuman is sent to fetch the Sanjivani, a powerful life-restoring herb from the Dronagiri mountain in the Himalayas, to revive him. Ravana realises that if Lakshmana dies, a distraught Rama might give up, and so he has his uncle Kalnaimi tempt Hanuman away with luxury. Hanuman is tipped off by a crocodile (actually a celestial being under a curse) and kills Kalnaimi. When he is unable to find the specific herb before nightfall, Hanuman takes the entire Dronagiri mountain to the battlefield in Lanka, thus helping others find the herb to revive Lakshmana. An emotional Rama hugs Hanuman, declaring him as dear to him as his own beloved brother Bharat.

In another incident during the war (which brought about Hanuman’s Panchamukha form), Rama and Lakshmana are captured by the rakshas, Mahiravana (and his brother Ahiravana), a powerful practitioner of the dark arts, who holds them captive in his palace in Patalpuri, or Patala (the nether world). Mahiravan keeps them as offerings to his deity. Searching for them, Hanuman reaches Patala, whose gates are guarded by a young creature called Makardhwaja (known also as Makar-Dhwaja or Magar Dhwaja), who is part reptile and part Vanara.

The story of Makardhwaja’s birth is said to be that when Hanuman had extinguished his burning tail in the ocean, a drop of his sweat had fallen into the waters and eventually become Makardhwaja, who perceives Hanuman as his father. When Hanuman introduces himself to Makardhwaja, the latter asks his blessings, but fights him to fulfill the task of guarding the gate. Hanuman defeats and imprisons him to gain entry.

Upon entering Patala, Hanuman discovers that to kill Mahiravana, he must simultaneously extinguish five lamps burning in different directions. Hanuman assumes the Panchamukha or five-faced form of Sri Varaha facing north, Sri Narasimha facing south, Sri Garuda facing west, Sri Hayagriva facing the sky and his own facing the east, and blows out the lamps. Hanuman then rescues Rama and Lakshmana. Afterwards, Rama asks Hanuman to crown Makardhwaja as King of Patalpuri.

When the war ends, Rama’s 14-year exile has almost elapsed. Rama then remembers Bharata’s vow to immolate himself if Rama does not return to rule Ayodhya immediately, on completion of the stipulated period. Realising that it would be a little later than the last day of the 14 years when he would reach Ayodhya, Rama is anxious to prevent Bharata from giving up his life. Hanuman therefore flies to Ayodhya to inform Bharata that Rama is on his way home.

Shortly after he is crowned Emperor upon his return to Ayodhya, Rama decides to ceremoniously reward all his well-wishers. At a grand ceremony in his court, all his friends and allies take turns being honoured at the throne. Hanuman approaches without desiring a reward. Seeing Hanuman come up to him, an emotionally overwhelmed Rama embraces him warmly, declaring that he could never adequately honour or repay Hanuman for the help and services he received from the noble Vanara. Sita, however, insists that Hanuman deserved honour more than anyone else, and asks him to seek a gift. Upon Hanuman’s request, Sita gives him a necklace of precious stones adorning her neck. When he receives it, Hanuman immediately takes it apart, and peers into each stone. Taken aback, many of those present demand to know why he is destroying the precious gift. Hanuman answers that he was looking into the stones to make sure that Rama and Sita are in them, because if they are not, the necklace is of no value to him. At this, a few mock Hanuman, saying his reverence and love for Rama and Sita could not possibly be as deep as he implies. In response, Hanuman tears his chest open, and everyone is stunned to see Rama and Sita literally in his heart.

When Hanuman asked Valmiki the cause of his sorrow, the sage said that his version, which he had created very laboriously, was no match for the splendour of Hanuman’s, and would therefore, go ignored. At this, Hanuman discarded his own version, which is called the Hanumad Ramayana.

Maharishi Valmiki was so taken aback that he said he would take another birth to sing the glory of Hanuman, which he had understated in his version. Later, one tablet is said to have floated ashore during the period of Mahakavi Kalidasa, and was hung at a public place to be deciphered by scholars. Kalidasa is said to have deciphered it and recognised that it was from the Hanumad Ramayana, recorded by Hanuman in an extinct script, and he considered himself very fortunate to see at least one pada of the stanza.

After the Ramayana War

After the war, and after reigning for several years, the time arrived for Rama to depart to his heavenly abode. Many of Rama’s entourage, including Sugriva, decided to depart with him. Hanuman, however, requested to remain on earth as long as Rama’s name was venerated by people. Sita accorded Hanuman that desire, and granted that his image would be installed at various public places, so he could listen to people chanting Rama’s name. 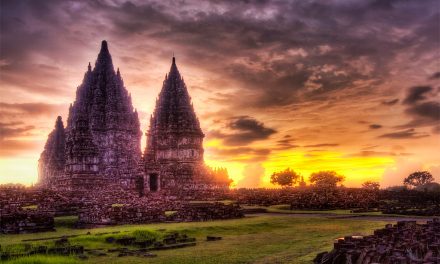