Namakkal: A City Around Mountains 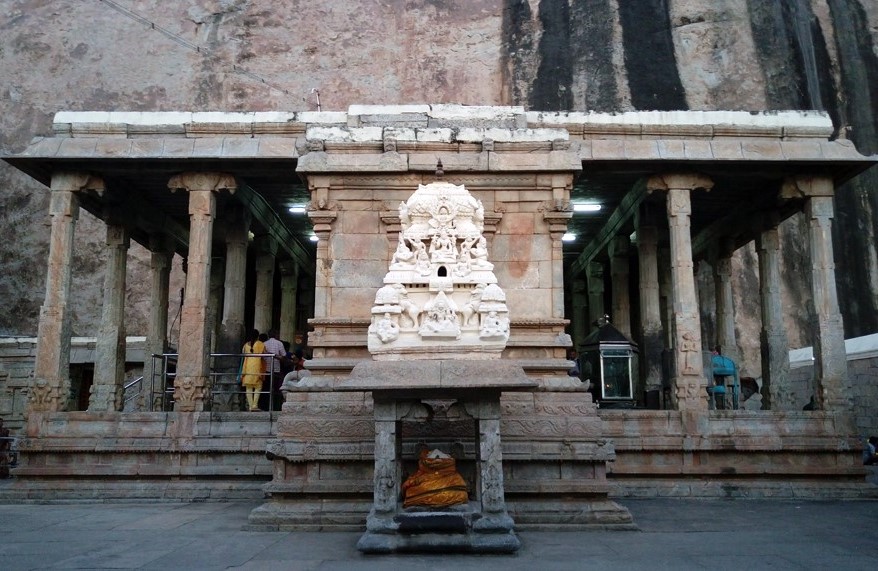 Namakkal is situated 52 kms south of Salem in the state of Tamil Nadu in India. It is surrounded by the Kollimallai Mountain Ranges and buzzes with devotees of Lord Narasimha and Bhakta Hanuman throughout the year.

As soon as one enters the city of Namakkal, one sees a beautiful mountain situated right in the heart of the city. This is the only mountain in this area and surprisingly unlike the other cities and towns in India; the whole city of Namakkal is built around this mountain.

It actually makes you think how this mountain is right in the center of the city. Who put it there? Or what was the need to build the city around the mountain? The answer for that is a pastime which occurred towards the end of Treta-yuga.

Lakshmi Devi Desires to Have Darshana of Narasimha Avatara

During the Satya-yuga when Bhakta Prahlada was being tortured by his father Hiranyakashipu, Lord Vishnu had to rush immediately to save him. In urgency, He did not take Lakshmi Devi and Garuda along with Him. Hence Lakshmi Devi missed to witness the pastimes of Lord Narasimha.

She approached Lord Vishnu to fulfill Her desire of darshana of Narasimha Avatara. Hearing the request of Lakshmi Devi, Lord Vishnu told Her to visit Kamalalaya lake in this area and perform penances on the bank of the sacred Lake. He instructed Her to chant the mantra “Om Namo Narayana” while performing the penances.

Towards the end of the Treta-yuga, Hanuman had brought Sanjeevani Mountain to Srilanka in order to save the life of Lakshmana, the younger brother of Lord Ramachandra. After Lakshamana had regained His consciousness and was cured, Hanuman placed the Sanjeevani Mountain back in the Himalayas from where He had uprooted it. On the way back, he went to Gandaki River to bathe in its sacred waters.

There he found a shaligrama shila which he carried along on his way to Srilanka. When Hanuman was flying over this area, it was the time of performing the sandhya-vandana (daily prayers). Hence he stopped here. He came to the bank of Kamalalaya Lake and started looking for someone to keep shaligrama shila as this sacred shila could not be placed on the ground. He then spotted Mother Lakshmi and approached Her with his request of holding the shila till he performed his daily prayers.

In the meantime, the shaligrama shila started growing until it became heavier for Mother Lakshmi to hold. Unable to bear the weight, She kept the shila down and it grew into a huge mountain. When Hanuman returned he was amazed and surprised to see the huge mountain which was not present there earlier. Mother Lakshmi then narrated him the entire incident. She asked Hanuman to lift the shila as it would not be a great task for him since he had lifted Sanjeevani Mountain. Hanuman unleashed his tail and surrounded the shila with it but could not move it an inch. No matter how much he tried, he could not move the shila.

Suddenly there was a bright light atop the mountain. It was the effulgence emanating from the transcendental body of Lord Narasimha who had appeared to give darshana to Lakshmi Devi and Hanuman, fulfilling their desires. Since Mother Lakshmi chanted the holy names of the Lord near this hill, He named this hill as Namagiri. ‘Nama’ means Lord’s holy name and ‘giri’ means the hill. Later this place came to be known as Namakkal. 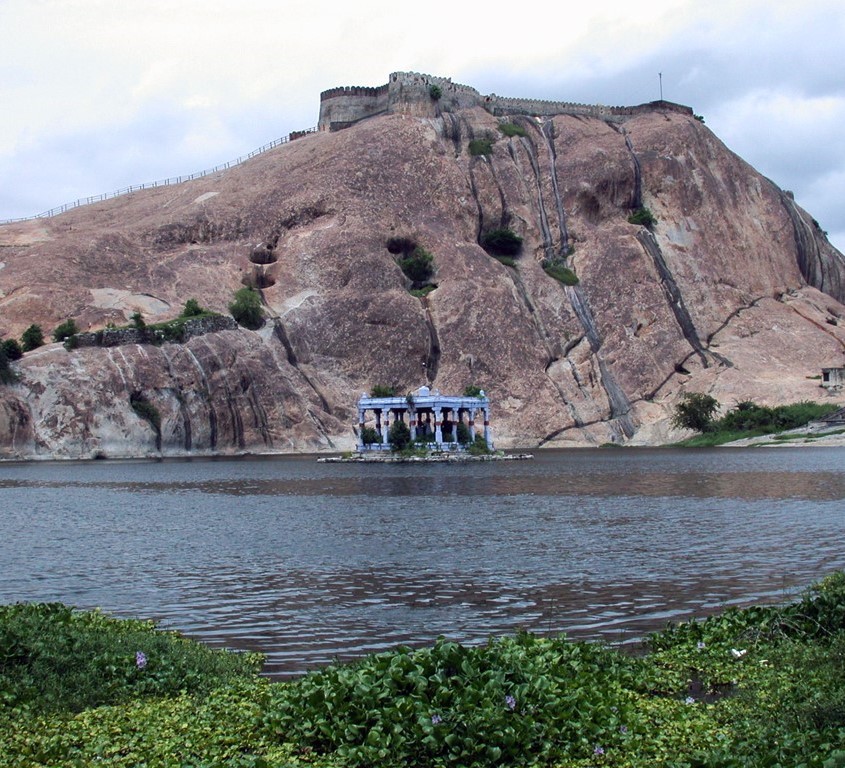 Lord Narasimha asked Hanuman to return to Srilanka, assist Lord Ramachandra in His pastimes and then return to worship Him at Namakkal and also receive the worship of devotees.

The Cave Temples at Namakkal

There are three main temples in Namakkal – Sri Lakshmi Narasimha Temple, Sri Ranganathar Temple and Sri Anjaneyar Temple. It is believed that these temples were originally built by the Aadhiyamans in the 7th century and were later improved by the Pallavas and Madurai Nayakas in 13th century. These temples are beautifully decorated with mantaps of intricately carved pillars. Atop Namagiri Mountain is the Namakkal fort.

Sri Lakshmi Narasimha Temple is right at the foot hill of Namagiri on its western side. The same temple complex houses three temples. In the center is the temple of Lord Narasimha, on its left is the temple of Namagiri Thayar and on the right is Sri Lakshmi Narayana temple. Thayar is facing east towards Lord Narasimha to have His darshana always. She is sitting on a lotus flower holding lotus in Her beautiful hands. It is believed that anyone who worships Namagiri Thayar becomes expert in Mathematics.

In the temple of Lord Narasimha, on the altar is Lord Narasimha sitting in Veerasana. His palm is stained with the blood of Hiranyakashipu. He has sharp nails which He used to kill Hiranyakashipu and He holds Sudarshana and Panchajanya in His upper two hands. He also has a danda to punish the sinful persons. Behind Him are Sanaka, Sanandana and the Sun-good and the Moon-god holding chamaras fanning the Lord. On the right side of Lord Narasimha is Lord Shiva and on His left side is Lord Brahma offering Him prayers.

Hence this place is also called as Trimurti Sthalam. In the altar, on the surrounding walls, one can also have darshana of Sri Vaikuntha Narayana, Sri Ugra Narasimha, Sri Varaha and Sri Vamana. Amusingly there is no gopura atop this temple since the Lord is in the cave and the gopura could not be constructed for such a huge shaligrama mountain.

It is a wonderful sight to remind us to keep our vision always at the lotus feet of the Lord. Sri Anjaneyar stands in open sky without roof above his head. This is because a roof cannot be constructed over Lord Narasimha, Bhakta Hanuman also doesn’t want a roof over him. Many kings have tried to construct the roof above Anjaneyar but they have failed. 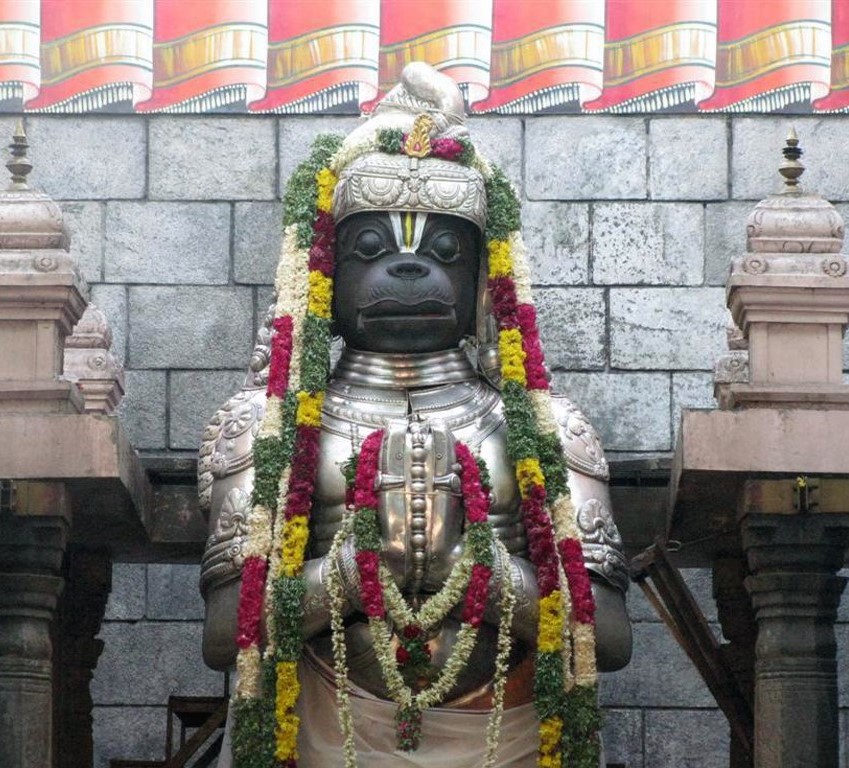 Bhakta Hanuman served Lord Ramachandra in various capacities like a servant, like a politician, like a soldier, etc. Hence Hanuman here is holding a japa mala in his hands and a sword is tied to his waist. He is also dressed royally with a crown and kavacha on his body. Sri Anjaneyar is the protector of Namakkal Dham. If one performs the vada mala seva to Sri Hanuman, one is relieved of the ill effects of Shani and Rahu planets.

Right behind Sri Lakshmi Narasimha temple is Sri Ranganatha Temple on the other side of Namagiri. A flight of hundred stairs has to be climbed to access the temple. Lord Ranganatha is lying in the Karkodaya Shayana posture. He is resting on Karkodaka Snake. Karkodaka was a king of snakes. He performed penances in order to please Lord to rest on his coils and hence the Lord blessed him with his desire. The face of the snake is like a fierce roaring lion. Lord Ranganatha is holding the chakra, conch, bow, arrow, mace and a sword.

Namakkal is well connected by Railways from major cities in South India like Bengaluru, Chennai, Hyderabad, etc. The nearest bigger railway station is Salem. One can also reach Salem and then catch a bus to Namakkal. The nearest airport is Salem. There are pretty good accommodation facilities in Namakkal.

Benefits of Mauna Vratha According to Hinduism