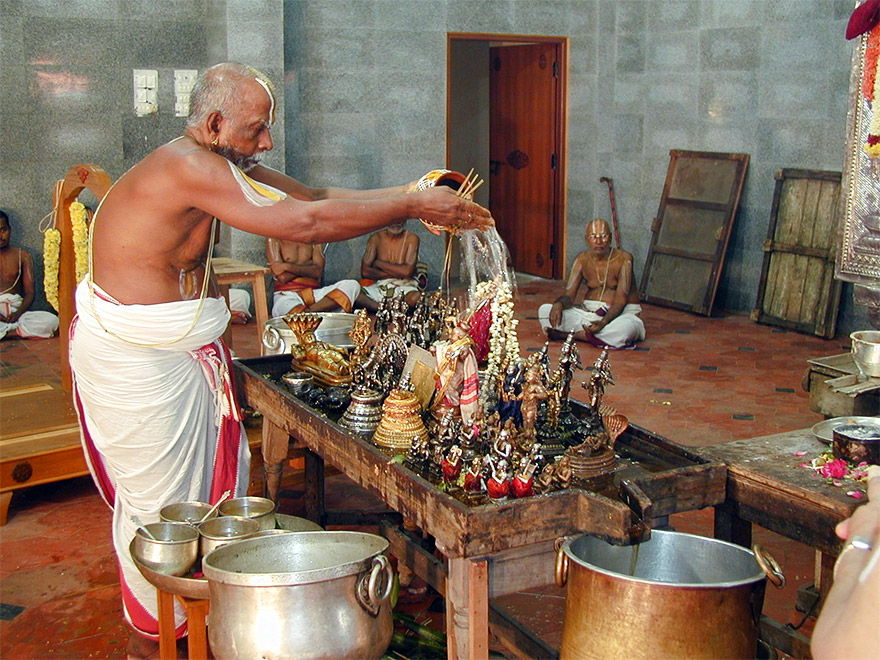 The following article by G.S. Radhakrishna highlights the fact that the central government will begin taxing all temples in the country on things such as pujas, archanas, prasadam, etc. Though the article focuses on the famous Tirupati temple we should remember that 99.99% of temples in the country are not rich. The majority are small village temples that struggle to get by. In most cases there isn’t even enough money to hire proper pujaris and archakas to maintain the service of the temples. Despite the difficulty the temples face, the government feels the need to tax the temple’s and make it even harder for them to be maintained. Oddly we find no reference to taxing of churches and mosques. The government has always targeted Hindu places of worship for taxation and take over, but never churches or mosques.

A whopping Rs 50-100 crore Goods and Service Tax (GST) burden stares at the Tirumala Tirupati Devasthanams (TTD) which manages the world’s richest temple of Lord Venkateswara at Tirumala. This is thanks to the flagship tax reform regime of the Modi government – GST – that rolls out from 1 July.

The ancient Vaishnavite shrine has all along been exempted from sales tax, wealth tax and income tax besides VAT by the Centre and state governments in the past and the current mandatory slapping of GST on temples is annoying a lot of people. “The ruling BJP and NDA spent thousands of crores on cleaning river Ganga and building Ram temple at Ayodhya but is slapping such a huge burden on Hindu devotees,” said C Rangarajan, president of Telangana Archaka Samakhya, an association of priests.

There are 3,000 temples in Telangana and Andhra Pradesh, of which over 70 percent will come under the tax net of Rs 20 lakhs annual revenue. So far, most temples enjoyed exemption from VAT, by the respective state governments. This power has been withdrawn thanks to the GST regime and made it mandatory for these temples to be taxed. There has been a wave of protests and outbursts from pious and devout Hindus in the recent past over this.

According to unofficial sources, the pilgrimage and temple visits by the devout throughout the year brought additional revenue of 12 percent in the form of spending on transport and hospitality industry to the state exchequer.

The temple of Lord Venkateswara at Tirumala managed by the TTD will be worst hit. It has a footfall of almost one lakh devotees per day and a Hundi collection of Rs 2-3 crore daily. GST will now onwards be slapped on rest-houses and services including arjita sevas and special darshan tickets.

In April this year, the TTD declared that it earned Rs 1,038 crore through cash offerings from devotees in 2016-17. During the last financial year, over 2.68 crore devotees visited the shrine and a total of 10.46 crore laddus were sold. The TTD has approved a Rs 2,858 crore annual budget for 2017-18 without any allocation towards tax payments. “We spend most of our receipts from sale of laddu prasadam, rest houses, tonsuring and others for welfare of devotees and also on our educational, medical services and on Sanatana Hindu Dharma Pracharam,” said Executive Officer, Ashok Singhal defending the demand for waiver of GST for Tirumala. 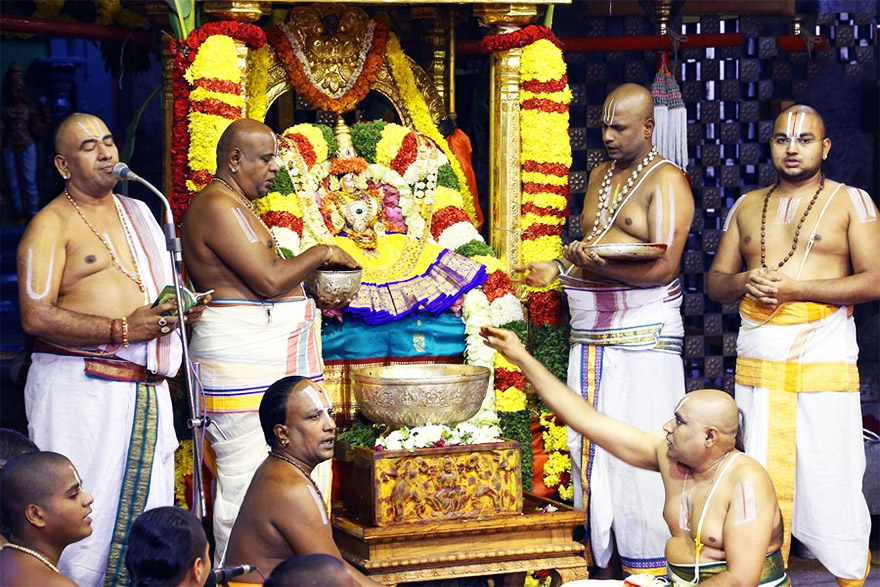 However, GST has been exempted on prasadams (what temples offered as takeaway) following representations from Andhra Pradesh and Uttar Pradesh governments, which is a major saving grace for TTD. Obviously the revenue from sale of famous laddu prasadam of Tirumala would be exempted from GST but the TTD will pay GST on all raw materials it purchases for preparation of the laddus.

Earlier this year TTD Joint Executive Officer KS Srinivasa Raju, in his representation for GST exemption said TTD provided free meals to tens of thousands of devotees every day under its Nitya Annadanam scheme and leases out its cottages and rest houses to the devout at nominal rent on day-to-day basis. “If GST is slapped on the annadanam and also accommodation, it will be a huge burden on the devotees. Till date the TTD has not paid any sales tax and it has no dealer registration either,” he told the Centre.

Unlike exemptions granted by the state and Centre in the VAT, GST on all goods and services is made mandatory even for charitable and religious institutions. Union Finance Minister Arun Jaitley has declared its imposition as non-negotiable. He also reiterated in a series of discussions with state representatives including ministers, officials and MPs from the Telugu-speaking states, that unlike in the case of VAT, state governments have no say in implementation of GST and that they have no powers to exempt GST in their jurisdiction.

“The Centre has made GST collection mandatory even on temple revenues – sale of services like sevas, prasadam and accommodation. Our appeal that the TTD should be exempted from GST has been rejected by the Union Minister,” said Andhra Pradesh Finance Minister Yanamala Ramakrishnudu who raised the first protest at last month’s meeting on GST at Delhi.

He has written to Arun Jaitley to consider reducing the GST rates on 10 goods and services including agarbattis (incense sticks) and cashewnuts. Ironically, the Andhra Pradesh Endowment Minister Manikyala Rao, a BJP nominee in the Chandrababu Naidu government is silent on the issue. But VHP, RSS and other Archaka forums in AP are up in arms and blame the Centre for ignorance of temple administration. “Probably NDA government is unaware of the fact that the majority of temples in south are managed by the endowment department and not private trusts as it is in North India,” said A Atreya Babu, president of the Andhra Pradesh Archaka Samakhya.

The situation is the same in Telangana where Bhadrachalam – the land of Lord Rama’s stay in Dandakaranya – is a main temple attraction. The Yadadri temple town near Hyderabad is now promoted by Telangana Chief Minister K Chandrasekhar Rao on par with Tirumala and very recently ticket system, queues and cottages were organised. “The GST on temples is unjustified and a conspiracy of the Centre to rob the state’s resources,” said Telangana Endowment Minister A Indrakaran Reddy.

Reddy said temples were a state subject and the state government subsidised maintenance of popular temples under the Dhoopa-Deepam program for conduction of rituals. He plans to take up a protest against the Centre as GST on temples hindered the development of temples in the state. “The government should not stand between God and devotees,” he told FirstPost contending that taxing services in temples was a violation of freedom of religious expression.

Dr C Rangarajan, custodian of the temple of Lord Venkateswara at Chilkur on the outskirts of Hyderabad, popular as ‘Visa temple’, questions as to why the custodians of Hindu religion and temples like peethadhipathis and trustees of religious institutions were not consulted before imposing GST on temple revenues. “We should take the protest campaign on social media as well and involve the Members of Parliament (MPs) from south India,” he said.

TTD had challenged the provisions of the Finance Act, 1994 in February 2014 in the Supreme Court stating that service tax is violation of Constitution Articles 26 (freedom to manage religious affairs), 27 (freedom as to payment of taxes for promotion of any particular religion), and 14 (right to equality).

TTD had earlier challenged the imposition of service tax on the accommodation service provided by it, but the Andhra Pradesh High Court dismissed the writ petition in 2012. Later the TTD had changed the title of guest houses into ‘rest houses’ and escaped payment of service tax. The TTD operated nearly 7,000 rooms including 5000 at Tirumala.

In the case of laddu prasadam VAT, the court had approached Customs, Excise and Service Tax Appellate Tribunal (CESTAT) which held that the prasadam is the blessings of a deity which has a great religious significance and hence it cannot be made eligible for taxation.

The mandarins at TTD are already worked up over rising costs and deficit accounting in spite of increasing revenues from sale of tonsured hair and other accounts. While the TTD spent a whopping Rs 350 crore towards procurement of ingredients for preparing the famous laddu, the income earned by way of its sales is a paltry Rs 165 crore. They are worried that the drain of Rs 185 crore on the exchequer is likely to widen during the ensuing financial year with no let-up in the soaring prices of essentials and now the GST.

Slashing of interest rates from 5.5 percent to 4.25 percent by the Reserve Bank of India (RBI) on fixed deposits of Rs 10 crore and above during November 2016 severely impacted the prospects of the income of the TTD, which has staggering deposits worth about Rs 10,500 crore with various nationalised banks. Its gold accounts have also nosedived with the recent gold policy of the Modi government and TTD was more or less pressurised to deposit its gold (daily 2 kgs of gold collected in its hundis) in the scheme.

Pilgrims now anticipate a minimum 20-30 percent hike in the cost of their trips. Endowment officials say that the pilgrim rush to other religious centers at Vijayawada, Simhachalam and Srisailam in Andhra Pradesh and Bhadrachalam and Yadadri would go down drastically with the GST regime. “For Andhra Pradesh and Telangana, religious tourism is a major revenue earner and the GST will foil it. 80 percent of Andhra Pradesh’s tourist revenue is from Tirupati only and such GST on temple revenues will have cascading impact on temple tourism,” said Venkatachari, a retired Endownent Department official of Andhra Pradesh.

Stages and Varieties of Faith