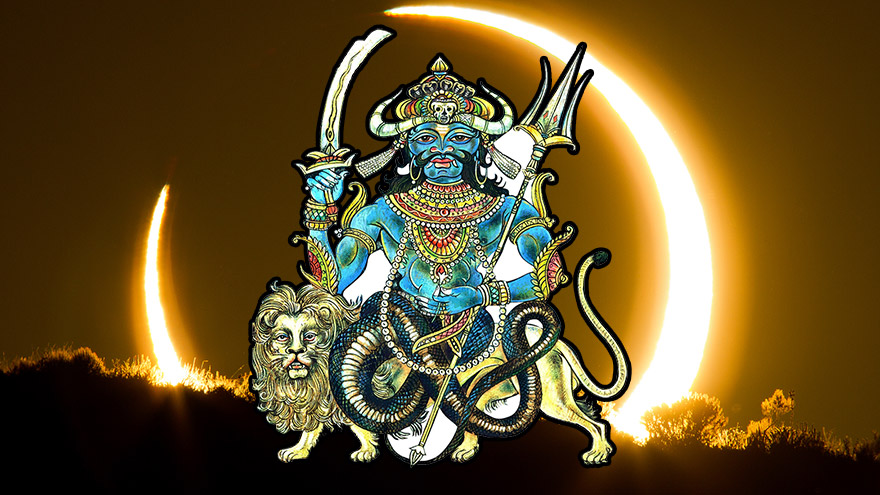 Below are the Charts of 2 eclipses, 224 years apart. The first chart marks the beginning of the Reign of Terror that began during the French Revolution, when idealogue Robespierre assumed power. The second is the chart of the August 8 Eclipse in the United States. 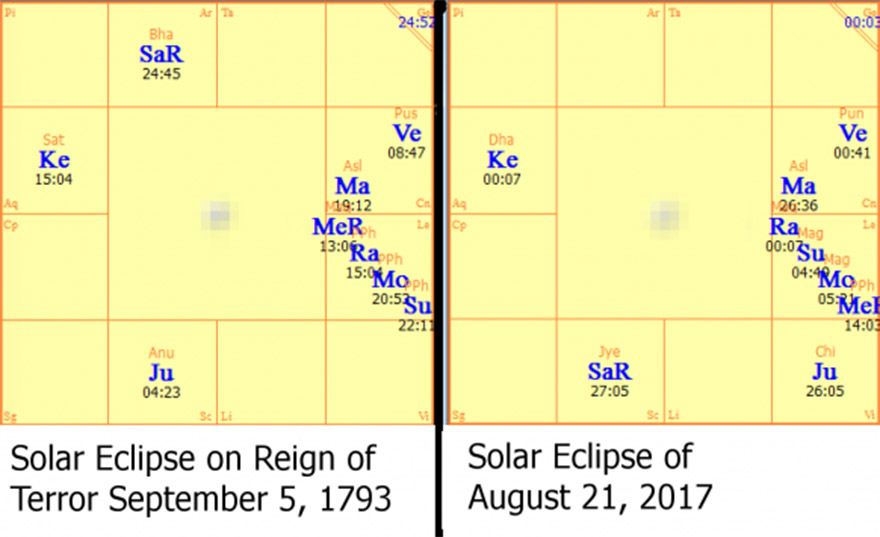 In both dates we see 7 of the nine visible planets in the exact same signs, an occurrence so rare as to boggle the mind. Also, in each example, the shadow of the eclipse path passes within a few hundred miles of each nation’s capitol.

Rahu, sun, moon and retrograde Mercury in Leo. These are both days of the solar eclipse. Eclipse is also very tight, with an orb between four and 7°. This eclipse in Leo shows a counterfeit version of power, which usually trends toward tyranny and domination.

The common “Mercury retrograde” connection refers to backward thinking, miscommunication, flawed analyses and the lack of discrimination in support of this despotism and violence.

Additionally, we see Mars and Venus, both in cancer. The debilitated Mars shows a lack of discipline and moral integrity (9th house ruler, from Leo). Venus, which shows diplomacy and tolerance is highly compromised by this weakened Mars.

Additionally, prominent/important planets in Scorpio, a sign of paranoia, are ominous – Especially given the aforementioned debilitated Mars. When the ruler is weakened, the lower quality of the sign emerges. Meaning, Scorpio at best is a sign of emotional courage and resolve. When Mars is weakened however, it trends toward paranoia and emotional reaction.

The Eclipse Path of the September 5, 1793 eclipse 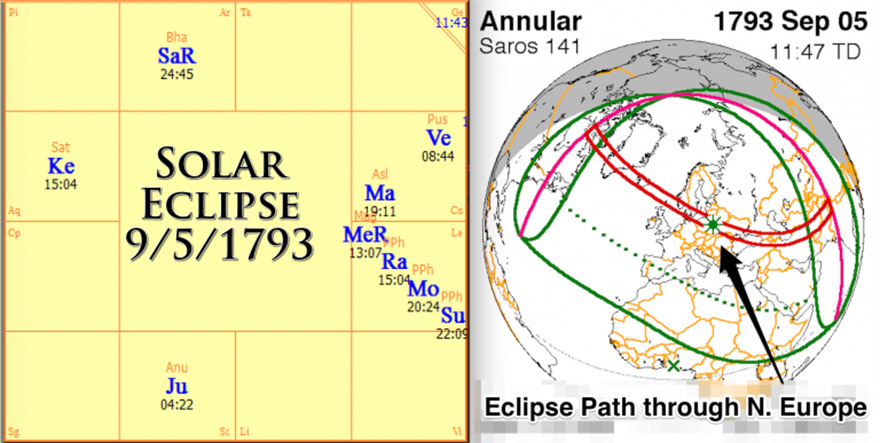 As you can see in this chart, the path of the eclipse passed within a few hundred miles of Paris, the city in question.

As you can see, the upcoming solar eclipse in August 2017 will pass within a few hundred miles of the US capital, Washington DC.

It’s clear to see the connection between the chart of the current president and the 2 eclipse charts. He has a 6° Leo ascendant, with Mars at 3°. The sun will be eclipsed at approximately 5° on August 21, which is right on his ascendant and Mars.

Do you remember the story of Rahu and Ketu? Rahu had his head chopped off after being deceived. Rahu is a planet of confusion, deception and trickery. In fact, I discovered the connection to the reign of terror, and the solar eclipse, after a prominent decapitation occurred several years ago on a solar eclipse. This led me to investigate the most notorious rain of decapitations in history, the reign of terror in France. Much to my surprise I learned it both began and ended the days of the solar eclipses.

Leo Is the sign of the King. The sun being eclipsed by Rahu shows the obsessives and confused expression of power which led to the bloodbath in France more than 200 years ago. This same confused power struggle is looming ominously before us now.

We are not 18th Century France, reacting to an entrenched monarchy system. We are a democracy, with many checks and balances in place to hedge against a literal “Reign of Terror”. But we definitely have a potential for harsh, authoritarian power plays and there are provisions in our bylaws that account for things like “Martial Law”, especially if it is to restore “Public Safety”.

We have already seen, not only attempts to silence dissenters (Media, Intel, Justice), but the removal of scientific data and information from official government websites, the installation of Cabinet members hostile to the Agencies they are meant to protect / citizens they are meant to serve, etc. Given the level of mobilized resistance already to these efforts by the current admin, there is no reason to think it will not get worse before it gets better. In the name of “Public Safety” we may see some attempts to over reach – using national guard – for example, or outlawing protests (especially if they get violent which may be coming).

Given the level of mobilized resistance already to these efforts by the current admin, there is no reason to think it will not get worse before it gets better. In the name of “Public Safety” we may see some attempts to over reach – using national guard – for example, or outlawing protests (especially if they get violent which may be coming).

It is my hope that the revolution is against the current regime, that in fact they represent the worn-out aristocracy that began to shift, culturally at least, with Barack Obama. Recognition of mutli-versity and inclusion from the Obama years led to the backlash against it we are seeing – as it was corrupted by the same flawed system of paybacks, elitism and moneyed interests. Those years were seen as a certain Tyrrany by some. Whereas others see this current regime as the real tyrrany.

I am voting for inclusion and openness.

Following the French Revolution (if you set aside Napoleon’s conquest) France settled into a democratic system. There revolution had to be as harsh (in the reverse) as the system / oppression it was replacing in order to find balance. 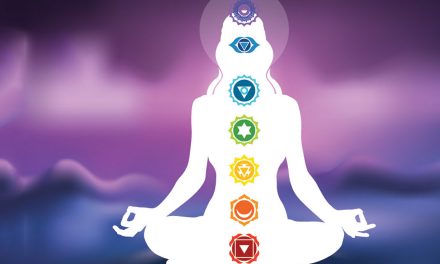 The Nakshatras’ Relationship to the Sushumna Chakras