Kumbha Mela derives its name from the immortal “Pot of Nectar” described in ancient Vedic scriptures known as the Puranas. Kumbha in Sanskrit language means “pot or pitcher’. Mela means “festival”. Thus Kumbha Mela literally means festival of the pot. Or in this case a festival celebrating the appearance of the pot of nectar.

For the task of churning the milk ocean, the Mandara Mountain was used as the churning rod, and Vasuki, the king of serpents, became the rope for churning. As the churning began, the Mandara Mountain began to sink deep into the ocean, at which time Vishnu incarnated as a great tortoise and supported the mountain on His back. With the demigods at Vasuki’s tail and the demons at his head, they churned the milk ocean for one thousand years.

The churning of the milk ocean first produced a deadly poison which Shiva drank without being affected. As Shiva drank the poison, a few drops fell from his hands and were licked up by scorpions, snakes, and similar other deadly crea.tures. After Shiva drank the poison, numerous opulent items were produced. First a surabhi cow appeared, who could yield unlimited quantities of milk. A white horse named Uccaihsrava was then produced, as well as a white elephant named Airavata. Then a valuable gem called the Kaustubha-mani appeared

Next came the apsaras, beautiful dancing girls, and a host of other wonderful things appeared from the milk ocean. At last a male person named Dhanvantari appeared carrying the pot of immortal nectar in His hands. Seeing Dhanvantari with the pot of nectar, both the demigods and demons became anxious. The demigods, being fearful of what would happen if the demons drank their share of the nectar of immortality, forcibly seized the pot.

Wherever the demigods went with the pot of nectar, fierce fighting ensued. In an endeavor to keep the nectar from falling into the hands of the demons, the demigods hid it in four places on the earth, Prayag (Allahabad), Hardwar, Ujjain, and Nasik. At each of the hiding places, a drop of immortal nectar spilled from the pot and landed on the earth. These four places are since believed to have acquired mystical power. 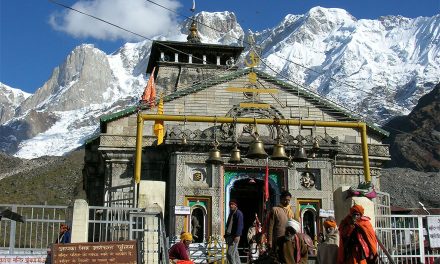