A Boat Ride to No Return 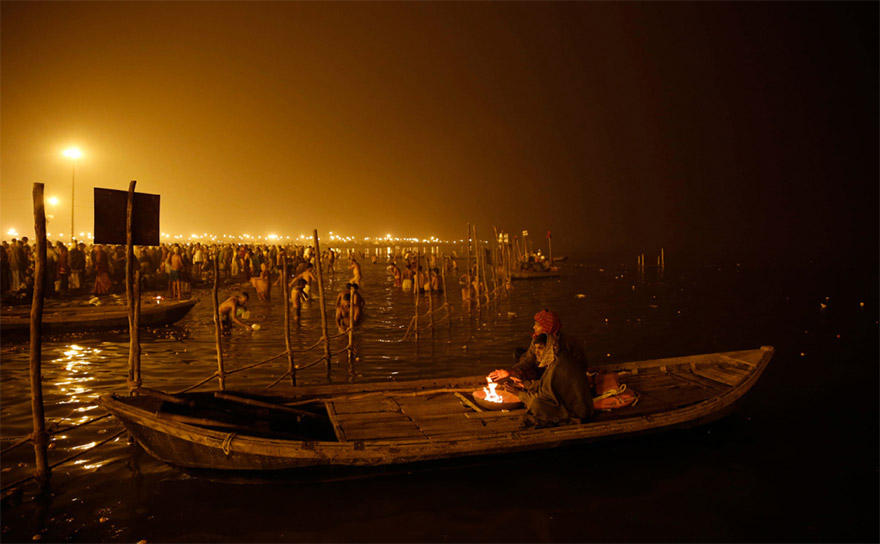 My trip to India was very much like my desire to learn TM. It was initiated by my inner guide. I wasn’t thinking of going anywhere. I was enjoying the quietness of a week long retreat in a TM academy in Suffolk. In the middle of one of his brilliant explanations about Maharishi’s knowledge – Alistair, our teacher – added an aside saying he was taking a group to the Kumbha Mela the next February.

Whilst he returned to his explanation, I received a strong inner prompt for me to go. There was no sound this time but its meaning was absolutely clear. I immediately signed up for it afterwards.

During my time in the TM movement I had read quite a lot about both Maharishi and the time he spent with his guru Swami Brahmanand Saraswati. The latter often said “I feel sorry about anybody who hasn’t got an ishta devata.”

I hadn’t a clue about what this meant until I went to the Allahabad Kumbha Mela in 2001. It is held there every twelve years because Allahabad is the sangam – the confluence of the three holy rivers – the Ganges, Yamuna and the Saraswati. It is believed that it is here that Lord Brahma performed the fire sacrifice that began this particular cycle of creation.

On my first boat trip down the Ganges – I was overcome with emotion – crying, laughing, while chanting spontaneously in Sanskrit without a clue of what was pouring forth from my lips – nor for that matter – what was going on in my pocket! 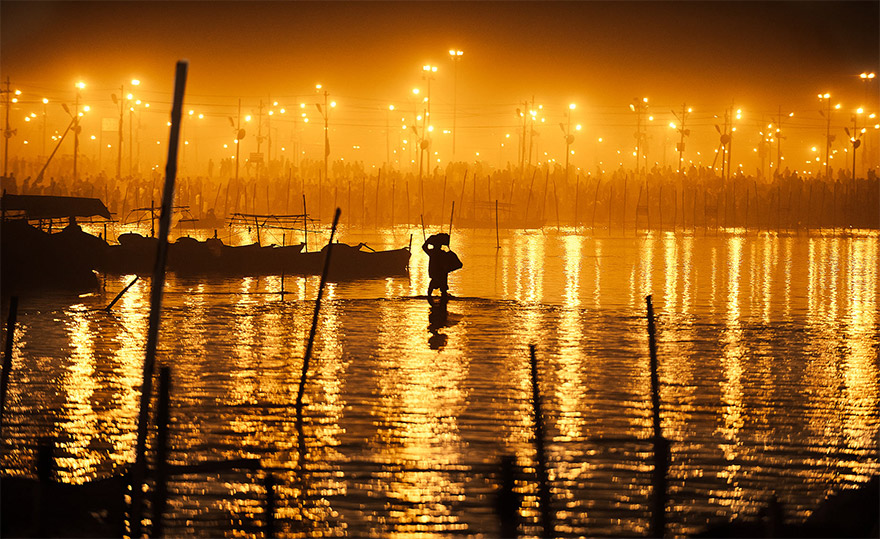 Later that morning, I was sitting in the hotel lounge writing my diary, when my room-mate arrived and introduced himself to me. He was anxious to relieve himself of his luggage and have a shower after a long car journey. He asked for the key to our room. Without looking, I felt in my pocket and gave it him. His eyes opened wide in surprise!

He was staring at a badly mutilated, exfoliated key-ring – minus the key. I apologised and gave him the key. He went to the desk, held up the offending object and asked for another. Even our knowledgeable guide was unable to explain this strange phenomenon – but he said that it must have been a strong burst of spiritual energy that had caused it to happen.

He was right! The very next day was a pivotal day in my life, which I will never forget. We visited the famous Hanuman Temple. The central and most ornate part of the temple was dedicated to Lord Hanuman – the monkey god. I was still hovering around the Ram and Sita altar to the left, when Alistair gestured the rest of the group to the other end of the temple. On the right of the central Hanuman altar there was one that I didn’t recognise. Our guide was already explaining about the image to the rest of the group when I went over to join them.

The moment I saw it I was overwhelmed by love and bliss. I prostrated myself before her and was once again chanting fluently in Sanskrit, even though I had no conscious knowledge of what I was saying. 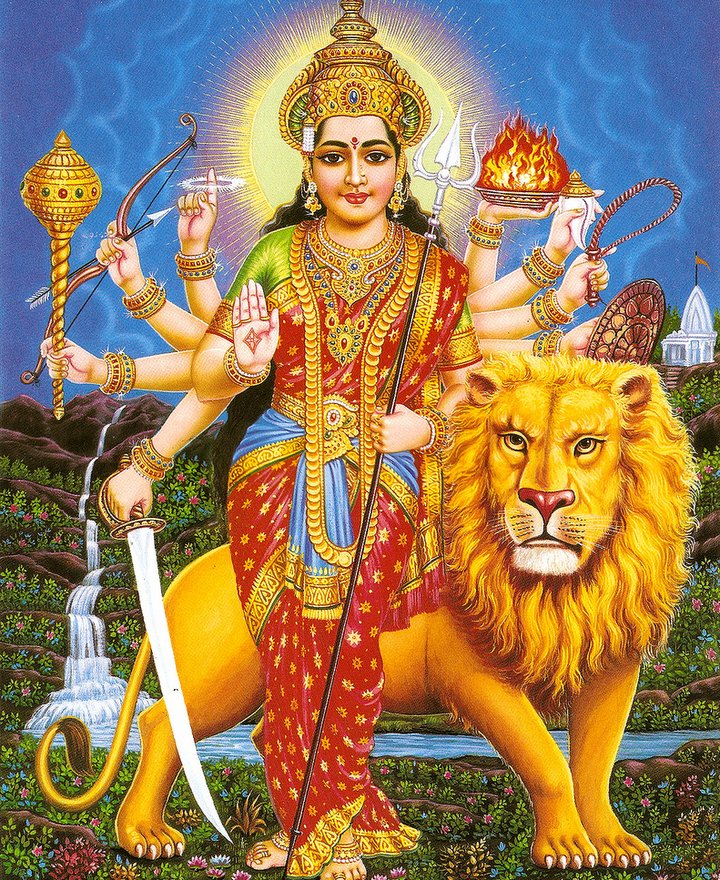 I prostrated myself before her many times. It was as though something deep inside knew exactly how I should behave – I was like some kind of doll or puppet in the hands of a hidden controller.

Strangely enough, I hadn’t even heard of Durga until afterwards. My link with her has not only continued but grown stronger with the passing of time.

She is the organising power in the cosmos. She occupies the junction point between the unchanging Absolute and the ever changing relative creation. Thus she is both unmanifest and manifest.

Her eight arms indicate that she is present everywhere in each of the eight points of the compass. Her hands symbolise her actions: In her top two hands she holds the conch that initiates creation; and the discus that maintains its immaculate precision.

The next two represent the flame of every form of life in the universe, whilst the points of the trishula represent the three spheres of creation, maintenance and dissolution.

The drum represents all the different time functions from the smallest cycle of time to the very longest – whilst the opposite hand is raised to take away fears and give blessings.

Finally her sword shows that she is in control of all diversity, whilst the mace is her symbol of sovereignty.

Her vehicle is the king of the jungle, who represents all our animal traits tamed to perfection. Once they are tamed, we can become one of her vehicles. 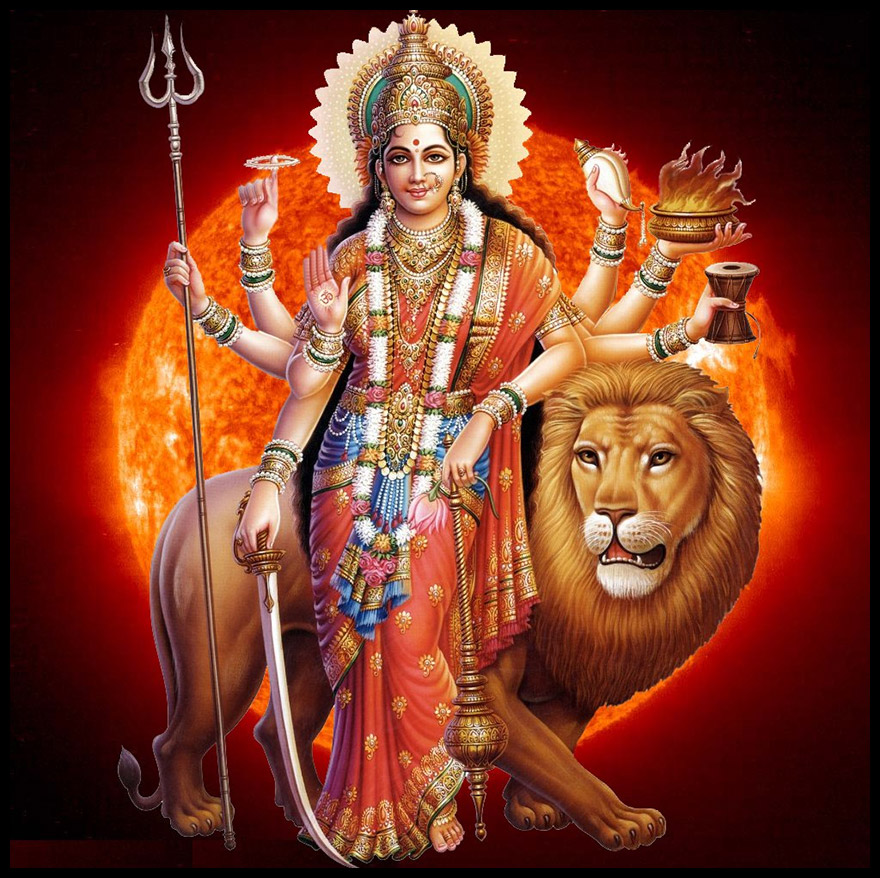 Recently, she told me that the two incidents on the boat pointed to the same conclusion. She said laughing and crying at the same time showed that I had unified the two most extreme emotions in relative existence; and the exfoliated key-ring was a sign that I had broken free from the cycle of birth, death and rebirth. The key freed from the key-ring, showed that from that instant I was now a free man.

However, it was the day Durga came to me that made all the difference. Maharishi calls cosmic consciousness the full development of the mind. He said whilst one can prefer one devata to another, it is usually on the level of the self – in other words – this kind of preference is based on the needs of individual.

He went on to say that true devotion is not possible until one achieves cosmic consciousness because then all of one’s thoughts and desires are centred upon pleasing the object of your love rather that what he or she could do for you.

My first sight of an image of Durga was immediately electrifying and life-changing. It is rather like falling in love as a peak experience, which always deepens and never fades. 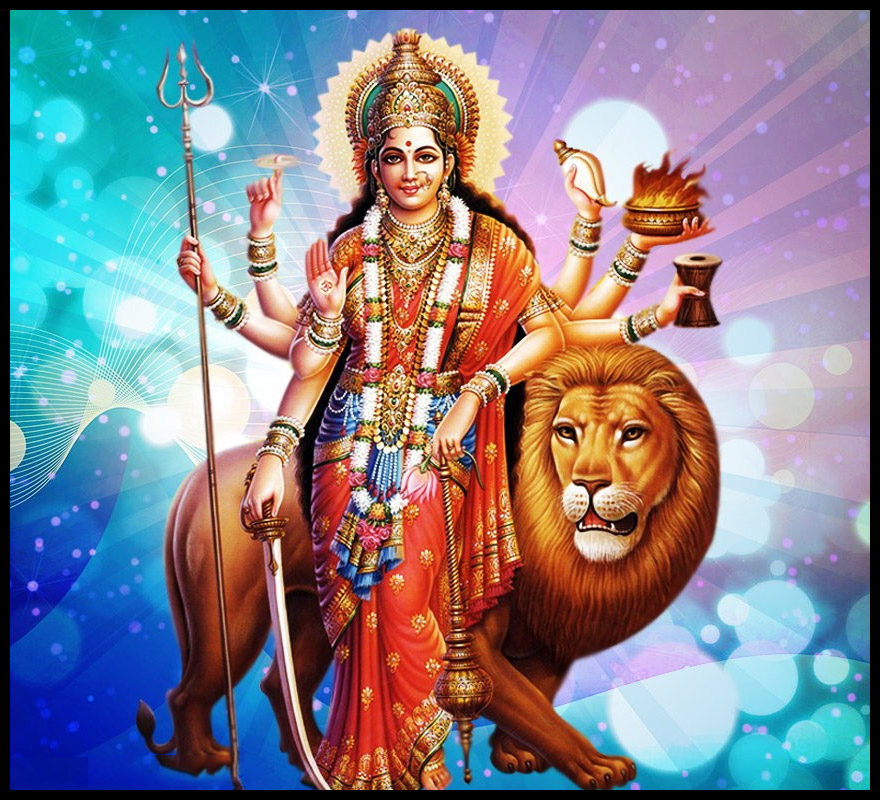 The question arises: how can an image have such a profound effect upon an individual? The science of Yoga tells us that the human body is a miniature replica of the cosmos and is part of a two way interdependence – which can become total. What we each experience is our own level of wakefulness! Our spiritual practises are our path to full wakefulness.

In addition, it is possible for skilled pundits to infuse something of the life and feeling into an image of a particular devata by chanting the correct hymns. It seems that I was sufficiently awake for my inner microscopic Durga to become one with an exterior representation of her as an image or even the cosmic queen herself.

I know this sounds very Indian but she has had many names down through the ages: Isis to ancient Egyptians, Athene to the ancient Greeks and the Virgin Mary of Revelations. 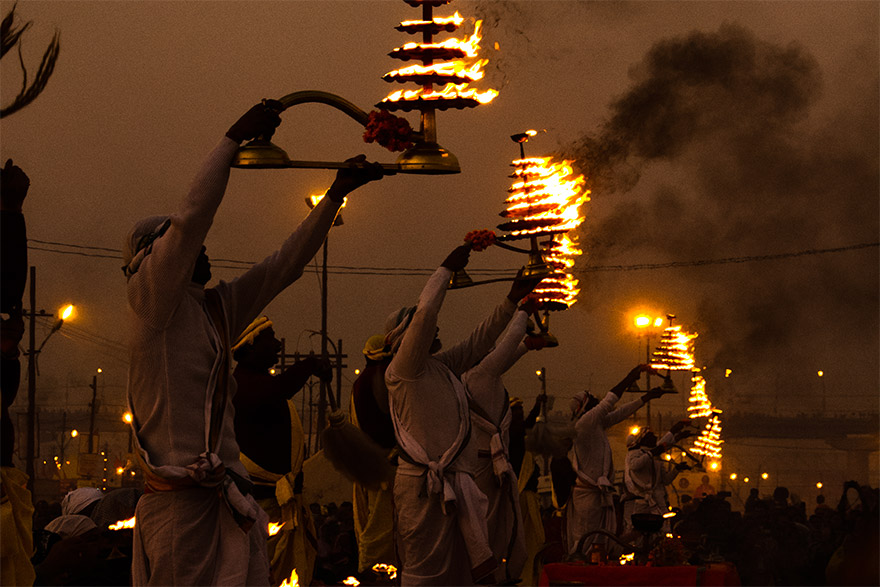 I am not sure about the mechanics of how such an experience works but I do know that some temple images are instilled with life by skilled pundits. Also, Maharishi has told us that the human body is a microcosm of the universe, complete with small versions of all the gods. The TM and TM Sidhi programmes he brought to the West are obviously devised to wake us up sufficiently to establish a proper line of communication with the gods who administer the external universe. The power of the image was enormous and was obviously more than adequate to do the job.

I was completely happy worshipping this image of the goddess. It was completely one pointed and I was oblivious to anybody watching. It was the kind of experience that one would want to last forever. In actual fact it must have lasted about an hour. The rest of the party had already left, when the sound of Jai Guru Dev – the voice of the guru inside – told me when it was time to leave.

Many years ago I had a profound experience of being at one with everything, which was short lived and never returned. I left the temple wondering if this would be the same.

Fortunately it wasn’t. Maharishi had given me the gift of the devatas and it continues to develop. Over the last fourteen years, Durga has been my mother, my lover and my mentor. There is no aspect of life with which she doesn’t help me. From deep within she initiates miraculous cures without medicine, gives blessings in many languages but to an eye witness all that can be seen or heard is yours truly. 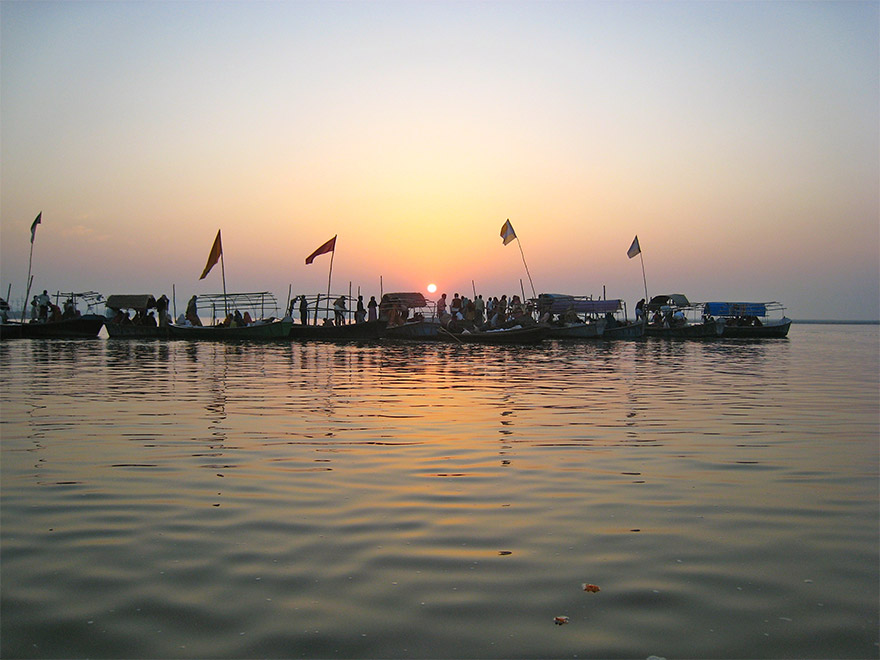 Before this happened I thought if any contact with a celestial being was possible at all it would be purely on worship – certainly not on the mundane level of ordinary life. How wrong I was – she is with me at every level of my life. She even drives my car or at least initiates a change of direction. I may be all keyed up to signal to turn right but I find my hand flicking the indicator in the other direction. She also finds me parking spaces when none seem available.

Guru Dev’s view of the ishta devata is beautifully illustrated by how the goddess managed to get ‘A Trip Beyond Imagination’ published. I honestly thought no publisher would believe it. However, nothing is beyond her. She made it easy by making the Kindle publishing page appear miraculously on my computer screen. She also managed to hold up publication to make a couple of additions.

Finally, it wasn’t until I started writing this that she informed me that the incidents in the boat and with the key were both signifying the same thing. She said laughing and crying simultaneously shows that you have gone beyond the two extreme opposite emotions in relative life by unifying them in the turiya state. Similarly the key ring incident was a sign that I had completed my round of karma in this lifetime. The thick, exfoliated steel of the key-ring symbolised the broken circle of birth, death and rebirth and the key – no longer imprisoned by the cycle of karma – the sign of permanent release.