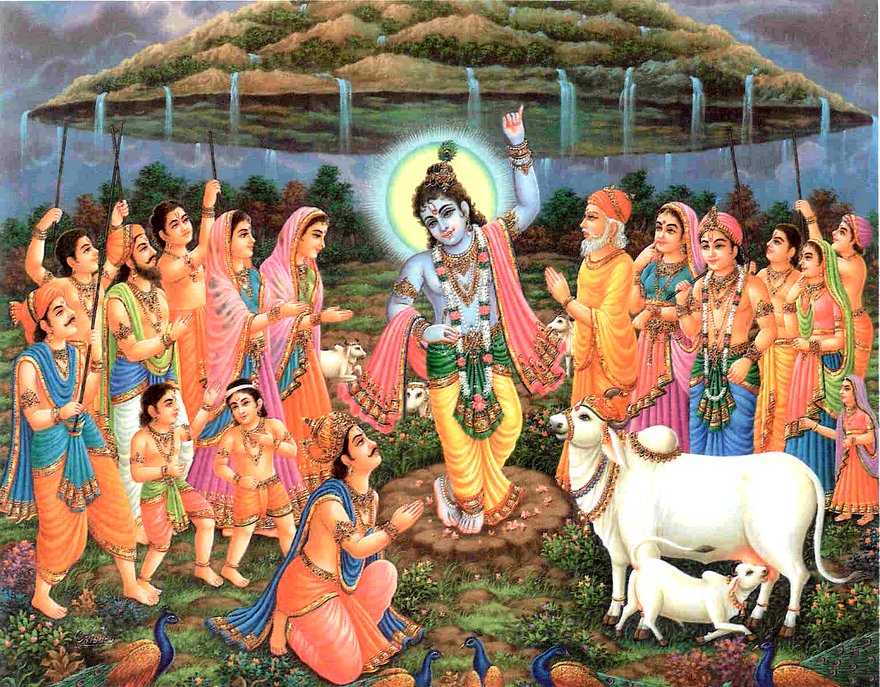 The Govardhan hill, more widely known as Giriraj ji in Vraja mandala, is considered as the topmost pilgrimage among the Krishna Bhaktas.

As he is a form of Shri Krishna himself, his mighty and beautiful cliffs symbolising the Shaligrama Shila are adored by every habitant and pilgrim of Vraja. The holy mountains of Givardhan have been praised in numerous scriptures as he has housed most of the pastimes of Krishna along with his friends.

From the ancient vedas to the recent literatures like the Bhaktama,l the glories of Govardhana have been vividly described. He has been a centre of attraction within the vicinities of devotional poetry and music. The saints of the Vallabh sampradaya have vastly sung of Govardhana since he is the ultimate resort of worship in sakhya rasa. He resides in Vraja bhumi to give pleasure to the devotees of Shri Hari, and is highly admired as his worship was initiated by the young Balagopala himself when he terminated the Indra Yagya.

During the very first worship of Govardhana in vraja, circumambulation of the divine hills was completed as a necessary ritual. Along with Shri Krishna, all the residents of vraja completed these rituals. Till today, all devotees continue to circumumbulate Giriraj ji. According to sthala puranas, this ritual never stops.

There are always a number of people offering worship to Govardhan ji every minute, be it day or night. Shri Govardhan ji encompasses abundant sacred spots on his pathway. All of them are directly related to the pastimes of Shri Krishna.

This article focuses on the various pilgrimage places that are situated alongside the circumambulation pathway of Shri Giriraj. In every practical sense, it is not possible to numerate and describe all these places in detail. Therefore, we shall emphasise on the major spots and highlight them in order. A landscape figure of the hills with the alongside pathway can be shown as follows:

The parikrama starts at Dana Ghati.

The enthusiastic and energetic parikrama begins at this point. According to the saints and sthala puranas, in ancient times, there was a compact passage in between the rocks of Shri Govardhan, which allowed only one person to pass at a time. The gopikas used to pass through this route while they went to sell their curds, buttermilk and butter. 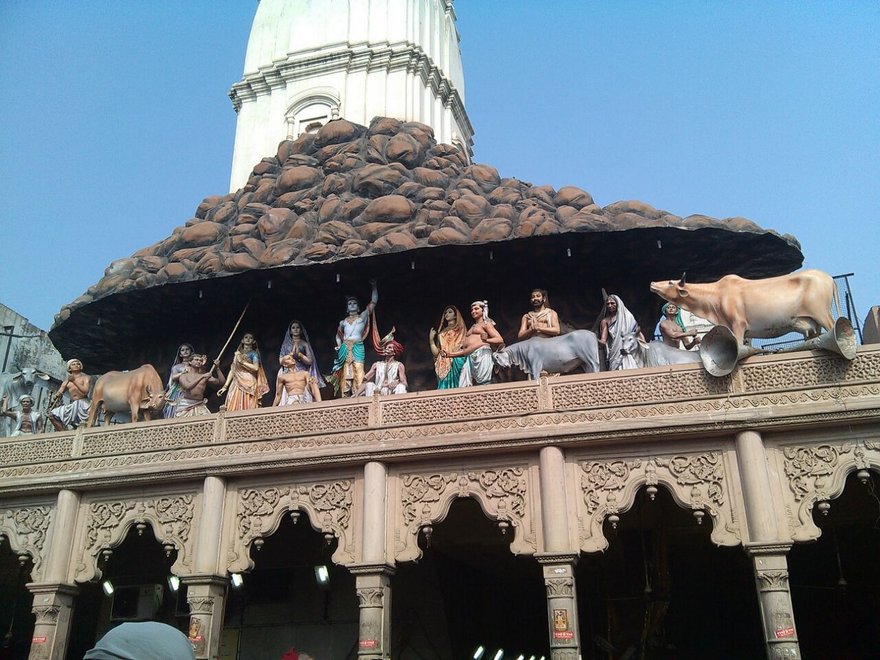 The mischievous troupe of Krishna and Balarama used to block this extremely narrow channel and ask the gopikas for a tax amount before they could pass. Tax was demanded in the form of the delicacies that the young damsels carried with them. In memory of this leela, this place came to be known as dana (tax) ghati.

Manasi Ganga is a pond lies right in between the mountains and is just next to Dana Ghati. When the dwellers of vraja went for the very first offerings to Shri Govardhan, they began their prayers with the ceremonial abhisheka which involved bathing the deity with holy waters. The river Yamuna was considerably far away from the location of worship and Giriraj is significantly large in size. 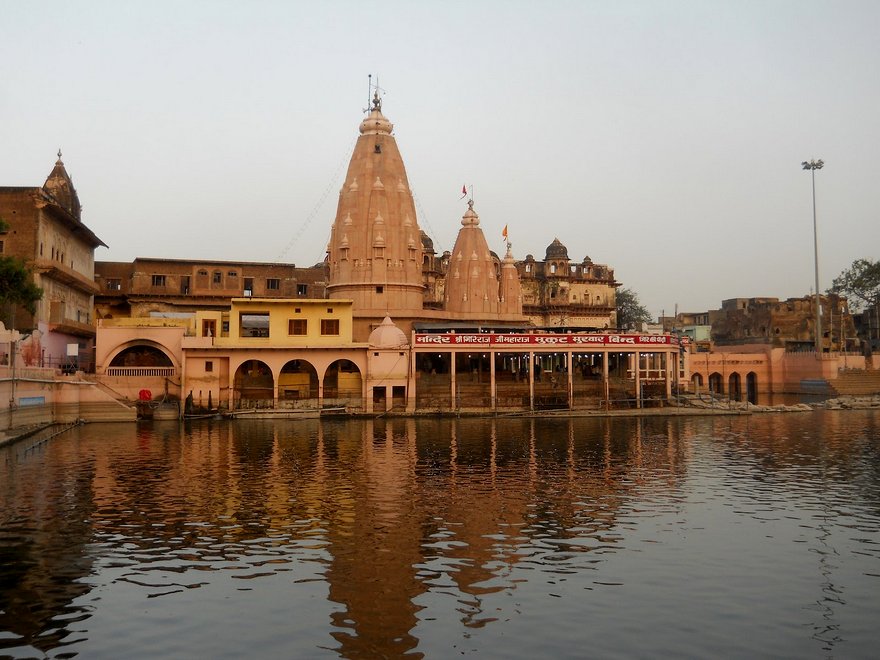 With both these coincidences, the vrajavasis eventually tired off trying to bathe Govardhan. With lost stamina, they requested Krishna to help them. Heeding to their request, the Lord lovingly summoned Ganga devi and invited her to appear on Shri Govardhana. She manifested herself in the form of a lake which came to be known as Manasi (emerging from mind) Ganga because she appeared on the call of Shri Krishna from his mind.

Govind Kund is a pond located on the outskirts of the Anyor village. After the worship of Govardhan hill, an angered Indra ordered his fierce clouds to flood the entire territory of vraja and destroy it. When the rains became out of control, Krishna held up Giri Govardhan on the little finger of his left hand which served as an umbrella and protected the people. This continued for the next seven days and after this, Indra recognised his mistake and came to ask for forgiveness from the Lord.

The divine cow Surabhi also joined his prayers and together they named Shri Krishna Govind meaning the Lord of cows. Indra’s majestic elephant Airavata, brought the waters of the heavenly rivers in his trunk and offered it to the Lord at this place as he was christened Govind. Hence this lake is known as Govind Kund.

The residents of vraja say that Giri Govardhan is in the shape of a peacock and the final point of his tail is poochhari (as the name itself suggests). Legend has it that one of the friends of Krishna became extremely emotional when he left for Mathura. The Lord promised him that he will return back and meet him at poochhari. Adhering to these words, the loving Sakha came and waited patiently at poochhari. 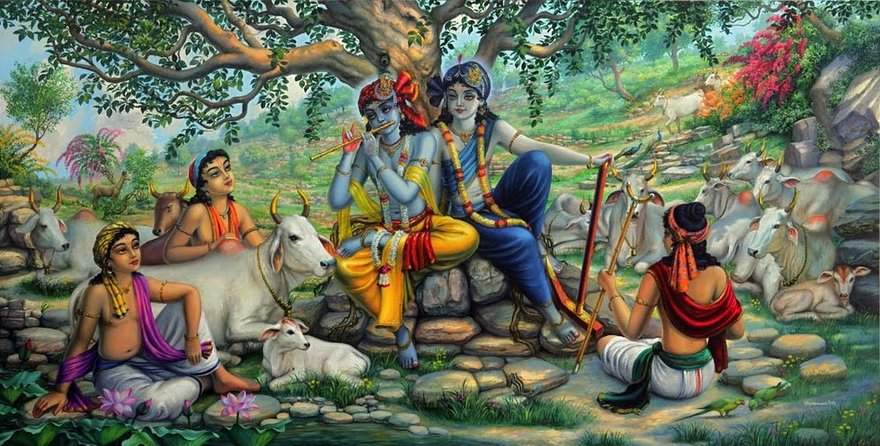 Many devotees come to offer their respects at this place which is famous as poochhari ka lauthha which literally means ‘the returning at poochhari’. The well-known Apsara Kund is located in the Poochhari village. It is mentioned in the scriptures that the heavenly damsels, apsaras, came and offered worship to the Shri Radha Krishna at this lake.

This village was initially named jeetpura meaning the city of victory, in memory of the Lord’s swift victory over Indra. As time passed, colloquial language caused the name to be reformed to jatipura. A prominent deity of Giriraj ji is worshipped here and is known as mukharvind. Some devotees say that Krishna lifted up the hill from this point.

Offering of milk is a regular and common practice at this place. The parikrama is divided into two parts. After crossing the jatipura village, the first part is completed. The second part begins here.

When Lord Krishna was residing out of Vrindavana, he often wandered back to the groves, gardens, lanes and villages of his cherished abode through his thoughts. He would sometimes lament as he dearly missed all the love that he got from the vraja vasis. At one such occasion, Krishna shared his grief with Udhhava, a cousin to the Lord who was a bit elder in age and had a relationship of a friend with him. 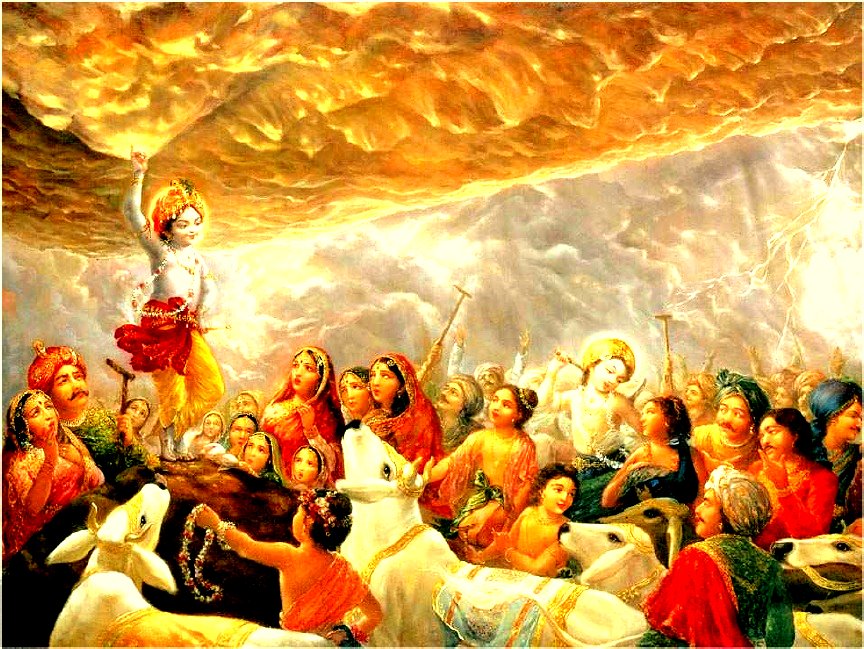 Upon the request of Krishna, Udhhava travelled to vraja. Conversing with the relatives and dear ones at Vrindavana, slowly Udhhava himself became indulged in the love of Krishna. Overwhelmed with this love, he rambled in the orchards of vraja bhumi, requesting the Lord to give him residence in the land of vraja. He prayed to him saying that he cherished to become a plantation in vraja, so that the dust of the holy feet of those who loved Krishna would always reach him. Shri Udhhava is still present at udhhava kund in the form of creepers and plants.

It is said that when Lord Krishna departed to his divine abode, his wives heard of his pastimes from Shri Udhhava in the form of Shrimad Bhagavatam at Udhhava Kund.

These two lakes are considered to be the eyes of Shri Giriraj when he is described to be in the shape of a peacock. Once, a demon named Arishtasura came in the form of bull to Vrindavana and was killed by Lord Krishna. Mockingly the gopis taunted him saying that he has committed an abominable sin by killing a male cow.

Such a sin can only be resolved by bathing in all the holy rivers. Abiding to their words, the Lord dug out a large hole in the earth and invoked the presence of all the holy rivers like Ganga, Yamuna, Kaveri, Godavari, Narmada, Saraswati, Bheema and Krishnaa. All the rivers poured in their sanctified waters and formed a pond which was entitled Shyama Kund. Observing this deed, all the Gopis lead by Shri Radha also dug out a large hole with the help of their jewellery and filled it in with the waters of shyama kund.

This lake was named Radha Kund. Both these ponds are very dear to the divine couple and they spent a lot of their loving pastimes inside and on the banks of these lakes.

This is one of the final landmarks in the parikrama. A pond of serene beauty and peace, Kusum Sarovara is simple an enchanting scene. It has housed the pastimes of Shri Radha Krishna when they enjoyed with flowers. And hence its name kusum (flower) sarovara (lake). 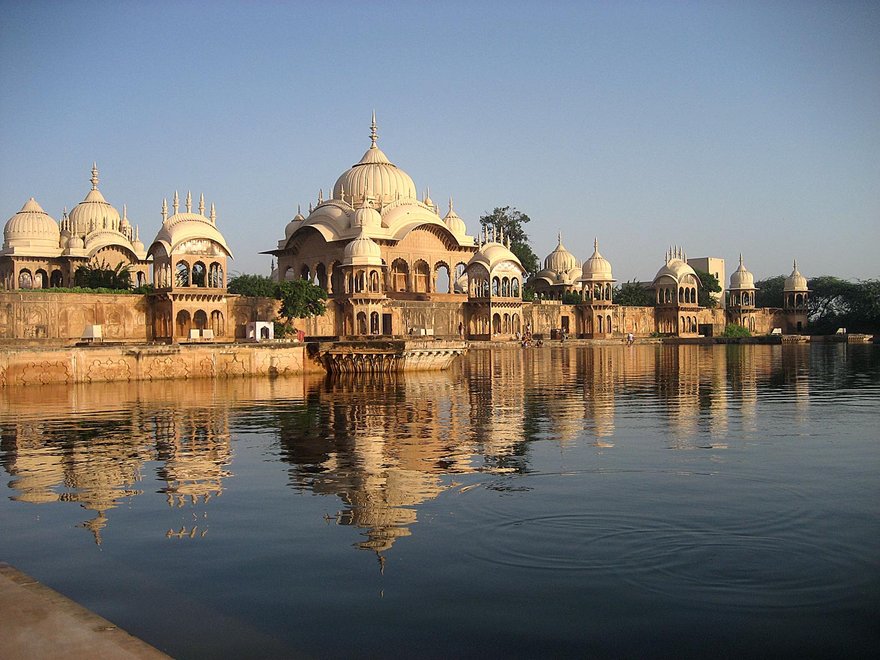 From Kusum Sarovara, the pilgrims move back to Dana ghati in completion of the circumambulation. Shri Giriraj is full of holy spots and sacred points. Each and every smallest stone on him is a witness to the Lord’s most intimate pastime. He is himself non-different from the Lord.

Even the citizens of the heavenly planets thrive to come and stay under his shelter. He is the protector of vraja, the worshipable deity of our own Gopala and the abode of ultimate love of the supreme.

7 Most Sacred Rivers of India