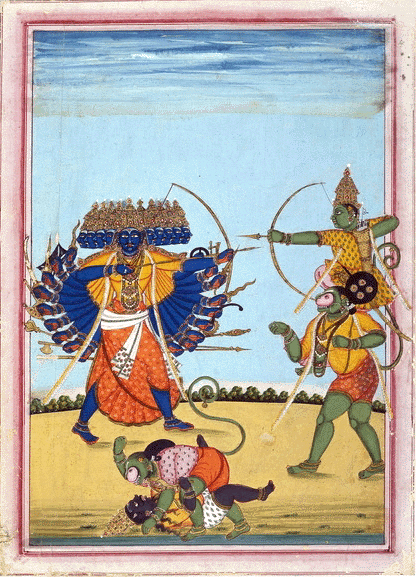 Ramavataram, popularly referred to as Kamba Ramayanam is a Tamil epic written by the poet Kamban during the 12th century. Based on Valmiki’s Ramayana, the original epic Ramayana in Sanskrit, the story describes the life of King Rama of Ayodhya. However, Ramavatharam is different from the Sanksrit original in many aspects – both in spiritual concepts and in the specifics of the story line.

Kamban wrote his epic under the patronage of Thiruvennai Nallur Sadayappa Vallal, a local chieftain. As a mark of respect for his patron, Kamban mentions his name once in every 1,000 verses.

The Ramavataram is quite well known, both in the Tamil literary world and throughout India, where it is appreciated for the color of the poems and for the religious sentiment.

The book is divided into six chapters, called Kandam:

The Kandams are further divided into 123 sections, called Padalam. These 123 sections contain approximately 12,000 verses of the epic.

As with many historic compilations, it is very difficult to discard the interpolations and addendum which have been added over a period of time to the original manuscript. This task was taken up a committee of scholars, collectively known as the Kamban Kazhagam (Kamban Academy), headed by Prof. T P Meenakshi Sundaram. The compilation published by this committee in 1976 is what is used as the standard today.

Kamban’s use of Virutham (tempo) and Santham (tune) in various verses is effective in bringing out the human emotion and mood setting for storytelling. He achieves the Virutham and Santham by effective choice of words.

To date, this epic is read by many Hindus during prayers. In some households the entire epic is read once during the Tamil Month of Aadi. It is also read in Hindu temples and other religious associations.

This epic is considered to be living proof that the worship of Lord Rama started in Tamil Nadu. On many occasions, Kambar talks about surrendering to Rama, who is a manifestation of Vishnu Himself.

It is interesting to note that the late E.V. Ramaswamy Periyar, the leader of the iconoclast DK party, called Kamban a ‘Tamil thurohi’ (traitor). The DK has always maintained that Rama was not worshipped by Tamils, but this book appears to prove otherwise.

The Sundara Kandam chapter is considered quite auspicious and is the most popular. It talks about the hardships faced by the main characters in the epic, their practice of restraint, and hopes for a better tomorrow.

Tamil legend has it that the entire Ramavataram was written in one night by Ganesha, who is said to have written the poems that Kambar dictated to him during the night, as Kambar procrastinated the work till the day before the deadline set by the King.