Prithvi is one of several Sanskrit names for the Earth Mother, more commonly known as Mother Bhumi Devi. Prithvi is the personification of the Earth, and is therefore also known as Prithivi Tattwa, the essence of the element earth. Prithvi is also called Dhra, Dharti, or Dhrithri, meaning ‘that which holds everything’.

As Prithvi Devi, she is one of two wives of Lord Vishnu, His other wife being Lakshmi Devi (Sridevi). In fact, Prithvi is another form of Laxmi. As Prithvi Mata, “Mother Earth”, she contrasts with Dyaus Pita, who is “Father Sky”. In the Rigveda, Earth and Sky are frequently addressed in the dual, which may indicate the idea of two complementary half-shells.

Prithvi is the wife of Dyaus Pita (‘Father Dyaus’), and the widespread belief that these two were originally a single deity appears to be mistaken. (See Dyavaprthivi). Prithvi is known to be the mother of Indra and Agni. When Lord Indra killed Dyaus Pita, she applauded and married him.

Prithvi, or Mother Bhumi, is associated with the cow. Prithu, an incarnation of Vishnu, milked her in the cow’s form to get food from her. Prithvi also appears in Early Buddhism, where she is mentioned in the Pali Canon, dispelling the temptation figure Mara by attesting to Gautama Buddha’s worthiness to attain enlightenment.

Prithvi Sukta (Bhumi Sukta) is a celebrated hymn of the Atharva Veda (AVS 12.1), which consists of 63 verses dedicated to Prthivi (the Earth). In art, she is typically represented as a woman with four arms and a green complexion.

Mother Bhumi is also understood to be the consort of Lord Varaha. The demon Narakasura, whose killing by Krishna is celebrated as the festival of Diwali, is Bhumi Devi’s son. She is also the mother of Sita, so it is not surprising that baby Sita was found in a ploughed field. According to the Uttara-kanda, when Sita finally leaves her husband Rama, she returns to Bhumi.

Several female deities are believed to have had births similar to Sita. Alamelu Thayar of Tiruchendur, for example, was said to have been found in a ploughed field by Akasa Raja. Andal from Srivilliputtur in Tamil Nadu was found under a Tulasi plant by Perialvar.

Mother Bhumi is often depicted in votive statuary, seated on a square platform which rests on the back of four elephants, who represent the four corners of the world. When depicted with four arms, the paraphernalia she holds are a pomegranate, a water vessel, a bowl containing healing herbs, and another containing vegetables. When shown with two arms, she holds a blue lotus known as Komud or Uttpal, the night lotus, in the right hand. The left hand may be in the Abhaya Mudra (fearlessness), or the Lolahasta Mudra, which is an aesthetic pose meant to mimic the tail of a cow. 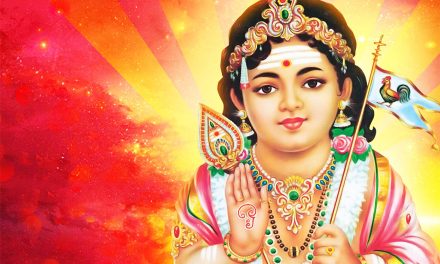 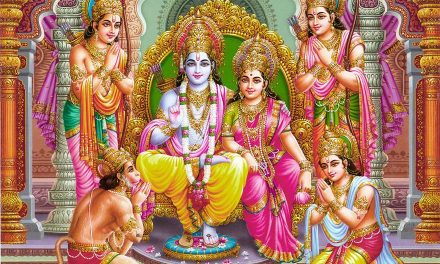 The Personality of Lord Rama