Datta Jayanti: The Appearance of Dattatreya, the Triple Avatar 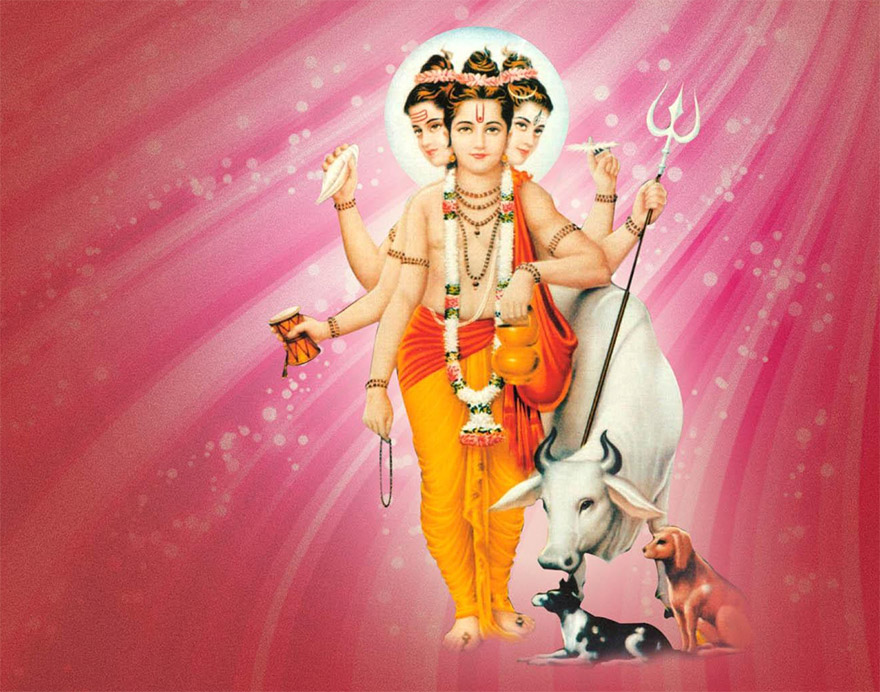 The birth of Shri Datta, Who incarnated on the full moon day (pournima) of the Hindu lunar month of Margshirsha, is celebrated as Datta Jayanti. In the previous eras, the atrocities of demonic forces increased tremendously; hence, Shri Dattatreya incarnated in different forms and destroyed the demons. On Datta Jayanti, Shri Datta’s principle is 1,000 times more active on Earth as compared to any other day. By worshipping Shri Datta with full devotion, one can derive maximum benefit of the Datta principle.

The One Who has been endowed with the anubhuti (spir­itual experience) of the unmanifest (nirguna) is called Datta. The anubhuti of nirguna essentially means realization that He is the soul (atma) or He has attained God-Realization.

Shri Datta is also known as Dattatreya, Avadhuta and Digambara.

History of Shri Datta’s birth According to the Puranas

Anasuya, the wife of Sage Atri, was well known for Her chastity (pativrata). As a result, she had acquired tremendous power, due to which Shri Indra and other deities felt threatened. So, they went to Shri Brahma, Shri Vishnu and Shri Mahesh (Shiva) and told Their agony. The trinity of Deities decided to test Anasuya’s chastity. 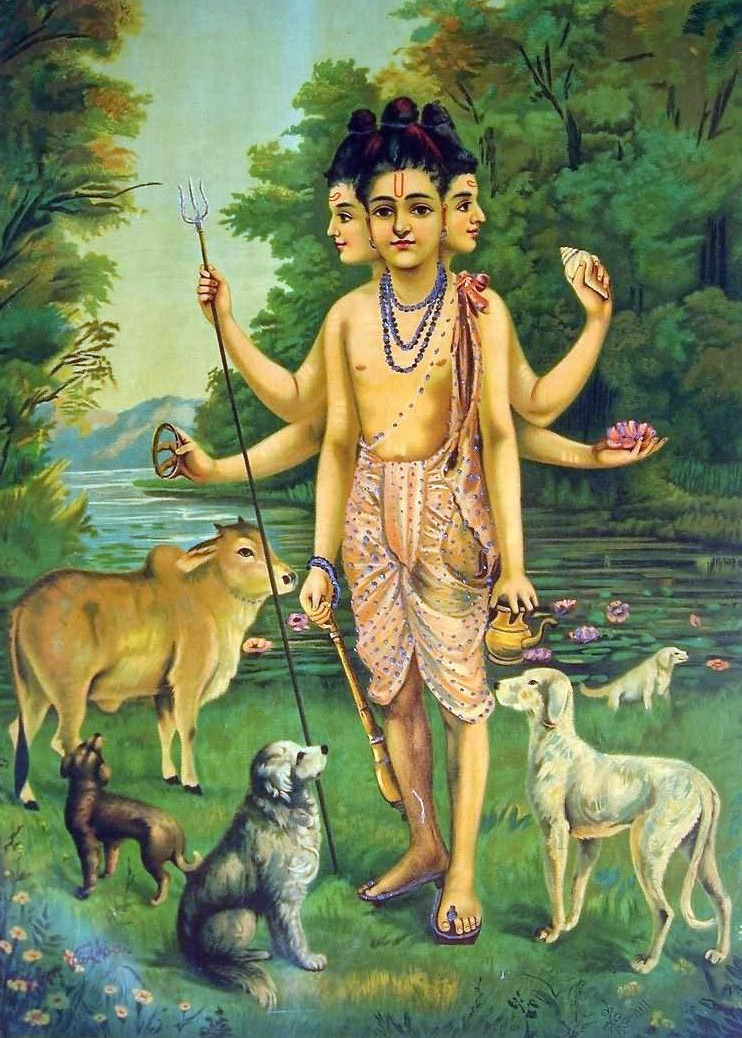 Once, when Her husband Sage Atri had gone out, the trinity of Deities disguised as guests and approached Anasuya asking for alms. She requested Them to wait till Sage Atri re­turned; but They insisted on being served food immediately. They further said, ‘we have heard that you serve guests food as per their wishes in your hermitage; that is why, we have come here.’ Anasuya agreed to serve Them food as per their wishes. The Deities laid down a condition that She should serve Them in nude. Baffled by this, She thought, ‘my mind is pure, the prowess of my husband’s penance will save me.’ She then contemplated upon her husband and got a thought, ‘these guests are my children.’ The trinity of Deities immediately turned into three little crying babies ! She took Them in Her arms and fed Them Her breast milk.

Just then, Sage Atri returned and She narrated everything to Him. He recognized the true form of the babies and offered obei­sance to Them. The trinity of Deities was appeased and They appeared in front of Sage Atri and Anasuya and told Them to ask for a boon. Sage Atri and Anasuya wanted the babies to be with them. The Deities blessed the couple and left for Their abodes.

Chandra (Moon), Datta and Durvasa were Lord Brahma, Lord Vishnu and Lord Mahesh respectively. Chandra and Durvasa left to undertake penance, however, Datta stayed back on the earth to accomplish the mission of Shri Vishnu. Thus, the origin of the Datta Parampara guru lineage commenced from here onwards.

Meaning According to the Science of Spirituality

The word ‘Atri’ is made up of A+tri (‘A’ means absent & ‘tri’ means triad), hence this name means – absence of the triad. Let us understand this as follows –

The one in whom the triads of the wakeful state, dream state and deep sleep states are absent,

The one in whom the triads of subtle components, Sattva-Raja-Tama are absent.

Shri Datta is an incarnation of Shri Vishnu, hence His mission includes sustenance, creation and developing devotion in people, and teaching people how to lead an ideal and Blissful life.

Shri Datta also provides forward momentum to the ancestors in their after death journey.

There is no specific spiritual ritual for celebrating Datta Jayanti. However, it is celebrated as follows –

1. Seven days prior to Datta Jayanti, there is a tradition of recitation of the Shri Gurucharitra (a Holy scripture which describes the glory of Lord Datta)

2. Other prevalent types of devotions are – singing bhajans (Holy songs) and puja (ritualistic worship). Puja of Lord Datta is performed in the following way –

2.1 Before commencing the puja, apply two vertical lines on the forehead using the ring finger of the right hand. This assists in obtaining Lord Datta principle and awakens bhava (spiritual emotion) which results in achieving concentration of the mind while doing the puja.

2.2 When performing the puja, apply gandha (sandalwood paste) using the ring finger of the right hand, then offer haldi (turmeric) and kumkum (vermilion) using ring finger and thumb at the Holy Feet of Lord Datta. Joining the tips of ring finger and the thumb activates the Anahata-chakra, which helps in creation of devotion.

2.3 Specific flowers attract a particular principle of a deity. Flowers Common Jasmine and Tuberose have the ability to attract maximum Lord Datta principle. When these flowers are offered at the Holy Feet of Deities in specific number and pattern, it rapidly attracts that deity’s divine principle. Thus, when offering flowers to Lord Datta, it should be offered in the count of 7 or multiple of 7 in a pattern of a diamond.

2.4 Specific fragrance attracts a particular principle of a deity. Lord Datta’s principle gets rapidly attracted towards fragrances of Sandalwood, Screwpine, Lawsonia alba and Pinus Succinifera. Hence, by using incense sticks of these fragrances, one obtains maximum benefits of the Datta principle. Lighting two incense sticks at a time is more beneficial for seekers in the primary stages of sadhana (spiritual practice). The incense stick should be held in the right hand using the index finger and the thumb and should be moved three times consecutively in clockwise direction in front of the deity’s picture or idol.

2.5 One should perform circumambulation around the deity of Shri Datta seven times or in the multiples of seven.

3. On Datta Jayanti, the Datta principle is 1,000 times more active than on any other day. Hence, one can derive maximum benefit from it by chanting ‘Shree Gurudev Datta’ for at least 1-2 hours. If possible one can chant up to 4-6 hours. If one is not able to monitor number of hours, one can chant as much as possible throughout the day.

Datta means experiencing ‘I am the soul’. We all can walk, talk, and breathe only because of the soul in us. This indicates presence of God in us. We cannot exist without the soul. Once we realize this, we will be able to behave with everyone lovingly. Let us make efforts to achieve this on Datta Jayanti. 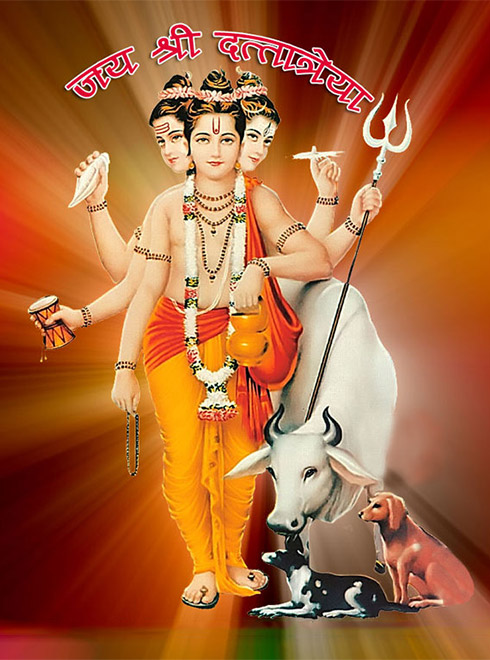 Shri Datta is also called Avadhūt, which means the One Who destroys ego. Let us pray – ‘O Dattatreya, please give me strength and intellect to destroy the ego.’

Another name of Shri Datta is Digamabar, which means, The One Who is all pervading. It means He is everywhere. In comparison, we are nothing. Let us pray – ‘O Shri Datta, please teach us how to surrender ourselves.’