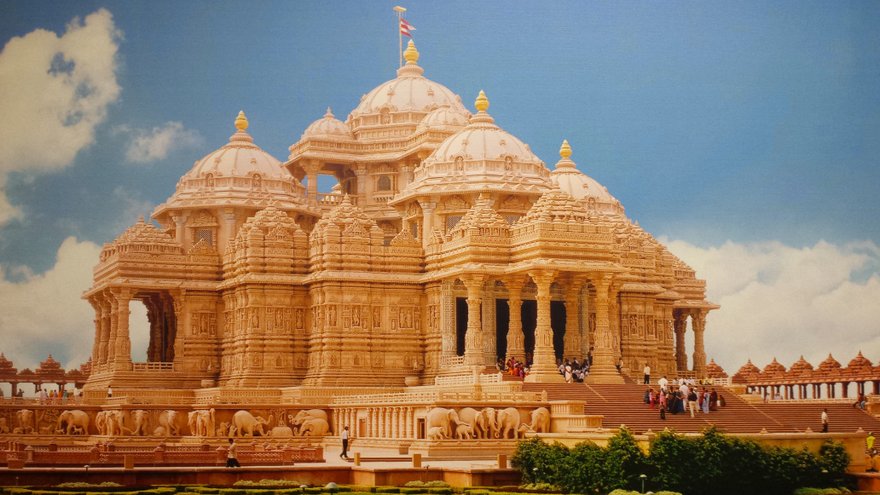 Akshardham is a Hindu temple complex in Delhi, India. Also referred to as Delhi Akshardham or Swaminarayan Akshardham, the complex displays centuries of traditional Indian and Hindu culture, spirituality, and architecture. It featured in the 2009 edition of the Guinness World Records book for being the largest Hindu temple in the world.

Akshardham temple in Delhi, India is recognized as the world’s largest temple by Guinness World Records. It was consecrated in November 2005 by Pramukh Swami Maharaj, the spiritual leader of BAPS (Bochasanwasi Shri Akshar Purushottam Swaminarayan Sanstha).

The temple covers 32 acres (13 hectares) and is built to look as if is hundreds of years old. It measures 356 ft. long, 316 ft. wide and 141 ft. high, covering an area of 86,342 sq. ft. The main building at the centre of the complex is a 141 ft high monument of Swaminarayan.It is designed according to ancient Vedic texts known as the Sthapatya-Shastra, it features a blend of architecutral styles from across India. 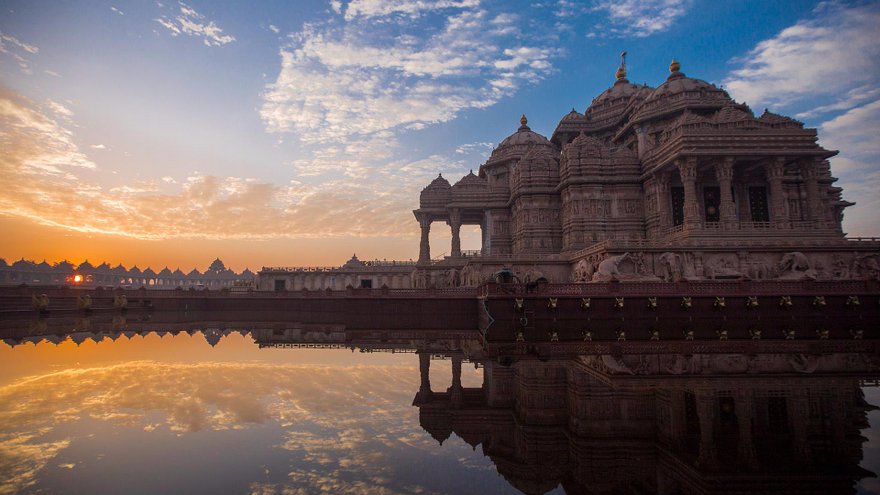 Built with a combination of marble, sandstone and wood the building is fabulously impressive. It is built according to ancient standards without using any steel and as such is designed to last 1000 years. The intricate nature of the carving both inside and out is stunning and has lovingly restored an almost lost art and is already influencing other temple building projects throughout India and the world.

The temple building covers 32 acres. 11,000 people worked on its construction. It was completed in just 5 years and 850 volunteers work there daily also It receives 100,000 visitors a week.

The complex features a large central monument crafted entirely of stone, exhibitions on incidents from the life of Swaminarayan and the history of India, an IMAX feature, a musical fountain, and large landscaped gardens.

Some of the Pictures of Akshardham are Shown Below: 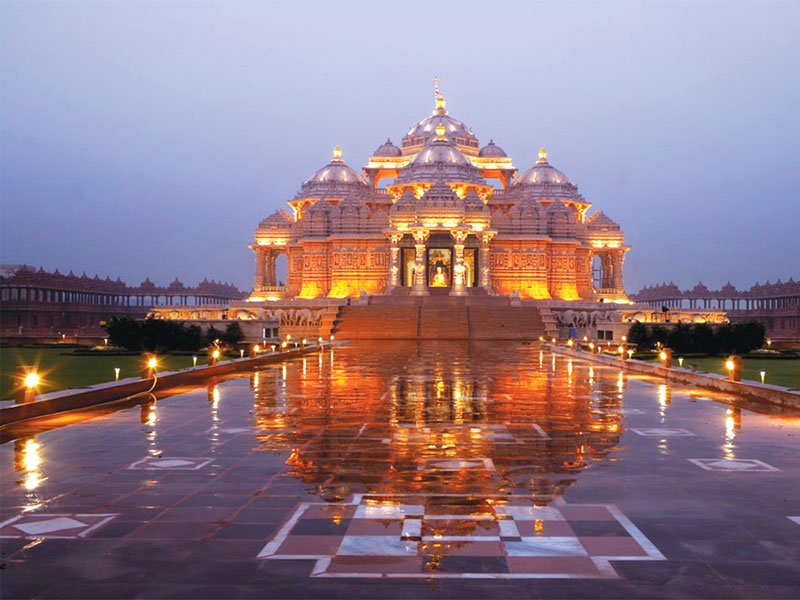 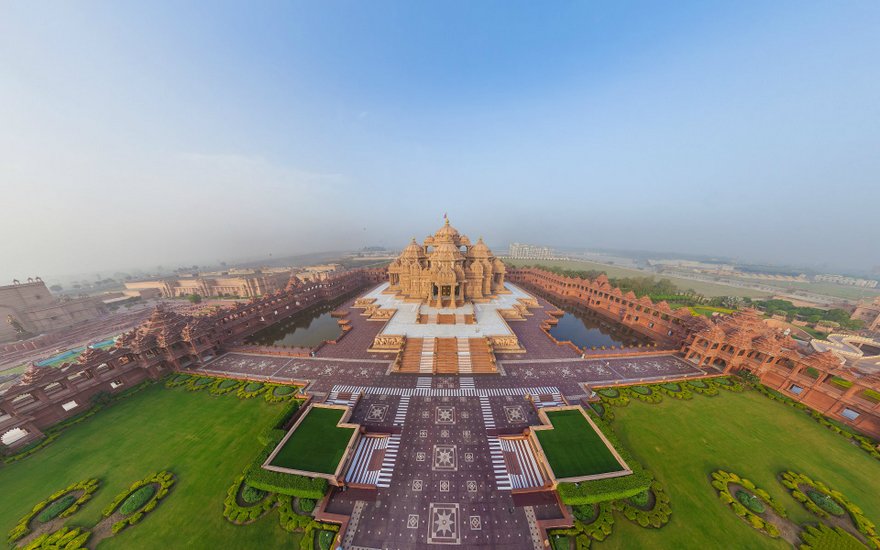 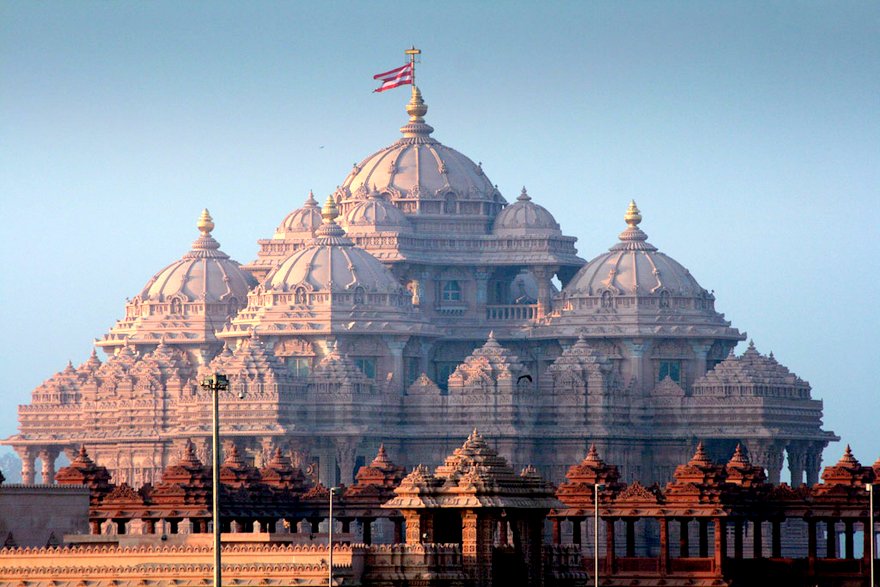 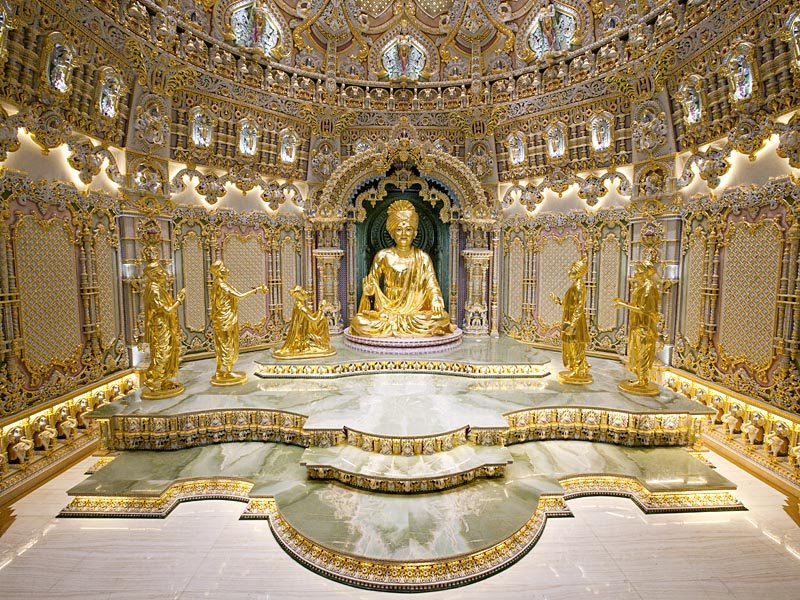 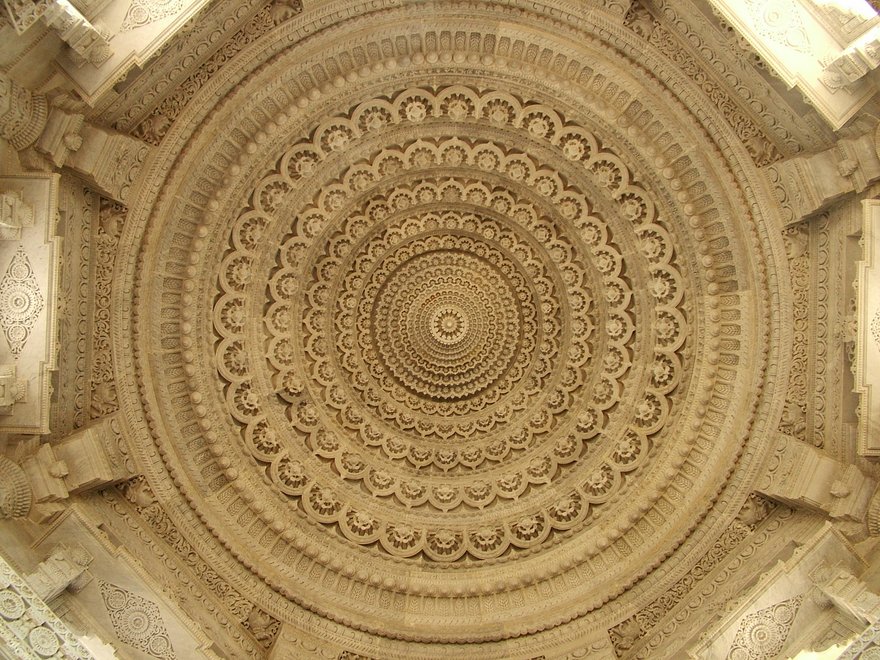 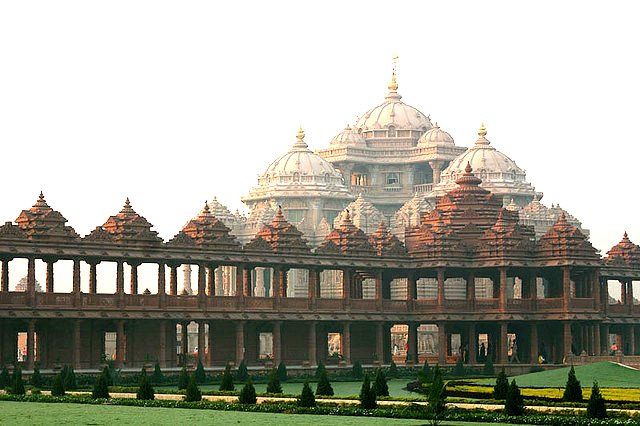 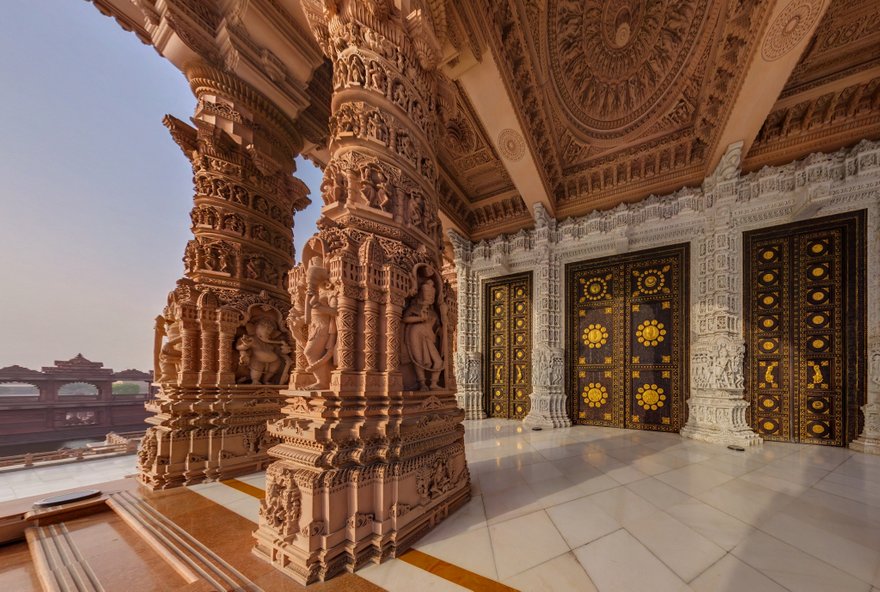 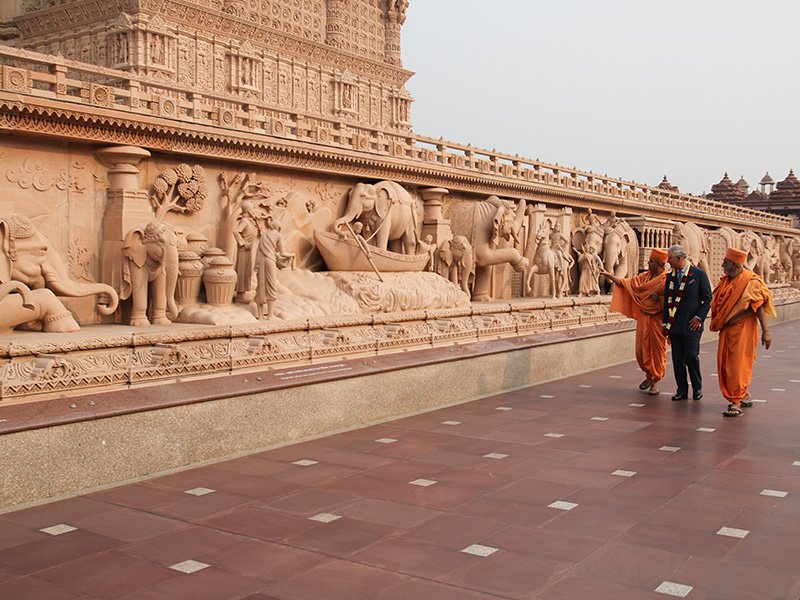 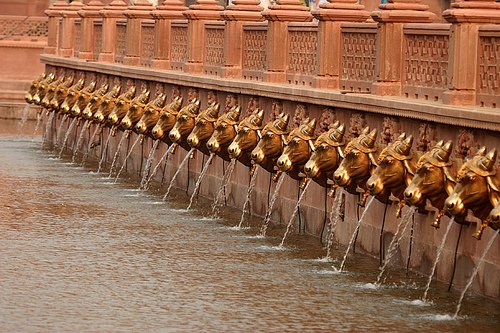 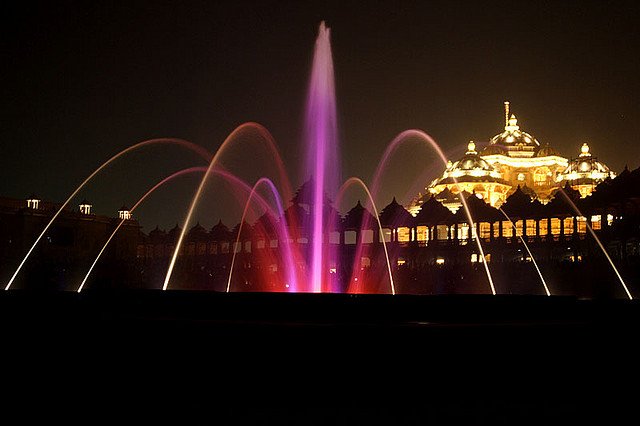 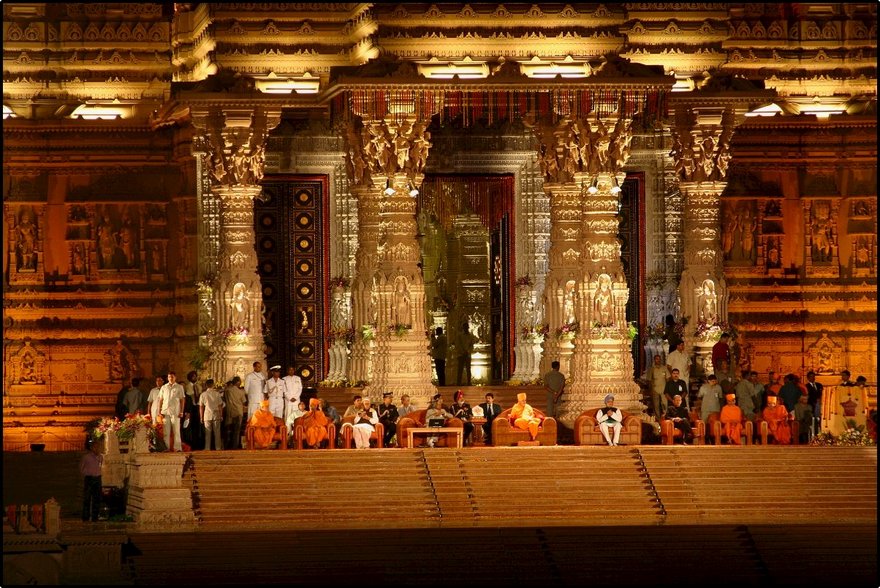 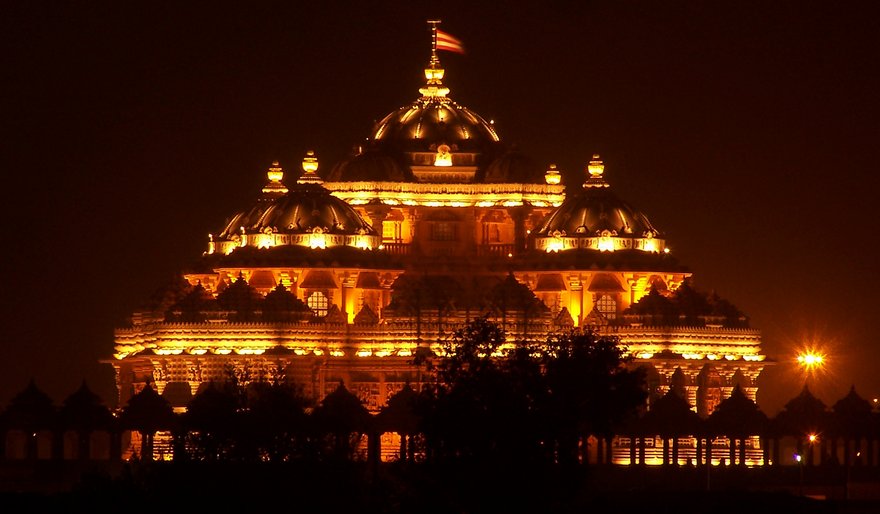 Akshardham was consecrated on 6 November 2005 by Pramukh Swami Maharaj, and ceremoniously dedicated to the nation by the President of India, Dr. A.P.J. Abdul Kalam, the Prime Minister, Manmohan Singh, and the Leader of the Opposition in the Indian Parliament, Lal Krishna Advani, with the presence of 25,000 guests.

The record was presented for Akshardham as the World’s Largest Comprehensive Hindu Temple. 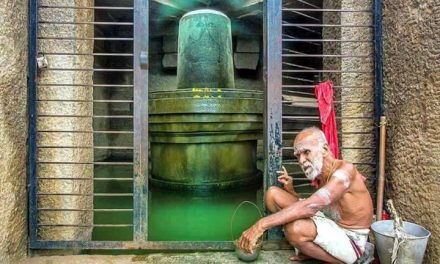