Vishnupur is a city in Bankura District in the state of West Bengal, India, famous for its terracotta temples and long history of association with Gaudiya Vaisnavas. During the reign of Aurangzeb (1658-1707), many of Lord Krsna’s temples in Vrindavan dhama were forced to shut their doors, and the Deities and devotees were spirited off to safer quarters. Vishnupur was one of many such safe havens, and the parishad associates of Lord Caitanya are known to have had many pastimes there.

The area around Vishnupur is also called Mallabhum, after the Malla rulers, many of whom were Vaisnavas. They built the famous terracotta temples here during the 17th and 18th centuries, and the beauty of these adobe structures represents the best of Bengal’s classical architecture. Over the years, the Sun has done a number of Feature presentations on the beautiful devotional imagery found in these Bengali temples ( 1, 2, 3, 4, 5 ).

For almost a thousand years, Vishnupur was the capital of the Malla kings of Mallabhum, of which Bankura was a part, and they remained here until their power waned, when Mughal rule finally weakened under the last monarchs of the dynasty.

Aside from the terracotta architectural artifacts that depict how Sri Krsna’s reputation spread far and wide from His home in Vrindavan to every town and village in India, there is a fascinating aspect of history that has to do with the dynamics amongst the Gaudiya Vaisnava community, and how they established their preaching presence throughout Bengal in the advent of Lord Caitanya Mahaprabhu’s manifest presence.

In the book, ‘Temple to Love: Architecture and Devotion in Seventeenth-Century Bengal’ by Pika Ghosh, we find an academic presentation on this Vaisnava cultural phenomenon, which deals in part with the Gaudiya presence in Vishnupur, and Srinivas Acarya’s influence there.

“The analogy between Vishnupur’s founding and Vrindavan’s rediscovery becomes even more powerful when it is recalled that Srinivas was himself regarded as an incarnation of Chaitanya during the seventeenth and eighteenth centuries. The association of Vishnupur with Vrindavan was thus strengthened to the point of identification, both being mapped as part of a single Gaudiya Vaishnava world. Such strategies deployed across multiple media suggest a deliberate attempt to yoke the two Gaudiya Vaishnava centers together and present Srinivas’s Vishnupur as a reincarnation of Chaitanya’s Vrindavan.

By the mid-eighteenth century, when the last Ratna temples were built at Vishnupur, this replication of the newly reconstituted sacred center at Vrindavan may have developed other implications as well. Vrindavan was on the brink of being lost a second time. Now promoting this new Vrindavan may have been an attempt to replace it and thereby preserve it and maintain continuity in a different sense. Many of Vrindavan’s temples shut their doors and dispatched their deities to safer sites in anticipation of difficult times during Aurangzeb’s reign. The image of Govindadeva was removed from the temple (whose sanctum may have been razed at this time), transported to various temporary homes, and finally installed in a permanent temple at Amber. This transfer of the most important image initiated the creation of yet another Vrindavan, this one called Kanak (golden) Vrindavan, that is, one superior to even the original one.

Vishnupur was therefore not unique in replicating an earthly site and thereby replenishing the eternal realm. The Vaishnavas’ shifting of the center of their sacred cartography to a more protected area at the empire’s periphery in Bengal, where the turbulences in the heart of the Gangnetic Valley would reverberate only slowly, may have been a response to the political contingencies of the period.
Involving the past as an instrument for change in the present is a mechanism that is used widely in the construction of sacred centers. The consecutive creation of multiple sacred centers in rapid succession, replicating an ideal realm by repeated mappings that legitimate each other, is less common. In this case, no absolute mapping of Vrindavan can be recovered from the materials available at Vishnupur. Rather, through temple construction, oral lore, ritual worship, landscaping, and the production of texts, Vishnupur was transformed into a parallel sacred center.

The careful mediation of the forms and institutions of the original and the presentation of the message of this religious formation in local forms for its new hub suggests a shrewd awareness of and attempt to survive within the political realities of seventeenth-century Bengal.

That it was acceptable for this Hindu holy site to be re-created in an Indo-Islamic manner is testimony to the fluidity of the cultural environment of this period. It also reminds us of the negotiated and mutable nature of markers erected to articulate and unify a new religious formation, which simultaneously allow it to define itself by specifying its boundaries. In the current political climate of South Asia, when fervent religious nationalisms are rendering such interplay between the region’s dominant religious cultures inconceivable, the historical moments when Hindu cultural centers could draw on mosques to give shape to earthly manifestations of the divine realm offer hope for the future.” 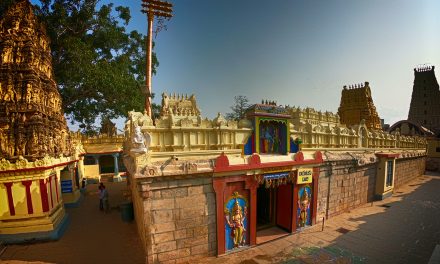