Simhachalam, the Hill of the Lion (Simha means “lion”, and chalam means “hill”), is located 18 km from Vishakapatnam in Andhra Pradesh. Here we find a most beautiful 11th century temple in which resides the presiding Deity, Sri Varaha Laksmi-narasimha. Millions of devotees each year come to visit Lord Varaha Lakshmi-narasimha, Whose form combines the iconographic features of Varaha and Narasimha.

The Deity resembles a Shivalingam covered with sandalpaste. Sandal paste was offered to Lord Nrsimhadev to appease His fury after the slaying of Hiranyakasipu. Once a year only, during the Chandana Visarjana, the Visaka day in May, (Akshaya Tritiya day), the sandal paste is removed from the Deity so the devotees will get to see the real Form of the Lord. The Deity is sculpted in tribhanga posture, having two hands with the head of a lion on a human torso.

The Nijaroopa Darshan, or appearance in true form, continues for 12 hours and lakhs of people from various parts of the State gather at the temple to worship the Deity. Peeling off the old sandal paste from the Deity and applying new paste takes about 18 hours. Devotees get to see the true form of the deity during the inter regnum.

Sandalwood is specially brought from Vellipoottur in Tamil Nadu to be used in preparing the paste which is applied three times a year, on Vaisakha Pournami, Jyestha Pournami and Ashadha Pournami. About 120 kg of sandal paste is applied each time.

On Sravana Pournami, the Lord is covered in the sandal and decorated with opulent ornaments, known as Karala Chandana Samarpana. Today, Simhachalam temple is known as the second richest temple, after Tirupati, for donations from pilgrims.

Puranic History of the Temple

The Sthala Purana for the temple describes the temple in 32 chapters, and Vedavyasa wrote about the original temple in the Skanda Purana.

According to Puranic records, Hiranyakasipu tried to punish his son Prahlada by throwing him into the sea. He then placed Simhachalam hill over his head in order to drown him. Lord Narasimha rescued Prahlada, tilted the hill by standing it on one side so that Prahlada could escape. Later Prahlada founded this shrine.

The Sthala Purana consists of a further account of the foundation of the temple. The temple was at one time a favorite resort of the demigods, but fell into disuse. Urvashi, the divine apsara, informed Pururavas that she had come to the Simhadri hill when Lord Narayana came as Narasimha in order to save Prahlada. Urvashi with Pururavas found the Gangadhara rivulet flowing west.

Pururavas wished to have darshan of the Lord through penance. On the third day of meditation he saw the Lord in his dream, telling Pururavas that an ant-hill in front of the king held the Deity, and the king should offer flowers, sandal wood, music, lamps, and incense to the Lord. The king woke up, searched the anthill, found the Deity, renovated the temple and consecrated it. However, he did not find the Lord’s feet. The Lord informed the king that the feet will not be visible, and are hidden in the earth,. Sight of them will get one salvation, so they should not be seen in pure form, but only covered with sandal paste. The exception is for one day on Akshaya Tritiya, when the mere sight of the Lord’s feet is enough to bestow salvation. The Vyasa pournami, the Ashadha pournami days, and the Kalyanotsava in the first week of April are also important festival days here.

The Simhachalam temple faces the West unlike so many others which face to the East. An east-facing entrance is said to bring prosperity, while the west-facing entrance brings victory. This ancient temple was renovated by the Chalukyas in the 11th century and again by the Eastern Gangas in the 13th century. Tamil Cholas and Vijayanagar emperors also patronized it. Built on a hill, the temple has exquisitely carved halls, with extensive application of both Chalukyan and Orissan styles of architecture.

The inscriptions on the walls and pillars provide a great deal of information on the temple’s history. There is an inscription dated 1099 AD belonging to King Kulottungachola, who conquered Kalinga. Another belongs to the Velnati Chief, Gonka III and is dated 1137 AD, and states that he covered the image of the Lord with gold. There are a number of inscriptions from the Eastern Ganga kings of Kalinga. King Narasimha I constructed the central shrine, the Mukhamantapa, the Natyamantapa, etc. The Reddy king of Rajahmundry, the Vishnu-Vardhana Chakravarthins of Panchadarla and others also contributed to enriching the temple. Sri Krishna Devaraya visited this temple twice in 1516 and 1519 AD, and the jewelry offered by him to the Lord, including an emerald necklace, can still be seen here.

The temple is 800 feet above sea level. A flight of steps leads all the way from the foot to the top of the hill, to the temple. At the foot of the hill there are choultries for the pilgrims to stay. Many take bath in the Pushkarani, located near to the foothill. Pilgrims process up through a grove of trees. On the top north side is found a wooded hollow surrounded by a wide circle, resembling an amphitheater. This is the temple of Lord Narasimha of the Northern Circars.

Simhachalam is surrounded by large mountain upon which grow many trees with great medicinal values. By visiting this sthalam, pilgrims are not only blessed by getting darshan of Sri Narasimhadev, but also benefit from His mercy by way of the air, which is mixed with medical herbs that will cure many diseases.

The temple comprises of a square shrine, with a tall gopura and mukhamantapa having a small circular tower over it. The natyamandapam has a stone car drawn by two horses, and is enclosed by a veranda, into which scenes from the Vishnu Purana have been sculpted with great skill.

The temple artwork is similar to that of Konark, with elephants, flowers and plants carved into the walls and lintels. On the outer walls of the sanctum, images of King Narasimha are presented in various postures. The Kalyana Mandapa within the temple has 16 pillars with a bas relief depicting the incarnations of Vishnu.

Outside the enclosure, to the north is the kalyanamantapam that has 96 exquisitely carved pillars, where the Kalyana Utsava is performed on the eleventh day of the Suklapaksha, Chaitramasa every year. Here Lord Vishnu is represented as Matsya, Dhanvantri and Varuna. There are also many murtis of Lord Narasimha here. A perennial spring called gangadhara is found here and is said to have medicinal properties.

One of the pillars in the Mukhantantapa is named Kappam Stambham, or the Pillar of Tribute. It attracts a large number of pilgrims, in part due to the belief that the pillar has the power to cure cattle of diseases, and to eliminate barrenness in women. 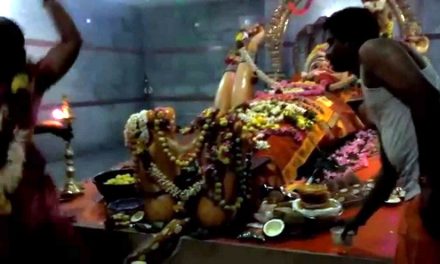