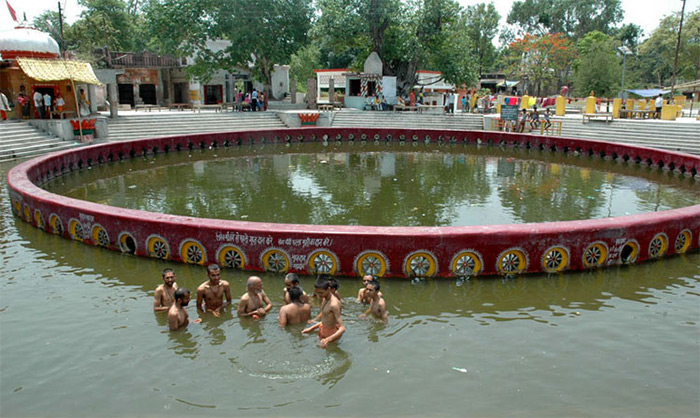 Naimisharanya is located in the state of Uttar Pradesh about 90 km from its capital Lucknow in the district of Sitapur. Naimisharanya is situated on the left bank of the river Gomathi, which is a tributary of the river Ganges. Naimisharanya is popularly known as Neemsar or Naimisha. In the Bhagavata Purana it is mentioned: naimishe animisha-kshetre. This means that Naimisha is the abode of Lord Vishnu called by his name Animisha. Sri Vishnu Sahasranama (Sloka 23) describes Lord Vishnu as Animisha, which means the one who is ever awake, ever alert, and ever vigilant. He is the wisest of all:

Naimisharanya is also called as Nemisharanya. Nemi means the outer surface of the disc (chakra) and the place where it fell is called by the name of Nemisharanya or popularly called as Naimisharanya. The spot where the Nemi of the chakra fell came to be known as Chakra Tirtha (a holy bathing place in the shape of a chakra) and the surrounding forest area as Naimisharanya. It is believed and said that once upon a time Lord Maha Vishnu had killed demons at this place within a split second – a nimisha (nimisha is a unit of time, the time it takes to blink) and thence forth this are was called as Naimishaaranya.

Naimisharanya has a parikrama (circumambulation) path of 16 km, in which all the sacred places in India are believed to be located. In every ancient literary composition (grantha) – starting from Srimad Bhagavata to the presentation of Sri Ram Charita Manas, the site Naimisharanya has been mentioned and described in each and every one of them.

The history of Naimisharanya is believed to have existed with the onset of the universe. The truth and significance of this sacred place was revealed to the saints and sages of that period and this divine knowledge percolated down through successive generations. It is believed that Naimisharanya was a place of pilgrimage in the satya yuga, and is the first ever pilgrimage site to be laid out on earth.

It is said to be the eighth Aranya and also as Astama Vaikunta. 33 crore devathas, 3½ crore temples, and the 88,000 sages reside always here. Therefore, it is considered as a pious land where every deed performed receives fruitful results. This land has eternal meaning and its might is beyond the explanation in any possible words.

In the sacred and religious domain of Naimisharanya, there are several sites of historical importance that display the might of the Supreme Lord. Every place has some significance that teaches the human race some lessons to lead a good life with strong belief in God. The Bhagavata Purana says that there is no holy place on earth that compares to this place. There are several stories about Naimisharanya throughout the Puranas.

It is the place where Lord Maha Vishnu killed a demon by the name Durjaya and his followers with his Sudarshana Chakra. It is also said that when Lord Maha Vishnu killed the demon Gayasura with his Sudarshana Chakra his body was cut into three parts that fell at three places, namely Paada Gaya (Gaya Kshetra in Bihar), Naabhi Gaya in Naimisharanya and Kapali Gaya in Badri Kshetra (Badrinath). Hence Naimisharanya is also called Nabhi Gaya Kshetra.

It is the place where Brahma Mano Maya Chakra struck the earth, and is now popularly known as Chakra Theertha. Swayambhuva Manu and Satrupa performed yaga and rigorous penance for 23,000 years at this place for begetting Lord Narayana as their son.

The whole episode related to Sage Dhadhichi donating his back bone to the devas happenedat at Naimisharanya. He donated his bones to the devas at this ashram to make weapons to defeat the demons (Vritrasura).

It is believed that Lord Sri Rama performed Aswamedha yaga at this place after killing Ravana. It is also said that this is the place where Goddess Sita Devi was accepted by Mother Earth. After Luv and Kush, the sons of Lord Sri Rama, got united with their father she vanished here.

Hanuman Garhi in Naimisharanya is the place where Lord Hanuman, after releasing Sri Rama and Lakshmana from the clutches of Ahi Ravan, brought them on his shoulders from Pathala Loka.

It is the land of Naimisharanya where Lord Vedavyasa composed the 4 Vedas, 6 Shastras and 18 Puranas and preached Samaveda to his beloved disciple – Maharishi Gemini. This is also where the Srimad Bhagavatam was spoken.

In Mahabharata it is said, “Anyone who fasts, prays, and attains perfection at Naimisharanya finds happiness in all the worlds.”

With the onset of the universe, 88,000 saints and sages went to Lord Brahma and prayed to him with the notion to know the ideal place for uninterrupted meditation, a place which will liberate one from all the difficulties and sins, a place where one can get divine knowledge and for performing spiritual rites for the welfare of all humanity.

After hearing their prayers Lord Brahma told them that he would send his disc (called Manomaya Chakra) and it will direct them to the sacred spot. He also said that wherever its axis will fall, that particular place will be the focal point of their sacred place for meditation. Having said this, He released his Chakra and all the saints followed its path.

After completing several revolutions around the universe, finally the Chakrasettled at a deserted place and addressed the saints that, this place which is on the banks of Adi Ganga Gomati river is free from all sins and calamities. Moreover, any deed performed on this sacred place will give beneficial results. There is no other holy place equal to this one in this entire universe.

Saying this, the Chakra fell into the Yagyashala. Due to its powerful fall with thunderous speed the underworlds broke down and huge gushes of water sprouted from underneath. Lord Brahma requested Adi Shakti Goddess Sri Lalitha Devi to stop the “Brahma Manomaya Chakra”. Her divine power stopped that chakra and thence forth settled at this place as Lingadhaarini.

Since then, this place where the axis of Brahma Manomaya Chakra (Nemi) fell surrounded by the forest came to be known as Nemisharanya or Naimisharanya, and it became the central place for performing meditation by all the saints and sages for all yugas.

The spot where the Chakra struck the earth and water sprung out became known as Chakra Tirtha. It is said to be the center of the universe. It is said that the large sweet-water spring that marks the location of Chakra Tirtha has no bottom.

The British wanted to disprove this as mythology, so they brought a cable and attempted to find the bottom. After more than 1000 meters they ran out of cable and gave up.

It is said that if you bathe in Chakra Tirtha and make an offering to the presiding deity, Sri Lalitha Devi, on a full Moon or new Moon day that falls on a Monday, you will wash away all the sins committed in a lifetime. Shakthi Peeth is situated here and Goddess Sri Lalitha Devi is being worshipped here as the female presiding deity of Naimisharanya.

Chakra Theertha is sacred and the destroyer of all kinds of sins and the top most among all the tirthas. It is said that by taking bath in Chakra Tirtha, Graha Peeda will vanish and the sins of 10 earlier generations and 10 future generations will also vanish. This place is ideal to provide complete satisfaction and salvation to the forefathers.

Almost all puranas talk of Naimisharanya, its significance and importance.
There are unlimited numbers of Tirthas on earth but this is the first among them. Naimisharanya is the most sacred and best among all the Tirthas. The importance of this Tirtha is 10 times than that of any other Tirtha. This is a holy place where Siddhi can be attained quickly. Thirty thousand Tirthas always reside in this area.

This Tirtha is very famous in the three planetary systems as the destroyer of sins and a favorite place of Trimurthi (Brahma, Vishnu and Maheswara). For each yuga one tirtha is most important. In satya yuga it is Naimisha Theertha, Pushkara Tirtha in Treta Yuga, Kurukshetra in in Dwapara Yuga and Ganga in Kali Yuga. Naimisharanya is the Yagna place of the Devas, it is worshipped by the rishis. The sacred Gomati river exists here.

One who takes a bath here will have a place in heaven. Worldly problems are solved by taking bath in this Tirtha. All the Tirthas, rivers and seas of the Earth exist every moment here. One who takes bath here gets the benefit of bathing at all the Tirthas. Taking bath in Ganga, or arriving at Varanasi, Dwaraka and Badarikasrama, yield punya but one gets punya as soon as he leaves his house for this Tirtha (Naimishaaranya).

Much importance and significance is given for taking bath in Naimisharanya during Mahakumbha when Sun is in Mesha Raasi which happens once in 12 years.

One who dies in Naimisharanya does not face any problem. If Pitru Sraaddha (Pinda daan) is done here, ancestors get delivered. During chaturmasa, especially during Pitru Paksha, if charity is given at this Tirtha, the ancestors get satisfied till Kalpa paryanta. This is a punyadaayaka as well as a muktidayaka kshetra.

One who hears the Vishnu Charithra for one or two days at this Tirtha secures a place in Vaikunta. On residing in this Tirtha for a month and offering Jala arghya, people get the benefit of all Yagnas.

Holy Places to be visited at Naimisharanya

Suta Gaddhi where Suta Mahamuni sat while instructing the sages 5,000 years ago (reciting the Bhagavatam and other Puranas).

What to do at Naimisharanya

Take a bath in Chakra Tirtha and River Gomathi.

Getting to Naimisharanya by Road

Lucknow can be easily reached from Delhi, Kanpur, Agra, and Allahabad. Highways from all these places connect them with Lucknow. The major highways passing through Lucknow are N.H. – 25, N.H. – 28 and N.H. – 56.

From Lucknow the route is Hardoi Road – Sandila – Venigunj – Naimisharanya. (Distance from Lucknow is 100 km). There is also another route via Sitapur.

Regular bus facilities are available from Lucknow, Hardoi, and Sitapur.

It could be a good idea to take a taxi to Naimisharanya from Lucknow.

U.P. Tourism Development Corporation is running a tourist bus on this route.

Getting to Naimisharanya by Train

It is connected by train from Balaanaur, Dist. Hardoi, on the Balaanaur-Sitapur Branch Line on the Lucknow – Delhi main line of Northern Railway.

The train is available from Balaanaur to Sitapur and Naimisharanya is situated on the way. From Kanpur, by picking Kanpur to Balaanaur passenger train.

Delhi, where trains are available at regular intervals for Moradabad, a near by place to Hardoi.

One can also take a passenger train from Lucknow to Sitapur, and then get a bus to Naimisharanya from there.

Getting to Naimisharanya by Air

The nearest airport for Naimisharanya is in Amousi (Lucknow), which is at a distance of about 100 kms from Sitapur. From Lucknow airport one has to take the road route to reach Naimisharanya.

Where to stay in Naimisharanya?

Normally people come here for a day trip from either Lucknow or Sitapur. Right now not many facilities are available for stay or food at Naimisharanya. There is a traveler’s bungalow at Naimisharanya. Some religious trusts located here are providing shelter to the pilgrims. Dormitory facilities are available at Sri Balaji Mandir being organized by Sri Vikhanasa Samajam (Sri Vaishnava Sampradaya). They are also providing annadanam to the pilgrims. Orthodox persons have to go prepared to make their own food arrangements. 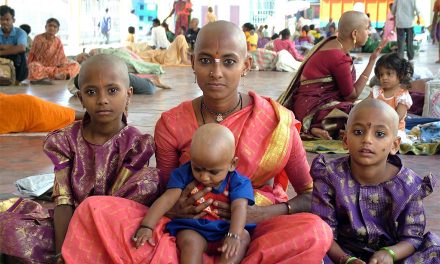