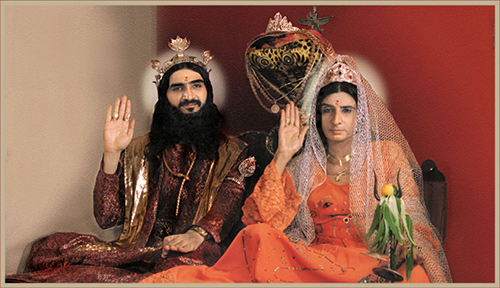 A man and woman born Parsi Zoroastrians call themselves as divine lights in their serpent avatars, and appear before shirt-tie-velvet cap-sporting devotees at closed-door assemblies held typically after midnight.

Polycephaly is a congenital disorder, in which a living thing has more than one head. It was a term we had come across some years ago, in an article in a wildlife magazine that discussed the discovery of a two-headed snake. Torn between two brains, deciding on a course of direction poses a challenge for such creatures, we remember the article pointing out, as we examined the holographic foil image on the badges that devotees in velvet skull caps had pinned on their shirts, as they gathered outside Parel’s Saibaba Municipal School last Monday night. 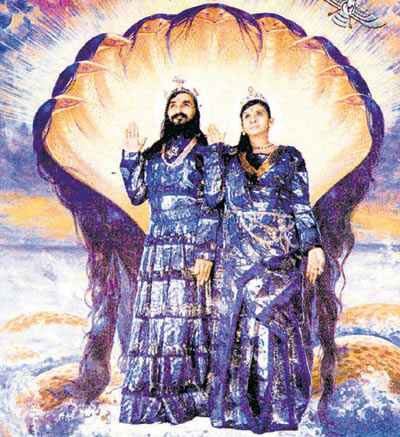 Sri Gururani Nagkanya and Sri Jimmy Nagputhra (serpent avatars), who usually hold a grand darbar in Ulhasnagar, were born Zoroastrian Parsis (she was born Nargis Minocher Bharucha; he, Jimmy Pallonji Master). Seen here in an advertisement in an afternoon paper to announce the Nagpanchami, Shravan Somvar and Ganesh Chaturthi Utsav.

The shiny hologram showed two human heads conjoined at the neck under an expanded cobra hood. One belonged to Sri Gururani Nagkanya (Yogini), and the second, was that of Divine Light Sri Jimmy Nagputhra (Yogiraj). The duo are not siamese twins, in case you were wondering.

Their symbols seemed a strange mix of Hinduism and Zoroastrianism, the latter, a monotheistic faith that the duo was born into, according to the pamphlets being distributed amongst their followers. Armed with nylon bags and tokens, over a dozen red velvet skull cap-wearing devotees (a practice followed by Parsi Zoroastrians while visiting the fire temple) were poised and ready to efficiently manage the shoe depository for thousands of followers expected on the auspicious Shravan Somvar. A volunteer led us to a group of trustees – press presence required their sanction. 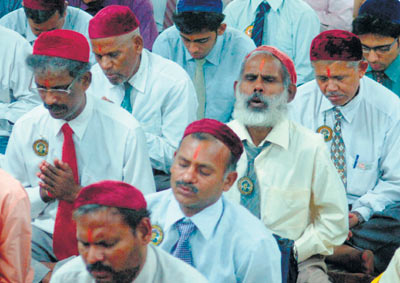 Vrinda Bijur and Bijay Yadav, who trace their association with the duo back to the ’70s, bombarded us with questions. “We realise you want to write an account of what you see,” they said, “but we would like to be sure that you see the truth.”

We were happy to get this ‘truth’ from followers, we pointed out, but the duo was hesitant. They leaned towards each other, and a quick, whispered discussion later, Yadav suggested we take a seat while they rallied some devotees for us to speak with.

“Not everyone can communicate properly,” he explained, happy to induct us with his own divine experience first. Telling us that he had experienced “immediate results” after two darshans, the Senior Superintendent at a maritime services company shared, “After I started believing in them, I dreamt that a large golden snake entered my home and I could communicate with it.”

This rung familiar and suddenly we realised why. “You are a Parselmouth Harry. Why didn’t you tell us?”

“I’m a what?” “A Parselmouth!” said Ron, “You can talk to snakes.” A real-life (albeit middle-aged) Harry Potter in our own neighbourhood — we were chuffed!

Others we spoke to had experienced mystical dreams and miracles, and still more accounts were to be found in pamphlets published and circulated by the divine duo’s Trust. One shocking account centred around a certain Prakash Totlani, who, the pamphlet stated “had become a victim of evil spirits… his head along with his neck would turn backwards at 360 degrees.”

Highlighting that the occurrence was similar to what had been depicted in the English film, The Exorcist, the pamphlet pointed out that when the incident occurred before Sri Gururani (seen in press ads dressed in a maxi, dazzling crown and heavy jewellery), a single word uttered “in HER Divine Voice” served as cure (she said, ‘Shanti!’)

‘Evilty’, was another term that popped up all evening. The pamphlet offered numerous instances of those afflicted with this condition — “Whenever Freddy got an attack of evilty (sic) he would shout on top of his voice late at nights (sic) and start flinging whatever came in his hands, even his plate of food,” it said, citing the example of a little boy, who, it seems to us was more likely afflicted with a case of the terrible-twos.

“What is this, Evilty?” We finally put the question to an emotional devotee. “Bad thoughts?”

“Not bad thoughts,” she said, “Evilty.” Well, now that you put it that way. It was close to midnight, and Sri Jimmy was expected any minute. We awaited his arrival on the ground floor, flanked by scores of velvet-capped men. Sachets of saffron powder, books (published by the Trust in Hindi and Marathi), cassettes and CDs of the divine voice were available for purchase.

The pamphlet expressly stated that the divine duo never expected anything in return for their selfless guidance, “However, religious scriptures preach that it is the duty of every human being to owe good deeds towards Divinity and the HOLY Trust which is formed in THEIR Holy Names in order to be freed from the debt towards the Almighty.”

Sri Jimmy alighted from his chariot — a silver Maruti Swift. Clad in a sky blue kurta, a heavily sequined shawl in gold draped over his shoulder, and a chunky gold snake-ring on one finger, he looked jolly enough to pass for a fit Santa Claus in fancy dress.

He stretched an arm out to bless the multitude, and we followed him to the hall upstairs where he took his place on one of two thrones on a bedecked stage. Here, with an electric halo whirring behind his head and a disco ball gizmo at his feet, he watched as 15 sari-clad ladies lined up before him, praised him and the absent Divyajyoti, before diving to the floor, standing up again, spinning around and repeating this sequence thrice in succession.

They took his leave, and were replaced by another 15 who performed a sort of slow, pose-centric dance to the rhythm of an accordion and tabla. This was followed by a couple of devotional songs sung by all attendees while a female devotee adorned Sri Jimmy with flowers.

Devotees proceeded to pull out individual metal platters and diyas to perform an arti after which we were led to the stage for blessings, and shown the exit. It was 2 am and the road outside was eerily still. We did feel blessed, but mainly because we didn’t see a single head spinning around 360 degrees.

The Hoysalas of Karnataka