Why is Krishna Blue? Why Not Red or Yellow or Any Other Color? 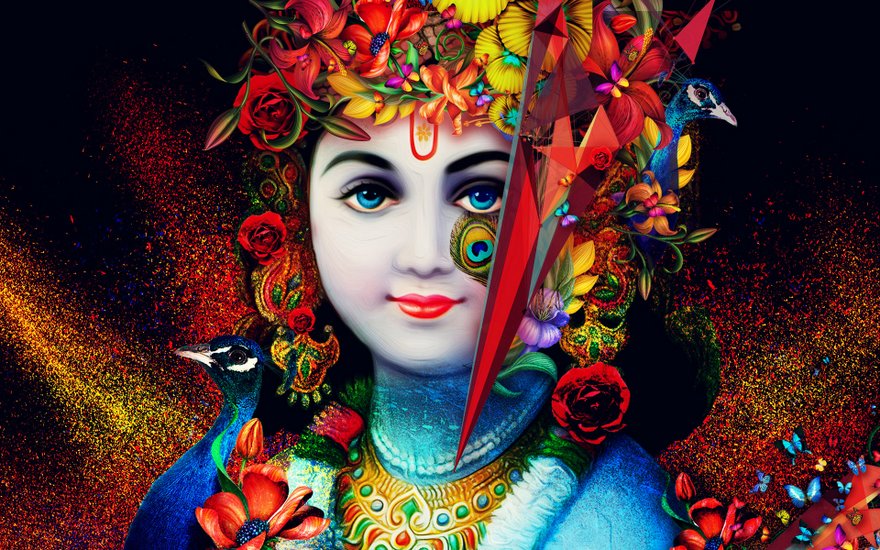 Why is Krishna blue? Why not red or yellow or any other color? Why is it that the Absolute Truth has a bluish complexion? It would be best to get some sastric (scriptural) references.

since it is one of these questions that somehow reappears, specifically requesting scriptural references, here are a few. The first was expressed already in the above-cited Answers. Note also that in the final reference cited below, in a lecture of 1975 Srila Prabhupada offers the exact same explanation as you will find in the previous answers (cited above) to explain the word ‘blackish’, or ‘krishna’.

As for the reason behind Krishna’s having a bluish complexion, here is a very beautiful explanation given in Krishna Bhakti Ratna Prakasa by Raghava Gosvami wherein it is said:

Translation: At this point some may ask: “Why is it that the form of the Personality of Godhead, which He manifests only by His own wish, and which is made of the sweetness of transcendental pastimes, is famous everywhere for its dark complexion?”

Part of the answer to this question may be found in the statement of the Sruti-sastra: “No one can understand even a drop of the Lord’s transcendental form.” Aside from this it is also said: “He eternally manifests the color shyama, within which all colors rest. His complexion is not the material color black.” 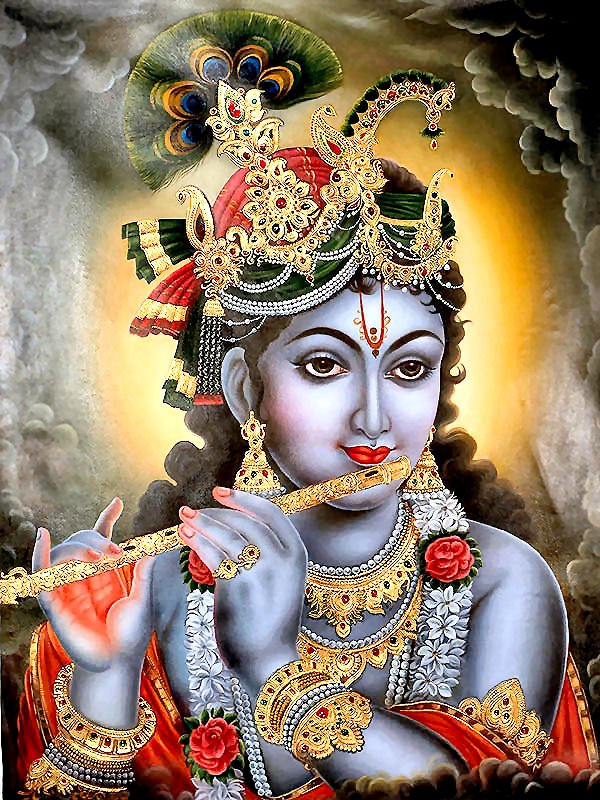 Thus from the last verse we see it says “sarva-varnah” which means that the colour shyama is a special color, which is like a composite of all colours. And we notice that if we combine all colours we get a colour which is blackish, but not black.

The color of the Personality of Godhead, Krishna, is described here as nilotpala-dala, meaning that it is like that of a lotus flower with petals tinted blue and white. People always ask why Krishna is blue. The color of the Lord has not been imagined by an artist. It is described in authoritative scripture. In the Brahma-samhita also, the color of Krishna’s body is compared to that of a bluish cloud.

The color of the Lord is not poetical imagination. There are authoritative descriptions in the Brahma-samhita, Srimad-Bhagavatam, Bhagavad-gita and many of the puranas of the Lord’s body, His weapons and all other paraphernalia. The Lord’s appearance is described here as padma-garbharuneksanam. His eyes resemble the inside of a lotus flower, and in His four hands He holds the four symbols: conchshell, discus, mace and lotus.

Your son Krishna appears as an incarnation in every millennium. In the past, He assumed three different colors-white, red and yellow-and now He has appeared in a blackish color. [In another Dvapara-yuga, He appeared (as Lord Ramacandra) in the color of suka, a parrot.] All such incarnations have now assembled in Krishna. 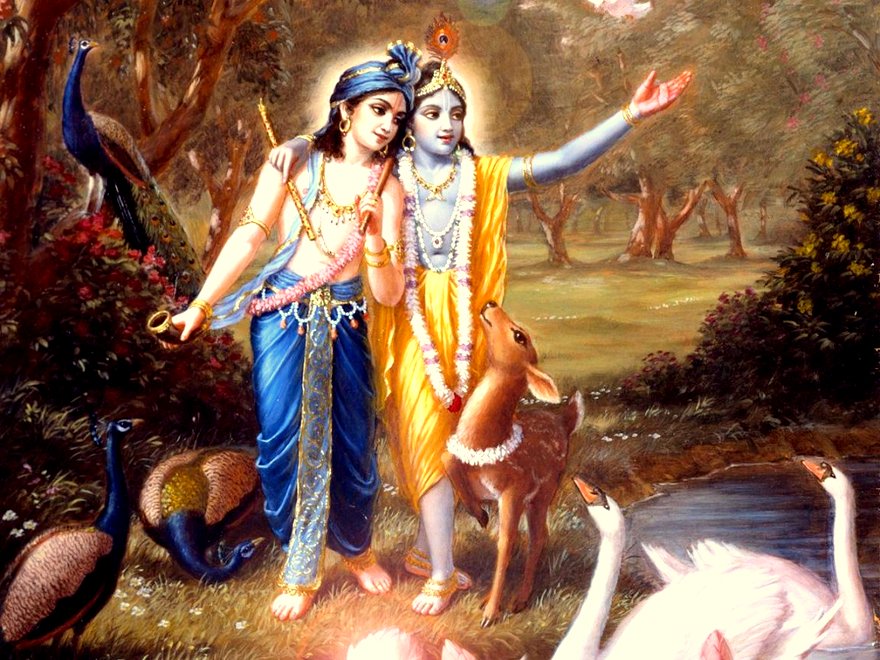 In the age of Kali, intelligent persons perform congregational chanting to worship the incarnation of Godhead who constantly sings the names of Krishna. Although His complexion is not blackish, He is Krishna Himself. He is accompanied by His associates, servants, weapons and confidential companions.

Just like brahmana-varna, ksatriya-varna. So in that way krishna-varna means He is Krishna, in the category of Krishna. Either you take this meaning or that meaning, krishna-varnam. But Krishna is black, and He is tvisa, by the complexion, akrishna. Akrishna means not Krishna. Now, there are so many colors. So everything is akrishna. That color, all the colors are mixed together, it becomes black. 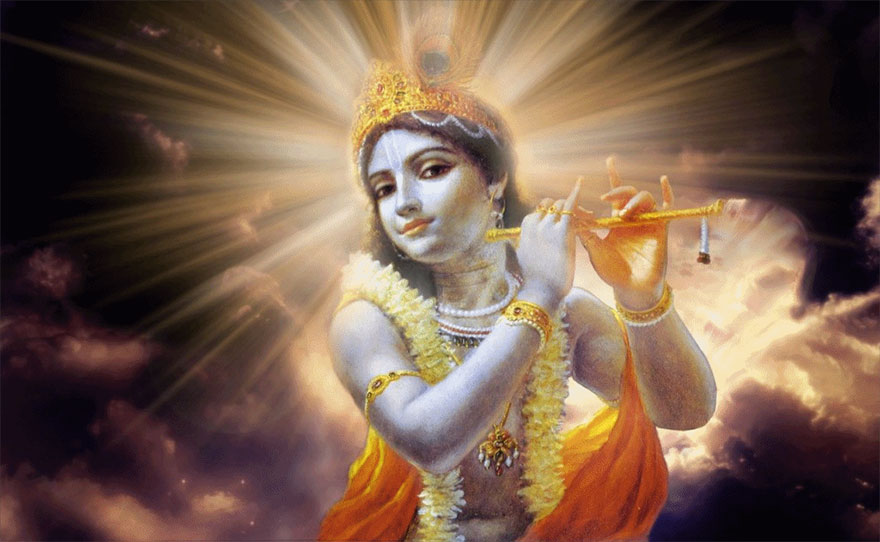 Otherwise there are many different colors. So akrishna means different color, “not krishna,” not black. So what is the actual? That we have to refer to sastra again, that Krishna, in how many categories of color He appears? That is stated in the Bhagavatam. When Krishna was born, then Gargamuni was calculating about His horoscope, and he said to Nanda Maharaja that “This, your child…” Idanim krishnatam gatah. Suklo raktas tatha pita idanim krishnatam gatah.

“Your child had formerly white color.” White color… Sometimes some critics criticize us that “Krishna everywhere He is black. Why in your temple white?” But it is said that sukla, suklo raktas tatha pita idanim krishnatam gatah: “Your son had other colors also, white and red and yellow, and now He has assumed blackish color.”