The Divine Weapons of the Puranas 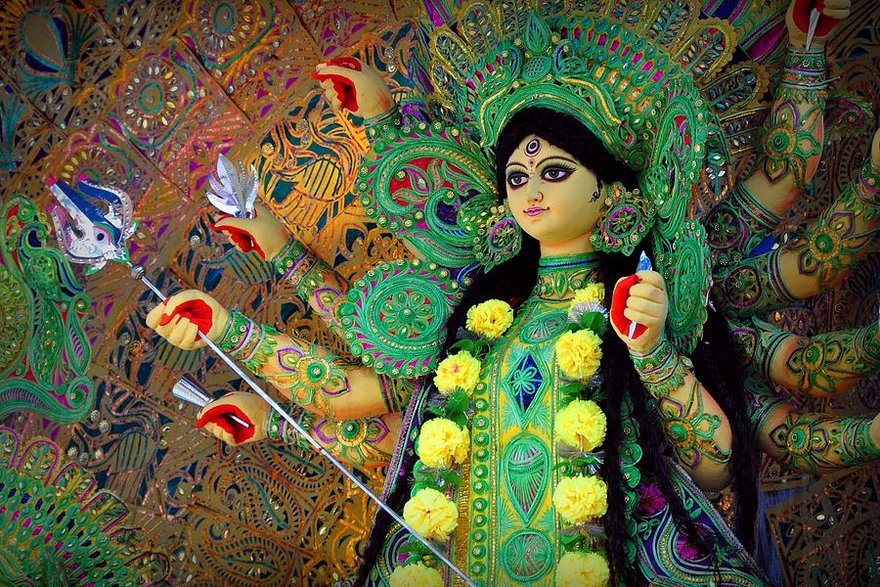 Astra is a general term that refers to celestial weapons in Hinduism. The astras are transcendental, supernatural weapons created by the Lord, and presided over by a specific Deity. In order to summon or use an astra, one must have the required knowledge, i.e., the specific mantra that will arm, direct, and disarm the astra.

The presiding deity, once properly invoked, endows the weapon, making it essentially impossible for foes to counter its potency through regular means. As described in sastra, specific conditions existed involving the usage of various astras, and the violation of proper protocol could be fatal. Because of the power involved, the knowledge involving use of an astra was passed from guru to disciple by word of mouth alone, and only the most qualified students were made privy to the information. Certain astras had to be handed down directly from the presiding deity himself, as having knowledge of the mantras alone was insufficient.

The importance of astras is described in particular detail in the Ramayana and Mahabharata, which describes their use in epic battles. Various pastimes describe the use of astras by archers such as Rama, Arjuna, and Bhisma. They generally invoked the astras into arrows, although they could potentially be used with anything. For example, Ashwatthama invoked an astra using a blade of grass as his weapon.

Following are the primary astras mentioned in Ramayana and Mahabharata:

Presiding Deity: Indra, the god of weather
Weapon’s Effect: Would bring about a shower of arrows from the sky.
Counter Weapon: Antardhana Astra – illusion weapon with several functions. This weapon affected the mind of the opponent and caused things to disappear from his field of vision. It also dispelled illusions caused by other astras.

Presiding Deity: Varuna, the god of water
Weapon’s Effect: The weapon discharged would release torrential volumes of water. This weapon is commonly mentioned as used to counter the Agneyastra. 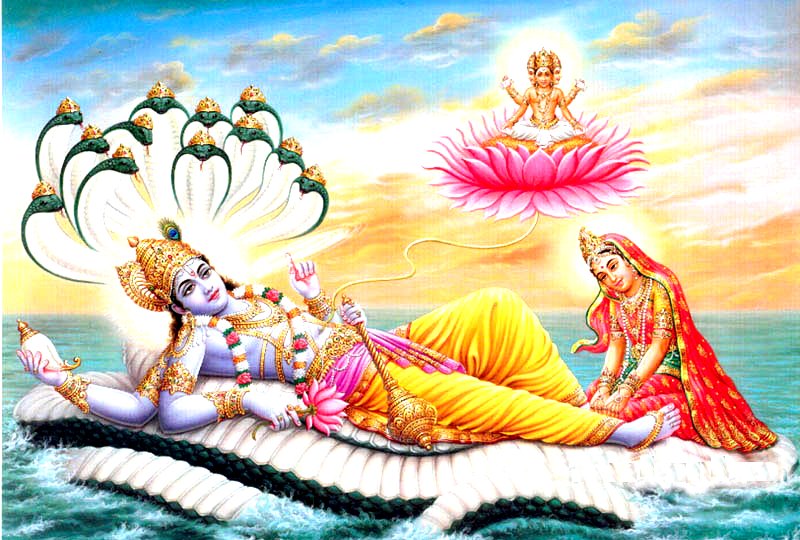 Presiding Deity: The Nagas
Weapon’s Effect: The weapon would have an un-erring aim and take on the form of a snake, proving deadly upon impact.
Counter Weapon: Garuda Astra – as the natural enemy of the Naga, Garuda astra was designed to break Naga astra in flight.

Presiding Deity: The Nagas
Weapon’s Effect: Upon impact, this weapon would bind the target in coils of living venomous snakes. In the Ramayana, it was used against Lord Rama and Lakshmana by Indrajit.

Presiding Deity: Vayu, the god of wind
Weapon’s Effect: Bring about a gale capable of lifting armies off the ground. 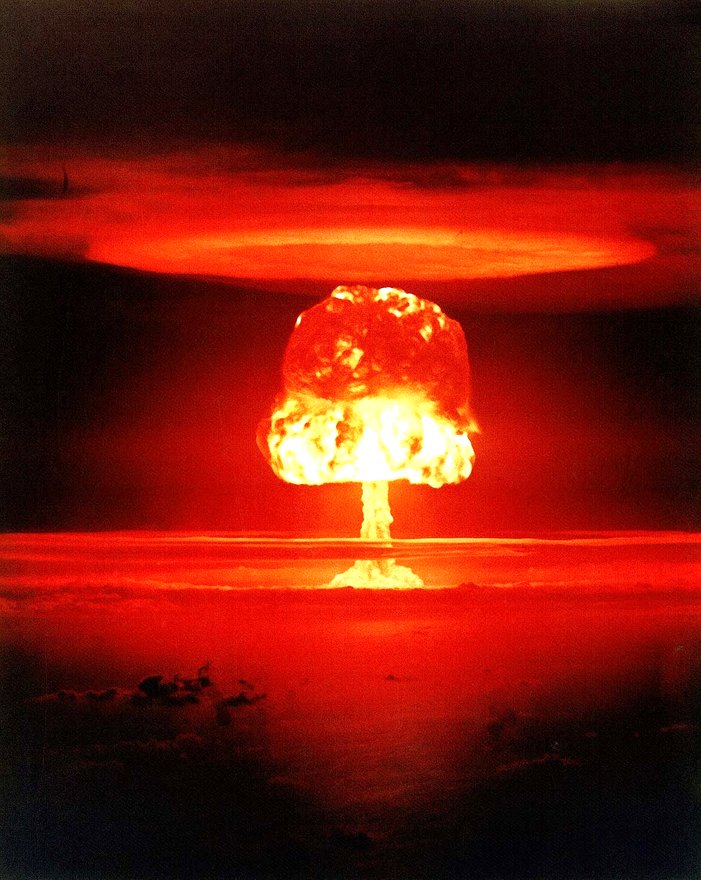 Presiding Deity: Surya, the sun god
Weapon’s Effect: Create a dazzling light that would dispel any darkness about.

Presiding Deity: Twashtri, the heavenly builder
Weapon’s Effect: When used against a group of opponents (such as an army), would cause them to mistake each other for enemies and fight each other.

Weapon’s Effect: Would cause entire hosts/armies to collapse in a trance. It is described as a weapon that can deprive warriors of their senses.
Counter Weapon: Prajna Astra – weapon that revitalized the mind and restored senses. In Mahabharata it is sometimes mentioned as Pragna Astra.

Weapon’s Effect: Would cause a Parvata/mountain to fall on the target from the skies.

Presiding Deity: Brahma, the Creator
Weapon’s Effect: Would destroy entire hosts at once. Could also counter most other astras.
Considered the most deadliest weapon of all, there was no anecdote for Brahma Astra. 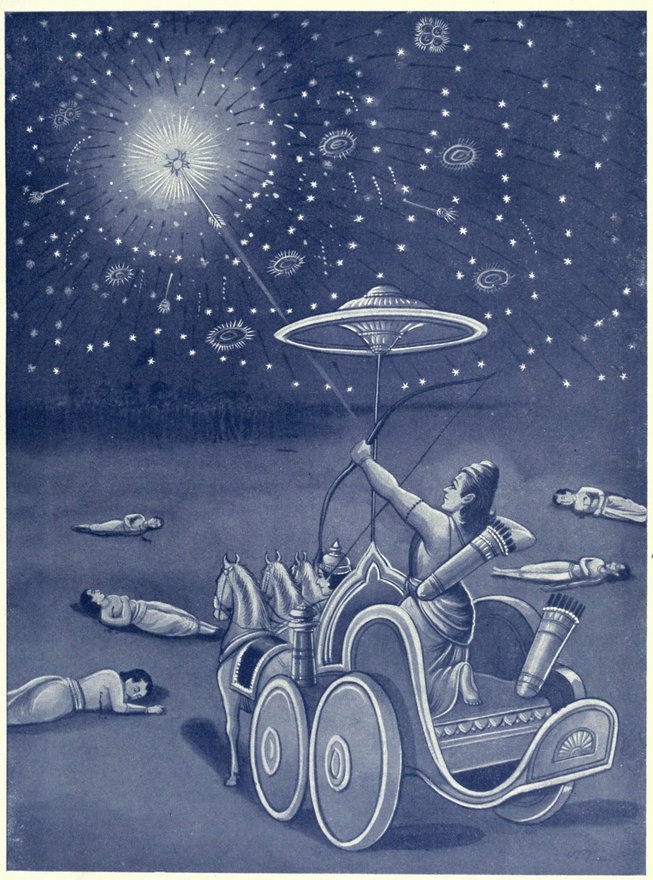 Presiding Deity: Brahma, the Creator
Weapon’s Effect: Capable of killing devas. It was used by Ashwatthama on Parikshit.

Presiding Deity: Vishnu, the Preserver
Weapon’s Effect: Would create showers of arrows and discs. The astra’s power would increase with the resistance offered to it. This weapon had to be obtained from Vishnu directly, and could be used only once. If it was invoked twice in the same battle, the astra was said to shower arrows on the invoker’s own army.

Presiding Deity: Visnu, the Preserver
Weapon’s Effect: Would destroy target completely, irrespective of target’s nature. Infallible. This weapon had to be obtained from Vishnu directly. 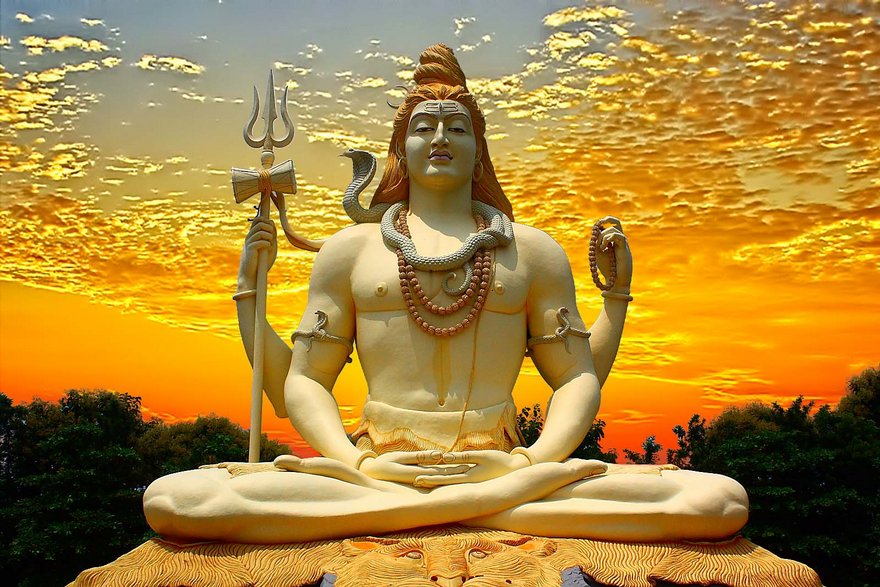 Presiding Deity: Shiva, the Destroyer
Weapon’s Effect: One of the most famous and infallible astra, it would destroy the target completely, irrespective of target’s nature. This weapon had to be obtained from Shiva directly.

Brahma Astra is one of the most powerful celestial weapons in Hindu mythology. It is typically associated with Lord Brahma the Creator, but there is no textual evidence that he actually used the weapon and he rarely takes destructive actions in Hindu mythology. It is more likely that “Brahma” in this context refers to “to expand, grow, swell, or enlarge” and therefore Brahma Astra refers to an expanding celestial weapon of immense destruction.

Brahma Astra can be obtained only through intense meditation and accumulation of ascetic merit. A worthy individual receives a mantra to invoke the weapon, and the Brahma Astra can only be used once in a lifetime unless the wielder knows a separate mantra to withdraw it. Discharging the weapon requires intense mental discipline and concentration and must be used against a worthy individual or army. Improper use of the weapon, either against a weak individual or without specific intent could cause the destruction of the entire universe. When used properly, the Brahma Astra is a counter to most other astras while at the same time there is no defense or counter to it; the target of this weapon will be completely annihilated.

Anecdotal evidence also indicates that the Brahma Astra causes environmental damage on a massive scale. The land on which the weapon is used becomes barren and cracked, all life withers and dies in the surrounding area and not even rain will fall, causing drought-like conditions. It is also said that men and women near the vicinity of the blast become infertile. In modern times the Brahma Astra has been compared to a nuclear device but based on the description, it is far more powerful. While the entire stockpile of nuclear weapons could at best destroy the world, the Brahma Astra is capable of destroying the entire universe (again, only when used improperly).

The Brahma Astra has been invoked several times in literature. In the Ramayana, Rama uses the Brahma Astra to deal the final blow against the rakshasa Ravana during their battle on the island of Lanka. Bharata tried to use the Brahma Astra against Lava and Kusa, but they both fired their Brahma Astras first, killing him and most of his army. In the Mahabharata, Pradyumna used the Brahma Astra on Salwa, but he survived.

As described in the sastra, a Brahmastra is an astra, or celestial weapon created by Lord Brahma. It is sometimes known as the Brahma Astra (astra referring to ‘missile weapon’). As described in a number of the Puranas, Brahmastra is considered to be the very deadliest of weapons. When a Brahmastra is discharged, neither a counterattack nor a defense of any kind can stop it.

The Brahmastra never misses its mark and must be used with very specific intent against an enemy, whether an individual or army, as the target will face complete annihilation. Brahmastra is said to be obtained by meditating on Lord Brahma, and can be used only once in a lifetime. The user would have to display immense amounts of mental concentration in order to get sanction to arm and use the weapon. Since Brahma is the Creator in Sanatana Dharma, it is understood that Brahmastra was created by him for the purpose of upholding Dharma and Satya.
According to sastra, the Brahmastra is invoked by a key mantra that is bestowed upon the user when he is given the weapon. By properly chanting the mantra, the user can call upon the weapon and deploy it with annhiliative force against his adversary.

The Brahmastra also causes severe environmental damage. The land where the weapon is used becomes barren for eons, and all life in and around that area ceases to exist. Women and men become infertile. There is severe decrease in rainfall and the land develops cracks, like in a drought.

Of these Astras, the Following Were Considered the Most Deadliest:

The Forgetfulness of the Humanists