Why Copper Was Used by Our Ancestors 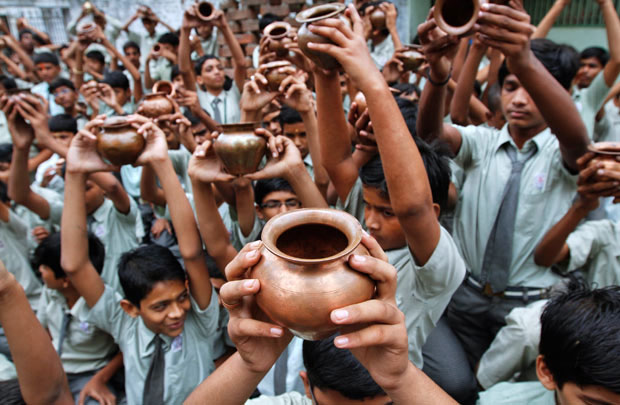 Copper can destroy undesirable virus and bacteria. It is interesting that Ayurveda knew this, when bacteria were unknown to science. Ayurveda recommends storing water in copper vessels. Ancient Egyptians used copper vessels to keep water fresh.

Even today, management of Siva temple at Rameswaram uses large sized Copper vessels to store water brought from river Ganges to offer to lord Siva. Water, stored thus, stays fresh for years together. According to scientists, copper vessel can be the answer to kill the `E-Coli’ bacteria which causes food poisoning.

British scientists are carrying out research on copper and concluded that copper ions kill these harmful bacteria, a capability not found in any other metals including gold. It is interesting to see that a research group from Southampton University found that Coli 157 bacteria can live happily in stainless steel vessels for months together, while copper vessel at room temperature can kill them in just four hours. At 20 deg centigrade, in the stainless steel vessel, those bacteria live for 34 days, while in brass vessel they live for 4 days.

Thus if one uses copper vessels for storing water in factories, shops, hospitals, restaurants, we can get rid of the risk of these food poisoning bacteria. Though stainless steel is much used for its shine and cleanliness, the copper is more useful material for vessels.

The advantages of drinking copper water was pointed out by Andrew Saul, Contributing Editor for the Journal of Orthomolecular Medicine, while speaking on fertility, conception and family planning. In his own words, – “If you want to conceive, try having the man take mega doses of vitamin C for a few weeks prior. At least 6,000 milligrams a day, and as much as 20,000 mg/day guarantees very high sperm production. Divide the dose throughout the day for maximum effect. And that effect is what, exactly? More sperm, stronger sperm, and better swimming sperm all occurred, at even lower daily C doses”, in a University of Texas.

Copper must be balanced with zinc and a high doses of zinc can produce a copper deficiency, and sometimes a copper deficiency anemia which can be easily corrected. Many older American houses still have copper water pipes in their homes. Drink a glass or two of cold water first out of the tap every morning and you’ll get copper. Consuming more raisins and other copper-high foods is an excellent way of getting a natural dose. You can also take a multiple vitamin tablet that has copper in it. Or you can can simply buy a copper metal cup, fill it with cold water at bedtime, and drink it first thing the next morning, just like the ancient Indians did in the past. It is also seen that copper water becomes “sharp” and gets readily absorbed by our body, reaches cells in about 45 minutes. Hence, it is generally recommended that after Ushapan (drinking water in morning), one should give a gap of 45 minutes before consuming tea or coffee. Copper water is also recommended to people suffering from vitiligo, where it helps formation of melanin.

However, just like anything else, excess of copper in the human body can be detrimental to health as well. Pregnant and lactating mothers should limit their consumption of copper and an adult should not take a dose of more than 10mg daily if consuming in a tablet form.

After starting on copper water, many do not need cold water to satisfy the thirst. With yoga, pranayama and other breathing techniques, senses become so sharp that taste and quality of water can be sensed adequately. Though copper water is slightly ionic, it does not cause gastric acidity to increase. On the other hand, due to increased Agni and digestion, acidity reduces.

Ancient Indians used to throw copper coins in rivers, lakes, ponds and wells. Today’s generation, without thinking of the meaning behind this act, are ignorantly throwing nickel, aluminium coins into rivers, which is of no use and in fact detrimental to the environment.

The idea behind throwing coins into water is not about the blind faith of river worship but to kill the harmful bacteria in water with copper (copper coins were used in ancient past) and this purified water would be useful for fish and other living beings within the water and the humans and animals drinking it would remain healthy.

Some countries like USA still use copper to make pennies which can also be thoroughly cleaned first and dipped in a vessel overnight to purify water naturally.

Copper used in Yantras and Bracelets

Ancient seers in India have recognized that copper conducts heat and energy. So, they made yantras on thin copper plates with mysterious geometrical patterns. Before copper, palm leaves were used but later it was discovered that Copper is efficient conductor and lasts much longer. Since more than 2000 years, copper usage has become an integral part of Indian lifestyle. 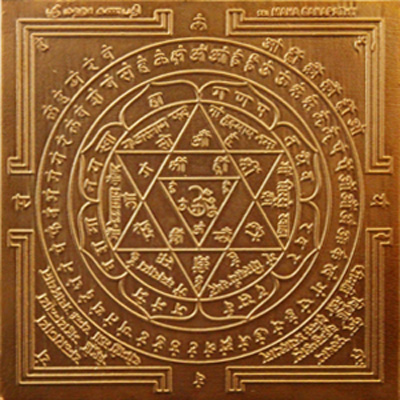 Also according to Mantra Sastra, Mars (Mangal/Kuja) controls this science of mantras, yantras etc and the metal related to this planet is Copper. If someone suffers from excess heat in body due to mars in their horoscope, it is advised to wear a copper bangle/bracelet on active hand’s wrist. This helps them balance the body temperature as they start sweating during the day and green color layer, similar to copper-carbonate or verdigris (washable) forms on the skin where copper bracelet touches it. They should also drink copper vessel stores water everyday.

Copper is known for its property of synthesizing phospholipids which help in formation of nerve coating (myelin). This prevents from seizures to occur and acts as Brain Stimulant.

Copper is a known anti-oxidant and anti-carcinogenic agent which helps in slowing down the ageing process by preventing cell damage. It is also used in treatment of cancer these days.

Why not start with replacing those stainless steel utensils you have in the kitchen today and replace them with copper ones instead and see the difference for yourself?