Death: A Process of Growth 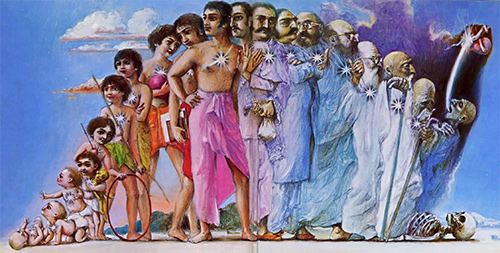 In society today there is much talk of death and dying because of the premature loss of life due to crime, cancer, AIDS, and the increase in suicide, famine and wars. Recent topics such as living wills and euthanasia also have brought the subject of death and dying more to our attention. Even though many people are uncomfortable talking about death, especially their own of that of someone close, it is one experience of our lives we know will occur with certainty. The least certain is the time when it will happen. Because of this utter uncertainty about the time of death, we need to be prepared for it at all times.

Anyone researching the literature on death & dying finds an array of books and articles. Valuable as these numerous studies have been in shaping compassionate social attitudes toward the fatally ill and in clarifying our ways of thinking about our own life and death, most of them lack a spiritual dimension — practical guidance in what may be called the “art” of dying.

Death is a subject we try to conceal, deny and bury, but death does not go away. In times past when people died amid familiar surroundings, the sight of death was not uncommon. There were no “old people homes”, die of one ailment or another. The full cycle of life was more visible, birth, growth, sickness aging and death. Today, technological development has brought dehumanisation and alienation to the dying person. It is almost impossible for anyone to hear of say any last words. New drugs appear to keep people alive longer and kill the pain but they can also diminish the consciousness, making communication very difficult.

Now, people die in the alien world of the modern medical hospital or among strangers in a nursing home, who are dealing with the fear of death themselves. Contemporary medicine’s approach to the dying seems to be dominated by a determined effort to conquer death and delay its advent at all cost.

In refusing to face death, we close off a part of life. There is an interesting tendency in Western thinking to dissociate death from life. In Western thinking, the answer to the problem of death is to try to conquer it or postpone its arrival as long as possible, whereas, in ancient and non-western cultures, there is the recognition of the utmost importance of dying as an integral aspect of life. In these cultures, the theme of death has had a deep influence on religion, ritual, life, mythology, and philosophy. For ancient cultures, dying is sometimes seen as a step up in the spiritual hierarchy, a promotion into the world of revered ancestors, powerful spirits or as an upward transition from the complicated earthly life fraught with suffering and problems.

We need to examine the meaning of human life. Ancient scriptures tell us that human life is meant for reviving one’s eternal relationship with the Lord. All religious injunctions are meant for awakening is brought about, the quicker the mission of human life is fulfilled. The awakening occurs by processes. The process of expressing life is growth. The process of dying is growth also. From the time we enter this world, we are in a process of growth – – physically, mentally, emotionally and spiritually. In order for these growth processes to occur we must “die” a little. The dying has to occur in order to live. What is that dying? To die means there are things we put behind us. Things we have to kill out of our system. As we grow, we die to the life chosen by family, society, friends and the media. To grow, we must continuously die and be reborn at another stage, in the same way a caterpillar becomes a butterfly.

From the first moment at birth until our last breath at death we go through six changes as does everything on this material earth: birth, growth, maintenance, disease, old age, death. Some examples of growth processes, are graduation from school and finding work, getting into or out of relationships, losing one’s job, moving to a new location, or starting a new profession. Whatever the situation, it is one of growth, yet it is filled with anxiety and fraught with a sense of danger. But it is also filled with excitement as well as joy.

Moving through any of the examples given, we may recognize certain stages we go through which are similar to the stages of dying given by Dr Elizabeth Kubler-Ross in her book Death and Dying. Her work with the terminally ill has helped many people to deal with the dying process. She describes the stages of dying as denial, rage/anger, bargaining, depression and acceptance. Haven’t you had those feelings when a relationship is breaking up? When moving to another location due to loss of a job? When divorcing a partner of many years of when someone you love dies? Aren’t those feelings there? All are a part of our life experiences yet are part of a “dying” experience also. We die to lod ways of thinking, to doubt and fears and we are reborn to live life more fully. These “dying” experiences continue until the final growth experience occurs, the death of the physical body when the eternal soul is freed to return to the Lord. Hopefully.

Life and death are not demarcated. They are not conditions existing independent of each other. They re merely facets of one natural process (growth) both present at any given time. It is the denial of death, as a part of the process, that is partially responsible for people living empty, purposeless lives. When you live as if you will live forever it becomes to easy to postpone the things you must do. Most people live their lives in preparation for tomorrow of in remembering yesterday and meanwhile today is lost. But if you live each day as if it could be your last, then you could use each day to grow because each day we are in the dying process preparing for the final growth process – – death.

To understand these processes, we need to have a strong belief system – religious, spiritual and /or philosophical that teaches us who we are, the purpose of life, and where we go after death. We must have some understanding of who or what dies. Most people believe they are a body and a mind, and”I”, an ego identified by name, i.e “I am Jane from Boston”. “I am American”. “I am Black”.

A spiritual perspective includes the understanding that we are more than the body: we are spirit/soul in a body. Understanding this is the real preparation for the process of growth called death. This means remembering the real purpose of life. This really means developing a higher consciousness by which we perceive ourselves to be eternal.

In order to work with the concept of knowing who we are, we need to study and examine how ancient religions and spiritual and philosophical teachings describe death and an afterlife. You will find it is a more comforting explanation of the relationship between life and death than what is offered in many Western religions.

If we are to have true contentment we must free ourselves from the chain of birth and death. We need to gain knowledge of the self. To do this we go to books and teachers of higher knowledge. The oldest of these books of knowledge are the Vedas, original scriptures spoken by the Lord himself. The purpose of books of knowledge are to train us to understand our position as pure soul.

One such book i the Bhagavad-Gita As It Is by His Divine Grace A.C. Bhaktivedanta Swami Prabhupada, in which Krishna, the Supreme Lord, provides instructions on the nature of the self to His student Arjuna who is struck with terror by the task of slaying his kinsmen on the field of battle. Krishna tells Arjuna that, although the body perishes, the soul cannot be injured and does not die because it is eternal. Arjuna is informed that knowledge means to know the difference between matter and spirit and the controller of both. Knowledge is the preparation for facing the process of dying leading to the final process of growth – death. Christen tells Arena that “one who has taken birth is sure to die, and after death one is sure to take birth again…” That is until one engages in devotional service to the Supreme and moves toward ending the cycle of birth and death. Ending the cycle of birth and death means remembering that we are part and parcel of the Supreme Lord, controlling the mind and senses and moving beyond the pull of the material world, to return to the spiritual would, our true home.

Unfortunately, much of modern society, feels that death is the greatest of human misfortunes and that dying is the final agonizing struggle against extinction. Just as people are afraid of heights, the dark, deep water, the future of the unknown. Many try to relieve their anxiety by more and more self gratification. But death does not forget about us. Therefore we should always remember the real purpose of life and that life is nothing but a moment on our path to ward self-realization.

Srila Prabhupada’s message of self-realization to this Western world is in essence that we are not the body. We are spirit/soul, part and parcel of the Lord. He stressed that it is not simply a matter of saying “I am not the body”, but of actually realizing it. Until we truly understand that, we will continue in the cycle of birth and death. But we are not left to figure out how to do this. We are given a wonderful process; chant the Names of the Lord and engage in devotional service to the Lord. We will then be less fearful about death and more fulfilled about life.

Ayurveda-vedanta: The Vedanta of Life Science

Ayurvedic Rasayana (The System of Rejuvenation)