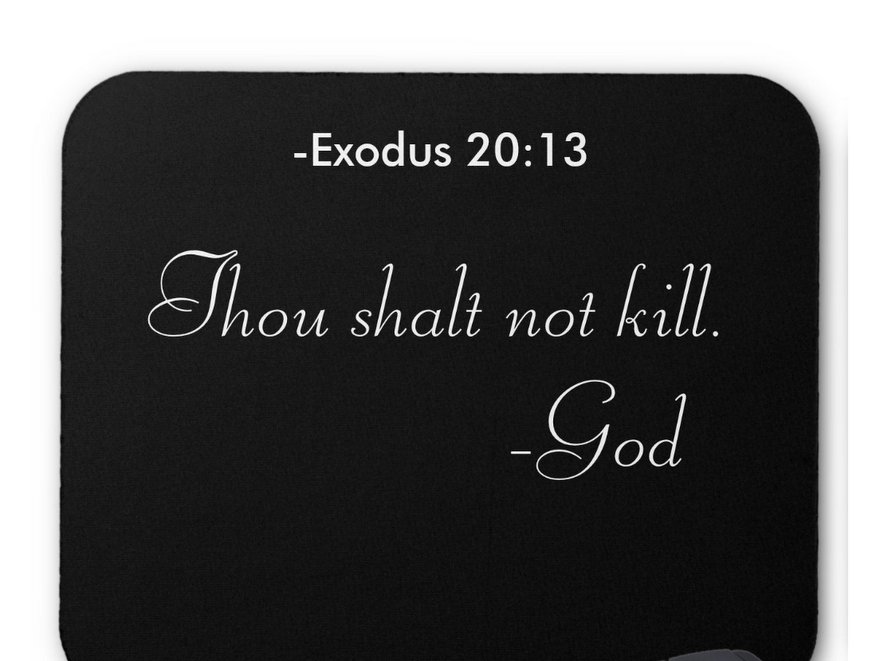 The Bible does not simply say, ‘Do not kill the human being.’ It says broadly, ‘Thou shalt not kill.’… why do you interpret this to suit your own convenience? At a monastic retreat near Paris, in July of 1973, Srila Prabhupada talked with Cardinal Jean Danielou.

Srila Prabhupada: Jesus Christ said, “Thou shalt not kill.” So why is it that the Christian people are engaged in animal killing?

Srila Prabhupada: But the Bible does not simply say, “Do not kill the human being.” It says broadly, “Thou shalt not kill.”

Cardinal Danielou: We believe that only human life is sacred.

Srila Prabhupada: That is your interpretation. The commandment is “Thou shalt not kill.”

Cardinal Danielou: It is necessary for man to kill animals in order to have food to eat.

Srila Prabhupada: No. Human beings are meant to eat vegetarian food. The tiger does not come to eat your fruits. His prescribed food is animal flesh. But man’s food is vegetables, fruits, grains, and milk products. So how can you say that animal killing is not a sin?

Cardinal Danielou: We believe it is a question of motivation. If the killing of an animal is for giving food to the hungry, then it is justified.

Srila Prabhupada: But consider the cow: we drink her milk; therefore, she is our mother. Do you agree?

Srila Prabhupada: So if the cow is your mother, how can you support killing her? You take the milk from her, and when she’s old and cannot give you milk, you cut her throat. Is that a very humane proposal? In India those who are meat-eaters are advised to kill some lower animals like goats, pigs, or even buffalo. But cow killing is the greatest sin. In preaching Krishna consciousness we ask people not to eat any kind of meat, and my disciples strictly follow this principle. But if, under certain circumstances, others are obliged to eat meat, then they should eat the flesh of some lower animal. Don’t kill cows. It is the greatest sin. And as long as a man is sinful, he cannot understand God. The human being’s main business is to understand God and to love Him. But if you remain sinful, you will never be able to understand God—what to speak of loving Him.

Cardinal Danielou: I think that perhaps this is not an essential point. The important thing is to love God. The practical commandments can vary from one religion to the next.

Srila Prabhupada: So, in the Bible God’s practical commandment is that you cannot kill; therefore killing cows is a sin for you.

Cardinal Danielou: God says to the Indians that killing is not good, and he says to the Jews that…

Srila Prabhupada: No, no. Jesus Christ taught, “Thou shalt not kill.” Why do you interpret this to suit your own convenience?

Cardinal Danielou: But Jesus allowed the sacrifice of the Paschal Lamb.

Srila Prabhupada: But he never maintained a slaughterhouse.

Cardinal Danielou: [Laughs.] No, but he did eat meat.

Srila Prabhupada: When there is no other food, someone may eat meat in order to keep from starving. That is another thing. But it is most sinful to regularly maintain slaughterhouses just to satisfy your tongue. Actually, you will not even have a human society until this cruel practice of maintaining slaughterhouses is stopped. And although animal killing may sometimes be necessary for survival, at least the mother animal, the cow, should not be killed. That is simply human decency. In the Krishna consciousness movement our practice is that we don’t allow the killing of any animals. Krishna says, patram puspam phalam toyam yo me bhaktya prayacchati: “Vegetables, fruits, milk, and grains should be offered to Me in devotion.” (Bhagavad-Gita 9.26) We take only the remnants of Krishna’s food (prasadam). The trees offer us many varieties of fruits, but the trees are not killed. Of course, one living entity is food for another living entity, but that does not mean you can kill your mother for food. Cows are innocent; they give us milk. You take their milk—and then kill them in the slaughterhouse. This is sinful.

Student: Srila Prabhupada, Christianity’s sanction of meat-eating is based on the view that lower species of life do not have a soul like the human being’s.

Cardinal Danielou: We admit that in the animal there may be the same type of biological existence as in men, but there is no soul. We believe that the soul is a human soul.

Srila Prabhupada: Our Bhagavad-Gita says sarva-yonisu, “In all species of life the soul exists.” The body is like a suit of clothes. You have black clothes; I am dressed in saffron clothes. But within the dress you are a human being, and I am also a human being. Similarly, the bodies of the different species are just like different types of dress. There are soul, a part and parcel of God. Suppose a man has two sons, not equally meritorious. One may be a Supreme Court judge and the other may be a common laborer, but the father claims both as his sons. He does not make the distinction that the son who is a judge is very important and the worker-son is not important. And if the judge-son says, “My dear father, your other son is useless; let me cut him up and eat him,” will the father allow this?

Cardinal Danielou: Certainly not, but the idea that all life is part of the life of God is difficult for us to admit. There is a great difference between human life and animal life.

Srila Prabhupada: That difference is due to the development of consciousness. In the human body there is developed consciousness. Even a tree has a soul, but a tree’s consciousness is not very developed. If you cut a tree it does not resist. Actually, it does resist, but only to a very small degree. There is a scientist named Jagadish Chandra Bose who has made a machine which shows that trees and plants are able to feel pain when they are cut. And we can see directly that when someone comes to kill an animal, it resists, it cries, it makes a horrible sound. So it is a matter of the development of consciousness. But the soul is there within all living beings.

Cardinal Danielou: But metaphysically, the life of man is sacred. Human beings think on a higher platform than the animals do.

Srila Prabhupada: What is that higher platform? The animal eats to maintain his body, and you also eat in order to maintain your body. The cow eats grass in the field, and the human being eats meat from a huge slaughterhouse full of modern machines. But just because you have big machines and a ghastly scene, while the animal simply eats grass, this does not mean that you are so advanced that only within your body is there a soul and that there is not a soul within the body of the animal. That is illogical. We can see that the basic characteristics are the same in the animal and the human being.

Cardinal Danielou: But only in human beings do we find a metaphysical search for the meaning of life.

Cardinal Danielou: But why does God create some animals who eat other animals? There is a fault in the creation, it seems.

Srila Prabhupada: It is not a fault. God is very kind. If you want to eat animals, then He’ll give you full facility. God will give you the body of a tiger in your next life so that you can eat flesh very freely. “Why are you maintaining slaughterhouses? I’ll give you fangs and claws. Now eat.” So the meat-eaters are awaiting such punishment. The animal-eaters become tigers, wolves, cats, and dogs in their next life—to get more facility.