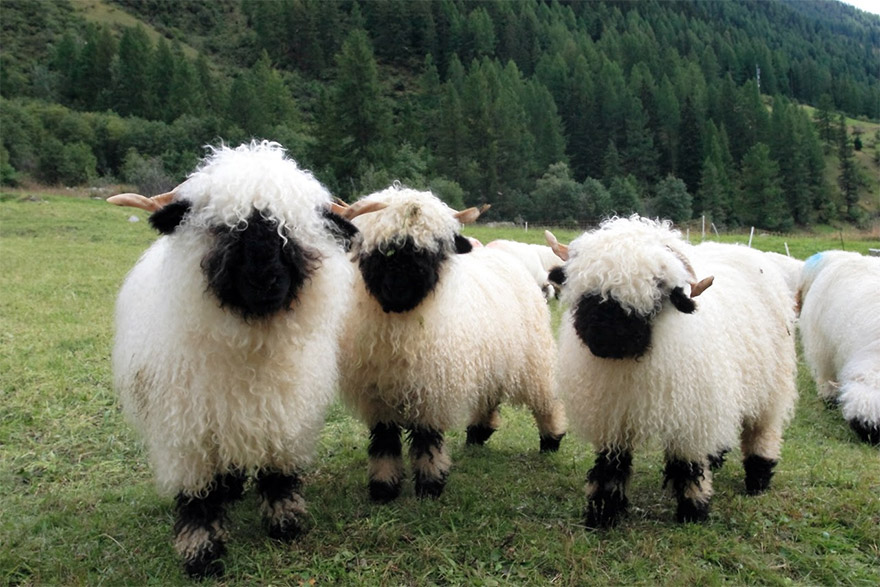 Answer- First question, are there references to eating meat in the Vedic literature?? Yes, there are. But these references are not recommendations. They are concessions. So there are references from Rig Veda, from Manu Samhita, from extensively from the Mahabharata and also from Srimad Bhagavatam; the Bhagavat Puran. So these four literature are considered to be ones which have influenced modern day Hinduism to a large extent. Rig Veda is considered by scholars to be oldest of all scriptures which is preserved even today in its letters. Manu Samhita is widely recognized as law book for Hinduism. Mahabharata is a veritable compendium of traditional dharma. And the Srimad Bhagavatam is considered to be the ripened fruit of the devotional essence of the Vedic literature.

So you will find that there are so many references that, if by example Manu Samhita says man should never obtain food that is got by injury to other living beings. Once we understand the disgusting origin of flesh and the cruelty of slaughtering and slaying other living beings, why should one eat meat at all. One should give it up entirely. So there are multiple references here. He who permits the slaughter of animal, he who cuts it up, he who kills it, he who buy or sells meat, he who cooks it, he who serves it up, he who eats it, must all be considered the slaves of the animals. 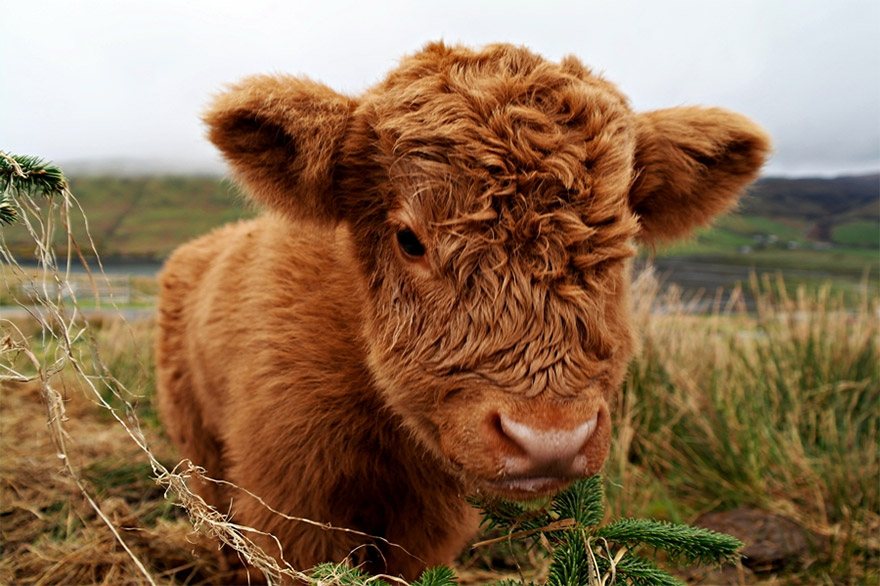 There is no greater sin on that man who though not worshiping the God or ancestor seeks to increase the bulk of his own flesh by the flesh of others, Manu Samhita 5.51-52. Further Bhishma Pitamah specially Anushasan parva, when he is instructing Yudhisthir Maharaja in the Mahabharata extensively recommends vegetarian food. So you can have a look at these references yourself. But coming to the important point, these references do exist. Some people who want to justify their meat eating habits may find out some references which also allow meat eating. If we look at those references practically all of them are in the context of Yagyam or sacrifice. So in the verse which I read out in Manu Samhita also, it is said that if one is sacrificing for the God’s then and then alone meat is allowed. Killing animal is allowed and then the meat can under certain circumstances be consumed. 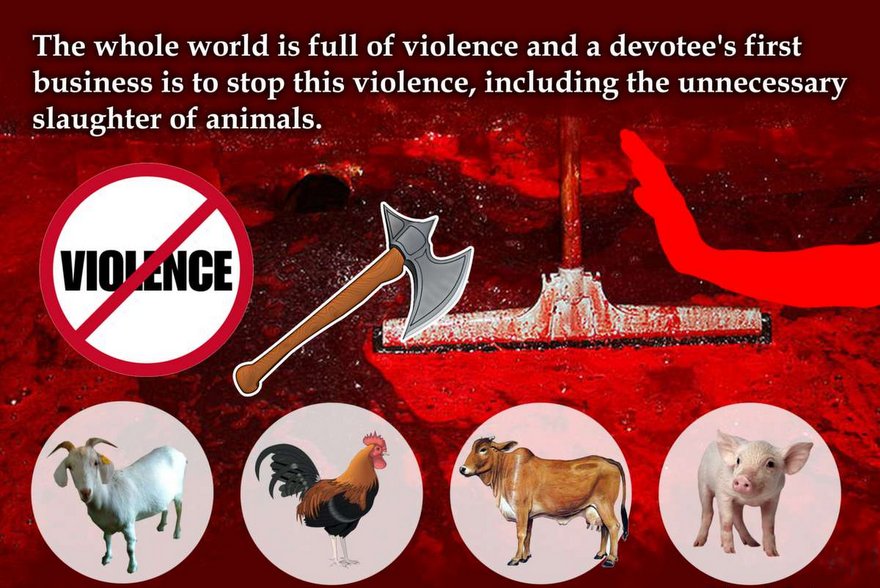 Why was this sort of statement given in the Vedic literature? The Vedic literature are not just offering spirituality in one form. The spiritual processes offered in the Vedic literature are not uniform but omniform. Uniform means it is only one form, for example we had the religions. Jesus is the only way. Follow Jesus and you will go back to God otherwise you are going to hell. Mohammad is the zeal of all prophets. If you don’t follow Mohammad you are going to go to hell. So this is only one way path. The Vedic literature don’t talk about only this way or hell otherwise, my way or the highway. The Vedic literature recognize that different people have different levels of adhikar. Adhikar means, capacity to practice spiritual life. And based on their individual capacities they can follow recommendations at different levels. That is why for those who are addicted to meat eating, meat eating is allowed under certain restricted conditions. So these statements in the scriptures are concessions, not recommendations.

What is the difference between a concession and a recommendation? If a patient goes to a doctor, the doctor tells him you have diabetes. You take this medicine in morning and evening and you absolutely avoid all sugar. So among the two things the doctor had said the taking medicines is the recommendation. That’s what the doctor wants the patient to do. On the other part don’t take sugar. The patient said I can’t live without sugar. No, I can’t live without sugar. I must take sugar. Doctor is ok, you take sugar. Take one sweet once a week. Then the patient comes back and starts telling oh! The doctors has instructed me to take a sweet. Now that is not instruction. That is a not a recommendation, it is a concession. Concession means that what is not necessarily good for me but because I want it I am allowed to do it. Recommendation means I am told to do it.

So the Vedic literatures recommendation is be vegetarian but the concession is you can be non-vegetarian under certain circumstances. What are those circumstances? They are if we perform yagya in which the animal is sacrificed and then after that the animal is offered to Kali or some other devi or devata and then that food is taken that meat is consumed. So this creates certain restrictions. That only on the holy days related with the devi. Only when the proper yagya or proper worship and sacrifice is happening at that time the animal can be sacrificed. So just as the doctor’s purpose is to restrict the eating of the sugar. He would prefer, he would recommend not taking sugar at all. But if the patient is not capable of following that instruction, doctor recommends that you take the medicines regularly and he allowed as a concession to take sugar occasionally. 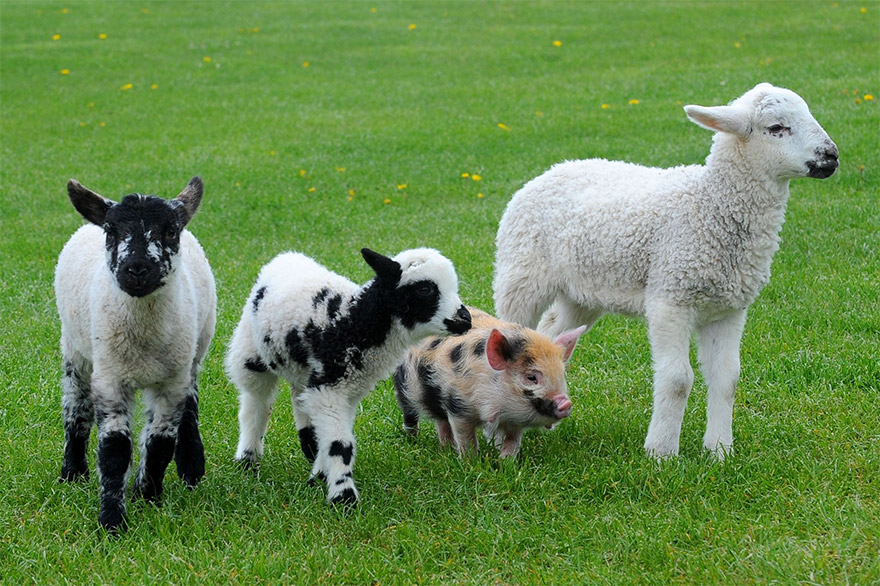 Now if the patient comes back home and starts telling, my doctor told me to take sugar. That’s his instruction. All of you had make arrangements for giving me sugar. And not only that, he not only misrepresents, the doctor did not recommend, doctor gave a concession but he says he changes it not once a week but every day. Not every day, every day morning, after noon evening doctor instructing him to take a sugar. That is not at all true. So in such a situation the doctor may come and tell that nothing doing, sugar should not be taken at all. Sugar is very harmful. Sugar should not be taken at all. And strongly he rejects. He realizes that the concessions that he had given were misused. And then he dispenses away with the concessions entirely. This is exactly what happened with Lord Buddha.

Now the acharyas in the Vedic tradition recognize Lord Buddha to be an avtar of the Lord, as he is mentioned in the Bhagavat Puran, as he is mentioned in Jaideva Goswami’s Geet Govinda and several others scriptures. But, when Lord Buddha came he rejected the Vedic literature because people were misusing there concessions for meat eating and converting them into licenses and justifications for meat eating. So Buddha said I ahimsa paramo dharmo, no meat eating at all. And historically speaking Buddhism also attracted a lot of followers. And then because of the influence of Buddhism when to the natural human moral conscience, the obvious reality of the violence that is involved in killing animals and eating them, even in non sacrificial contexts became obvious then even the Hindu leaders reformed themselves and then they started emphasizing vegetarianism much more strongly. So people who were getting attracted to Buddhism, they were told if you think Buddhism is good because there is vegetarianism in it. 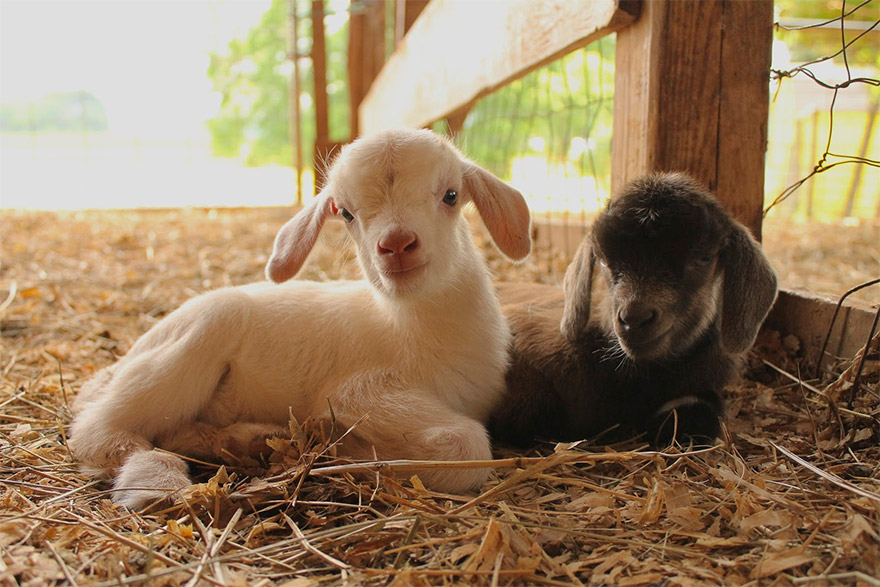 Now moving forward several of the acharyas starting from Shakaracharya, Ramanujacharya, Madhvacharya, these were three great systematizes of Hinduism. In fact from the fifth century B.C to fifth century A.D, Buddhism practically predominated India, and to some extent Jainism also in some parts of India. But from the seventh century onwards when Shankaracharya appeared, there was a great revival of Hinduism. So because still substantially there were people who were Hindus and they were saying that the Vedic literature tell us to eat meat so therefore we have to eat meat. Then the acharyas introduce some further modifications as this based also on the verse which I read out from Manu Samhita- That if at all you say that you have to sacrifice animals, make animals out of clay, make animals out of wheat flour. So if you have to sacrifice a goat, this is not exactly a invention of the acharyas. These references are there in the scriptures but they were brought to the fore front again. 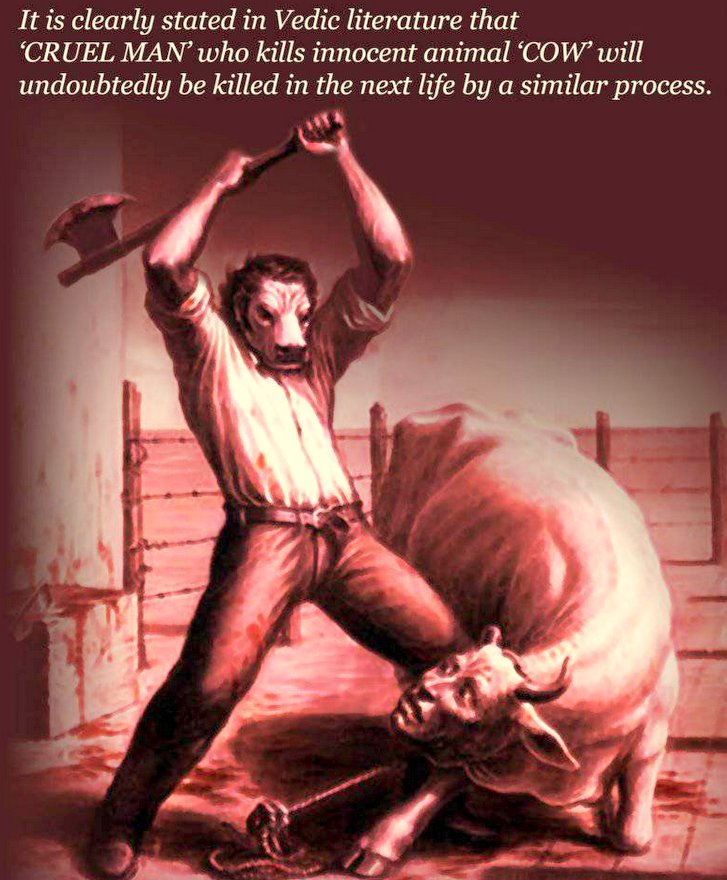 Those who started saying that how can you say that meat should not be eaten because the Vedic literature say that in yagya animals have to be sacrificed. So then the acharyas showed references, that indicated that one need not kill living animals. One can just make replica of animals using clay or specially wheat flower.

Similarly in the Kali temple instead of offering Her blood many temples now offer hibiscus flowers. So hibiscus is red in color. Blood is red in color. And Goddess certainly pleased by offering of the hibiscus flower also. Actually the Goddess never wants any meat or blood. But because the worshipers want it, to keep them under regulation, the sacrifices were originally started. Now in the original Vedic literature where are the animals cut and eaten? There are different kind of yagyas depending on the modes of the people who are involved. 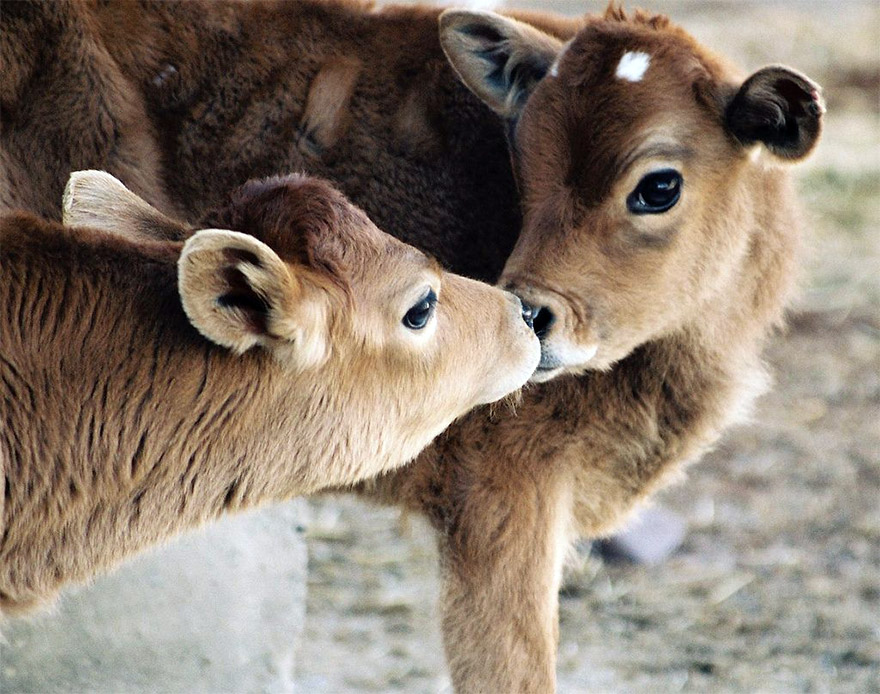 So the highest level of yagyas are, there if at all animals is used, the animal is put to death using the power of the mantra and then he gets the new body which everybody else sees and he gets the human body or a celestial body and he continues onward getting a jump start, getting a rapid leap forward in the evolution through the Vedic species. But in some other sacrifices, yes because the sacrifices were involving people who wanted to eat meat, so when the animal would be killed, the meat would be eaten also. This was for those people who are in rajo guna and specially in tamo guna, in the modes of passion and especially ignorance. But even these sort of sacrifices were stopped by the acharyas who systematized and revived Hinduism. Now at present the Hindu tradition is largely vegetarian. And all over the world people are recognizing the value of vegetarianism because of the substantial ecological problems created by trying to eat meat.

You can refer to the article food for health which is posted below, which give the brief analysis of the problems because of which the world is turning over towards vegetarian food. The Vedic tradition, the Hindu tradition, pioneers in this context. And rather than searching out obscure verses from some Vedic literature to justify ones meat eating. Let us recognize the Vedic tradition, acclaimed vegetarianism right from the beginning. And it was brought into the fore front by Buddhism and now it has become the torch bearer for the rest of the world where the vegetarian alternative is not just the alternative but it is the necessity for the survival of our planet and for the survival of humanity.