Religion and Science has been considered in mutual contradiction since ages. Since the time of The Renaissance, the new aspects of nature and existence that came in notice of the human mind urged him to deny or at least question the authenticity of the doctrines and principles of theologies which used to entwine his actions since the inception of his existence. The unanswered doubts rose to a level so high that he metamorphosed the word “theology” into “mythology”.

Neither the philosopher’s stone turned iron to gold nor the hell and the Elysium found any place in the revolutionary Copernican model of the solar system, and in no time mankind began to reject the authority of any supernatural power governing over creation and existence. The follies of the few incompetent or rather fanatic religious teachers made the picture of religions even more complex and hard to swallow by introducing “the fear of God” in them. Claiming Him “Just but Cruel”
The two offsprings of Mother Fear sprang in no time. Cruelty and Superstition began to crawl the face of the words of Almighty, the latter son being elder and more lethal, it robbed the common man off their consciousness and cruelty sprang in a jiffy in the protective shade of his sibling. Many lives got wasted and the aftermath was sure to follow; the vestige of the fallacy driven holocaust joined forces with those still under “the reign of error” and started to revolt against the atrocities of the newly incorporated doctrines of religion towards those who were defiant to them or too weak to retaliate.

“Atheist” was the new name of the revolutionary minds, partly because they became used to this annotation, thanks to the extremists, and partly because the bold began to consider themselves the same, unaware of the fact that the newly incorporated principles in religion weren’t the integral and intrinsic part of it and that they were against the irrational, and not the words of God.

Science was something that began to explain those things which were considered to be entirely divine in nature earlier. Electromagnetic charges replaced Zeus in the firing of thunderbolts from the sky and meteorology fully explained the actions of Poseidon. Science gave refuge to the rebel minds and relieved them of their tags of atheists but whatever the name, the denunciation of religious authorities was inevitable followed by that of believes, customs and even The Almighty. And soon science was the “New God”.

In this altercation, however, the fact that small bits of rationalism and science itself makes the portrait of theologies clear, got lost in oblivion.

It is well known by all and sundry that all the scientific endeavors are directed towards the finding of an Ultimate single unified theory which could explain us each and every fragment of this mighty creation. From the fruitless endeavors of science to create life through the inanimate to the futility of theories explaining the process of our origin, fiasco is the thing observed so far in this respect. What should be held accountable for these failures? Our intelligence, lack of knowledge or rather our approach? I think the third option will be more likely. We are looking through the wrong side of a broken mirror. It’s not calculations but rectified perspective which is the need of the hour.

Religion and Science aren’t opposite but are two chains of facts mutually anti-parallel. It’s all like the Watson and Crick model of the DNA molecule, having two mutually anti-parallel strands i.e. one strand running in x-y while the other in y-x fashion. These two strands resemble a spiral ladder with nitrogenous bases as half rungs jutting out of each strand and hydrogen bonds holding the strands together and linking the corresponding half rungs.
Here in the religion-science strand ,each nitrogenous base is replaced by a custom in the religion strand while by a fact or phenomenon on the science strand, with the strand of science running in zero to infinite while the religion strand running in infinite to zero direction.

A religious custom when finds a partner on the science strand, is considered valid and is accepted by masses being taken as a Scientific Fact, and no problem arises. Example being “Looking directly towards the sun especially on the day of eclipse had been considered a taboo in ancient religions” and today we know the exact reason behind it. But problems have always arisen whenever a custom is left abandoned by the science strand, and they are named as superstitions without a second thought. But how can we say that we know better? If a corresponding fact isn’t present on the science strand then it doesn’t mean that it’s not in existence; it can also mean that we haven’t illuminated that portion of darkness by our gray matter, therefore it makes no sense to flatly deny it.

As a matter of fact, The Aryans knew the speed of light thousands of years before we even felt the glimpse of its nature. Further the architecture of The Great Pyramid of Giza has always been the cynosure of the modern day scientists. “World is a myth, God is the only truth”, this ancient teaching is partially proved to be correct by the fact that the pigments responsible for the colour of things are colourless themselves . What we perceive as colour isn’t existing in the colourful, rather we are deluded of being in a variegated surrounding by our own eyes. It definitely rings a bell. So,in a sense the ancient religions which were wiped out of the face of earth(unfortunately) in the name of paganism could have been closer to The Real Truth.

The vast realm of theologies didn’t even spared the revolutionists from giving a heed to it, very few know that Sir Isaac Newton was among one of those minds which were fascinated by religious believes, his endeavors of creating a philosopher’s stone isn’t a secret now, followed by a conclusion that his task was partially accomplished, further he also predicted 2060 to be the year observing the ‘day of judgment’, this research entirely based on The Revelations.

As the Chinese proverb says “Don’t curse the darkness – light a candle”, its meaningless as well as fruitless to follow a herd claiming that The Devil resides in darkness (superstitions), rather it’s the fact or The Almighty himself creating that darkness and illuminating that area should be our priority. Never insult anything which you don’t fully understand, rather hope that one day the truth behind it is presented to the world as a way of enlightenment.

After all, darkness is maximum just beneath the candle.

Evolution and Reincarnation from the Vedantic Perspective 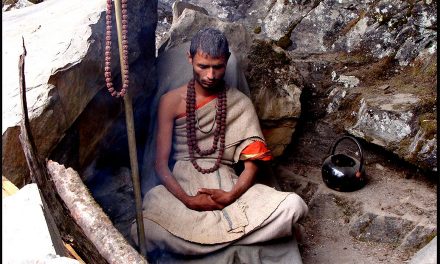 What is Samadhi and Mahasamadhi?