Pilgrimage to the Caves of Paharpani 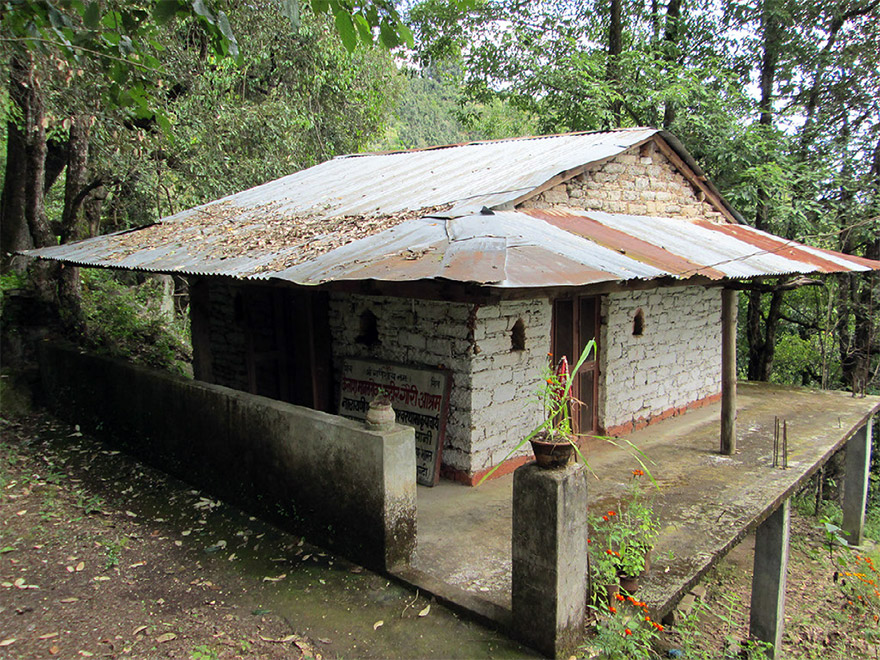 On the evening of Raksha Bandhan, 18th Aug 2005, after visiting the Devidura Mela, where there is a heroic stone-fight in time-honoured tradition, I stopped at Paharpani where I spent a few days in solitude and sadhana, or spiritual practice. Paharpani is within the mighty Uttarakhand Himalaya, at the border of Nainital and Almora districts. Picturesque, its beauty is in its pristine, natural character, on the ancient pilgrim trails. Geographically, it is in the evergreen forests, amidst baj (oak), brus (rhododendron), devadars, chir (pine), kaphal (berry) trees. At a height of 6,500-7,000 feet, it is a valley of fruits – pear, plum, peach, apricot, walnut, lime and orange.

The Himalayan peaks can be viewed at various places nearby, particularly clear during the winter months. From nearby places like Managher – 10 kms away, towards Padampuri on the road to Bhimtal, as well as Motia Pathar 3 km, Punagarh 6 km, Gajaar 7 km, Durganagar 8 km, Sahar Phatak 10 km, Mournaulla 13 km, Airi Deo 18 km, Siddha Beri Chula 26 km and Devi Dhura 40 kms on the road towards Lohaghat, the Himalayan peaks of Nanda Khat, Nandakot, Nanda Ghunti, Nandachuli, Trishuli etc., are seen in all their grandeur. 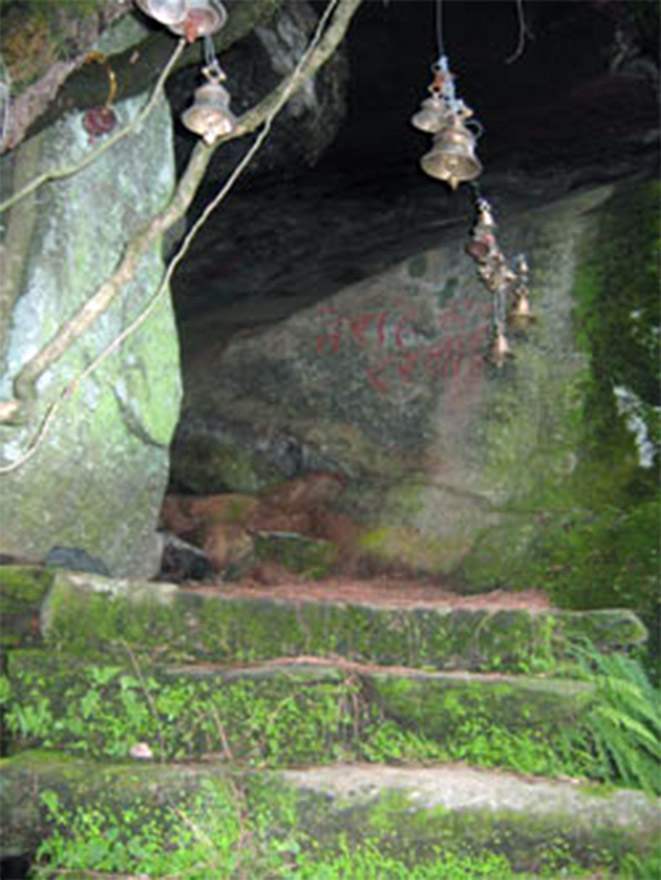 Paharpani is connected to several places of pilgrimage and beauty in the districts of Nainital, Almora and Pithoragarh. Via Almora, onto Karanprayag, it is also possible to go onto the Char Dham of Garhwal: Badrinath, Kedarnath, Gangotri and Yumnotri.

At Paharpani, at a distance of 1 km below the roadhead, is an ancient maha-gufa. It is also known as gupt-gufa, or among the sacred secret caves of the Himalayas. Currently, it is one of Maharishi Gorakh Babaji’s main tapasya-sthals. Nearby is his small kutia and also the yagyasthan where he has held yagyas for the villagers. Since Babaji started spending time here at regular intervals and performed different anusthans for the nearby villagers, the local people are now aware of the gufa. In this mahagufa, there are several caves nearby, which can be used for purposes of intense sadhana. The chief gufa is deep and the path is narrow and perilous. As is customary, locals do not venture beyond the entrance to the mandir from where they offer worship. In the mandir there is a dhuna or sacred firepit, a small idol of Devi, and symbols of Ganesh-ji, Bhairav Nath and a Shiva lingam from Alaknanda, Badrinath, which have been established and spiritually awakened by Babaji. An ancient diya is also at the dhuna. 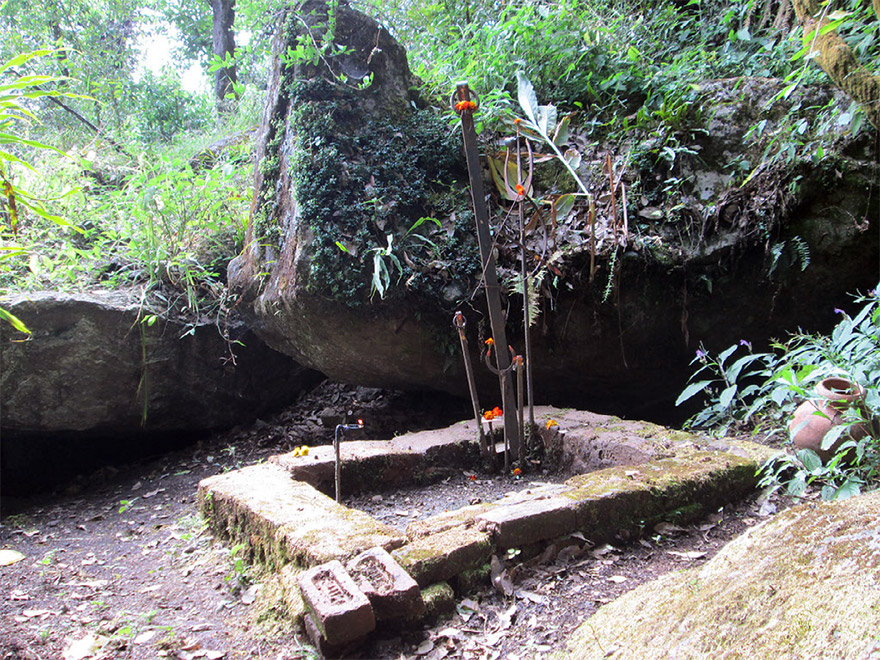 Close to the gufa is Sri Gorakh Babaji’s tapasya-dhuni, called Manasarovar Kailash dhuni. At a dhuni all the deva-devis or the gods and their associated energies, are worshipped in their nirakar swarup or eternal form. Here, five siddhas, Siddha Gorakhnath with Dattatreya, Airi Deva, Gorril Deva, Siddha Sayam Deva and Harjyue Deva have been evoked in sacred siddha worship. Siddha dhunis are graced by Lord Shiva, and his hallowed symbols of protection like the trishul or trident and chimta or sacred tongs stand witness to this. People should not attempt to go near a siddha dhuna, because it is strictly maintained. Even a tapaswi yogi does not enter his own dhuna without awakening the energies within himself.

Next to the main gufa is a cave known as Bagh Gufa or Naga Gufa, because during Sri Gorakh Babaji’s prolonged tapasya there, a bagh or tiger/leopard stayed there, as also a Naga Deva, or sacred snake, protectors of tapaswi yogis during their tapasya kaal or period of intense austerities. It is common for baghs and bhalus or tigers and bears to roam these areas and they are frequently sighted.

Next to the main gufa is a cave known as Bagh Gufa or Naga Gufa, because during Sri Gorakh Babaji’s prolonged tapasya there, a bagh or tiger/leopard stayed there, as also a Naga Deva, or sacred snake, protectors of tapaswi yogis during their tapasya kaal or period of intense austerities. It is common for baghs and bhalus or tigers and bears to roam these areas and they are frequently sighted.

Beside Babaji’s kutia or small hut, there is a large Yogini gufa, where a bagh or leopardess comes to nurture her cubs. Earlier, when Babaji’s kutia did not have doors, in his absence the leopardess and cubs would take shelter there.

In this mahagufa, Mahavatar Haidakhandi Babaji, among other yogis have also done tapasya at a time when this was in the deep dense forests, before there was any village settlement here. Legend claims this was also used by the Pandavas in the days of the Mahabharat.

In the late 19th and early 20th centuries, Haidakhandi Babaji would go on foot from this gufa via Kooni village to the river, Ghatkar, three kms below which later joins the Gautumi Ganga river in the Kumaon Kailash region, through Nain Gaon, onto his cave at Devguru Brihaspati. There is now a road from Paharpani to Mournaulla and onto Bherapani from where there is a 7 km trail to Devguru Brihaspati. From here he would take the trail to Tushrar village, and via Takura, would visit the Siddheshwar Mandir which is also known as Gautam Rishi’s ashram, and then onto Hariakhan where his cave was, from where he became known as Haidakhandi Babaji, by the nearby villagers. 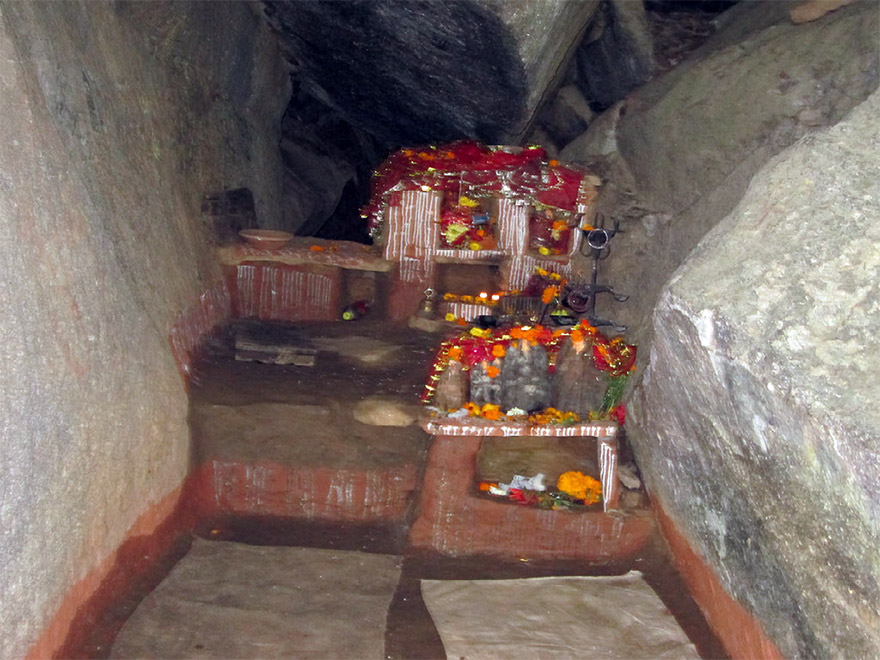 As is spoken of Patal Bhuvaneshwar or the maha-gufa beyond Haat Kalika in Pithoragarh district, which has now been made public by the government and there is a KMVN Rest House nearby, there are supposed to be pathways from Patal Bhuvaneshwar to several places of pilgrimage including Kashi and Hairdwar. So also it is said that there are yogic marg or pathways from the Paharpani gufa which lead to Haridwar, Kumaon Kailash, etc. It must be realised that these margs are for yogis and siddhas, and not for the general public, and come within the mystical realms of Shambala and Gyangunj.

In the sacred tapasya-sthals of the great Himalayan yogis, the ancient traditions are maintained and continue to be revealed to those who seek the wisdom of the sages and have vowed to walk the razor’s edge. There are natural obstacles that create barriers for entry to the uninitiated. It has always been known that the sacred teachings are not causally divulged to the curious. Spirituality has never been sold, there are no advertisements and billboards to attract people, there is no preaching, there are no grand conferences and podiums for orators. The ancient spiritual traditions continue as they always have, in the subtle realms of the spirit.

Back in ‘civilisation’, amidst the glitter and glamour of city lights and the cemented tombs of our modern cities, I often hear the query, are there any ‘real’ sages and saints anymore. I hear the lament that the youth of today is suffering from cultural erosion, bereft of faith and of respect for the ancient knowledge of our Vedic heritage. The truth is that the great saints still walk amidst us, but we cannot recognise them because our vision is of these eyes and our goals are worldly. Truly, we have forgotten our own need for them. 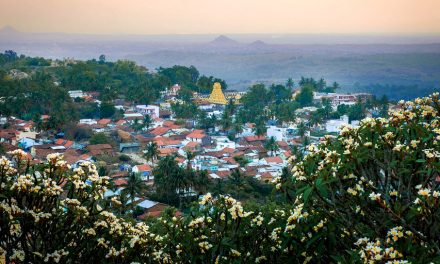 Melukote – The Badrinath of South India