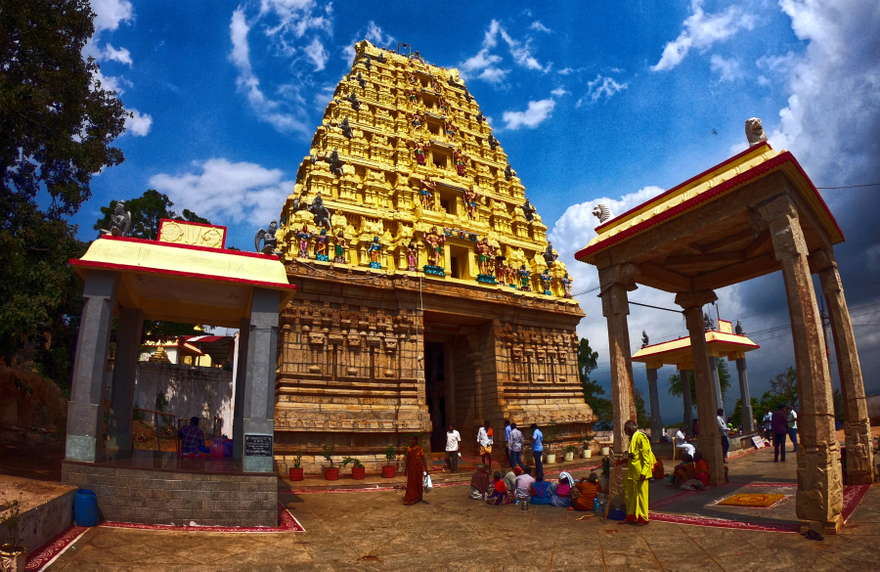 Sri Vedagiri Lakshmi Narasimha Swamy Temple or Narasimha Konda is a Hindu pilgrimage center and the site of an ancient temple dedicated to the Swayambhu Lord Narasimha.

This abode of Sri Vedagiri Lakshminarasimha Swamy Temple lies nestled in the lap of the lush green Vedagiri Hills, on the bank of Pinakini (popularly known as Penna) river, 15 km west of Nellore. 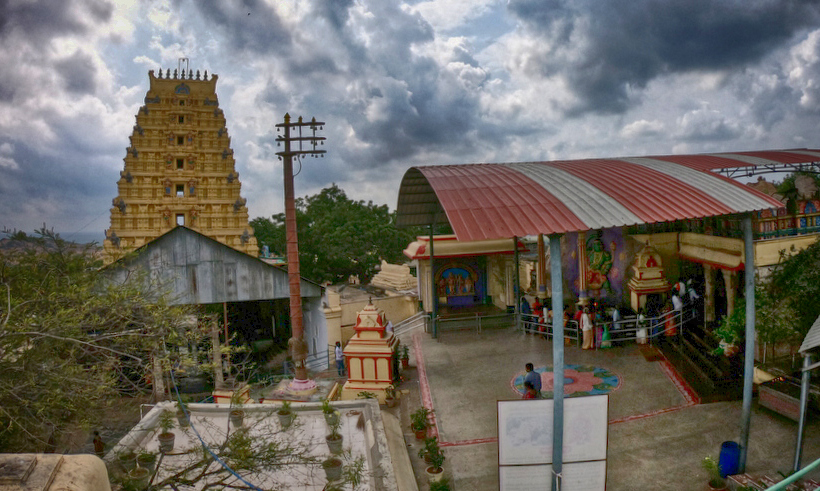 According to legend, in the very distant past, the mountains were blessed with wings and they moved from one place to another freely. Once the Malayagiri Mountain was travelling from Kanyakumari to Himalayas, its four wings fell at different locations on the earth, namely Vedagiri, Yadagiri, Mangalagiri and Nandagiri respectively. The Malayagiri Mountain offered prayer to the Supreme God Vishnu, who blessed the Malayagiri and said that all four wings will transform into places of worship in the future. 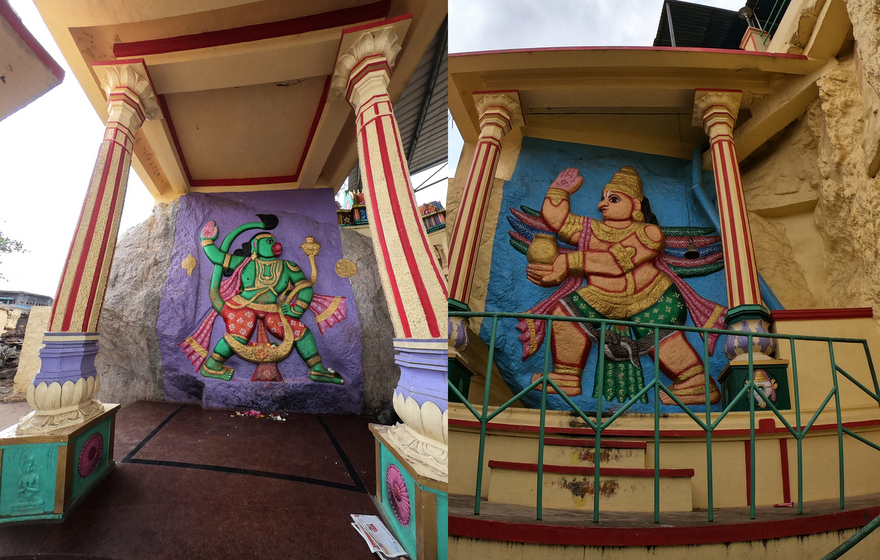 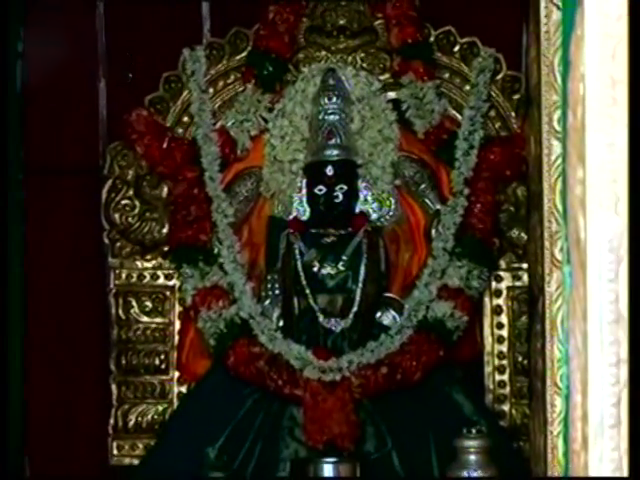 There is also a separate shrine little above the main temple dedicated for Aadi Lakshmi. 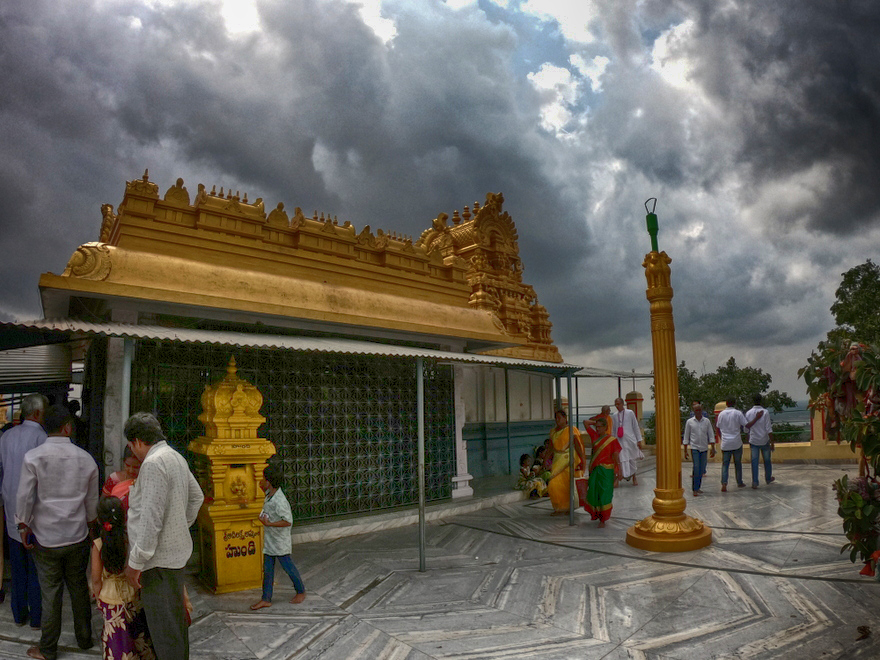 It is believed that according to Brahma Purana on this place Kasyapa rishi (sage) along with another 7 sages called as Saptharishi’s performed 7 Yagna’s on this hill. At the end of this exercise there evolved a divine light and it traveled north towards the hill top and entered the cave where the current Narasimha Swamy temple is situated. The sanctum sanctorum is seen in the shape of the curve. 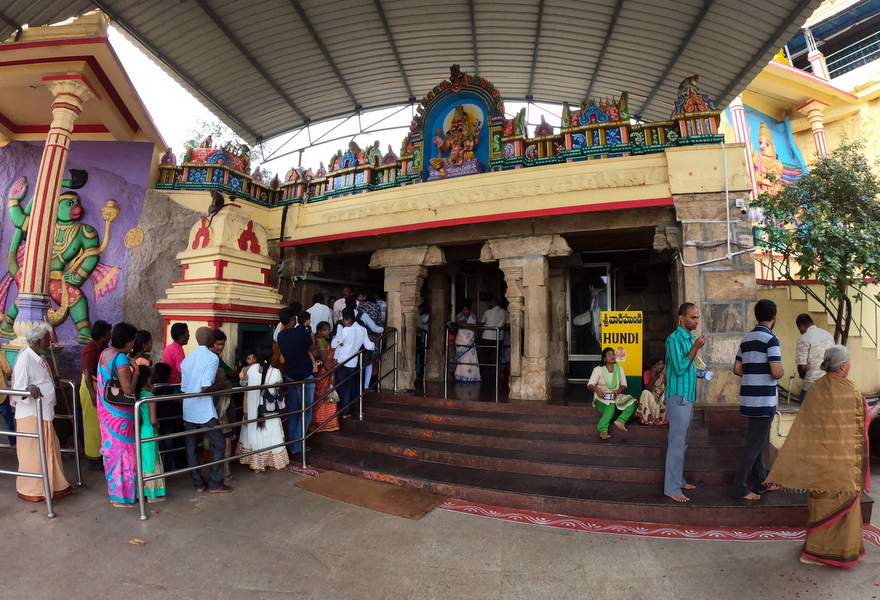 The deity installed at this place is six feet tall with four hands. Two hands symbolizing protection, blessing and other two hands holding Conch and Chakra. 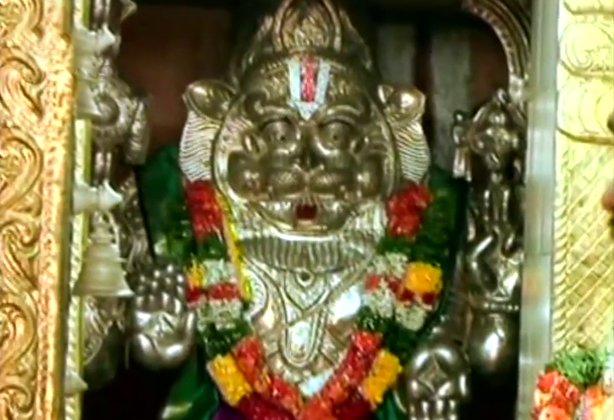 There are 7 ponds, and it is said that these 7 devotional ponds are very powerful. it is also believed that Lord Venkateswara swamy set his foot on this hill. 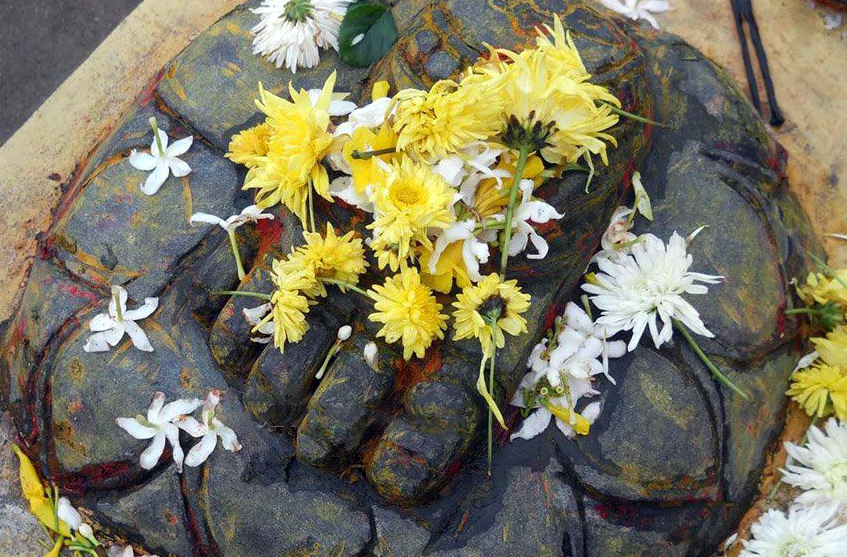 In Ramayanam ( Aranya Kanda ) also it is mentioned that Sri Rama visited this place as part of his sojourn. There are caves here named as ‘Ashwatthama caves”. Ashwatthaama is said to have been cursed by Lord Krishna for killing the sons of Draupadi in the Mahabharata. To get absolved of the sins, Ashwathama is still believed to be living in these caves as an immortal being and observing penance. 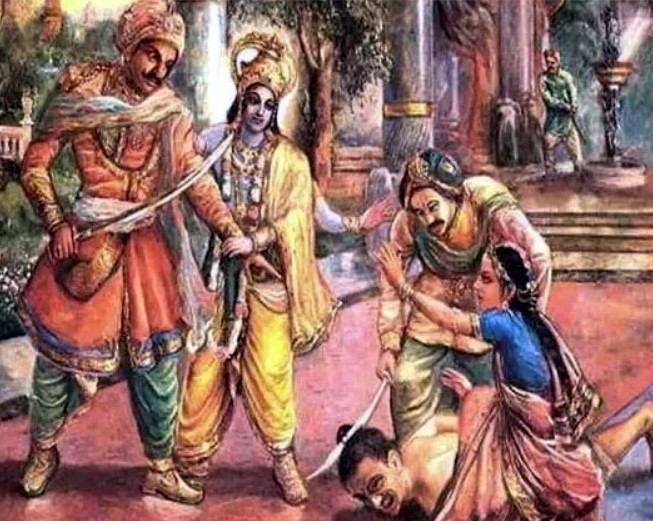 According to rock inscriptions, Narasimhakonda temple was constructed with the patronage of Pallava King Narasimha Varma in the 9th century, around the idol that was installed by sage Kashyapa. Later the temple tower was constructed by Reddy Kings. 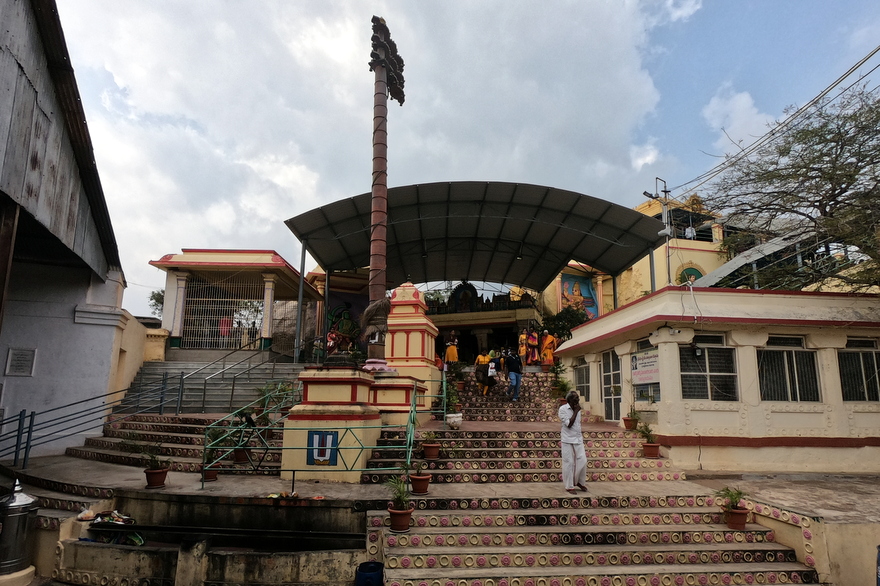 A visit to the abode of Lord Narasimha is memorable with the ‘gali gopuram’ visible to visitors as one enters the verdant forests of Vedagiri. 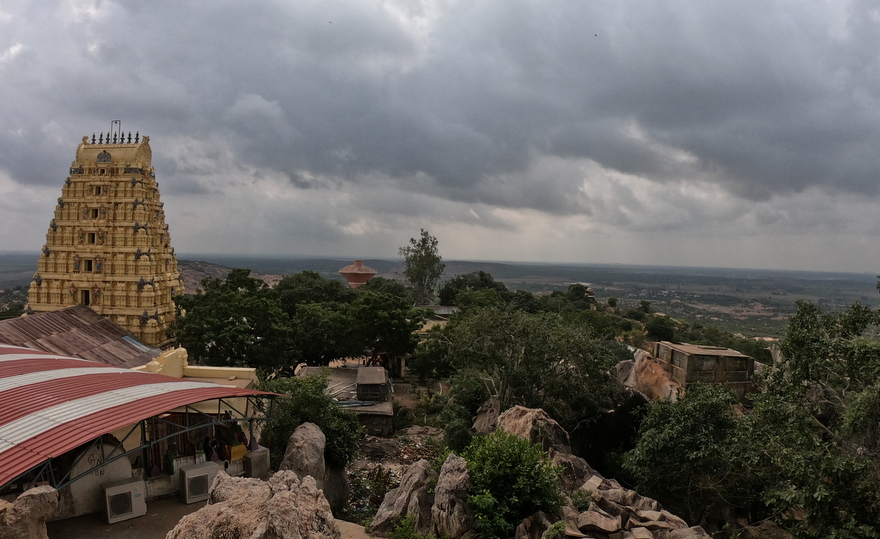 A footpath has been developed with steps stretching over 4 km to enable devotees who are walking to reach the temple atop Narasimha konda. A ghat road has been laid in Vedagiri Hills to reach the hill shrine faster.

Another attraction at Narasimha Konda is to see the wind turbines generating the electricity. 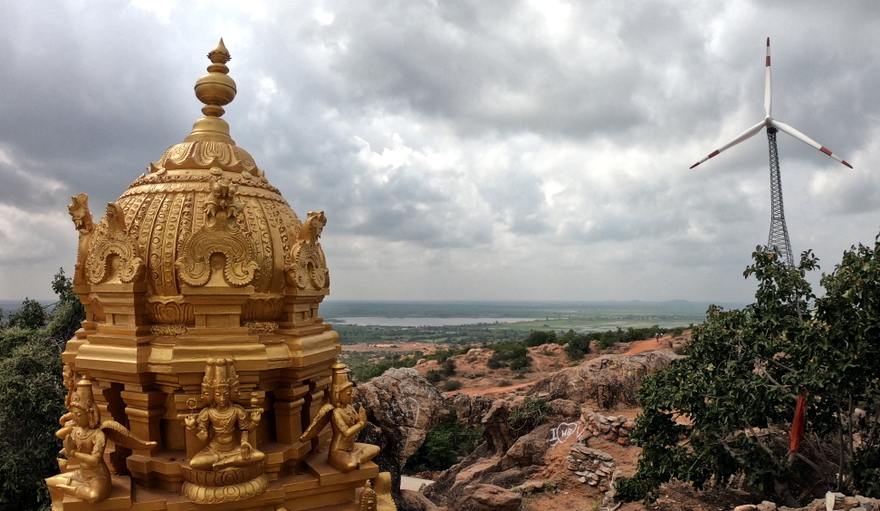 A tree which is believed to grant the boon of begetting children for childless couples is near to the Adi Lakshmi Temple. The women devotees tear a corner of their saree and put their offerings in the piece of cloth and tie it as a swing to the tree. 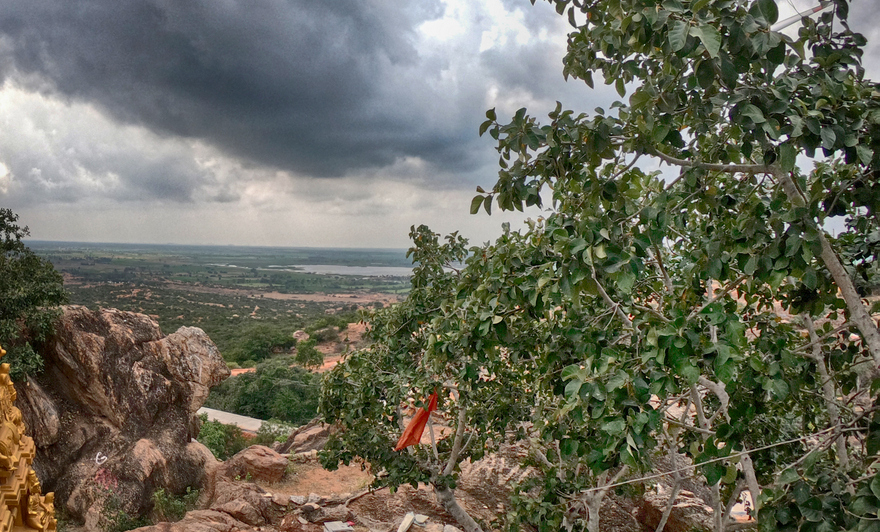 One could also see an underground tunnel beneath tree which once was used by sages as a path to come to the temple and offer their prayers.