Nagas – The Snake Worshippers Were Revered in 26 Countries 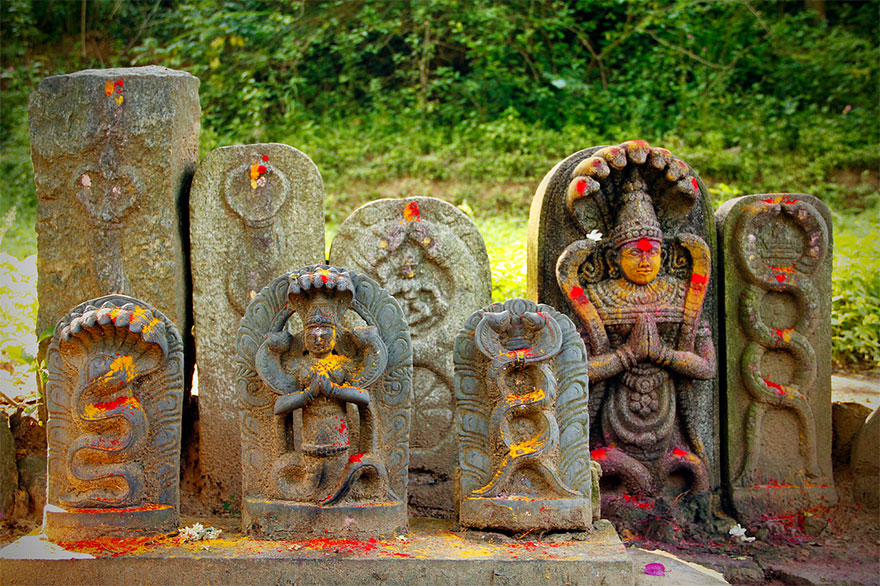 In Genesis the Serpent is a Naga who instructs the new infant (humanity) in what is called the Knowledge of Good and Evil. The Christian church has, unfortunately transformed the Initiate-Teacher into a tempting and negative demon-character.The snake or serpent was worshiped as a representation of the great god,lord Sun, along with fire.

The spiritually advanced and realised people whose Kundalini was awakened were called “Nagas” and this was spread throughout world and so we find snake worship all places in the world even where there are no snakes like Ireland and Tibet.

Many examples of Nagas appear on the walls and along an avenue leading to the temple of Ankhor Wat in Kampuchea (formerly, Cambodia) and also in Buddhist temples in Sri Lanka (formerly, Ceylon.)

1. In the Mahabharata the Naga Kingdom is the territory of a hardy and warlike tribe called Nagas. They were also considered as one of the supernatural races like the Kinnaras.

2. GREECE :Apolloniy Tiansky – contemporary of Jesus Christ, the main representative of new Pythagorean school – had been trained magics by Nagas of Kashmir.

4. CHINA: In China, the Naga is given the form of the Dragon and has a direct association with the Emperor and is known as the “Son of Heaven”. The Chinese are even said to have originated with the Serpent demi-gods and even to speak their language, Naga-Krita.

5. EGYPT: In Egypt the same association is termed “King-Initiate”. 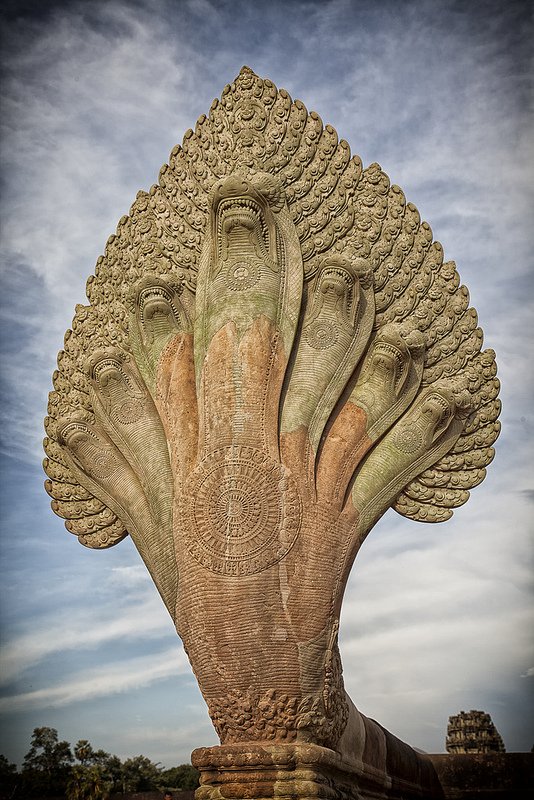 6. TIBET: For a place that has no serpents, Tibet, they are still known in a symbolic sense and are called Lu. Nagarjuna called in Tibetan, Lu-trub.

7. GREECE: In the Western traditions we find the same ubiquity for the Naga, or Serpent. One simple example is the Ancient Greek Goddess, Athena. She is known as a warrior Goddess as well as the Goddess of Wisdom; her symbol being the Serpent as displayed on her personal shield.

8. IRELAND: The serpents was worshipped and deified in Ireland.

9. AFRICA: Africa the chief centre of serpent worship was Dahomey, the cult of the python seems to have been of exotic origin.

10. IRAQ: Ancient Mesopotamians and Semites believed that snakes were immortal

11. ISRAEL: Before the arrival of the Israelites, snake cults were well established in Canaan in the Bronze Age, for archaeologists have uncovered serpent cult objects in Bronze Age strata at several pre-Israelite cities in Canaan: two at Megiddo,one at Gezer, one in the sanctum sanctorum of the Area H temple at Hazor, and two at Shechem.

12. SYRIA : A late Bronze Age Hittite shrine in northern Syria contained a bronze statue of a god holding a serpent in one hand and a staff in the other. 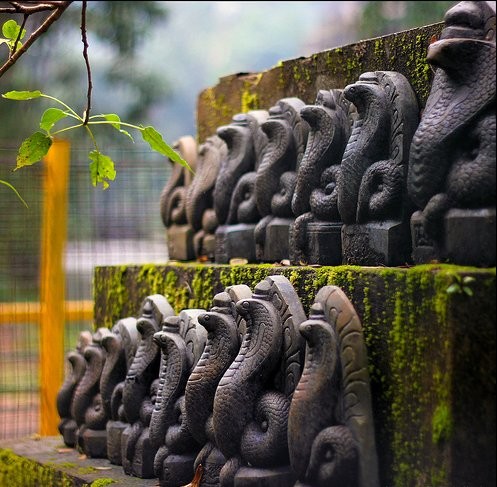 13. MESOPOTAMIA [TODAY’S IRAQ] : In sixth-century Babylon a pair of bronzer serpents flanked each of the four doorways of the temple of Esagila.

15. EGYPT: Ancient Egyptians worshiped snakes, especially the cobra. The cobra was not only associated with Ra, but also many other deities such as Wadjet, Renenutet, and Meretseger. Serpents could also be evil and harmful such as the case of Aapep.

16. GREECE: We learn from Herodotus of the great serpent which defended the citadel of Athens. The Roman genius loci took the form of a serpent. A snake was kept and fed with milk during rites dedicated to Potrimpus, a Prussian god.The oracles of the Ancient Greeks were said to have been the continuation of the tradition begun with the worship of the Egyptian cobra goddess, Wadjet.

17. On the Iberian Peninsula there is evidence that before the introduction of Christianity, and perhaps more strongly before invasions of the Romans, Serpent worship was part of local religion. 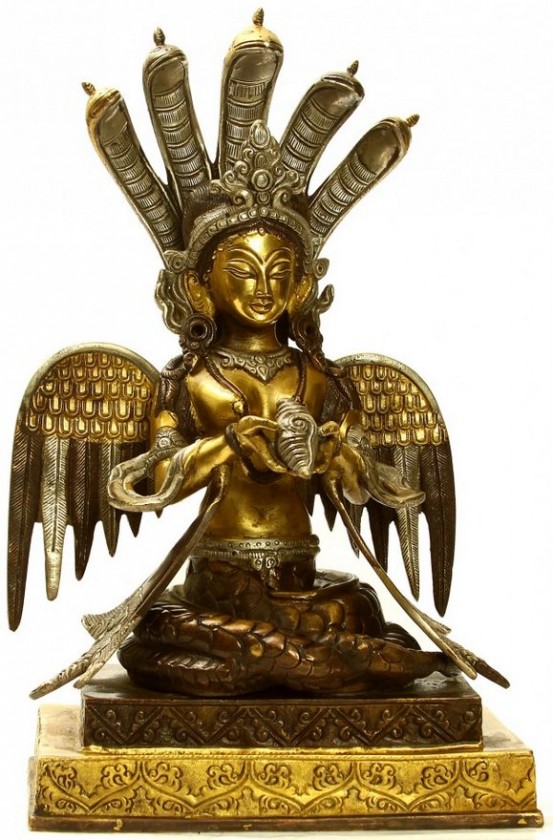 18. AUSTRALIA: In Australia, the Aboriginal people worship a huge python, known by a variety of names but universally referred to as the Rainbow Serpent, that was said to have created the landscape, embodied the spirit of fresh water and punished lawbreakers. The Aborigines in southwest Australia called the serpent the Waugyl, while the Warramunga of the east coast worshipped the mythical Wollunqua.

19. CAMBODIA: An Indian brahmana named Kaundinya came to Cambodia, which at the time was under the dominion of the naga king. The naga princess Soma sallied forth to fight against the invader but was defeated. Presented with the option of marrying the victorious Kaundinya, Soma readily agreed to do so, and together they ruled the land. The Khmer people are their descendants.

20. KOREA: In Korean mythology, Eobshin, the wealth goddess, appears as an eared, black snake. In Jeju Island, the goddess Chilseong and her seven daughters are all snakes.

21. AMERICA: In America some of the Native American tribes give reverence to the rattlesnake as grandfather and king of snakes who is able to give fair winds or cause tempest. Among the Hopi of Arizona the serpent figures largely in one of the dances.

22. AMERICA: The rattlesnake was worshipped in the Natchez temple of the sun and the Aztec deity Quetzalcoatl was a feathered serpent-god.

23. PERU: The tribes of Peru are said to have adored great snakes in the pre-Inca days and in Chile the Mapuche made a serpent figure in their deluge beliefs.

24. COLOMBIA: Lake Guatavita in Colombia also maintains a Cacique legend of a “Serpent God” living in the waters, which the tribe worshiped by placing gold and silver jewelry into the lake.

25. Norse: Jörmungandr, alternately the Midgard Serpent or World Serpent, of the Norse mythology, is the middle child of Loki and the giantess Angrboða.

26. Carvings about 70,000 years old on a snake-like rock in a cave in Botswana indicate that Stone Age people developed religious rituals far earlier than previously believed.