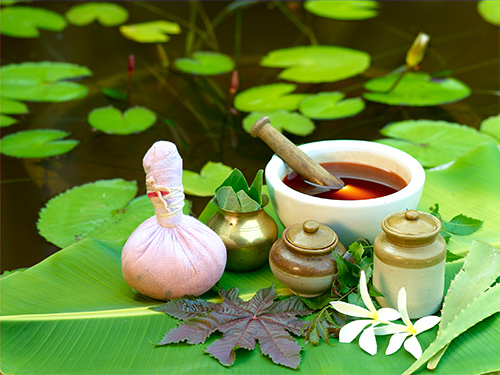 “The Lord in His incarnation of Dhanvantari very quickly cures the diseases of the ever diseased living entities simply by His fame personified and only because of Him do the demigods achieve long lives. Thus the Personality of Godhead becomes ever glorified. He also exacted a share from the sacrifices, and it is He only who inaugurated the medical science or the knowledge of medicine in the universe.” – Bhagavata Purana 2.7.22

From all the authoritative statements of the great sages, the Vedic hymns and the aphorisms of the Vedanta sutra, the components of this world can be understood as follows: First there are earth, water, fire, air and ether. These are the five great elements (maha bhuta).

The color of these five elements are:

The gross body of the living being is made of these five elements, as follows (Bhag. 2.10.31):

The living force (prana) comes from sky, water and air.

The subtle body of the living being consists of Mind (manas), Intelligence (buddhi) and False Ego (ahankara).

A part of material nature, after being initiated by the Lord is known as mahat tattva.

A fractional portion of the mahat tattva is called the false ego.

A portion of the ego is the vibration of sound.

A portion of sound is atmospheric air.

A portion of the airy atmosphere is turned into forms.

The forms constitute the power of electricity or heat.

Heat produces the smell of the aroma of the earth.

Gross earth is produced by this aroma.

All these combined together constitute the cosmic phenomenon.

E) The Modes of Material Nature

Mahat tattva or the great causal truth, transforms into false ego, which is manifested in three phases, cause, effect and the doer. All such activities are on the mental plane and are based on the material elements, gross senses and mental speculation. The false ego is represented in three modes – goodness, passion and ignorance.

F) The Body and the Modes

Death: A Process of Growth

The Ayurveda Tradition in Kerala