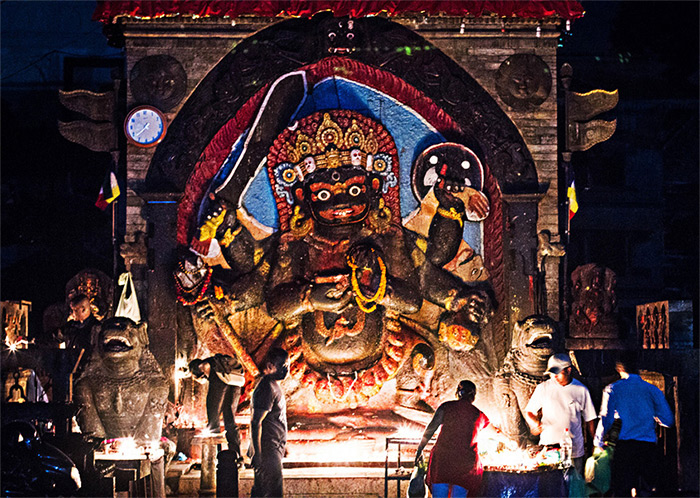 I sing praise of Kala Bhairava, Who is the ruler of the city Kashi, Who is adorned by lotus-feet which is reverred and served by Indra (Devaraj), Who has a Yagya-thread made up of snake, Who has the moon on His forehead, Who is the abode of mercy, Who has been sung by Narad and other celestial singers, and Whose clothes are the directions. ||1||

I sing praise of Kala Bhairava, Who is the ruler of the city Kashi, Who is resplendent like millions of sun, Who absolves the ocean of cycle of rebirth, Who is supreme, Who has a blue neck, Who bestows us with our desires, Who has three-eyes, Who is the end of Kaal, Who has lotus-like eyes, Who has immortal monodent weapon, and Who is immortal. ||2||

I sing praise of Kala Bhairava, Who is the ruler of the city Kashi, Who has monodent, spade, a cord and punishment in His hands, Who is the cause behind the beginning, Who has a grey (smeared) body, Who is the first Deva, Who is imperishable, Who is free from illness and health, Who is immensely mighty, Who is the Lord, and Who loves the special Tandava dance. ||3||

I sing praise of Kala Bhairava, Who is the ruler of the city Kashi, Who is the bestower of desires and salvation, Who has an enticing appearance form, Who is endears His devotees, Who is static, Who takes various manifestations and forms the world, and Who has a beautiful golden waist-thread with small melodious bells. ||4||

I sing praise of Kala Bhairava, Who is the ruler of the city Kashi, Who is the maintainer of righteousness, Who is the destroyer of unrighteous paths, Who liberates us from the ties of Karma or deeds, Who bestows us with shyness, Who is splendid, and Whose organ-groups are decorated with a beautiful cord of golden color. ||5||

I sing praise of Kala Bhairava, Who is the ruler of the city Kashi, Who has feet adorned by two sandals made of gold which is possessing a resplendent shine, Who is eternal, Who is induplicable, Who bestows our desires to us, Who is without desires, Who destroys the pride of death (as in is supreme to death), and Who liberates soul by His teeth. ||6||

I sing praise of Kala Bhairava, Who is the ruler of the city Kashi, Who is the leader of the ghosts and spirits, Who showers immense glory, Who absolves people dwelling in Kashi from their sins and righteous deeds, Who is splendor, Who has explained the path of righteousness, Who is eternally old, and Who is the controller of the universe. ||8||

Those who study these eight verses on Kala Bhairava — which is enticing, which is a source of knowledge and liberation, which increases righteousness of a person, and which destroys grief, attachment, depression, greed, anger an heat — move towards the proximity of the feet of Shiv (Kalabhairav), necessarily. ||9||

Kalabhairava is the God who is the protector of Benares. He is supposed to be the fearsome aspect of Lord Shiva. Once Brahma insulted Lord Shiva and his fifth head teasingly laughed at Lord Shiva. From Lord Shiva came out the Kalabhairava (Black Bhairava) who tore off the fifth head of Lord Brahma.

Another story identifies Kalabhairava with Veerabhadra who cut off the head of Daksha the father of Sathi Devi, when he insulted Lord Shiva. Sathi’s body was cut into pieces and strewn all over India giving rise to Shakthi Peetas. Outside every Shakthi Peeta is the temple for Bhairava.

There is also another interpretation. He is the form of Shiva who controls the growth and management of time. (Kala means time). Whoever wants to spend, manage or ration their time in a proper manner should pray him. He is also considered as the guardian of temples of Lord Shiva. After locking the doors of the temple of Lord Shiva, the keys are ceremonially offered to Bhairava and taken back in most of the Shiva temples.

The Lord Kalabairava wears the tiger skin and human bones and also wears the twisted serpents as his ornaments i.e, earrings, bracelets, anklets, and sacred thread. The celestial vehicle of Lord Bairava is the dog. The number 13 is auspicious for the Lord. The Ashtami (eighth lunar day) thithi of each paksham (moon / lunar phase fortnight), particularly in the waning phase (that is, Krishna Paksha Ashtami), is important for Kalabairava worship. Kala Bhairava Ashtami, which occurs in December/January is an important day for worshipping the Lord. The Siddha secret that the Kuligai time of each day is ideal for worshipping Kala Bhairava.

In Saivite legends and puranas Lord Kalabairava is considered as the Kshetrapalaka or guardian of temples of Lord Shiva. . In honor of this, all Shiva temple management will ceremonially submit the temple keys to Lord Bairava after locking the temple complex at temple closing time and are received from him at opening time. The Lord safeguards the entire temple complex.

The worship of Kala Bhairava is very important for those living in foreign countries. There’s nothing more precious than time. Those who are desirous to spend, manage or ration their time in a proper manner should pray the Lord Kalabairava.

Lord Kalabairava is often presented as a folk deity or Grama Devata who safeguards the devotee on all eight directions (ettu tikku) and hi is also considered as the guardian of travelers. Those who venture travel especially during night time should pray for the blessings of the Lord and seek his protection during travel. The Tamil Siddhas used to instruct the travelers to offer the garland of cashew nuts and light ghee lamp before commencing the travel. Lord Bhairava is also known as Vairavar in Tamil.