Holi (also called Holaka or Phagwa) is an annual festival celebrated on the day after the full moon in the Hindu month of Phalguna (early March). It celebrates spring, commemorates various events in Hindu mythology and is time of disregarding social norms and indulging in general merrymaking.

Holi is probably the least religious of Hindu holidays. During Holi, Hindus attend a public bonfire, spray friends and family with colored powders and water, and generally go a bit wild in the streets.

Holi (also called Holaka or Phagwa) is an annual festival celebrated on the day after the full moon in the Hindu month of Phalguna (early March). It celebrates spring, commemorates various events in Hindu mythology and is time of disregarding social norms and indulging in general merrymaking.

Holi is probably the least religious of Hindu holidays. During Holi, Hindus attend a public bonfire, spray friends and family with colored powders and water, and generally go a bit wild in the streets.

Celebrated all over India since ancient times, Holi’s precise form and purpose display great variety. Originally, Holi was an agricultural festival celebrating the arrival of spring. This aspect still plays a significant part in the festival in the form of the colored powders: Holi is a time when man and nature alike throw off the gloom of winter and rejoice in the colors and liveliness of spring. Holi also commemorates various events in Hindu mythology, but for most Hindus it provides a temporary opportunity for Hindus to disregard social norms, indulge in merrymaking and generally “let loose.”

The legend commemorated by the festival of Holi involves an evil king named Hiranyakashipu. He forbade his son Prahlad from worshipping Vishnu, but Radhu continued to do offer prayers to the god. Getting angry with his son, Hiranyakashipu challenged Prahlad to sit on a pyre with his wicked aunt Holika who was believed to be immune to fire. (In an alternate version, Holika put herself and Prahlad on the fire on orders from her brother.) Prahlad accepted the challenge and prayed to Vishnu to keep him safe. When the fire started, everyone watched in amazement as Holika was burnt to death, while Prahlad survived without a scar to show for it. The burning of Holika is celebrated as Holi. According to some accounts, Holika begged Prahlad for forgiveness before her demise, and he decreed that she would be remembered every year at Holi.

An alternative account of the basis of the holiday is associated with a legend involving Lord Shiva, one of the major Hindu gods. Shiva is known for his meditative nature and his many hours spent in solitude and deep meditation. Madana, the God of love, decided to test his resolve and appeared to Shiva in the form of a beautiful nymph. But Shiva recognized Madana and became very angry. In a fit of rage he shot fire out of his third eye and reduced her to ashes. This is sometimes given as the basis of Holi’s bonfire.

The festival of Holi is also associated with the enduring love between Lord Krishna (an incarnation of Vishnu) and Radha, and Krishna in general. According to legend, the young Krishna complained to his mother Yashoda about why Radha was so fair and he so dark. Yashoda advised him to apply colour on Radha’s face and see how her complexion would change. Because of this associated with Krishna, Holi is extended over a longer period in Vrindavan and Mathura, two cities with which Krishna is closely affiliated.

Krishna’s followers everywhere find special meaning in the joyous festival, as general frivolity is considered to be in imitation of Krishna’s play with the gopis (wives and daughters of cowherds).

Holi is spread out over two days (it used to be five, and in some places it is longer). The entire holiday is associated with a loosening of social restrictions normally associated with caste, sex, status and age. Holi thus bridges social gaps and brings people together: employees and employers, men and women, rich and poor, young and old. Holi is also characterized by the loosening of social norms governing polite behavior and the resulting general atmosphere of licentious merrymaking and ribald language and behavior. A common saying heard during Holi is bura na mano, Holi hai (“don’t feel offended, it’s Holi”).

On the evening of the first day of Holi, a public bonfire is held, commemorating the burning of Holika. Traditionally, Hindu boys spend the weeks prior to Holi combing the neighborhood for any waste wood they can find for the bonfire. The fire is lit sometime between 10 PM and midnight (at the rising of the moon), not generally in an orderly fashion. Everyone gathers in the street for the event, and the air rings with shouts, catcalls, curses and general mayhem.

The central ritual of Holi is the throwing and applying of colored water and powders on friends and family, which gives the holiday its common name “Festival of Colors.” This ritual is said to be based on the above story of Krishna and Radha as well as on Krishna’s playful splashing of the maids with water, but most of all it celebrates the coming of spring with all its beautiful colors and vibrant life.

In Bengal, Holi features the Dolayatra (Swing Festival), in which images of the gods are placed on specially decorated platforms and devotees take turns swinging them. In the meantime, women dance around and sing special songs as men spray colored water at them. 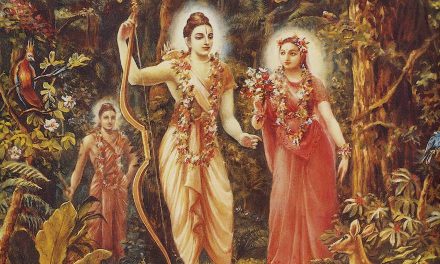