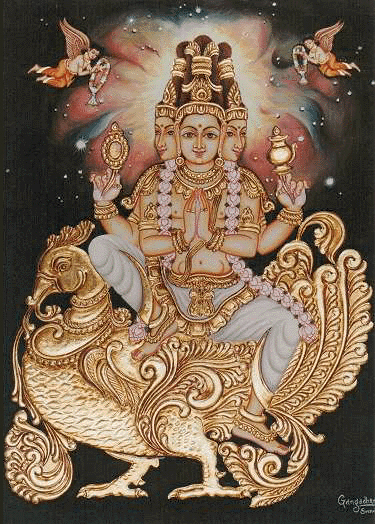 Hamsa (or hansa) is the Sanskrit term for a transcendentally situated swan or goose. Considered by scholars to be either the Mute Swan (Cygnus olor) or the Bar-headed Goose (Anser indicus), the Hamsa is best known and loved as the vahana (sacred carrier) of Lord Brahma and the Goddess Saraswati.

‘Vah’ in Sanskrit means to carry or to transport. The vahana mount may be a bird or animal, or other type of chimera having divine attributes. A particular vahana carrier is closely associated with many deities and demigods. A deity may be iconographically depicted as riding on the vahana, while at other times the vahana is depicted at the deity’s side, or as a symbolical attribute in iconography.

In many texts, Hamsa is extolled as the king of birds. One of the Upanishads explains that a Hamsa is said to possess the sacred knowledge of the Brahman. The Sanskrit word ‘Hamsa’ is cognate with the Latin “anser”, the German “gans” and the English “goose”, and is generally applied to water birds. But unlike mundane winged-ones, the Hamsa is known to eat pearls, and is able to separate milk from water in a mixture of the two.

Hamsa also has special connotations in the monistic philosophy of Advaita Vedanta, which explains that just as the swan lives on water but its feathers are not wetted by water, similarly an Advaitin may to live in this material world full of Maya, but remain unsoiled by its illusionary nature.

The Hamsa are said to reside on Lake Manasarovar in Tibet, from where it migrates to the Indian lakes in the winter. Lake Manasarovar itself is the summer abode of the Hamsa. Poetical images are derived from the flight of these spiritual swans to that lake in the Himalayas.

During Vedic times, there was a strong association between Lord Surya and the Hamsa. With the emergence of the Upanishads, more attributes of Hamsa were described, including its characterization as a symbol of purity, detachment, divine knowledge, cosmic breath (prana) and highest spiritual accomplishment.

The Hamsa transcends the limitations of the material creation around it: it can walk on the earth (prithvi), fly in the sky, and swim in the water. The Hamsa was also used extensively in the art of Gandhara, in conjunction with images of the Buddha, and is therefore deemed sacred in Buddhism.

In view of the association of Hamsa with the transcendental attributes noted above, saints and other sadhus are often given the title of paramhamsa, that is, the supreme Hamsa. This title precedes the name and symbolizes that such a person has reached a very high level of spirituality and emancipation.

The Hamsa represents a perfect union and balance in life. Constant repetition of the word “hamso” changes it to “soaham”, which means “That I am”. Hence the hamsa is often identified with the Supreme Spirit or Brahman. The flight of the Hamsa also symbolizes escape from the cycle of samsara.

In Hatha yoga, the name of of Hamsa is annunciated as ham-sa. When inverted is spoken as sa-ham, which in Sanskrit means the oneness of human and the divine, i.e., union, or ‘yoga’. During pranayama, yogic exercise of breath control, the inhalation is believed sound like ‘ham’, while the exhalation is believed to sound like ‘sa’. Thus, a ‘hamsa’ came to epitomize the ‘prana’, or breath of life.