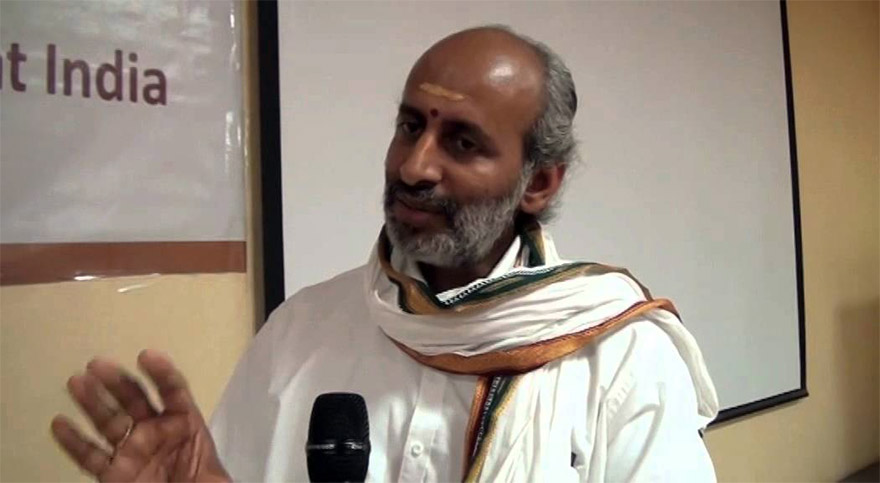 Professor K. Ramasubramanian, son of R. Krishnamurthy Sastri, former Principal of Sanskrit College, Chennai (who was honoured with the President’s award last year) was in the city recently on the occasion of the 900th birth anniversary celebration of the great Indian mathematician of 12th century, Bhaskaracharya. Currently employed in IIT, Mumbai, Prof. Ramasubramanian, a Masters in Physics, delivered a lecture on the ‘Lila of Leelavati’.

I met Prof. Ramasubramanian at his father’s modest home on Sanskrit College Street. The hall was full of pictures of gods and saints, prominent being those of Kanchi and Sringeri sages.

On the lectures he gives at his IIT quarters, he said, “On Saturday and Sunday mornings, I give a talk on Bhagavad Gita, with Sankara Bhashyam. On Monday evenings, I deal with Vairagya Sathakam, since I have completed Neethi Sathakam. On Tuesday evenings, I speak on Adi Sankara’s Satha-sloki Vedanta and on Wednesdays I take up miscellaneous slokas and discourse on Sankara and Sankara Bhashyam. I also talk on Bellangonda Rama Raya’s Ramanuja Bhashya on Advaita Vedanta. Rama Raya is considered not only a great scholar but also a genius. Like Adi Sankara and Vivekananda, he lived only up to the age of 39. On Thursday evenings, I dwell on Narayaneeyam and on Fridays, Viveka Choodamani. This is not a regular crowded lecture, where the audience comes from different places. Many of the listeners, who are Marathi or Telugu speaking, are from IIT’s faculty.”

After his studies in Theoretical Physics in which he got his Ph.D., Ramasubramanian also took an AMIE in Engineering Electronics.

“I studied the Sastras from my father. The examination was conducted in Tenali, Andhra Pradesh. The final viva was in Sringeri and I got the ‘Vidwat Pravara’ title. From my childhood, I loved the language. Immediately after my M.Sc., I took up the Sastra Bhodaka course in Tenali, which was a 14-semester seven-year course.

“I was invited to give a lecture in IIT, Mumbai. After which, I was asked to join the institution! There was no interview. I was directly appointed to the faculty.”

Regarding the lecture he was invited for at IIT, he said, “It was a kind of a workshop on Indian Astronomy on which I gave a talk. The authorities told me that people should know about the contribution of Indian sastras and scriptures in the field of science. They asked me to join them. I returned to Chennai and within a month, the offer letter reached me. That is how I joined IIT Mumbai, in Powai.”

Prof. Ramasubramanian clarified that he is part of the Cell for Indian Science and Technology in Sanskrit and has been helping to bring the science-related materials to the fore.

His job was not only teaching, but also included research and publication work, besides organising and conducting lectures by foreign and Indian scholars and scientists. The books, ‘Yukthi Bhasha’ in two volumes, ‘Thantra Sangraha’ and Introduction to Indian Mathematics and a few more have been published by Springer, U.S. and Hindustan Book Agency, New Delhi. Although ‘Development of Mathematics in India,’ an online course, is over, the text will be out in book form, shortly. His book on ‘Karana Paddati’, a classic text on astronomy is in the pipeline.

Five scholars have already taken their Ph.D. under his guidance and three more are currently doing their research. Their subjects have been Indian Astronomy and Indian Mathematics.

According to Prof. Ramasubramanian, all the mathematical equations were in sloka format in Sanskrit.

“It is easy for people to remember them, because they are in beautiful verse!” he clarified. They have to be correctly interpreted for application. “Our objective is how to make mathematics more interesting and recreational. Otherwise it would be just dry and boring. Once you understand what it conveys, it would inspire you to be creative. If you want to become a leader, you should understand our scientific heritage. Not just the Puranas or Itihasas, but everything – science, maths, technology, etc. That is not known now!” said the professor.

After the first Sanskrit Commission in 1958, the second one was constituted in 2014 to take stock of Sanskrit studies in India, find support areas and improve it to introduce science, based on Sanskrit texts. “We should be very guarded in this aspect. We should not exaggerate anything but at the same time, we should not minimise or reduce its value. We should stay true to the facts, ” he clarified.

He spends a large portion of his earnings for the poor in and around his campus. He is frugal in his eating habits. He spends more time in his office than at home. He goes on global tours for lectures. Kanchi Paramacharya once said that he was on the fast lane to Gnana Marga.

He is also a member of the Europe-based International Union of History and Philosophy of Science, which holds conferences every four years, attended by thousands of scholars and researchers from all over the world.

Before I left, Prof. Ramasubramanian guided me to his backyard where, within 15 days, he had constructed a hall for serving food to devotees, who would assemble during the Sankara Jayanthi Day celebrations conducted there in May. 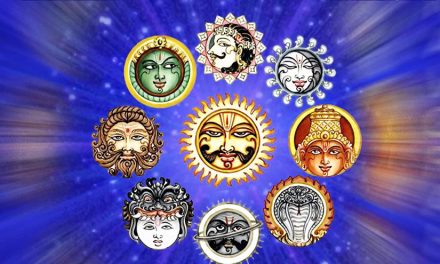 Varahamihira – Sage Who Predicted Water Discovery On Mars 1500 Years Ago