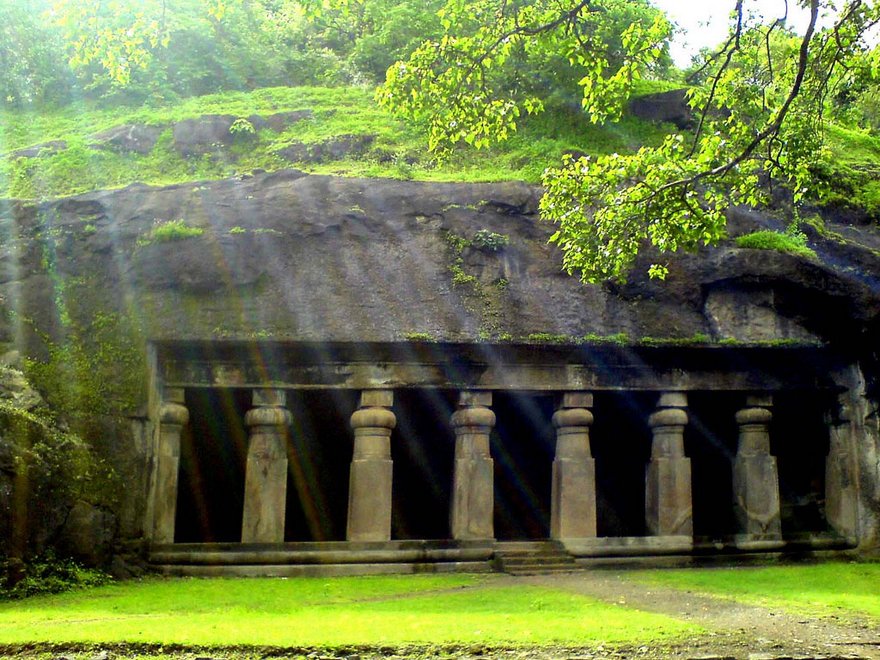 The island of Elephanta, the glorious abode of Lord Shiva and an epitome of Hindu cave culture, consists of seven caves on an island in the Sea of Oman close to Mumbai which, with their decorated temples and the images from Hinduism, bear a unique testimony to a civilization that has disappeared.

Here, Indian art has found one of its most perfect expressions, particularly in the huge high reliefs in the main cave. The island of Gharapuri, the ‘City of Caves’, situated about 10 km from Mumbai on the east side of the harbour, owes its name to the enormous stone elephant found there by Portuguese navigators. This elephant was cut into pieces, removed to Mumbai and somehow put together again. It is today the melancholy guardian of Victoria Gardens Zoo in Mumbai, the great metropolis of Maharashtra State and India’s second city population-wise.

The date of the famous Elephanta Caves is still very much debated and varies from the 6th century to the 8th century according to different specialists. They constitute one of the most striking collections of rock-art in India. There are two groups of caves. To the east, Stupa Hill (thus named because of a small brick Buddhist monument at the top) contains two caves, one of which is unfinished, and several cisterns.

To the west, the larger group consists of five rock-cut Hindu shrines. The main cave is universally famous for its carvings to the glory of Shiva, who is exalted in various forms and act ions. The cave consists of a square plan mandapa whose sides measure about 27 m. 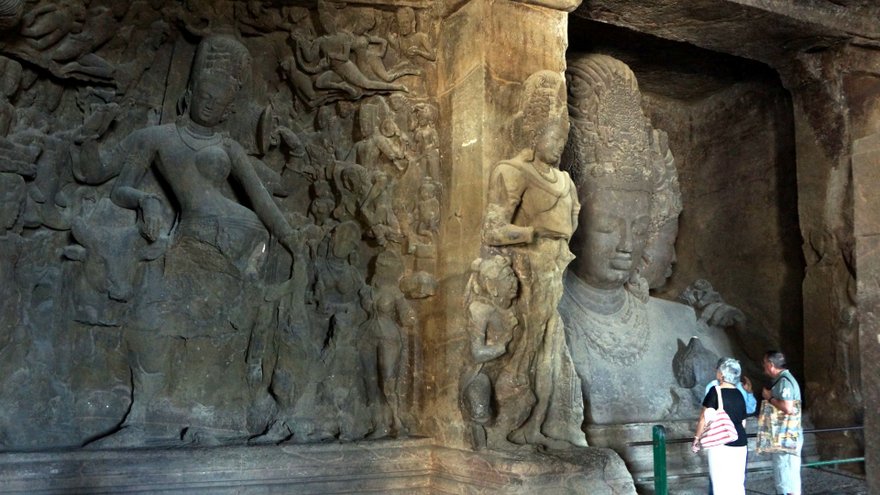 The interior is divided up into smaller areas by rows of supports. The whole shape carefully imitates a building; false profiled beams have been carved in the roof of the cave and the supports, which are complex structures, combine, from bottom to top, the shapes of the pillars, columns and capitals found in bonded stone architecture.

At the very entrance to the cave, to the north of an esplanade reached by a steep flight of steps, the pilgrim or visitor to this high place of Shivaism is greeted by two large carved panels depicting, on the left, Shiva Yogisvara (Master of Yoga) and, on the right, Shiva Nataraja (King of Dance), both treated in a monumental style still close to that of the Gupta period. In a chapel on the right of the entrance stands the cylindrical lingam, symbol of the Supreme Being and principle of all energy. 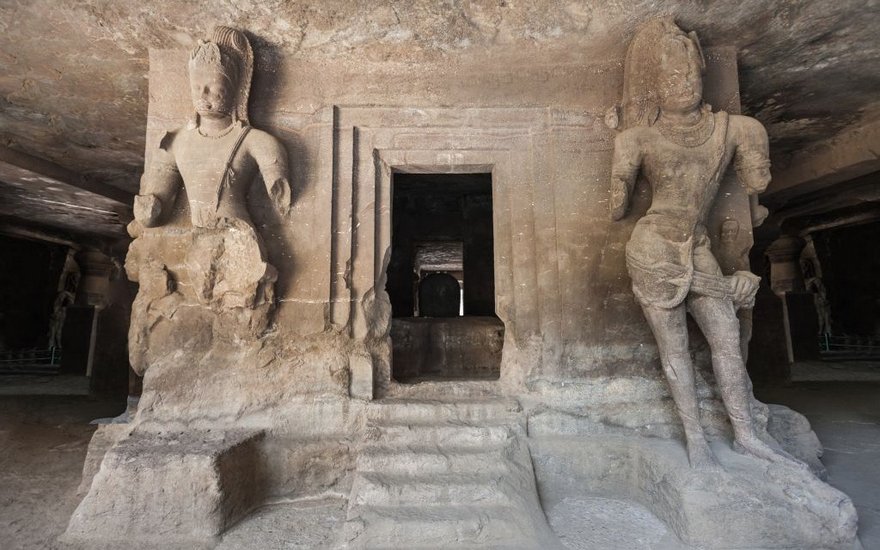 This chapel has four doors, each flanked by colossal figures of dvarapala, those mediator guardians whose task was to admit the faithful and keep out ill-intentioned visitors. On each wall of the mandapa, enormous high-reliefs (maximum height 5.70 m) present further pictures of Shiva. 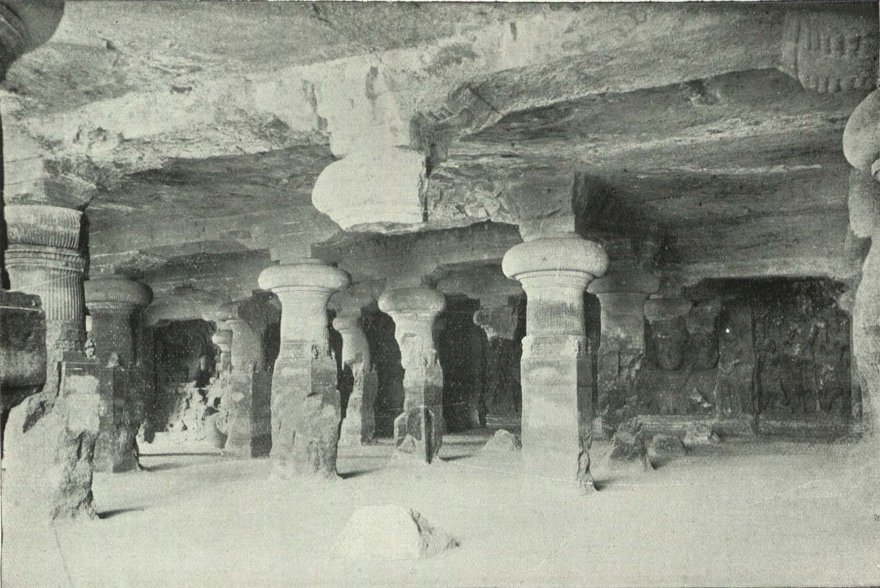 Opposite the entrance, on the south wall, is the famous and unforgettable three-headed bust of the Mahadeva, whose three faces are the incarnation of three essential functions; to the east, Aghora or Bhairava, terrifying destroyer; to the west, Vamadeva, creator of joy and beauty, incarnated by a woman’s head; and in the centre, Tatpurusha, master of positive and negative principles of existence and preserver of their harmony. 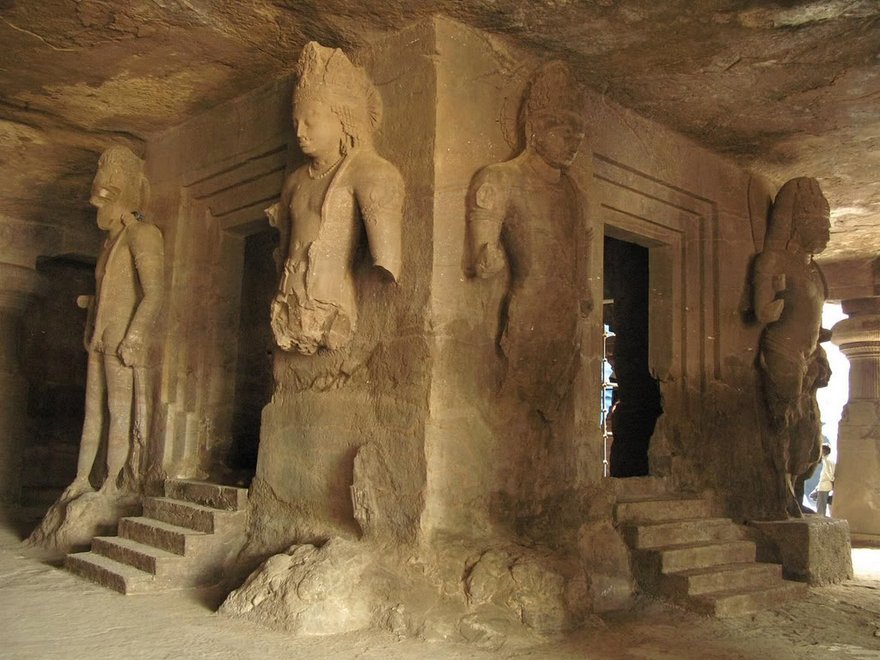 On either side of this central figure there are two other reliefs depicting, on the left, androgynous Shiva (Ardhanarisvara) and, on the right, Shiva receiving the waters of the Ganges (Gangadhara). Ten other reliefs, placed in each angle of the main hall and in the aisles to the east and west, depict further episodes from the legend of Shiva, such as the marriage of Shiva to Parvati, Shiva killing the devil Andhaka, etc. The 15 large reliefs surrounding the lingam chapel in the main Elephanta Cave not only constitute one of the greatest examples of Indian art but also one of the most important collections for the cult of Shiva.

All the archaeological components in the Elephanta Caves are preserved in their natural settings. There is further scope to reveal archaeological material and enhance information by exposing the buried stupas. At the time of the listing the need was noted to safeguard the fragile site from nearby industrial development. Currently, saline activity and general deterioration of rock surface are affecting the caves. Management of the property would be enhanced through the adoption of a Conservation Management Plan to guide restoration and conservation works. 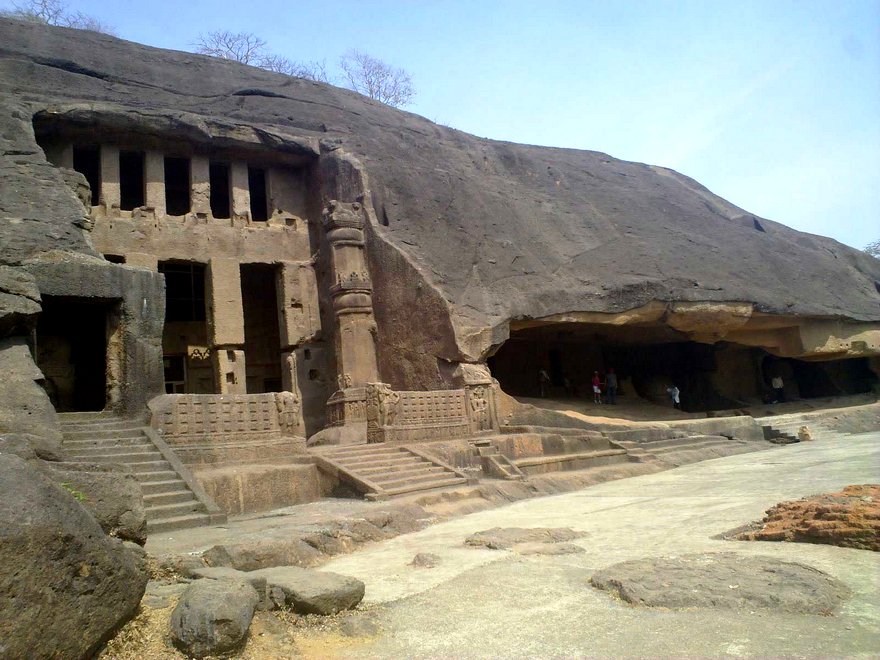 The authenticity of the property has been well maintained since its inscription on the World Heritage List, despite certain repairs on the façade and pillars that have been carried out to ensure the structural stability of the monument. Besides the caves, Elephanta Island possesses archaeological remains from as early as the 2nd century BC and from the Portuguese period, as witnessed, respectively, by stupas buried towards the eastern side of the hillock and a canon located at its top. Moreover, the caves are preserved in the form of monolithic temples, sarvatobhadra garbhgriha(sanctum), mandapa (courtyard), rock-cut architecture, and sculptures. Since inscription, a number of interventions have been made to enhance visitors’ experience and to conserve the site.

The property is protected primarily by the Archaeological Survey of India, which also undertakes the management of the Elephanta Caves with the assistance of other departments, including the Forest Department, Tourism Department, MMRDA, Urban Development Department, Town Planning Department, and the Gram panchayat of the Government of Maharashtra, all acting under the various legislations of the respective departments, such as the Ancient Monuments and Archaeological Sites and Remains Act (1958) and Rules (1959); Ancient Monuments and Archaeological Sites and Remains (Amendment and Validation) Act (2010); Indian Forest Act (1927), Forest Conservation Act (1980); Municipal Councils, Nagar Panchayats and Industrial Townships Act, Maharashtra (1965); and Regional and Town Planning Act, Maharashtra (1966).

Sustaining the Outstanding Universal Value of the property over time will require completing, approving and implementing a Conservation Management Plan to guide restoration and conservation works; addressing saline activity and the general deterioration of the caves’ rock surfaces using internationally recognised scientific standards and techniques; safeguarding the property from nearby industrial development; and considering exposing the buried stupas.

The restoration of some of the pillars that was carried out in 1960s needs to be dismantled and redone as cracks have developed. Additional resources (technical specialist advice) and funding are required to conserve this site and protect the archaeology.